HOW MUCH WOULD WAGES IMPROVE IF WE GOT RID OF 40 MILLION LOOTING MEXICANS? - Domestic Workers' Salaries' Surge As Migrant Labor Declines in Brexit Britain

Starting salaries in Britain are rising sharply as the supply of cheap labour from the EU dwindles — as predicted by Brexit campaigners and even Remain campaign chairman Lord Stuart Rose.

“A sustained upturn in demand for staff and lower candidate availability [has] led to further increases in pay,” found a report by the Recruitment and Employment Confederation (REC).
“Starting salaries rose sharply overall, with the rate of inflation quickening to its second-strongest since November 2015.” 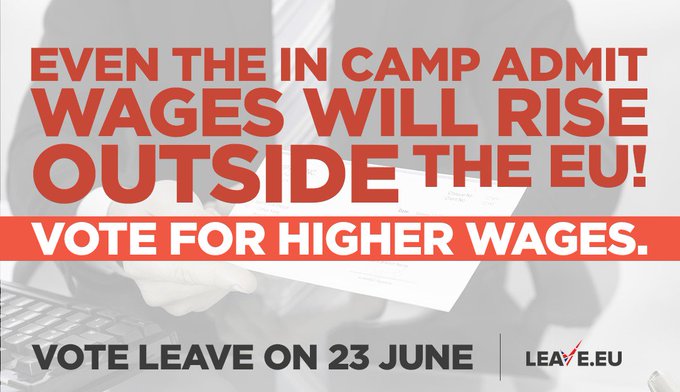 
The REC buried the positive findings beneath a litany of complaints about growth slowing down as a result of business being deprived of the vast labour pool they have enjoyed under the EU’s Free Movement regime — before a reluctant admission that: “For jobseekers, this is good news, as employers are willing to pay higher starting wages to attract the right candidates.”
REC chief executive Kevin Green, who in common with many people representing corporate interests considers any reduction in the pool of low-wage labour a bad thing, said it was urgent that businesses receive “clarity around what future immigration systems will look like. Otherwise, the situation will get worse and employers will face even more staff shortages” — leaving the implication that pay will increase even further to meet the challenge unsaid.

As the supply of cheap labour from the EU dwindles, Scotland has experienced "steep increase" in hiring and salary growth at a 10-month high.
breitbart.com


Andrew Charalambous, the employment spokesman for the UK Independence Party, welcomed the report, telling Breitbart London it contained “much promising news for British workers”.
He added: “Brexit is improving the wages across the board for the working people of the country.
“Growth in permanent staff placements remained robust at the start of the final quarter of 2017 [and] staff vacancies rose sharply for both permanent and temporary employment during October according to the report.”
The UKIP spokesman noted with interest how “the report’s authors have attempted to play down the results, making out that such things are bad. They are not, but they would prefer to believe their anti-Brexit prejudice than the results of their own survey.”
“It is clear that even when there is good news there are those who are desperate to pretend that it is bad.”
The Bank of England is also expecting wages to continue increasing throughout 2018, as employers continue to recruit despite the tight labour market.

MARK ZUCKERBERG AND OTHER TECH BILLIONAIRES SAY HELL NO TO PAYING LEGALS LIVING WAGES… not when there’s boatloads of Chinese ready to take our tech jobs and work cheap!


USCIS Plays Word Games to Ease Costs for H-1B Employers
By David North
CIS Blog, November 3, 2017
https://cis.org/North/USCIS-Plays-Word-Games-Ease-Costs-H1B-Employers
Excerpt: This is about a single example of this behavior, in which U.S. Citizenship and Immigration Service (USCIS) seems to define the law as exactly opposite from what it appears to say. All this can be seen as a small-scale effort to cut employers' costs for H-1B workers and thus (indirectly) to encourage the hiring of more of them. This clearly runs directly counter to the White House's "Hire American" policy.It is another of these cases in which narrow private sector interests get benefits for themselves, while doing hidden harm to the public interest. The U.S. workers hurt by these decisions generally do not know what has been done to them, or are powerless to do anything about it, or both. With the possible exception of this posting, all this is done in virtual secrecy. And, as always, the devil is in the details.

JOBLESS AMERICA: Push 2 for English and go to the front of the line!
95 MILLION AMERICANS (Legals) HAVE NO WORK AS THE BORDERS ARE FLOODED WITH FOREIGNERS SUCKING UP JOBS, WELFARE AND VOTING DEMOCRAT FOR MORE!
http://mexicanoccupation.blogspot.com/2017/11/john-binder-in-era-of-terrorism-and.html

SHOCKING IMAGES OF CARTELS ON U.S. BORDERS:
http://mexicanoccupation.blogspot.com/2017/11/americas-open-borders-with-narcomex.html
“Heroin is not produced in the United States. Every gram of heroin present in the United States provides unequivocal evidence of a failure of border security because every gram of heroin was smuggled into the United States. Indeed, this is precisely a point that Attorney General Jeff Sessions made during his appearance before the Senate Judiciary Committee hearing on October 18, 2017 when he again raised the need to secure the U.S./Mexican border to protect American lives.” Michael Cutler …..FrontPageMag.com
CALIFORNIA: MEXICO’S LOOTED WELFARE STATE
http://mexicanoccupation.blogspot.com/2012/11/california-mexicos-looted-welfare-state.html

Mark Levin: ‘There Is a Big, Ugly Side to Illegal Immigration’

By Jose R. Gonzalez
Thursday on Levin TV, nationally syndicated radio show host Mark Levin warned about the dangers of illegal immigration saying, “There is a big, ugly side of illegal immigration,” Levin said. “There’s all kinds of crimes being committed by people who aren’t supposed to be here.”

Adios, California
A fifth-generation Californian laments his state’s ongoing economic collapse.
By Steve Baldwin
American Spectator, October 19, 2017
What’s clear is that the producers are leaving the state and the takers are coming in. Many of the takers are illegal aliens, now estimated to number over 2.6 million. The Federation for American Immigration Reform estimates that California spends $22 billion on government services for illegal aliens, including welfare, education, Medicaid, and criminal justice system costs. Liberals claim they more than make that up with taxes paid, but that’s simply not true. It’s not even close. FAIR estimates illegal aliens in California contribute only $1.21 billion in tax revenue, which means they cost California $20.6 billion, or at least $1,800 per household.

Nonetheless, open border advocates, such as Facebook Chairman Mark Zuckerberg, claim illegal aliens are a net benefit to California with little evidence to support such an assertion. As the Center for Immigration Studies has documented, the vast majority of illegals are poor, uneducated, and with few skills. How does accepting millions of illegal aliens and then granting them access to dozens of welfare programs benefit California’s economy? If illegal aliens were contributing to the economy in any meaningful way, California, with its 2.6 million illegal aliens, would be booming.
Furthermore, the complexion of illegal aliens has changed with far more on welfare and committing crimes than those who entered the country in the 1980s. Heather Mac Donald of the Manhattan Institute has testified before a Congressional committee that in 2004, 95% of all outstanding warrants for murder in Los Angeles were for illegal aliens; in 2000, 23% of all Los Angeles County jail inmates were illegal aliens and that in 1995, 60% of Los Angeles’s largest street gang, the 18th Street gang, were illegal aliens. Granted, those statistics are old, but if you talk to any California law enforcement officer, they will tell you it’s much worse today. The problem is that the Brown administration will not release any statewide data on illegal alien crimes. That would be insensitive. And now that California has declared itself a “sanctuary state,” there is little doubt this sends a message south of the border that will further escalate illegal immigration into the state.

Indeed, California goes out of its way to attract illegal aliens. The state has even created government programs that cater exclusively to illegal aliens. For example, the State Department of Motor Vehicles has offices that only process driver licenses for illegal aliens. With over a million illegal aliens now driving in California, the state felt compelled to help them avoid the long lines the rest of us must endure at the DMV. And just recently, the state-funded University of California system announced it will spend $27 million on financial aid for illegal aliens. They’ve even taken out radio spots on stations all along the border, just to make sure other potential illegal border crossers hear about this program. I can’t afford college education for all my four sons, but my taxes will pay for illegals to get a college education.
https://spectator.org/adios-california/?
utm_source=American+Spectator+Emails&utm_campaign=6e1b467cf4-EMAIL_CAMPAIGN_2017_10_20&utm_medium=email&utm_term=0_797a38d487-6e1b467cf4-104520165

http://www.judicialwatch.org/blog/2017/09/illegal-immigration-costs-u-s-taxpayers-stunning-134-9-billion-year/
Posted by The Mexican Invasion & Occupation at 7:38 AM