Thursday on MSNBC’s “Hardball,” former Sen. Barbara Boxer (D-CA) said today during his testimony, Supreme Court associate justice nominee Brett Kavanaugh transformed into “someone who you could now see attacking a woman.”
Boxer said, “Let me say, I think it was exhausting for everybody, and especially for women who have had this experience and for women who have had relationships with very angry men. And I think—I’ve listened to your commentary, I think you’re right, all of a sudden we see a man transformed from a choir boy who up until now has said after hours in front of the committee he lived this very perfect life, all of a sudden his anger is triggered and what we saw today is someone who you could now see attacking a woman. It is very frightening.”
She added, “I think your guest, who was so good, and said temperament is so important for who you put on the court. He not only showed the personality transformation. What do I think it will happen? We all know it is a few Republicans that hold this decision on their shoulders. I don’t know anyone who didn’t think that Dr. Ford was credible. And when she said I am 100% sure who this was, I believe her. It’s up to them. Do they believe her? And the last point I’ll make is if you are undecided, there is only one independent investigation, a FBI background check and frankly anyone who doesn’t support that doesn’t want to get to the truth and that includes Judge Kavanaugh.”
Follow Pam Key on Twitter @pamkeyNEN

You know how stinking in corruption this government is if DIANNE FEINSTEIN hasn't been put away!

WAR PROFITEER and her DADDY WARBUCKS

Today, he got his chance to tell her exactly what he thinks of her despicable conduct:

KAVANAUGH to FEINSTEIN: "My family has been destroyed Senator" 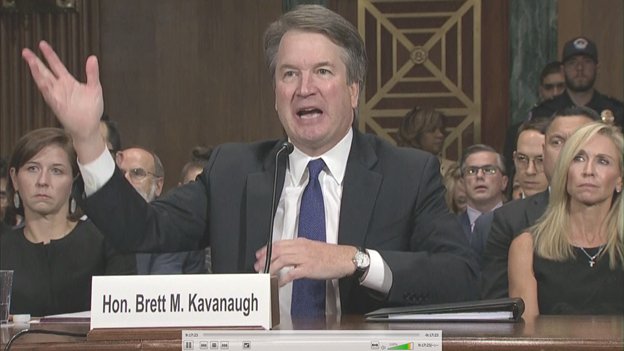 "I’ll do whatever the committee wants," says Kavanaugh, asked by @SenFeinstein why he isn't calling for the FBI to investigate the allegations against him. "My family’s been destroyed by this, Senator." "Destroyed," he repeats. "I’m all in immediately," he says angrily.


You seriously need to watch this: 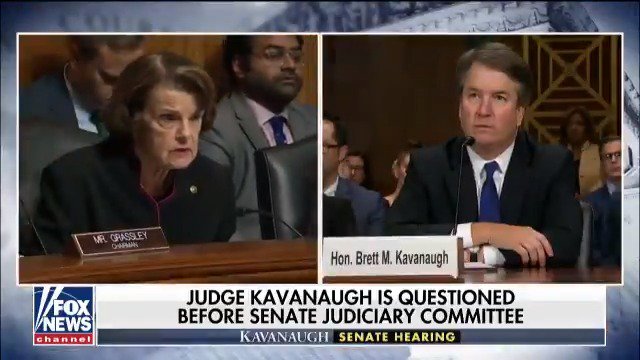 .@SenFeinstein: "If you're very confident of your position, and you appear to be, why aren't you also asking the FBI to investigate these claims?"

Judge Kavanaugh: "Senator I'll do whatever the committee wants. I wanted a hearing the day after the allegation came up." 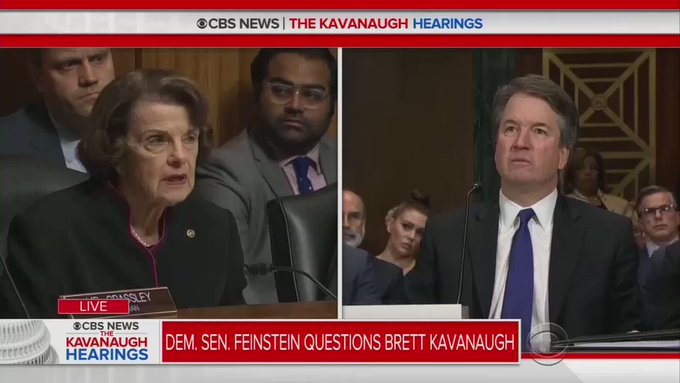 Here's the video from the part of the Brett Kavanaugh-Dianne Feinstein exchange that everyone's tweeting about. Wowza #KavanaughHearings


Wowza, indeed. Dianne Feinstein fully revealed herself to be the lying, corrupt maggot we’ve always known her to be.

Feinstein: “When we get an allegation …” YOU APPARENTLY SIT ON IT FOR SIX WEEKS.

Feinstein sat on the allegation for two months.

Dianne Feinstein talking about how these allegations were handled is RICH. RICH.


Kavanaugh was absolutely right to call Feinstein out.

Good on Kavanaugh to attack Feinstein and her BS argument.

That was an important moment.

Diane Feinstein really struggled to get through that 5 minutes, boy that was painful.

Replying to @politicalmath
Feinstein did not come out well from that exchange.

Is it me or does Feinstein appear to regret this?


It’s definitely not just you.

Ha Feinstein got her ass handed to her.

Replying to @SethAMandel
He destroyed her.

Kavanaugh destroyed Feinstein. It was ugly and deserved.


Agreed. It couldn’t’ve happened to a nicer gal.

Replying to @Neoavatara @SethAMandel
A crimson stain on the pavement.

I hope Kavanaugh does to every Democrat what he just did to Feinstein.

Senators on the Judiciary Committee on Thursday morning will question Supreme Court nominee Brett Kavanaugh and Christine Blasey Ford, the Northern California psychology professor who has accused Kavanaugh of sexual assault when they were teenagers.

Ford will testify first, followed by Kavanaugh. Senators will have five minutes to question Ford and then Kavanaugh. Some Republican Senators are expected to yield their time to Rachel Mitchell, the Arizona prosecutor Senate Republicans hired to help them question Ford. Some Democrats could yield some of their time to Sens. Kamala Harris (D-CA), Amy Klobuchar (D-MN), and Mazie Hirono (D-HI) to question Kavanaugh.
Stay tuned to Breitbart News for live updates. All times eastern.
—
7:20 PM:

HIGH DRAMA: Flake, Collins, Murkowski and Manchin - the senators who will determine whether Brett Kavanaugh gets a lifetime seat on the Supreme Court - are privately huddling NOW. @tedbarrettcnn

Judge Kavanaugh showed America exactly why I nominated him. His testimony was powerful, honest, and riveting. Democrats’ search and destroy strategy is disgraceful and this process has been a total sham and effort to delay, obstruct, and resist. The Senate must vote!

Just now during this break, Hill staffers are conveying GOP plans to press ahead with vote on Kavanaugh in committee tomorrow & confirm him on floor in next couple days. We need to call their senators & invade their offices tomorrow or Kavanaugh is getting onto the Court


6:48 PM: Cornyn says Republicans will meet at 7:15 PM and see where they are. He says it’s time to vote because more false and scurrilous allegations could come forward if the process is further delayed.
6:45 PM:

Someone is doxxing GOP senators on a computer from the House of Representatives, began shortly after the Graham speech. I'm not going to retweet the account where this is posted.


6:42 PM: Kennedy asks Kavanaugh if he believes in God. Kavanaugh says he does. Kennedy says he wants to ask Kavanaugh before God and country a chance to answer questions about the allegations.
Kennedy asks if Dr. Ford’s allegations are true. Kavanaugh responds:  “They are not accurate as to me.”
He asks if Ramirez’s allegations are true. Kavanaugh: “They are not.”
He asks about Swetnick’s allegations. Kavanaugh says “Those are not” true.
Kavanaugh swears to God all the allegations are false.
6:41 PM: Flake now questioning Kavanaugh. Flake says this is not a good process but “it’s all we got.” He apologizes to Kavanaugh’s and Ford’s families for what they’ve had to go through. Flake says people involved in the process should have more humility. He says there is likely going to be as much doubt as certainty once the Senators leave the room.
6:35 PM: Harris gets to the point and asks whether he has taken a professional polygraph test. Establishes that Kavanaugh has not. Now on to asking about FBI background investigations. She asks: “Are you willing to ask the White House to conduct an investigation by the FBI” to get to the bottom of the allegations made against you? She says she’ll take his answer as a no. Harris says he and Gorsuch have similar backgrounds but there were no sexual assault allegations against Gorsuch. 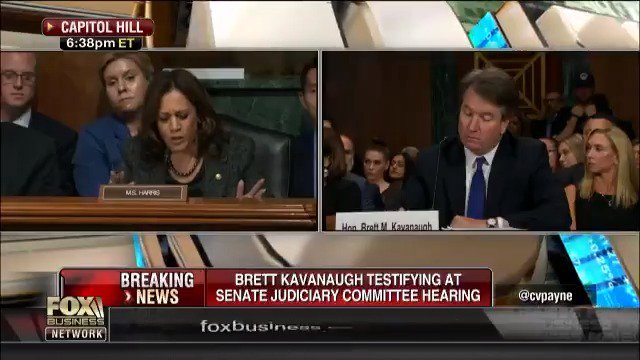 .@KamalaHarris : "You characterize these allegations as a conspiracy directed against you... Justice Neil Gorsuch was nominated by this president. He was considered by this body just last year... The only difference is you have been accused of sexual assault."

Posted by The Mexican Invasion & Occupation at 8:01 AM