Life expectancy in the United States continued its extraordinary decline in 2017 after stagnating in 2016 and falling in 2015. Not since the combined impact of World War I and the Spanish Flu in 1918 has the country experienced such a prolonged period of decline in life expectancy.
The annual mortality report from the Centers for Disease Control (CDC) highlights the disastrous impact of the social crisis on the American working class. Suicides and drug overdoses, what have been termed deaths of despair, have been identified as the driving forces behind the continuing decline in how long Americans are expected to live. 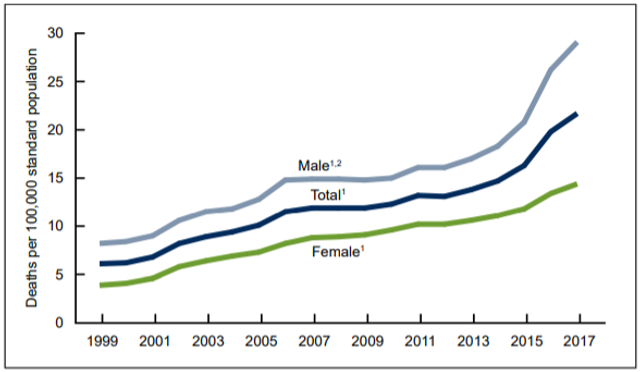 Age-adjusted drug overdose death rates: United States, 1999–2017
In 2017, over 2.8 million Americans died, an increase by approximately 70,000 from the previous year and the most deaths in a single year since the US government began keeping records. From 2016 to 2017, the age-adjusted death rate for the entire population increased by 0.4 percent.
The average life expectancy in the US declined from 78.7 to 78.6 years. Life expectancy dropped for males from 76.2 to 76.1 but remained the same for females at 81.1. Life expectancy for females has consistently been higher than males and the gap continues to widen. In 2017, the difference in life expectancy between females and males increased 0.1 year from 4.9 years in 2016 to 5.0 years in 2017.
Age-specific death rates between 2016 and 2017 increased for age groups 25–34, 35–44, and 85 and over. These statistics indicate a healthcare system failing the elderly and a societal crisis ravaging younger workers. Deaths of despair, including alcoholism, are a leading cause of deaths in younger ages groups. 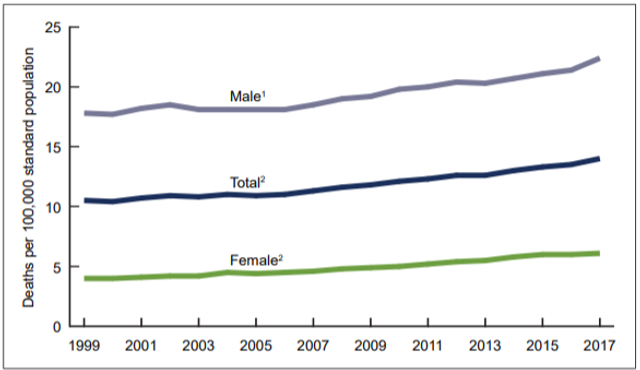 Age-adjusted suicide rates, by sex: United States, 1999–2017
The study also focuses on suicide in depressed rural regions. In 1999, the suicide rate in rural counties was 1.4 times the rate of most urban areas. The rate in rural areas was 13.1 per 100,000 with urban areas having a rate of 9.6 per 100,000. The difference further increased in 2017 with the suicide rate for the most rural counties (20.0 per 100,000) increasing to 1.8 times the rate for the most urban counties (11.1).
The rate in drug overdoses has skyrocketed in the same period. From 1999 to 2017, the overdose rate soared from 6.1 per 100,000 to 21.7 per 100,000. The rate increased by an average of 10 percent per year from 1999 to 2006, by 3 percent per year from 2006 to 2014, and a staggering 16 percent per year from 2014 to 2017. The rise coincides with the opioid crisis ravaging through parts of the US, concentrated in West Virginia, Ohio and Pennsylvania.
The figures contained in the latest CDC report are a reflection of the diseased nature of American society and the failure of the capitalist system. The last decade has seen a historic rise in social inequality in the aftermath of the economic crash of 2008 and the bailout of Wall Street, overseen by Obama and the Democrats, which saw the greatest transfer of wealth in history from the working class to the rich.
Low-wage, tenuous employment, where it is available, has replaced the jobs that were destroyed in the process. The boondoggle that is known as Obamacare, far from providing the population with healthcare, has funneled billions of dollars to the healthcare industry and increased corporate profits by compelling workers to buy substandard health insurance out of their own pocket. 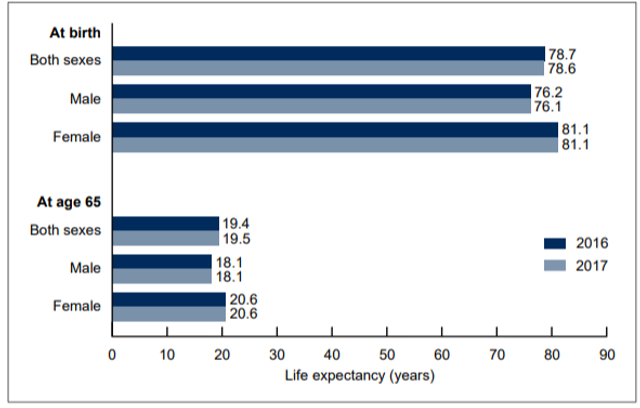 Life expectancy at selected ages, by sex: United States, 2016 and 2017
CDC director Robert R. Redfield lamented over the implications of his organization’s report: “The latest CDC data show that the US life expectancy has declined over the past few years. Tragically, this troubling trend is largely driven by deaths from drug overdose and suicide,” he said in a press release.
“Life expectancy gives us a snapshot of the Nation’s overall health and these sobering statistics are a wakeup call that we are losing too many Americans, too early and too often, to conditions that are preventable.”
As indicated by the prevalence of suicide in rural regions, joblessness and social isolation reap a terrible toll. Workers are driven to despair under the ruling class assault against the living standards won by the working class in the 20th century.
There is no solution to the continued decline in life expectancy forthcoming from the ruling class. In reality, the increased death rates are seen as the cost of doing business, necessary to funnel ever greater sums of money into the pockets of robber barons like Jeff Bezos and fuel unprecedented spending on the US military.
A socialist response is required to meet the needs of the working class. A direct assault must be launched on the wealth of the corporate and financial elite. The wealth of the one percent must be expropriated to fund universal healthcare and turn the giant pharmaceutical companies into publicly-owned utilities.
The decades-long campaign to strip workers of their social gains must be reversed. Society must be transformed to ensure that every person has access to high quality healthcare, education and housing, and ensure the right to a high-paying job and leisure. Above all, this requires the building of a mass working class movement independent of both big business parties, fighting for socialism.

The Washington-imposed economic policy of economic growth via mass-immigration shifts wealth from young people towards older people by flooding the market with foreign labor. That process spikes profits and Wall Street values by cutting salaries for manual and skilled labor offered by blue-collar and white-collar employees. The policy also drives up real estate prices, widens wealth-gaps, reduces high-tech investment, increases state and local tax burdens, hurts kids’ schools and college education, pushes Americans away from high-tech careers, and sidelines at least 5 million marginalized Americans and their families, including many who are now struggling with opioid addictions.

Pain Killer: An Empire of Deceit and the Origin of America’s Opioid Epidemic (Expanded and Updated Edition)

Dopesick: Dealers, Doctors, and the Drug Company That Addicted America

American Fix: Inside the Opioid Addiction Crisis—and How to End It

The left is shrieking about President Donald Trump committing “war crimes” at the border by using tear gas to disperse a mob of violent migrants, while the media try very hard to keep anyone from remembering the sainted Barack Obama repeatedly did the same thing. All of these hysterics are curiously silent about thereal chemical weapons attack perpetrated at the U.S. border: the fentanyl epidemic.

A NATION DIES OF OPIOID ADDICTION

“The drug epidemic is the product of capitalism and the policies of the capitalist parties, both Democrats and Republicans. There is, first of all, the role of the pharmaceutical companies, which have amassed huge profits from the deceptive marketing of opioid pain killers, which they claimed were not addictive. Prescriptions for opioids such as Percocet, Oxycontin and Vicodin skyrocketed from 76 million in 1991 to nearly 259 million in 2012. What are the numbers and profits now?

“It will more likely come on the heels of economic dislocation and dwindling wealth to redistribute.”
http://mexicanoccupation.blogspot.com/2018/07/as-billionaires-plunder-economy-howl.html

“Our entire crony capitalist system, Democrat and Republican alike, has become a kleptocracy approaching par with third-world hell-holes.  This is the way a great country is raided by its elite.” -- Karen McQuillan  THEAMERICAN THINKER.com

"The kind of people needed for violent change these days are living in off-the-grid rural compounds, or the “gangster paradise” where the businesses of drugs, guns, and prostitution are much more lucrative than “transforming” America along Cuban lines." BRUCE THORNTON

There can be no resolution to any social problem confronting the population in the United States and internationally outside of a frontal assault on the wealth of the financial elite.

The political system is controlled by this social layer, which uses a portion of its economic plunder to bribe politicians and government officials, whether Democratic or Republican.

Every CEO in every company sees the business opportunity: Will I earn higher profits by replacing my American staff with cheaper H-1B workers? The answer is an obvious yes.
The Washington-imposed economic policy of economic growth via mass-immigration shifts wealth from young people towards older people by flooding the market with foreign labor. That process spikes profits and Wall Street values by cutting salaries for manual and skilled labor offered by blue-collar and white-collar employees. The policy also drives up real estate prices, widens wealth-gaps, reduces high-tech investment, increases state and local tax burdens, hurts kids’ schools and college education, pushes Americans away from high-tech careers, and sidelines at least 5 million marginalized Americans and their families, including many who are now struggling with opioid addictions.

American middle-class is addicted, poor, jobless and suicidal…. Thank the corrupt government for surrendering our borders to 40 million looting Mexicans and then handing the bills to middle America?
http://mexicanoccupation.blogspot.com/2017/11/princeton-scholars-opioid-crisis.html

“While drug distributors have paid a total of $400 million in fines over the past 10 years, their combined revenue during this same period was over $5 trillion.”

“Opioids have ravaged families and devastated communities across the country. Encouraging their open use undermines the rule of law and will do nothing to quell their continued abuse, let alone the problems underlying mass addiction.”

Posted by The Mexican Invasion & Occupation at 8:03 AM