McALLEN, Texas – Federal authorities are offering a reward for a man tied to Mexico’s Gulf Cartel for his alleged roles in various murders, kidnappings, and home invasions in South Texas. The fugitive, believed to be in Mexico, is also wanted on various trafficking charges for reportedly moving drugs from the Texas border to Fort Wayne, Indiana.

This week, the FBI announced a $25,000 reward for information leading to the capture of 47-year-old Juan Alberto “A-1” Mendez, a man described as an associate of the Gulf Cartel. He is involved in a large-scale racketeering indictment. Mendez is considered a high-risk fugitive still working with the criminal organization. 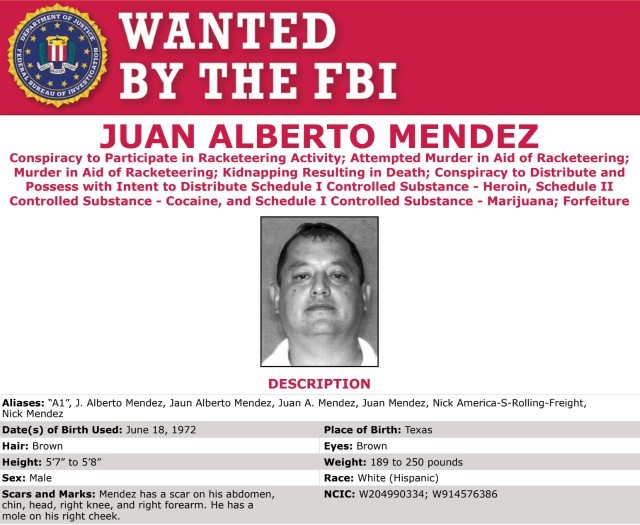 “We have reason to believe that Mr. Mendez is could be in Playa Del Carmen, Cancun, Monterrey, or Reynosa,” FBI Special Agent in Charge Chris Combs told Breitbart News, adding that the reward is also available to individuals in Mexico. “Someone out there knows where he is, we hope that this gives them 25,000 reasons to call the FBI.” 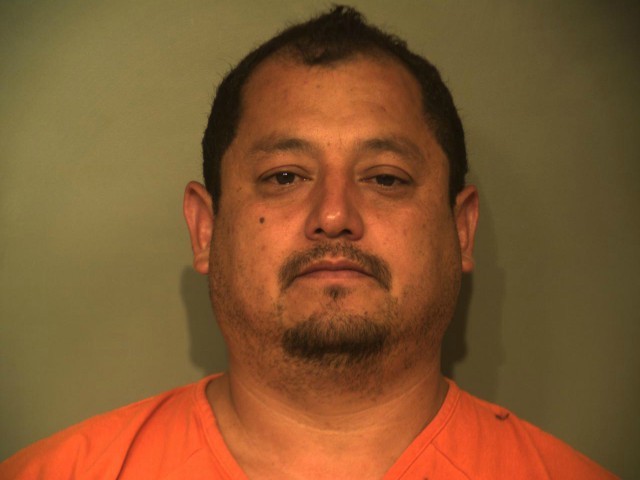 Mendez, a native of Mission, Texas, and an alleged member of the Gulf Cartel appeared on the FBI’s radar in 2015 as part of a racketeering investigation into the Tri-City Bomber gang (TCB), Combs said during the interview. At the time, Mendez owned a trucking business and investigators believe he used it to move large quantities of marijuana, cocaine, and heroin to Indiana and other areas.
“He may be involved in the trucking business in Mexico or he may also own a nightclub,” Combs said.
The criminal indictment alleges that Mendez personally ordered the murder of a man in the Rio Grande Valley on September 24, 2013. The indictment also alleges that Mendez ordered the kidnapping and subsequent murder of another man on April 25, 2014, also in South Texas. 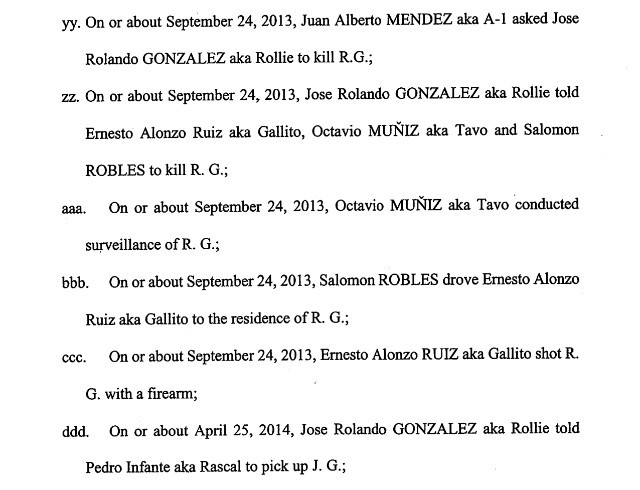 The indictment linked various members of the TCB to numerous home invasions where gunmen searched for drugs and cash, at times assaulting or killing those inside. While not mentioned in the indictment, there have been various cases where gunmen raided the wrong house and injured innocent victims.
Ildefonso Ortiz is an award-winning journalist with Breitbart Texas. He co-founded the Cartel Chronicles project with Brandon Darby and Stephen K. Bannon.  You can follow him on Twitter and on Facebook. He can be contacted at Iortiz@breitbart.com.

Migrant enclaves already are at the top of the U.S. lists for bad places to live - 10 of the 50 worst places in America to live according to this list are in California, and all of them are famous for their illegal populations. MONICA SHOWALTER

California—not Mississippi, New Mexico, or West Virginia—has the highest poverty rate in the United States. According to the Census Bureau’s Supplemental Poverty Measure—which accounts for the cost of housing, food, utilities, and clothing, and which includes noncash government assistance as a form of income—nearly one out of four Californians is poor. Kerry Jackson
*
California’s de facto status as a one-party state lies at the heart of its poverty problem. With a permanent majority in the state senate and the assembly, a prolonged dominance in the executive branch, and a weak opposition, California Democrats have long been free to indulge blue-state ideology while paying little or no political price. The state’s poverty problem is unlikely to improve while policymakers remain unwilling to unleash the engines of economic prosperity that drove California to its golden years. Kerry Jackson
*
As Breitbart News reported, if chain migration is not ended — as President Donald Trump has demanded — the U.S. electorate will forever be changed, with between seven to eight million new foreign-born individuals being eligible to vote because of chain migration, and overall, an additional 15 million new foreign-born voters.
*
Missouri Senator Claire McCaskillhas identified California Senator Kamala Harris as the party leader on issues of immigration and race. Harris wants a moratorium on construction of new immigration-detention facilities in favor of the old “catch and release” policy for illegal aliens, and has urged a shutdown of the government rather than compromise on mass amnesty.
*
No Justice for Taxpaying Americans
By Howie Carr
But the real double standard kicks in when the undocumented Democrat gets to the courtroom. A taxpaying American can only dream of the kid-gloves treatment these Third World fiends get.
*

The costs of illegal immigration are being carefully hidden by Democrats. MONICA SHOWALTER
*
The Federation for American Immigration Reform estimates that California spends $22 billion on government services for illegal aliens, including welfare, education, Medicaid, and criminal justice system costs.  STEVEN BALDWIN
*
Heather Mac Donald of the Manhattan Institute has testified before a Congressional committee that in 2004, 95% of all outstanding warrants for murder in Los Angeles were for illegal aliens; in 2000, 23% of all Los Angeles County jail inmates were illegal aliens and that in 1995, 60% of Los Angeles’s largest street gang, the 18th Street gang, were illegal aliens.

Beto’s solution to the wall issue: let the rest of Mexico jump our open borders and vote democrat for more and no wall will be needed!

IS BETOMATIC A CLONE OF BANKSTER-OWNED BARACK OBAMA, THE LA RAZA SUPREMACIST WHO SURRENDERED OUR BORDERS FOR 8 YEARS AS HE AND HOLDER SERVICED THEIR CRONY CRIMINAL BANKSTERS.

https://mexicanoccupation.blogspot.com/2019/02/is-beto-betomatic-orourke-nothing-more.html
*
“Our entire crony capitalist system, Democrat and Republican alike, has become a kleptocracy approaching par with third-world hell-holes.  This is the way a great country is raided by its elite.” – Karen McQuillan  AMERICAN THINKER.com

Agents assigned to the Eagle Pass Border Patrol Station encountered a large group of migrant families and unaccompanied minors after they illegally crossed the border from Mexico.

Del Rio Sector agents patrolling near the small border community of Quemado, Texas, on Monday encountered a group of 90 migrants who had just crossed the Rio Grande River from Mexico. Border Patrol officials reported that the migrants were all Honduran nationals. Many of the group were women and children. Officials said the children ranged from one to 17 years of age.
The group surrendered to the agents without incident, officials reported. The agents arranged for a transport bus and took the migrants to the Eagle Pass Station for processing and a biometric background investigation.
“Although groups of this size, until recently, have been uncommon in the Del Rio area, our agents are encountering larger groups of immigrants with women and young children,” Del Rio Sector Acting Chief Patrol Agent Matthew J. Hudak said in a written statement. “Our highest priority will always be the safety of all people involved, no matter the situation. However, it is a criminal offense to enter the United States at a place other than a designated port of entry. Those who choose to enter illegally will be arrested and handled accordingly.”
Officials said that one of the women reported abdominal pain. She told the agents she was pregnant. The agents rushed her to the Duncan Regional Medical Center where she went into labor and gave birth.
Eagle Pass is the scene where 1,700 mostly Honduran caravan migrants gathered across the river in Piedras Negras to await an opportunity to request asylum in the U.S. Earlier this month, Breitbart News reported that a group of the migrants attempted to rush the border and illegally cross into Texas.
Mexican officials began shutting down some of the shelters for the caravan migrants last week. Officials said many of the migrants moved to west Sonora and Chihuahua where they hoped to cross in the El Paso area. About 300 migrants remain in the Piedras Negras area, officials stated.
Bob Price serves as associate editor and senior political news contributor for the Breitbart Border team. He is an original member of the Breitbart Texas team. Follow him on Twitter @BobPriceBBTX and Facebook.
Posted by The Mexican Invasion & Occupation at 10:08 AM