BARBRA STREISAND, THE WOMAN WITH THE FETISH FOR HER OWN HANDS, SAYS SHE CAN'T GET ENOUGH OF GRIFTER HILLARY CLINTON

Is it a signal that she's back in the game because she's selling her president-ability to the world's global billionaire crowd and laying the groundwork for more funds?  There are all kinds of ways for foreign billionaires to get money to the U.S. without consequences, after all.  What's more, it's pretty much the biggest base of support she has, which is at least one reason why she lost the 2016 election.
*
“The couple parlayed lives supposedly spent in “public service”
into admission into the upper stratosphere of American wealth, with incomes in the top 0.1 percent bracket. The source of this vast wealth was a political
machine that might well be dubbed “Clinton, Inc.” This consists essentially of
a seedy money-laundering operation to ensure big business support for the
Clintons’ political ambitions as well as their personal fortunes.
*
The basic components of the operation are lavishly paid speeches to Wall Street and Fortune 500 audiences, corporate campaign contributions, and donations to the ostensibly philanthropic Clinton Foundation.”
*
"But what the Clintons do is criminal because they do it wholly at the expense of the American people. And they feel thoroughly entitled to do it: gain power, use it to enrich themselves and their friends. They are amoral, immoral, and venal. Hillary has no core beliefs beyond power and money. That should be clear to every person on the planet by now."  ----  Patricia McCarthy - AMERICANTHINKER.com
///

THE DEMOCRAT PARTY’S BILLIONAIRES’ GLOBALIST EMPIRE requires someone as ruthlessly dishonest as Hillary Clinton or Barack Obama to be puppet dictators.

2.     Hillary Clinton’s Democratic party: An executive nearly broke down crying because of the candidate’s loss. Not a single executive expressed anything but dismay at her defeat.

3.   Immigration: Maintaining liberal immigration in the U.S is the policy that Google’s executives discussed the most.

Even though it has gone virtually unreported by Corporate media, Breitbart News has extensively documented the Clintons’
longstanding support for “open borders.” Interestingly, as the Los Angeles Times observed in 2007, the Clinton’s praise for
globalization and open borders frequently comes when they are
speaking before a wealthy foreign audiences and donors.

THE SHADY POLITICS OF HILLARY CLINTON and her PAY-TO-PLAY MAFIA
http://hillaryclinton-whitecollarcriminal.blogspot.com/2018/09/had-hillary-clinton-won-election-left.html

The left cared nothing about that bit of collusion.

Hillary and her campaign aides have long been involved with Russia for reasons of personal gain.  Clinton herself got $145 million in donations to the Clinton Foundation for allowing Russia to take over twenty percent of all uranium production in the U.S. Her campaign chairman, John Podesta, is reaping the financial benefits of being on the board of a Russian company, Joule, which he did not disclose.  PATRICIA McCARTHY

Had Hillary been elected, the Clinton Foundation would be raking in even more millions than it did before.  She would be happily selling access, favors and our remaining freedoms out from under us. PATRICIA McCARTHY

Left-wing pop icon Barbra Streisand made her Madison Square Garden concert Saturday about politics, praising Bill Clinton — who was in attendance alongside Hillary — as “a great president,” explaining how badly she wanted to sing at Hillary’s inauguration, and targeting President Donald Trump with a remixed rendition of “Send in the Clowns.”

“He left this country with a budget surplus!” Barbra Streisand said of former President Clinton, adding, “By the way he did that by taxing the highest wage earners.”
“A great president needs a sense of history and unquenchable thirst for knowledge,” she continued. “And the compassion that would not allow children to be separated from their parents.”
New York Magazine Washington Correspondent Olivia Nuzzi gave a play-by-play of Streisand’s seemingly impromptu political moment during the concert. According to her tweets, the singer polled the crowd to find out if there were more Democrats or Republicans and proceeded to sing “a parody of Send in the Clowns about Trump.” The Trump supporters in attendance, Nuzzi said, were irritated and shouted “Just sing!”

Replying to @Olivianuzzi
Barbra Streisand polled the crowd to see if there are more Democrats or Republicans, and then told the latter to cover their ears. Now she’s singing a parody of Send in the Clowns about Trump. “Jerry, you know what I’m talking about,” she said to Nadler, before she started.

Olivia Nuzzi@Olivianuzzi
Trump supporters are screaming “JUST SING” and “WE DON’T WANNA HEAR IT” at Barbra Streisand. Meanwhile a man behind me just said “they don’t like the truth. They can’t handle the truth.”

78 people are talking about this


It has been over a decade since the “Evergreen” singer performed on an arena stage and her’s in NYC was met with a flurry of high-profile attendees including Rep. Jerry Nadler (D-NY), Al Sharpton, and Bill and Hillary Clinton — all of whom she gave special shout-outs to.

.@BarbraStreisand gets political. After shout outs to @TheRevAl and @RepJerryNadler then @BillClinton who gets thunderous applause. 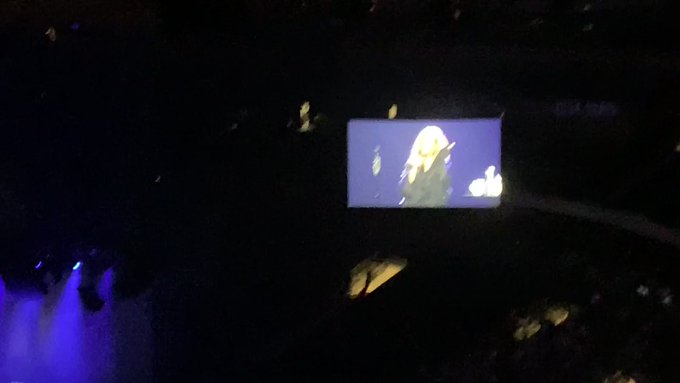 27 people are talking about this

.@BarbraStreisand gets political. After shout outs to @TheRevAl and @RepJerryNadler then @BillClinton who gets thunderous applause.

Samantha Liebman@SamiLiebman
But when @BarbraStreisand talks up @HillaryClinton, who gets even more applause than Bill, she says 3 years ago she hoped to sing at her inauguration. 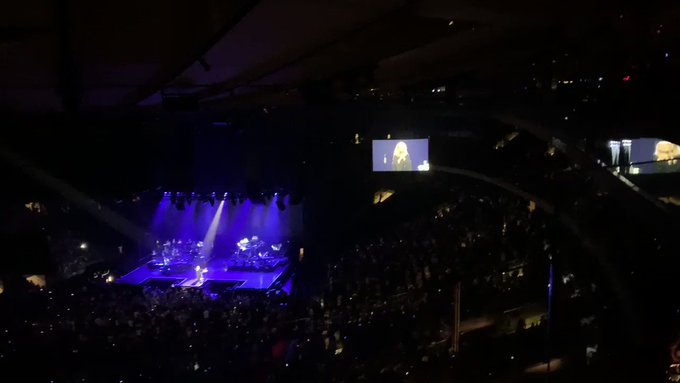 70 people are talking about this

Waiting for Barbra Streisand at The Garden and the crowd just erupted on the floor for Bill and Hillary Clinton, who just arrived.

Olivia Nuzzi@Olivianuzzi
I’m sorry I just need everyone to know that Barbra Streisand is showing the crowd a slideshow of photos from her life and that is what Hillary Clinton and Bill Clinton are doing right now.

18 people are talking about this 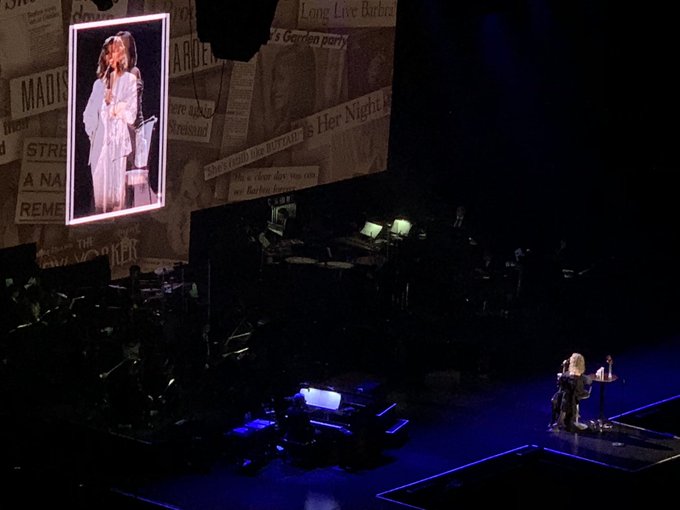 Replying to @Olivianuzzi
I’m sorry I just need everyone to know that Barbra Streisand is showing the crowd a slideshow of photos from her life and that is what Hillary Clinton and Bill Clinton are doing right now.

Olivia Nuzzi@Olivianuzzi
Barbra Streisand is now thanking Bill Clinton for being “a great president” and introducing him and Hillary to the crowd like they’re in the band.

18 people are talking about this

Replying to @Olivianuzzi
Barbra Streisand told Hillary Clinton that she had been hoping to sing at her inauguration. And then a lady walked out past me while loudly complaining that Streisand was “being political.”

Olivia Nuzzi@Olivianuzzi
I didn’t anticipate on doing any political reporting when @RyanLizza told me he was taking me to see Barbra Streisand but here we are.

Replying to @Olivianuzzi
Oh one more thing: I think she said Jerry Nadler is also here.

Olivia Nuzzi@Olivianuzzi
Barbra Streisand polled the crowd to see if there are more Democrats or Republicans, and then told the latter to cover their ears. Now she’s singing a parody of Send in the Clowns about Trump. “Jerry, you know what I’m talking about,” she said to Nadler, before she started.

28 people are talking about this


According to Variety, Streisand sang a politically charged rendition of “Send in the Clowns,” with its lyrics aimed at President Trump. Variety wrote:

About 45 minutes into her show, Streisand paused to salute the high-profile Democrats in the house, including former New York Mayor David Dinkins, Al Sharpton, Congressman Jerry Nadler and Bill and Hillary Clinton, her longtime friends. Streisand praised the 42nd President for balancing the budget and rescuing the economy during his eight years in office. “But being a great President is about more than just dollars and cents,” Streisand noted. “A great President needs a sense of history, and an unquenchable thirst for knowledge, and the compassion to not let children be separated from their parents.” It was her first dig at Trump, but it wouldn’t be the last.
Streisand then addressed Hillary: “Madam Secretary, you gave our allies confidence and our foes unambiguous clarity. You demonstrated that strength and kindness can exist in equal measure. And needless to say, three years ago, I was truly hoping to sing at your inauguration.”
Following an intermission, Streisand returned to the stage in a white Donna Karan dress, which she said had been made for her a few days earlier by the designer. She seemed more relaxed, hitting every note of the timeless bummer “Send in the Clowns.” Fittingly, she followed it up with a new version of the song, advising the (few) Republicans in attendance to cover their ears. While a picture of Trump as a clown was projected behind the stage, Streisand crooned:
He says he’s rich
Maybe he’s poor
‘Til he reveals his returns
Who can be sure
Who is this clown?
Something’s amiss
I don’t approve
Now that he’s running the free world
Where can we move?
Maybe a town!
Just who is this clown?
This is not a farce
It’s not just smoke
Is this his “Art of the Deal” or some awful joke?
You’ve got to admit
This fraudulent twit
Is so full of …

The Grammy winner has been a long-time advocate for Democrats and left-wing causes. Last month, she called for “climate change deniers” to be removed from office, “starting with Trump.”

Last week it was 114 in Paris and Guadalajara was buried in 3 feet of ice from a hailstorm. Climate change is here now and it is time for voters to remove the climate deniers from office. Starting with Trump. https://www.washingtonpost.com/world/2019/07/01/freak-summer-hailstorm-buries-mexican-city-under-five-feet-ice/ …

"Then we ask ourselves if climate change is real," Jalisco Gov. Enrique Alfaro said.
washingtonpost.com

1,352 people are talking about this

Posted by The Mexican Invasion & Occupation at 4:15 PM