BLOG EDITOR'S DEFINITION OF A LAWYER:

ONE WHO HAS BEEN INSTITUTIONALLY TRAINED IN LAW SCHOOL TO LIE, CHEAT, STEAL, ORCHESTRATE PERJURY, COMMIT PERJURY AND GAME THE LEGAL SYSTEM FOR BUCKS.
ONLY CRIMINALS HAVE MORE CONTEMPT FOR THE LAWS THAN THE TYPICAL PARASITIC LAWYER!

Actress and #MeToo activist Rose McGowan has called for Harvey Weinstein’s former attorney Lisa Bloom to be disbarred, following revelations that Bloom — a self-described defender of women and the daughter of lawyer Gloria Allred — sought to discredit McGowan and other actresses who have accused the movie mogul of sexual harassment and assault.

She Said, a new book from the New York Times reporters who broke the Weinstein scandal, reportedly reveals that Bloom tried to discredit McGowan by offering to place articles in media outlets that would portray the Grindhouse actress as unstable.
“I feel equipped to help you handle the Roses of the world because I have represented so many of them,” Bloom wrote in a memo to Weinstein that is excerpted in the book.
“We can place an article re her becoming increasingly unglued, so that when someone Googles her this is what pops up and she’s discredited.”
McGown responded Sunday with a call for Bloom to be disbarred.
“The evil that was perpetrated on me and others was mind bending and illegal. Lisa Bloom should be disbarred,” McGowan wrote on Twitter.

The evil that was perpetrated on me and others was mind bending and illegal. Lisa Bloom should be disbarred @yashar https://twitter.com/yashar/status/1170695516524560385 …

✔@yashar
1. It's no secret that Lisa Bloom repped Harvey Weinstein & worked w/ him to discredit accusers

But in @jodikantor @mega2e's new book 'She Said' we learn just how far Bloom was willing to go to destroy women who were the targets of Weinstein's predationhttps://nyti.ms/2k5dpuH 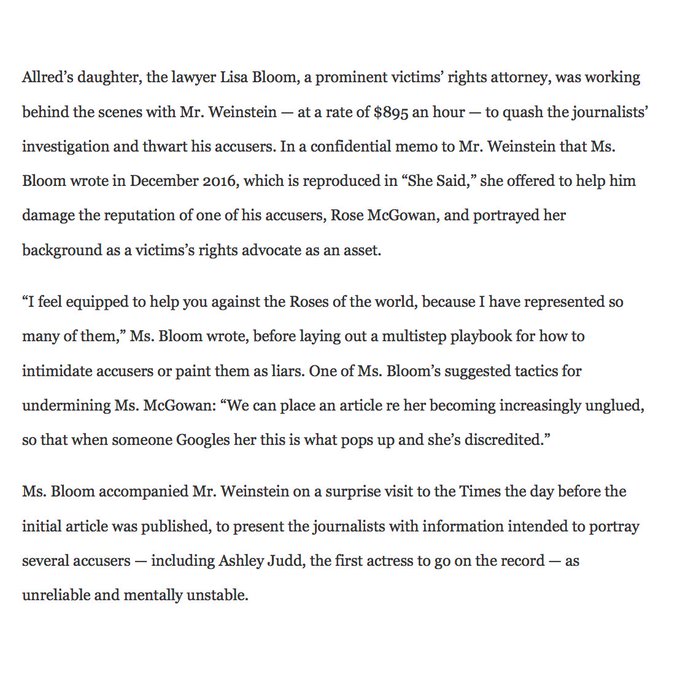 2,141 people are talking about this


According to the new book, Bloom and Weinstein visited the New York Times the day before the initial article was published in 2017. In that meeting, they sought to discredit actress Ashley Judd and several other accusers as mentally unstable.
Judd has accused Weinstein of sexual harassment and is currently suing him for defamation, alleging that he tried to ruin her career when she rejected his advances.
In another memo excerpted in the book, Bloom told Weinstein: “You should be the hero of the story, not the villain. This is very doable.”
Bloom issued an apology on Sunday but didn’t mention McGowan by name.
“While painful, I learn so much more from my mistakes than my successes. To those who missed my 2017 apology, and especially to the women: I am sorry. Here are the changes I’ve made to ensure that I will not make that mistake again,” she wrote on Twitter.

While painful, I learn so much more from my mistakes than my successes.

To those who missed my 2017 apology, and especially to the women: I am sorry.

Here are the changes I've made to ensure that I will not make that mistake again.

1,183 people are talking about this


Bloom resigned from Weinstein’s team in October 2017.
Like her more famous mother, Bloom has promoted herself as a defender of women, representing victims of harassment and assault.
But her public image as a feminist crusader has collapsed as she has become engulfed in high-profile scandals.
The Daily Beast reported in 2017 that Bloom was prepared to leak files about McGowan’s sexual history to journalist Ronan Farrow.
The Hill reported that Bloom, who represented two of the women who made sexual harassment allegations against President Donald Trump during the 2016 campaign, sought payoffs as high as six figures for her clients.
Follow David Ng on Twitter @HeyItsDavidNg. Have a tip? Contact me at dng@breitbart.com

Posted by The Mexican Invasion & Occupation at 9:49 AM