BABY YODA NEEDS TO BE ADOPTED! Here's the info

By CNN.COM WIRE SERVICE
December 27, 2019 at 2:25 pm
By Alaa Elassar | CNN
If you thought Baby Yoda was cute, wait until you meet Joy, the rescue cat with an uncanny resemblance to the green “Star Wars” alien.
With enormous ears, big, round eyes, and little button nose, Joy is the Baby Yoda we all dream of cuddling every night.


The rescue cat was found by a humane society volunteer on Dec. 15 suffering with a large wound on the neck, which vets believe was caused by an animal attack, abuse by an owner, or an accident.
Joy is thought to be 1 to 2 years old. Vets at the Cabarrus Animal Hospital treated a number of illnesses, including a respiratory infection and intestinal parasites.
The adoption will be handled by the Humane Society of Rowan County in North Carolina while Joy is being fostered by an animal hospital employee.
“She is doing OK,” Nancy Rominger, a board member at the humane society, told CNN. “She’s still having a few symptoms, but she’s being taken care of by the vets. It’s going to take a while for her to heal.”
Joy tested negative for any other diseases or illnesses and is otherwise a completely healthy feline.
Despite the rough start, the unique fur baby is known for a love of attention.
“She’s very cuddly, she’s very affectionate, and she’s very sweet,” Rominger said. “Her experiences have not made her into an attack cat. She seems to like people and loves being in laps. She’s going to make someone a very nice pet.”
Before Joy can be taken to a “forever home,” the cat faces a long recovery process. Joy will also have to be spayed and get the required vaccinations.
Until then, you can apply for a shot at adopting this Baby Yoda cat as your own.
Posted by The Mexican Invasion & Occupation at 4:31 PM No comments: Links to this post

Actress-comedian Sarah Silverman has experienced an apparent meltdown over President Donald Trump’s border enforcement policy, expressing her desire for physical violence in a profane and inchoate social media rant.
Sarah Silverman claimed in a tweet posted on Christmas Eve that President Trump is being deliberately cruel when federal agents separate adults and children who have crossed the U.S. border illegally. The comedian was responding to an undated photo showing children in what appears to be a border detention center.
“I can’t fucking bear this,” Silverman wrote. “How do you look at this and support Trump?? He did THIS to be purposely cruel. This is not how we are supposed to welcome the stranger. My fucking heart. I want to punch.”

I can’t fucking bear this. How do you look at this and support Trump?? He did THIS to be purposely cruel. This is not how we are supposed to welcome the stranger. My fucking heart. I want to punch https://twitter.com/CharlesFinch/status/1209549516036329475 …

Charles Finch@CharlesFinch
Hundreds of kids in Texas are spending Christmas Eve taking care of each other. Freezing cold, insufficient food, water, medical attention, hygienic resources. No contact with their parents. Many as young as 1. 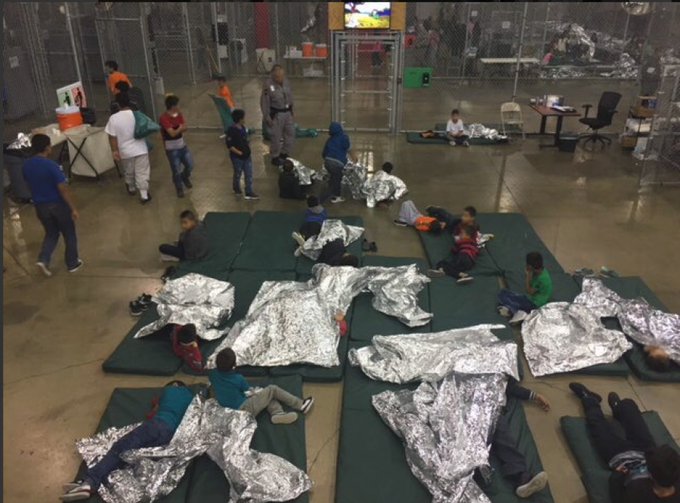 47.6K people are talking about this


Silverman didn’t say whom she wanted to punch. It’s also unclear when the photo in her tweet was taken.
Anti-Trump author Stephen King also tweeted the undated photo and sent a warning to Christian Trump supporters.
“Christian Trump supporters, take note,” the Misery author wrote.
Silverman has previously engaged in obscene Twitter rants against President Trump. She called the commander in chief a “smelly penis hole” and a “greedy twat,”  telling him to “eat shit.”

No point in explaining how mind blowingly stupid this tweet is so I’m just gonna go with FUCK YOU, and also add that you are a smelly penis hole with balls that touch water. Eat shit, you greedy twat. https://twitter.com/realDonaldTrump/status/1094718856197799936 …

Donald J. Trump
✔@realDonaldTrump
Well, it happened again. Amy Klobuchar announced that she is running for President, talking proudly of fighting global warming while standing in a virtual blizzard of snow, ice and freezing temperatures. Bad timing. By the end of her speech she looked like a Snowman(woman)!

19.1K people are talking about this


The former Hulu talk show host also claimed that the “only way Trump stays out of jail is by staying president, and he probably will.”

I don’t enjoy being negative but I’m pretty sure the only way Trump stays out of jail is by staying president, and he probably will.

2,571 people are talking about this


Silverman revealed earlier this year that she lost a job on a movie after the producers learned that she had publicly appeared in blackface.
Follow David Ng on Twitter @HeyItsDavidNg. Have a tip? Contact me at dng@breitbart.com

Posted by The Mexican Invasion & Occupation at 4:25 PM No comments: Links to this post