THE PLANNED PARENTHOOD BABY BUTCHERIES - DEMOCRAT GOV PHIL MURPHY HANDS THE BUTCHERS $9.5 MILLION - You vote to fund and murder unborn children? - " Dr. Leah Torres, an OB/GYN in Salt Lake City, Utah, said that when she performs certain abortions she cuts the vocal cord of the baby so "there's really no opportunity" for the child to scream."

New Jersey Democrat Gov. Phil Murphy signed into law Thursday a measure that provides $9.5 million in taxpayer funds, most of it to Planned Parenthood, after the abortion chain opted out of the federal Title X family planning grant program.

The Title X gag rule is nothing less than an attack on the health care of thousands of women and families. In New Jersey, we will #ProtectX.https://nj.gov/governor/news/news/562019/approved/20200102a.shtml … 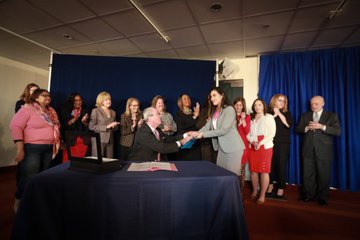 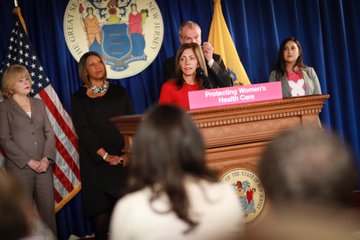 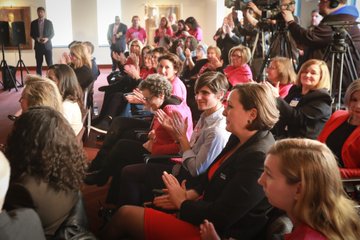 82 people are talking about this


Murphy, a former Obama-era ambassador to Germany, signed the bill in the presence of state lawmakers, his wife, and Planned Parenthood officials, reported CBS.
Using the narrative of the abortion industry and its allies that abortion is “health care,” the governor blamed the Trump administration for enforcing the rule that taxpayer funds cannot be used for grants to providers who perform or refer for abortions.
“The federal government has once again put narrow political interests before the best interests of the American people by implementing the Title X gag rule, which blocks women from access to vital information and resources that are critical to their health,” Murphy said, adding:

Marie Tasy, executive director of New Jersey Right to Life, said the bill was a “disgraceful” money grab that ultimately helps an organization that supports Democrats during elections:


“The taxpayers of New Jersey should not be forced to fund abortion – and make no mistake – that is what this bill will do,” Tasy said.
In August, Planned Parenthood made the decision to opt out of the federal family planning grant program, portraying itself as a victim of the Trump administration.
The Trump administration’s Protect Life Rule required Planned Parenthood and other providers to end referring women and girls for abortions if the organizations still wanted to receive some $60 million in federal Title X family planning funds. The Trump administration has made it clear that abortion is neither health care nor family planning.
Subsequently, Planned Parenthood asked a federal appeals court to block the rule so that it could continue to receive federal funds as it still refers women for abortion – its primary moneymaking enterprise.
The group said it “will be forced out” of Title X unless the court blocks the Protect Life Rule – which it refers to as a “gag rule”:

We just told the Ninth Circuit: unless the court steps in, @PPFA health centers will be forced out of the Title X program due to the Trump admin’s gag rule — putting access to birth control and other essential care at risk for millions who get care through Title X. #ProtectX 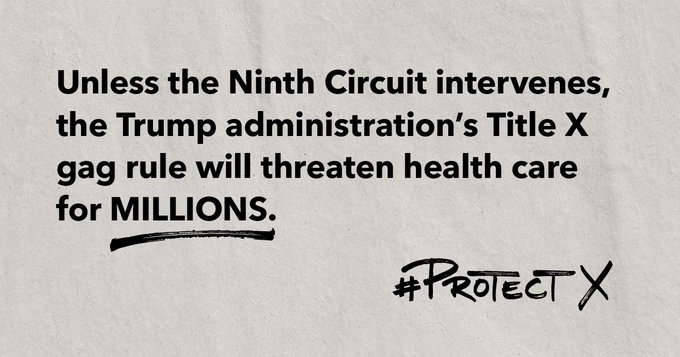 
The U.S. Court of Appeals for the Ninth Circuit, nevertheless, rejected Planned Parenthood’s request.
“Trump’s administration is trying to force us to keep information from our patients,” said Alexis McGill Johnson, acting Planned Parenthood president. “The gag rule is unethical, dangerous, and we will not subject our patients to it. We are considering all of our options.”
Prior to the court’s decision to allow the rule to continue, however, Planned Parenthood indicated nationally that it would rather withdraw from the Title X program and use other funding available so that it might continue to refer for abortions.
The new rule prohibits the use of the funds to “perform, promote, refer for, or support abortion as a method of family planning.”
Planned Parenthood’s annual reports show it performs about 330,000 abortions each year, as many of its other services have been in decline.
In a report released in 2017, the Charlotte Lozier Institute (CLI), the research arm of the pro-life Susan B. Anthony List, confirmed Planned Parenthood obtains 35 percent of the U.S. abortion market – a figure that well overtakes the market shares of leaders in other industries.
“The level of market dominance for abortions demonstrated by Planned Parenthood could be taught in business schools as the ultimate example of strategic planning and execution,” wrote CLI President Chuck Donovan and Vice President Dr. James Studnicki. “It is a defining activity.”
The report also observed that Planned Parenthood provided less than 1.4 percent of the nation’s HIV tests and less than 1 percent of pap tests. Additionally, in the previous five years, service-to-client ratios for breast exams and pap tests had declined by 37 percent.
Mia Heck, spokeswoman for the Department of Health and Human Services (HHS) responded to Planned Parenthood’s objections to the Protect Life Rule with the statement:

To the extent that Planned Parenthood claims that it must make burdensome changes to comply with the Final Rule, it is actually choosing to place a higher priority on the ability to refer for abortion instead of continuing to receive federal funds to provide a broad range of acceptable and effective family planning methods and services to clients in need of these services.

In addition, Catherine Glenn Foster, president of Americans United for Life, said in a statement it was “no surprise” that Planned Parenthood would withdraw from Title X.
Planned Parenthood knows its decision to withdraw “will feed its reality distortion field that, despite being one of the most generously tax-funded nonprofits in America, it is somehow being attacked simply because the Department of Health and Human Services wishes to respect congressional intent,” Foster said.
“And Congress was clear: Title X was never meant to fund abortions,” she continued. “The law is clear.”
Planned Parenthood still receives over $500 million in taxpayer funds each year.


Posted by The Mexican Invasion & Occupation at 8:50 AM