Audacious Epigone
A+
|
a-
The following map and table were constructed using data collected during the 2011-2012 school year, covering American PreK-12 students during that time. They show the ratio of black students to white students given out-of-school suspension at least once during the course of the year, by state (except for Hawaii): 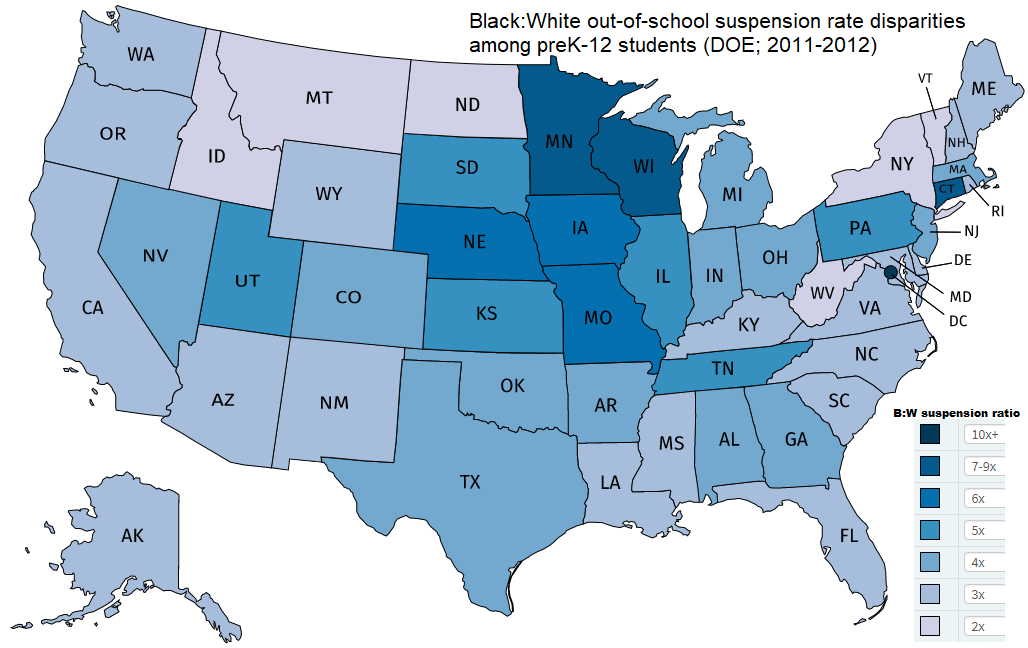 Though the results come from a pool covering 49 million students, the DOE report rounds rates to the nearest full percentage. I’ve consequently done the same with displayed ratios. The states are however still ranked in the table by non-rounded ratios.
It’s worth noting that these school suspension disparities are considerably narrower than are the disparities in violent crime among black and white adults.
A few other interesting gleaned insights:

Three suspects age 19 and younger have now been charged in the death of Charles County high schooler Bradley Brown, county officials announced.
Keshawn Belasco, 16, and Mikayle Qawwee, 19, of Waldorf, were charged with first-degree murder, gun charges and armed robbery, the county sheriff’s office said in an update Friday afternoon. Though Belasco is a juvenile, he was charged as an adult.
Belasco, Qawwee and 17-year-old suspect Darryl Freeman, who was arrested earlier this week, intended to rob Brown, charging documents say.
Officials said they texted each other two days prior, with one asking, “Where are the sweet licks?” in an apparent reference to committing a robbery.
Freeman appeared in court Friday morning wearing a striped jumpsuit. A judge denied bail.
Brown was killed Tuesday in the driveway of his home. The North Point High School senior was the son of a Prince George’s County detective and the brother of two county officers.
According to police, Brown had been selling THC vape cartridges and Freeman allegedly sold marijuana. Police said in court documents in Freeman’s case that Brown and Freeman communicated on Snapchat about the possible sale of THC vape cartridges. Both of the honors students and school athletes had a gun when they met at Brown’s home, the documents say. The gun found next to Brown was his father’s service weapon and hadn’t been fired.

Bradley Brown was a white teenager. The three individuals charged in murdering him were black males. These black males had planned to rob Bradley before the transaction. All of this happened in the most affluent black county in all of the United States.
His name is Bradley Brown. Tell your children and grandchildren his story (and his fate), as a reason you must stay away from drugs.
[Comment at Unz.com]

Paul Kersey
A+
|
a-
PK NOTE: Their Lives Matter Too. It’s a book you must pick up. Names you’ve never encountered, stories you’ve never read about, all for one, unmentionable reason: black on white murder. Rest in peace, Madison. Your life mattered too.
It’s highly probable were her family to read this, they’d be more outraged at us noticing patterns and documenting who/whom murdered Madison Harris than with her death itself.
She was a white teenager, living in the post-racial society of Biloxi, Mississippi, where integration had occurred and members of the white working-class were beginning to emulate in dress and speech (increasingly in appearance) the culture of blacks.
Five blacks have now been arrested and charged in her murder during a robbery attempt. They were all teenagers.

The teenagers are identified as follows: Yakeshia L. Blackmon, 17; Willow O. Blackmon, 15; Jasmine Joy-Sade Kelley, 15; Jarvis Jermaine Cook, 17; and Jaquez Devonte Porter, 17.
Police say the five Biloxi teens attempted to use a gun to rob Harris at a home in the 2000 block of Rustwood Drive, which is located just off Popps Ferry Road. An altercation took place and Harris was shot, said authorities.
The five juveniles fled in multiple directions, leading police to canvas the neighborhood looking for them. Witness statements and evidence found at the scene of the murder led investigators to locate all five suspects shortly after the shooting and piece together what happened to Harris.

A $1 million bond was set for all of the suspects except Jarvis Cook, who was already out on bond for an aggravated assault he is accused of committing last year in Gulfport. Cook is being held without bond.

We aren’t supposed to Notice Madison Harris was a white female, and her five killers are black. In fact, in the current year, to notice such racial realities behind this murder is a far graver sin than the murder of Ms. Harris itself.
Nonetheless, Her Name is Madison Harris. Were the races reversed, your death would be a national story, with the media trying to find ways to connect this modern-day lynching to Emmett Till. As is it, few outside of Biloxi and those reading this piece will ever stumble across how you died and who/whom took your life.
There is no double standard in America, only The Standard, dictating white people have no collective interests or concerns, and that violent interracial crime can only be reported if a white person (thereby all white people in the USA are guilty) is the suspect.
And remember: Their Lives Matter Too.

THE DEPRAVED GHETTO BLACK CULTURE IN AMERICA  - Is it the world’s most violent subculture?
https://mexicanoccupation.blogspot.com/2019/10/ghetto-black-violence-in-america-dr.html
"Dr. Williams comments on another reality: that the rate of black homicide and armed robbery as well as other violent crimes are as is as much as 15–30 times more than whites."
So, we have local black gang associates posting terror threats on social media -- threats of murder, by burning, directed at the women and children family members of white police employees -- immediately before the murder, by burning, of the white teenage daughter of a local police department employee. Plus, the killing took place only minutes after the victim was seen on video at the same location as the husband or boyfriend of the person who posted the threats, as he was filling a handheld can with gasoline.
Posted by The Mexican Invasion & Occupation at 2:17 PM