Bullying and Fraud: China Plows Ahead with Threats and Bogus Humanitarian 'Help' - Senator Dianne Feinstein and Mark Zuckerberg there to aid the Chinese dictators


Bullying and Fraud: China Plows Ahead with Threats and Bogus Humanitarian 'Help'

Source: AP Photo/Mark Schiefelbein, File
Last week, we wrote about the global backlash to China's pattern of bullying and bogus humanitarianism in the midst of a global pandemic exacerbated by China's secrecy and lies. Undeterred, the communists of Beijing continue to press ahead with this alienation strategy, evidently determined that economic dependence will compel the world to ignore or at least soften its collective reaction to the regime's treachery. This cynical calculation may prove correct in some cases, but they're not making many friends these days. Let's start with Australia, whose government's insistence on an independent review of how the virus originated has drawn negative reactions from Beijing. It started with dismissive taunts and has now graduated to menacing:

Australia has been warned by the Chinese ambassador that it could face an economic hit if it does not back down from a push into the nation’s handling of the coronavirus. Ambassador Cheng Jingye on Monday said the push was “dangerous” and could encourage Chinese citizens to not purchase Australian exports or travel to the nation. The government however is not backing down from the call for an independent inquiry, with Foreign Minister Marise Payne criticising the threat of an economic hit due to the push...“We reject any suggestion that economic coercion is an appropriate response to a call for such an assessment, when what we need is global co-operation."

Good for Canberra for not backing down. These threats are outrageous, and the United States should firmly stand beside our cousins down under. Prime Minister Scott Morrison is enjoying strong popularity at home for his handling of coronavirus, so he has the political capital to stay firm. Unfortunately, in Europe, China's pressure campaign is paying early dividends. The regime was able to push the European Union to tone down its report on China's pandemic-related disinformation campaign, resulting in frail avoidance:

Bowing to heavy pressure from Beijing, European Union officials softened their criticism of China this week in a report documenting how governments push disinformation about the coronavirus pandemic, according to documents, emails and interviews. Worried about the repercussions, European officials first delayed and then rewrote the document in ways that diluted the focus on China, a vital trading partner — taking a very different approach than the confrontational stance adopted by the Trump administration. The initial European Union report, obtained by The New York Times, was not particularly strident: a routine roundup of publicly available information and news reports. It cited Beijing’s efforts to curtail mentions of the virus’s origins in China, in part by blaming the United States for spreading the disease internationally. It noted that Beijing had criticized France as slow to respond to the pandemic and had pushed false accusations that French politicians used racist slurs against the head of the World Health Organization...
The report also highlighted Russian efforts to promote false health information and sow distrust in Western institutions.  “China has continued to run a global disinformation campaign to deflect blame for the outbreak of the pandemic and improve its international image,” the initial report said. “Both overt and covert tactics have been observed.” But China moved quickly to block the document’s release, and the European Union pulled back. The report had been on the verge of publication, until senior officials ordered revisions to soften the language. “The Chinese are already threatening with reactions if the report comes out,” Lutz Güllner, a European Union diplomat, wrote to colleagues on Tuesday in an email seen by The Times. The sentence about China’s “global disinformation” campaign was removed, as was any mention of the dispute between China and France. Other language was toned down.

If Europe can't bring itself to tell obvious truths about China's actions in the middle of this worldwide lethal outbreak, the prospects for long term courage and clarity are rather dim. As Margaret Thatcher once said, "They're a weak lot, some of them, in Europe. Weak. Feeble." Thatcher's country is preparing to adopt a much stronger line with Beijing, with officials telling the press that London's relationship with China will never be the same after all of this. There were initial reports that the government was moving toward axing its planned 5G partnership with the Chinese telecom giant Huawei, but those rumors were swatted down. But reports persist that key players within Boris Johnson's government still want him to pull the plug on the deal. We shall see what actually happens, but America's position has been quite clear all along, and recent events only vindicate it further. Meanwhile, the Chinese pattern of exporting junk continues apace:
This keeps happening, all across the planet. A White House adviser says he's concerned by what he's seeing on this front here in the US: “One of the things that’s on my radar though that’s really troublesome is there is a lot of these antibody tests coming in from China now that are low quality, false readings and things like that. We've got to be really careful,” Peter Navarro told "Fox and Friends." And China's ludicrous lies just won't stop:

Guy Benson
That risible statistic comes on the heels of similarly clumsy propaganda released last week, while China's persecution and human rights abuses march forward unabated. I'll leave you with polling data that demonstrates that the American people, generally across the spectrum, are seeing this pretty clearly:
Politicians are acting accordingly, on both sides, with the exception of the hopelessly woke Left.
Editor's Note: Want to support Townhall so we can keep telling the truth about China and the virus they unleashed on the world? Join Townhall VIP and use the promo code WUHAN to get 25% off VIP membership!


I LOVE THIS IMAGE OF THE LITTLE SHIT ZUCKERBERG SURROUNDED BY HIS GROVELING ASS-KISSING TOADIES! 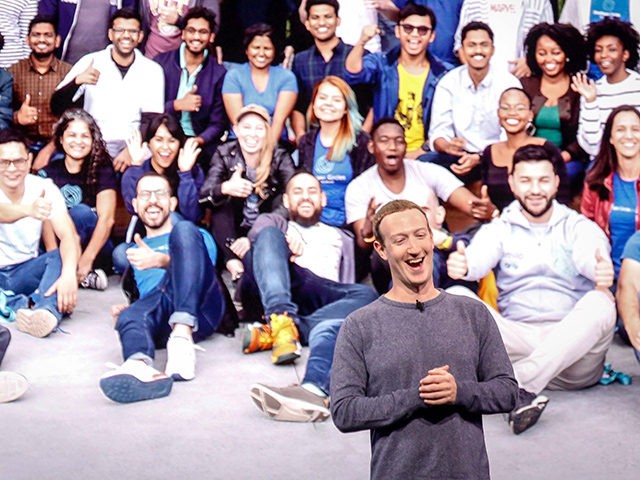 China Committed an Act of War

Mark Zuckerberg’s personal control over the operation of Facebook and its affiliated tech platforms is growing, according to an in-depth report in the Wall Street Journal.
The Journal reports that Zuckerberg is “pushing aside dissenters” as he reasserts control over the company he founded, and is taking new power over Facebook-owned services like Instagram and WhatsApp, despite earlier promises to leave the acquired platforms relatively independent.
Via WSJ:

Facebook announced the departure of two directors, and added a longtime friend of Mr. Zuckerberg’s to the board. The moves were the culmination of the chief executive’s campaign over the past two years to consolidate decision-making at the company he co-founded 16 years ago. The 35-year-old tycoon also jumped into action steering Facebook into a high-profile campaign in the coronavirus response, while putting himself in the spotlight interviewing prominent health officials and politicians.
The result is a Facebook CEO and chairman more actively and visibly in charge than he has been in years.
….
Mr. Zuckerberg in 2018 took on the role of a wartime leader who needed to act quickly and, sometimes, unilaterally. He announced a series of products that took Facebook in new directions, starting with the March 2019 announcement that the company would emphasize private, encrypted messaging instead of the public posts that made it famous.

As Breitbart News covered in a column last week, Zuckerberg’s tightening control over the social media giant coincides with a series of unprecedented acts of censorship, including the censoring of Brazilian president Jair Bolsonaro. The Facebook CEO has also described anti-lockdown protests as “misinformation,” as his company proactively reached out to state governments to collude in the suppression of the protests’ organization on the platform.
As Zuckerberg’s control over Facebook grows, so too does Facebook’s control over the global flow of information — aided by the ongoing panic over coronavirus “misinformation.”
Are you an insider at Google, Facebook, Twitter, or any other tech company who wants to confidentially reveal wrongdoing or political bias at your company? Reach out to Allum Bokhari at his secure email address allumbokhari@protonmail.com.
Allum Bokhari is the senior technology correspondent at Breitbart News.

Posted by The Mexican Invasion & Occupation at 10:35 AM