CALIFORNIA UNDER LA RAZA OCCUPATION - Is the former State of California merely a welfare colony of Mexico and a NO GO ZONE MEXICAN CRIME TIDAL WAVE ZONE for legals?

Most Sanctuary Releases in California

ICE has identified the 20 jurisdictions with the most rejected detainers. Most are in California. 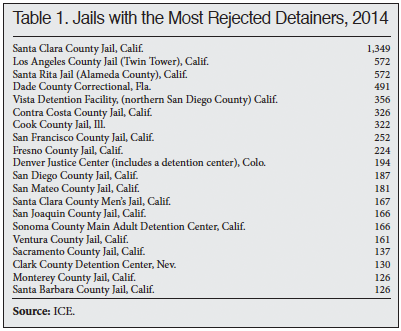 
Across the U.S., there are 340 cities, counties, and states that are considered "sanctuary cities". These jurisdiction protect criminal aliens from deportation by refusing to comply with ICE detainers or otherwise impede open communication and information exchanges between their employees or officers and federal immigration agents.


The number of jurisdictions that are obstructing immigration enforcement has grown to roughly 340, according to the Department of Homeland Security.1 This has resulted in the release by local authorities of approximately 1,000 criminal aliens per month.


One of these is Victor Aureliano Hernandez Ramirez2 who, together with an accomplice, was arrested in July 2015 for raping and then bludgeoning 64-year-old Marilyn Pharis, of Santa Maria, Calif. She died eight days later. Ramirez had been arrested for battery in May 2014 and was in the custody of the Santa Barbara County Sheriff. ICE issued a detainer in order to begin the deportation process after the charges were resolved, but the sheriff did not comply, apparently in accordance with California's state sanctuary law that went into effect on January 1, 2014.


CALIFORNIA ATTORNEY GEN. KAMALA HARRIS…. she declares that nearly half the murders in LA RAZA-OCCUPIED MEXIFORNIA are by mex gangs…. and then busts her arse for the DEMOCRAT PARTY’S open borders amnesty!

“Also remaining nearly silent is San Francisco's Mayor Edwin Lee (D), who has been tweeting about women's soccer (and directing all questions to the sheriff). California Gov. Jerry Brown (D), who signed the state's TRUST Act, allowing for sanctuaries, has clammed up. Other California pols who have promoted the city's sanctuary policies have said next to nothing. This includes, for example, former San Francisco District Attorney and current California Attorney General Kamala Harris (D) (also busy tweeting about soccer), who is vying for retiring Sen. Barbara Boxer's (D) seat; former Assemblyman Tom Ammiano (D); and the entire San Francisco Board of Supervisors who are tweeting about ice cream, jazz festivals and posting selfies taken on BART. I wish I were making this up.”

“Until lawmakers end the catch-and-release policies of the Obama administration,” said Jessica Vaughan of the Center for Immigration Studies, “any infrastructure improvements, new strategies, and better metrics are pointless.”

Posted by The Mexican Invasion & Occupation at 10:59 AM