The Orange County Sheriff’s Department has announced that it will begin publishing a list of criminal aliens who are inmates in the county jail, as part of its existing “Who’s in Jail,” online database.  The information made public will also include when criminal aliens are released from jail, a move that comes in direct retaliation to the state’s “sanctuary” laws which prohibit cooperation between police and federal immigration officials.
“This is in response to SB-54 limiting our ability to communicate with federal authorities and our concern that criminals are being released to the street when there’s another avenue to safeguard the community by handing them over (to ICE for potential deportation),” Orange County Undersheriff Don Barnes said.
California’s “sanctuary law” has recently encountered resistance to this dangerous policy from multiple communities in California. Most notably, the City Council in Los Alamitos voted last week on an ordinance to exempt the city from state law over concerns that it is unconstitutional. 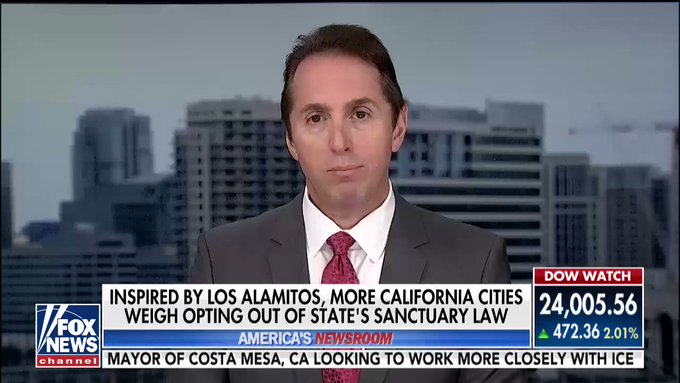 Troy Edgar, Mayor of Los Alamitos: “When [California] passed the sanctuary law, this law basically conflicts directly with my oath of office… to support and defend the Constitution.” https://fxn.ws/2un2e4U

The Yorba Linda City Council agreed to file an amicus brief to a lawsuit filed by the Department of Justice against California.  The Orange County Board of Supervisors are also expected to consider a range of possible actions against the state law as well. 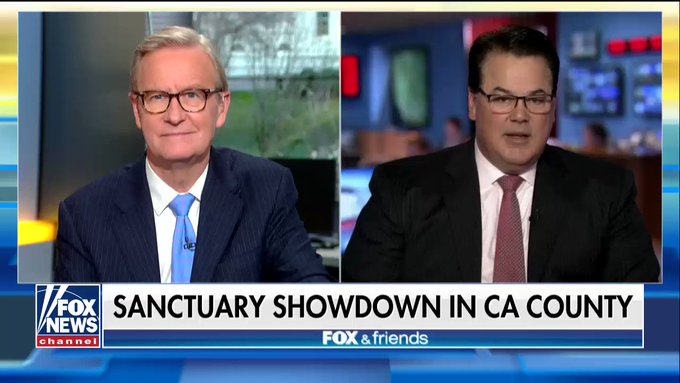 Twitter Ads info and privacy
Open borders groups like the American Civil Liberties Union (ACLU) have been actively working to prevent cities in California from opposing the states “sanctuary” laws.


The revolt against the State of California’s “sanctuary state” laws is growing in Orange County, with supervisors scheduled to discuss a resolution Tuesday condemning the state’s defiance of federal immigration law, and possibly directing the county to join the federal lawsuit against the Golden State.

The discussion, the Los Angeles Times notes, will take place in closed session, but the results will be closely watched, as numerous cities within the county are considering following the lead of Los Alamitos, which voted last week to defy the “sanctuary state” laws and join the federal lawsuit.
The Times reports:

These state laws are preempted by federal law,” Orange County Supervisor Shawn Nelson said. “Our officers actually face penalties under state law if they so much as talk to federal agents for the wrong thing. That’s just unacceptable and it’s contrary to federal law.”
…
Other cities in the county, including Yorba Linda, Buena Park, Huntington Beach and Mission Viejo are also starting to take action to voice their grievances against the state’s sanctuary laws aimed at protecting immigrants from President Trump’s immigration crackdown.

In related news, on Monday, the Orange County Sheriff’s Department decided to defy the state — and obey the federal government — by making public the release dates of inmates in its jails, including illegal aliens.
And more than a dozen Republican-governed states joined the federal government Monday in its lawsuit against California’s sanctuary state laws, which was filed in Sacramento earlier this month as Attorney General Jeff Sessions visited the city.
The U.S. Department of Justice is suing California over three laws: the Immigrant Worker Protection Act (HB 450), the Inspection and Review of Facilities Housing Federal Detainees law (AB 103); and the California Values Act (SB 54).
The battle over sanctuary cities in Orange County could have a big impact on midterm elections in California and nationwide. It could motivate Republican voters to turn out to the polls, counteracting an expected Democratic wave.
Democrats are targeting several Republicans in Orange County, after Hillary Clinton carried the county narrowly in the 2016 presidential election — the first time in decades that a Democrat had won the traditionally conservative county.
The California seats are considered crucial to Democrats’ goals of flipping 23 seats to regain the majority in the U.S. House of Representatives and putting House Minority Leader Nancy Pelosi (D-CA) back in the Speaker’s chair.
The National Republican Congressional Committee recently announced plans to open a new office in Irvine, meaning that both parties will have extensive field operations in Orange County, according to the Orange County Register.
Joel B. Pollak is Senior Editor-at-Large at Breitbart News. He was named to Forward’s 50 “most influential” Jews in 2017. He is the co-author of How Trump Won: The Inside Story of a Revolution, which is available from Regnery. Follow him on Twitter at @joelpollak.

Border Patrol agents in the Tucson Sector arrested a man on human smuggling charges after finding 10 illegal immigrants locked in a trailer being towed by the suspect.

Agents assigned to the State Route 90 Immigration Checkpoint observed a Chevy Suburban towing a small trailer as it approached on March 26. At the initial checkpoint, a K-9 agent alerted on the trailer. The agents referred the driver to the secondary inspection station, according to information received by Breitbart Texas from U.S. Customs and Border Protection officials.
After unlocking the trailer, agents discovered nine men and one woman hiding among the trailer’s cargo. Initially, plywood and large bags of cans hid the human cargo from the eyes of Border Patrol agents. After removing straps from the plywood and removing the panels, agents removed the bags of cans and extricated the illegal immigrants from the trailer. The driver also had large appliances in the back of the trailer, adding to the danger experienced by the migrants.
Agents arrested the driver, a U.S. citizen from Hereford, Arizona, on human smuggling charges. Border Patrol officials seized the Suburban and the trailer.
After re-hydrating the migrants with water, agents transported them to the Wilcox Border Patrol Station for processing on immigration violations.
Transporting illegal immigrants in a poorly ventilated trailer packed with appliances and other cargo places the migrants in grave danger of dehydration, heat exhaustion, and physical injury, officials stated. As summer approaches, the danger becomes more pronounced. Additionally, the locked trailer causes additional danger in the event of a crash.
On March 23, Nogales Station agents arrested two women from Phoenix for smuggling two illegal immigrants in the trunk of their car. The driver, an 18-year-old U.S. citizen, had her infant son traveling with her during the smuggling effort. A 38-year-old Phoenix woman was also traveling in the car.
After the vehicle stopped at the Interstate 19 Immigration Checkpoint, agents referred the driver to a secondary inspection station. Agents opened the trunk and found two men.
The agents questioned the men and determined they are Mexican nationals, 20 and 40-years-old, illegally present in the U.S. The agents transported the men to the Nogales Station for processing on immigration violations.
Agents arrested the two women on charges of human smuggling while the Arizona Department of Child Safety took the infant son into protective custody.
Bob Price serves as associate editor and senior political news contributor for Breitbart Texas. He is a founding member of the Breitbart Texas team. Follow him on Twitter @BobPriceBBTX, Gab, and Facebook.

McCain has spent his entire political career looking for World War III as he has watched Mexico and their heroin cartels walk over and under the borders of his state of ARIZONA.

MEXICO’S INVASION, OCCUPATION, LOOTING and EVER- EXPANDING WELFARE STATE ON OUR BACKS:

Sen. John McCain looks for wars all over the globe and fights for open borders with Mexico despite the invasion his own state of Arizona has suffered!

ONLY OBAMA WORKED AS HARD AS McCAIN TO SABOTAGE OUR BORDERS

Federal agents discovered an underground tunnel crossing the border into Mexico from Naco, Arizona on Tuesday as part of an investigation after a traffic stop that yielded over two tons of marijuana, with a value of approximately $3 million.
Posted by The Mexican Invasion & Occupation at 1:32 PM