With fentanyl, China uses Opium War tactics against us

A new report out from Bloomberg (first spotted on Axios Vitals) signals that China has more ways to defeat us than merely through its military buildup:

Federal prosecutors in Mississippi charged [Chinese national] Yan, 41, in September with leading an empire built on the manufacture and sale of drugs related to fentanyl, one of the world’s deadliest and most profitable narcotics. So strong that it’s been studied as a chemical weapon, the drug has saturated American streets with breathtaking speed: It kills more people than any other opioid, including prescription pills and heroin, because it’s so easy to overdose. Authorities say they have linked Yan and his 9W Technology Co. to more than 100 distributors across the U.S. and at least 20 other countries. Investigators expect scores of arrests as they dismantle his alleged network.
A month after the indictment, Deputy Attorney General Rod Rosenstein held a Washington news conference to shine a spotlight on Yan and another man, Zhang Jian, 39, who’s accused of a similar scheme. Their indictments, Rosenstein told reporters, marked “a major milestone in our battle to stop deadly fentanyl from reaching the United States.”
Yan is the first Chinese national the U.S. has ever added to its “consolidated priority organization target” list of individuals thought to command the world's most prolific drug-trafficking and money-laundering networks. Investigators say his strategy was to offer fentanyl-like compounds called analogues — which differ slightly on a molecular level but produce similar effects — in order to exploit discrepancies between the laws in the U.S. and China.

So along with Mexico, we now have the lovely specter of two of our top trading partners trying to kill us.
But is it really China, or just some miscreant inside China? Bloomberg makes the case that it's China. The problem is its policy that's creating the problem - China says the drug lord never broke any of their laws, and they sure as heck weren't going to extradite him. As Sam Baker at Axios Vitals notes in his short commentary, citing the takeaway from an expert:

What does this mean? It actually leaps out, because history is always instructive in the matter of China. Bloomberg notes:

China has a fraught history with opium, dating to when foreign traders imported it in the mid-1800s. Widespread addiction followed, and attempts to stamp out the trade triggered two futile wars against the British.

The British didn't exactly have an honorable history with China back in the19th century. First they got the Chinese addicted to opium, complete with opium dens, and then when China's leaders tried to stop it, fought two wars against them, defeating them handily so that they could continue to distribute their opium to the public. Ugly stuff.
China has never gotten over that experience, which fairly considered, was bad, and has nursed grievances about Western imperialism ever since. But they also took in the lessons. Drugs can debilitate a population and make it easy to defeat because that's what happened to China. The ugly final result, of course, was Mao's communist takeover and the communist horrors that followed, carrying on since.
Now they're flooding our country with illegal, addictive drugs, well worse than opiates, or their recent derivative, heroin, moving on to fentanyl.
We know the Chinese study history. We know they look to the long term. We know they are using the South China Sea as their launch pad toward global power, following the example of America, which used the Caribbean Sea (and the Panama Canal) as its launching pad to global power - which ended up at the same South China Sea.
Now we can see the outlines of another opium war, this one being foisted back at us, not Britain, and with China using the legal technicalities of our leftwing lawyers as weapons against us to justify flooding our country with opiates.
It's a call for President Trump, Jeff Sessions, Rod Rosenstein and anyone else watching this to be as as hardass and unyielding as possible with the Chicoms as they push against us with poison. They're trying to kill us.

By SNEJANA FARBEROV FOR DAILYMAIL.COM
PUBLISHED: 17:31 EDT, 25 May 2018 | UPDATED: 17:53 EDT, 25 May 2
The Nebraska State Patrol says the 118lbs of suspected cocaine and fentanyl that troopers seized last month turned out to be all fentanyl, which would have been enough to kill more than 26million people.

The patrol says the stash was the largest fentanyl seizure in the history of Nebraska to date, and one of the largest ever in the US.
The drugs may have been worth up to $20million on the street, according to the agency's estimates. The Drug Enforcement Administration says just 2 milligrams of fentanyl, which is 30-50 times more potent than heroin, can be lethal. 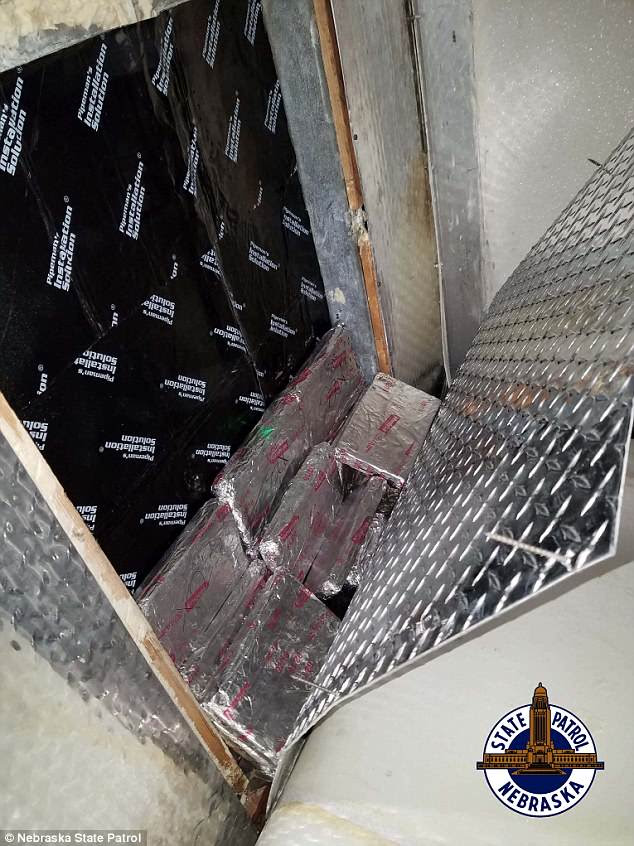 +3
One for the books: The Nebraska State Patrol seized a record-breaking cache of fentanyl weighing 118lbs that was found inside this secret compartment in a tractor-trailer

If the fentanyl were to hit the streets, it would have been enough to kill 26 million people

Share
The foil-wrapped packages were found at around 10.20am on April 26 after a trooper pulled over an eastbound 2013 Freightliner truck-tractor driving on the shoulder near mile marker 280 on Interstate 80 near Kearney, 170 miles southwest of Omaha.
Troopers searched the vehicle and discovered a false compartment in the empty trailer. The compartment contained 42 foil-wrapped packages containing 118lbs of powdery substance that turned out to be fentanyl.
Troopers did not test the suspected fentanyl on the spot due to the 'dangerous nature of the substance,' and instead sent it to the Nebraska State Patrol Crime Lab.
The driver of the truck, Felipe Genao-Minaya, 46, and passenger, Nelson Nunez, 52, both of New Jersey, were arrested for possession of a controlled substance with intent to deliver and no Drug Tax stamp. Both men were taken to Buffalo County Jail. 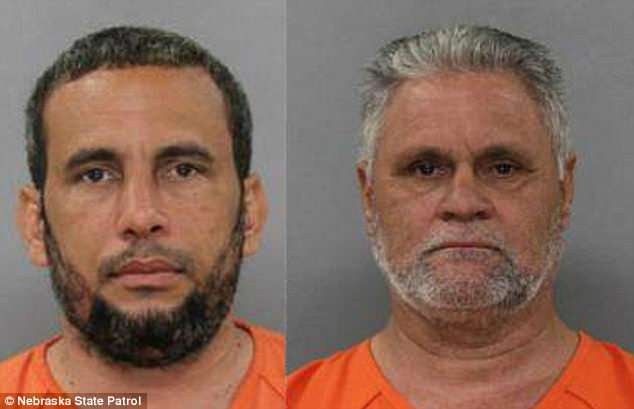 +3
The driver of the truck, Felipe Genao-Minaya, 46, and passenger, Nelson Nunez, 52 (pictured above), were arrested for possession of a controlled substance with intent to deliver 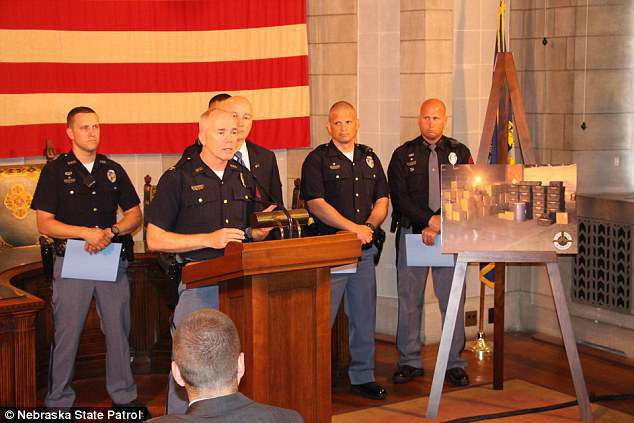 +3
The Nebraska State Patrol was honored by the governor for the recent fentanyl and marijuana  busts
The patrol says such drug seizures save lives. The Centers for Disease Control and Prevention says fentanyl and its variants killed more than 20,000 Americans last year, and the number is increasing.
A week earlier, Nebraska troopers seized 1,853lbs of marijuana in Fillmore County.
Gov. Pete Ricketts honored the agency and specific troopers who took part in the drug busts during a ceremony that was held at the State Capitol on Thursday.
Posted by The Mexican Invasion & Occupation at 7:42 AM