"At the somber event, Trump introduced the

families, who delivered heartbreaking tales of

their loved ones' lives and, at times, gruesome

descriptions of their deaths."

WHAT ABOUT THE CHILDREN OF LEGALS LEFT ORPHANED DUE TO A MEX MURDER???

Instead Francis Hernandez, an illegal alien driving 81 miles an hour, slammed into a pickup truck, killing the two women inside, and smashing it through the glass wall of the Baskin Robbins.

Francis Hernandez had been arrested 16 times in 5 years without ever being turned over to immigration authorities. That failure to enforce immigration law separated a little boy from his family forever.  DANIEL GREENFIELD – FRONTPAGE
Mark Levin:
‘Unbridled Immigration, Legal and Illegal, Is Taking the Country Down’
http://mexicanoccupation.blogspot.com/2015/07/mark-levin-unbridled-immigration-legal.html
This annual income for an impoverished American family is $10,000 less than the more than $34,500 in federal funds which are spent on each unaccompanied minor border crosser.

Steinle’s murderer, Jose Zarate and been deported 5xs!
Everyday there are 12 Americans murdered and 8 children molested by Mexicans!
http://mexicanoccupation.blogspot.com/2017/12/murdering-5xs-deported-illegal-jose.html

Steinle’s murderer, Jose Zarate and been deported 5xs!
"While walking with her father on a pier in San Francisco in 2015, Steinle was shot by the illegal alien. Steinle pleaded with her father to not let her die, but she soon passed in her father’s arms."

'He really will put his name on anything': Fury as President Trump autographs photos of young victims killed by undocumented immigrants as he tries to push back against child border separation uproar

President Donald Trump has prompted fury among some after he signed photographs of young victims killed by undocumented immigrants in attempt to push back against the child border separation uproar.
At a White House event on Friday, Trump brought in 11 people as they each held photographs of their loved ones who have died as a result of crimes committed by unauthorized immigrants.
The photos of the 11 young victims unmistakably had Trump's signature scrawled across them.
Trump referred to them as 'angel families' during the event. 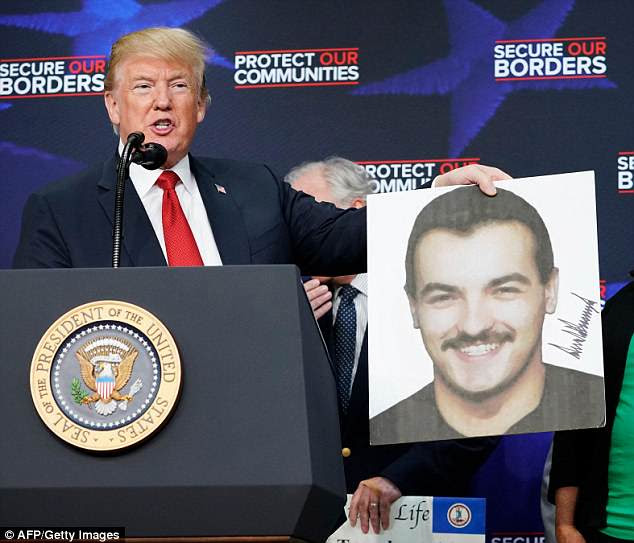 +9
President Donald Trump has prompted fury among some after he signed photographs of young victims killed by undocumented immigrants. He is pictured above holding a portrait of Ronald da Silva
The President was quickly criticized on social media, with many accusing him of being narcissistic and using the slain victims as political pawns.
'Holy s**t Trump appears to have autographed the big big photos of each dead kid,' one person tweeted.
Others wrote: 'He really will put his name on anything', 'There is no bottom with this guy' and 'This man is a sociopathic ghoul'.
'This motherf***er literally autographed pictures of dead children. I didn't think I could hate him anymore, and yet...' another person tweeted.
White House social media director Dan Scavino Jr. said the families requested Trump sign the photos during a private meeting ahead of the public event.
Trump used the event to cast doubt on the heartbreaking tales of migrant children separated from their families at the border as he dismissed the 'phoney stories of sadness and grief'.
Video playing bottom right...
Loaded: 0%
Progress: 0%
0:04
Pause
Unmute
Current Time0:04
/
Duration Time2:50
Fullscreen
ExpandClose +9
Trump shook hands with the 11 people holding portraits of their loved ones. Trump's signature could be seen clearly on each of the photographs 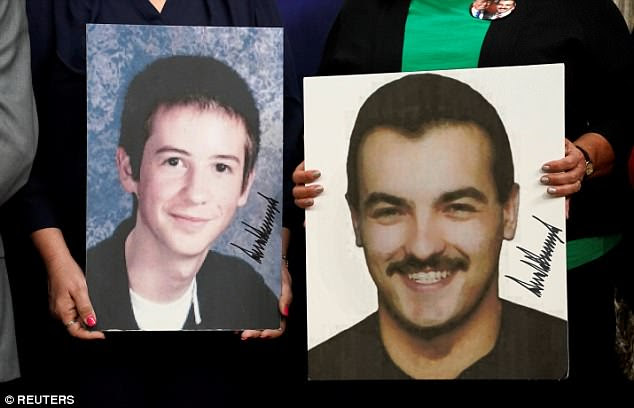 +9
The photos of the 11 young victims unmistakably had Trump's signature scrawled across them
He said that the real victims of the nation's immigration crisis are Americans who have been killed by those who cross the border unlawfully.
Bombarded with criticism condemning the family-separation situation as a national moment of shame, Trump came back firing as he highlighted the genuine grief of families on the other side of the equation.
'We're gathered today to hear from the American victims of illegal immigration. You know, you hear the other side. You never hear this side,' said Trump as he took beside the family members.
He focused on the fact that young migrants separated from parents are likely to be reunited, unlike the victims of murders.
'These are the American citizens permanently separated from their loved ones. The word 'permanently' being the word that you have to think about. Permanently - they're not separated for a day or two days, these are permanently separated because they were killed by criminal illegal aliens,' he said. 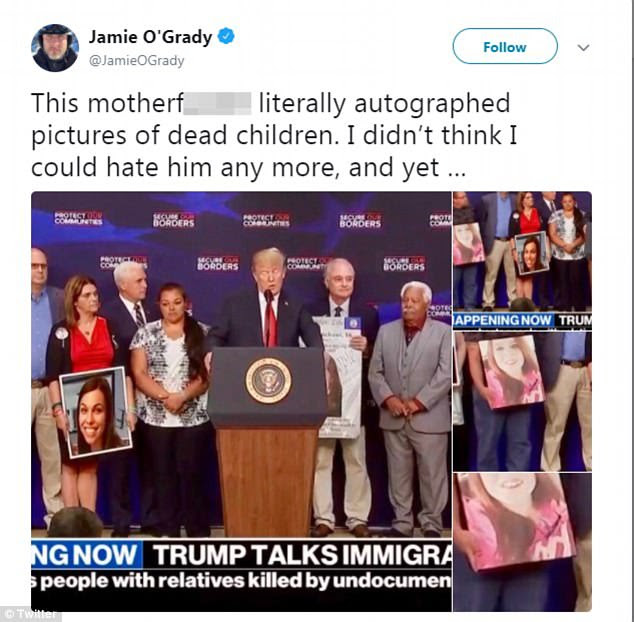 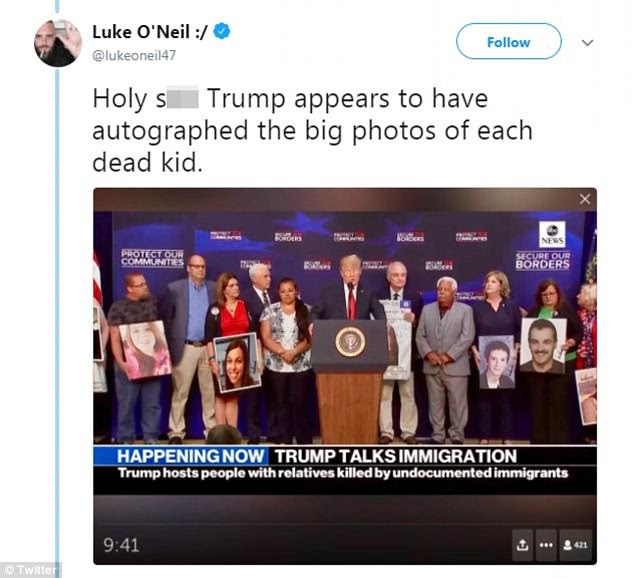 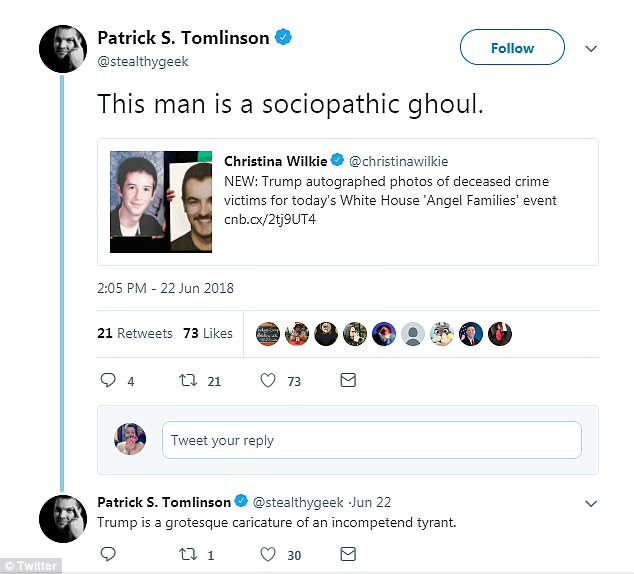 +9
At the somber event, Trump introduced the

families, who delivered heartbreaking tales of

their loved ones' lives and, at times, gruesome

descriptions of their deaths.
Trump said that one of the victims looked like the actor Tom Selleck, 'except better looking'.
'Your loss will not have been in vain,' Trump said. 'We will secure our borders, and we will make sure that they're properly taken care of.'
Posted by The Mexican Invasion & Occupation at 11:27 AM