WHY ILLEGALS LOVE TRUMP.... Incomes soaring! No (real) wall, no enforcement, no E-VERIFY 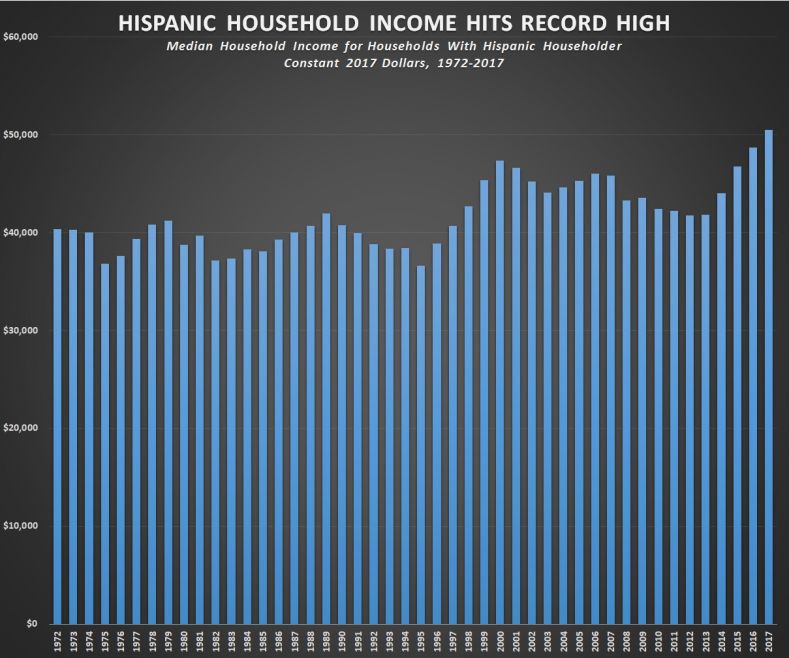 Mexican national Juan
Manuel Garcia-Rivas.
(CBP)
(CNSNews.com) -- Customs and Border Patrol (CBP) agents captured a previously deported illegal alien on Wednesday who had again crossed illegally into the United States. The Mexican national, a "Paisa" gang member, also had previously been convicted on charges of "Procurement of a Child for Sexual Exploitation" and "Criminal Attempt to Commit Sexual Assault of a Child."
CBP agents near El Paso spotted 23-year-old Juan Manuel Garcia-Rivas and another man crossing over the Rio Grande River. When agents approached, both suspects tried to flee back into Mexico but Garcia Rivas was captured.
"After being interviewed by agents, Garcia was transported to the El Paso Border Patrol Station for processing," stated the CBP in a press release.  "Garcia was fingerprinted, and his biometric information entered into several immigration and criminal databases.  Agents questioned him about his tattoos, and he admitted to being a 'Paisa' gang member."

(Image: YouTube)
"Once his information returned from the databases, agents discovered that Garcia was previously deported, and had been convicted on charges including 'Procurement of a Child for Sexual Exploitation,' and 'Criminal Attempt to Commit Sexual Assault of a Child,' stemming from a prior arrest in 2015," sid the CBP.
"The  convictions led to his five-year prison sentence in the Colorado Department of Corrections," stated the agency. "Garcia will be turned over to the El Paso County Detention Facility pending criminal prosecution for a reinstatement of his prior order of removal."
Commenting further on the issue, the CBP said, "This most recent arrest demonstrates the importance of securing our nation’s borders in the interest of ridding the country of undesirable criminal aliens. "

FOR EVERY ILLEGAL CAUGHT AT BORDER IT IS ESTIMATED THAT ABOUT 8 GET THROUGH AND ARE LOOTING US NOW!

NO TEST, NO BACKGROUND CHECKS ON CRIMINALITY, NO BACK TAXES, NO FINES.... JUST JUMP STRAIGHT TO VOTING BOOTHS! AND VOTE OFTEN!!!

In 2013, California lawmakers passed legislation that allowed illegal aliens to obtain driver’s licenses if they can prove to the Department of Motor Vehicle (DMV) their identity and state residency. The plan was one of the largest victories to date by the open borders lobby.… JOHN BINDER – BREITBART.com

‘Unbridled Immigration, Legal and Illegal, Is Taking the Country Down’

http://mexicanoccupation.blogspot.com/2015/07/mark-levin-unbridled-immigration-legal.html
This annual income for an impoverished American family is $10,000 less than the more than $34,500 in federal funds which are spent on each unaccompanied minor border crosser.
A study by Tom Wong of the University of California at San Diego discovered that more than 25 percent of DACA-enrolled illegal aliens in the program have anchor babies. That totals about 200,000 anchor babies who are the children of DACA-enrolled illegal aliens. This does not include the anchor babies of DACA-qualified illegal aliens. JOHN BINDER

THE STAGGERING COST OF THE WELFARE STATE MEXICO AND THE LA RAZA SUPREMACY DEMOCRAT PARTY HAVE BUILT BORDER to OPEN BORDER’
http://mexicanoccupation.blogspot.com/2017/10/spencer-p-morrison-devastating-cost-of.html

Mexico says we will simply tunnel under it and our LA RAZA DEMOCRAT PARTY will buy the shovels for us to do it!

Bristol County, Massachusetts, Sheriff Thomas Hodgson state in an open letter, issued on March 21, makes clear that the responsibility for the continued carnage of innocent Americans caused by those who shouldn’t be present in the country in the first place lies firmly in the lap of Congress.  “Because Congress has failed to enact the necessary reforms, our citizens and legal residents face even greater dangers, our national security is more vulnerable, and our enforcement efforts have been seriously compromised”
http://mexicanoccupation.blogspot.com/2018/03/dave-ray-388-sheriffs-in-40-states.html

2.     Hillary Clinton’s Democratic party: An executive nearly broke down crying because of the candidate’s loss. Not a single executive expressed anything but dismay at her defeat.
3.     Immigration: Maintaining liberal immigration in the U.S is the policy that Google’s executives discussed the most.

We spent eight months and did over a hundred interviews to try to bypass the usual rhetoric and get to the bottom of what really happened when undocumented workers showed up in one Alabama town. Pictured: Albertville “Miss Chick” 1954.

“Open border advocates, such as Facebook's Mark Zuckerberg, claim illegal aliens are a net benefit to California with little evidence to support such an assertion. As the CIS has documented, the vast majority of illegals are poor, uneducated, and with few skills. How does accepting millions of illegal aliens and then granting them access to dozens of welfare programs benefit California’s economy? If illegals were contributing to the economy in any meaningful way, CA, with its 2.6 million illegals, would be booming.” STEVE BALDWIN – AMERICAN SPECTATOR

Hudson noted that there is a backlog of more than 700,000 cases on UACs and that it can take “years” for the cases to work their way through the system.
Moreover, when children are placed in communities around the U.S., the government can lose track of them, and this can put them at risk.

BARACK OBAMA and the RISE OF THE MEXICAN FASCIST PARTY of LA RAZA ‘The Race’, now calling itself UNIDOSus.

TRUMP’S NAFTA SELL OUT… Now he goes back to building his pretend wall!

"The costs of illegal immigration are being carefully hidden by Democrats."
Accounting for these differences reveals that California's real poverty rate is 20.6 percent – the highest in America, and nearly twice the national average of 12.7 percent.
"The public schools indoctrinate their young charges to hate this country and the rule of law. Illegal aliens continue overwhelming the state, draining California’s already depleted public services while endangering our lives, the rule of law, and public safety for all citizens."

40% of all Federal Border Crimes are by invading Mexicans!

“The Democrats had abandoned their working-class base to chase what they pretended was a racial group when what they were actually chasing was the momentum of unlimited migration”.  DANIEL GREENFIELD / FRONT PAGE MAGAZINE

THE DEMOCRAT PARTY’S WAR ON AMERICA’S LEGAL WORKERS, BORDERS AND LAWS as they build the LA RAZA welfare state on our backs.
One in every eleven persons born in Mexico has gone to the U.S. The National Review reported that in 2014 $1.87 billion was spent on incarcerating illegal immigrant criminals….Now add hundreds of billions for welfare and remittances!  MICHAEL BARGO, Jr…… for the AMERICAN THINKER.COM
"Chairman of the DNC Keith Ellison was even spotted wearing a shirt stating, "I don't believe in borders" written in Spanish.

According to a new CBS news poll, 63 percent of Americans in competitive congressional districts think those crossing illegally should be immediately deported or arrested.  This is undoubtedly contrary to the views expressed by the Democratic Party.

Their endgame is open borders, which has become evident over the last eight years.  Don't for one second let them convince you otherwise." Evan Berryhill Twitter @EvBerryhill.

AMERICA’S OPEN BORDERS TO TERRORIST… as we defend the borders of every Muslim dictator on earth!

Recommended Video:
What is MS-13?

Charlie Daniels: We Need a Wall – But That’s Just the Beginning

“I believe that if Hillary had been elected she would have found a way to give amnesty and eventually citizenship to all the millions of Hispanics who are now here illegally and would have, in theory, have opened the border so that more and more could cross and be eligible to vote, until an undefeatable voting block would have been created, putting a more and more progressive electorate into power.” CHARLIE DANIELS

Even though it has gone virtually unreported by corporate media, Breitbart News has extensively documented the Clintons’ longstanding support for “open borders.” Interestingly, as the Los Angeles Times observed in 2007, the Clinton’s praise for globalization and open borders frequently comes when they are speaking before a wealthy foreign audiences and donors.

“If the Constitution did not forbid cruel and unusual punishment, the sentence I would like to see imposed would place both Bill and Hillary Clinton in the same 8-by-12 cell.”    ROBERT ARVAY – AMERICAN THINKER com

If you would like to report illegal aliens,
please call Immigration and Customs Enforcement (ICE) at 1-866-DHS-2ICE (347-2423). They will need to know names, locations (either work place or residence) and any other specific information you can provide. For more information, please visit www.ice.gov.
You may also contact the Border Patrol Sector where the illegal aliens are located, and ask them to investigate further.

(Screenshot)
Since Congress won’t act to secure the nation’s borders, Americans should “take their communities’ safety into their own hands,” the National Sheriffs’ Association (NSA) said, announcing a new crowdfunding site:

“The failure of Congress to create legitimate and comprehensive immigration reform for more than 20 years has dramatically undermined our ability to keep our communities safe. This not only puts our law enforcement at serious risk for danger, but further puts them in an untenable situation of violating our oath and promise to enforce the law.”

The crowdfunding site, www.SheriffsWall.org, promises that 100 percent of the tax-deductible donations will be used to secure the nation’s southern border.
The sheriffs warn that refusing to secure the border will cost Americans dearly, so now is the time for them to help provide law enforcement with vital resources:

“Further delay and inaction on immigration reform will cost more innocent lives, more financial hardships, and an even greater decline in the public trust that is essential to the preservation of our Republic.”
….
“Your donation helps us provide the resources necessary to help local law enforcement along the border take their communities’ safety into their own hands.”

Posted by The Mexican Invasion & Occupation at 2:17 PM