THE GLOBALIST REGIME FOR BILLIONAIRES - FRANCE HEADS TOWARDS REVOLUTION

French president Emmanuel Macron had broken a new record, becoming the most unpopular French president in history at this stage of his presidential term, according to recent polls which have also seen populist rival Marine Le Pen rise in popularity.

President Macron’s approval rating now registers at a mere 26 percent according to figures by pollsters BVA, who compared his current polling numbers to former presidents during the same era of their terms as leaders of France. 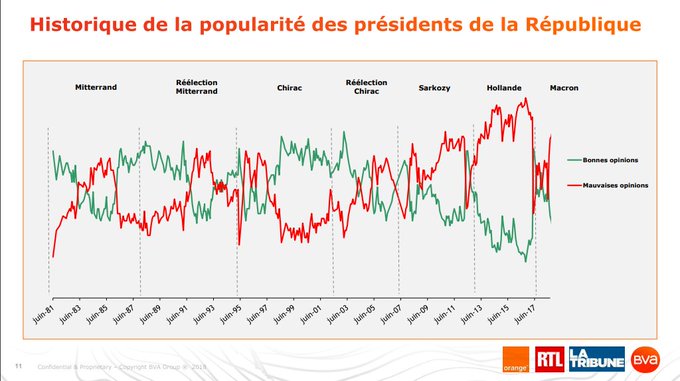 
Macron now polls even lower among the French than his predecessor, former President Francois Hollande, who eventually left office in 2017 with an approval rating in the single digits.
The current French leader’s popularity is even starker when compared to the last conservative French President Nicolas Sarkozy, who enjoyed an approval of nearly one in two French voters.
As Macron’s popularity has faded, the approval ratings of populist Rassemblement National leader Marine Le Pen, seen as Macron’s main political rival by many, has seen a dramatic increase. The BVA poll now sees Le Pen beating Macron with 27 percent to his 26 percent approval.


The unpopularity of President Macron has been one of the central focuses of the Gilets Jaunes or “Yellow Vests” movement against the rise of taxes on fuel which has seen protests across the country on the 17th and 24th of November.
The protests, which have seen over 100,000 people participate, blocked entrances and exits on major motorways and over the weekend blockaded much of central Paris.
While the movement has been largely peaceful, it has not been without several incidents of violence including the death of a protestor in the eastern Savoie region during the first protest who was killed by the driver of a car that sped into a group of Yellow Vest movement members.
In Paris, movement members clashed with police along the Champs Elysees, with Ms Le Pen among others claiming that far-left activists had infiltrated the movement in order to fight with police.
Le Pen has been a vocal supporter of the Yellow Vests whose movement has been described by leading French political scientists as a real grassroots populist movement.
Prominent French political scientist Jean-Yves Camus commented  on the movement saying, “This is the first time we’re seeing a mobilization that’s coming from the social networks, and not led by the political parties or the unions,” and added, “This is really a populist-type movement, and it’s an extremely strong protest against elite France.”
The movement has also seen the support of the vast majority of French with a poll taken by Odoxa finding that around 77 percent of the country supported the movement.

France: Macron to Address the Nation Amid 'Green' Tax Protests

WALL STREET AND THE SUPER RICH PREPARE BUNKERS FOR THE REVOLUTION
https://mexicanoccupation.blogspot.com/2018/11/revolution-spreads-across-france-wall.html
BANKSTERS AND BILLIONAIRES PREPARE FOR THE WORST.
REVOLUTION IS IN LOOMING AND WILL MARCH RIGHT DOWN WALL STREET FIRST.
https://mexicanoccupation.blogspot.com/2018/11/americas-billionaire-class-runs-scared.html

"A series of recent polls in the US and Europe have shown a sharp growth of popular disgust with capitalism and support for socialism. In May of 2017, in a survey conducted by the Union of European Broadcasters of people aged 18 to 35, more than half said they would participate in a “large-scale uprising.” Nine out of 10 agreed with the statement, “Banks and money rule the world.”

*
"The ruling class was particularly terrified by the teachers’ walkouts earlier this year because the biggest strikes were organized by rank-and-file educators in a rebellion against the unions, reflecting the weakening grip of the pro-corporate organizations that have suppressed the class struggle for decades."
*
“The yearly income of a typical US household dropped by a massive 12 percent, or $6,400, in the six years between 2007 and 2013. This is just one of the findings of the 2013 Federal Reserve Survey of Consumer Finances released Thursday, which documents a sharp decline in working class living standards and a further concentration of wealth in the hands of the rich and the super-rich.”
*
"The American phenomenon of record stock values fueling an ever greater concentration of wealth at the very top of society, while the economy is starved of productive investment, the social infrastructure crumbles, and working class living standards are driven down by entrenched unemployment, wage-cutting and government austerity policies, is part of a broader global process."
*
"A defining expression of this crisis is the dominance of financial speculation and parasitism, to the point where a narrow international financial aristocracy plunders society’s resources in order to further enrich itself."

Posted by The Mexican Invasion & Occupation at 9:51 AM