HALF OF ENGLAND OWNED BY LESS THAN 1% OF THE RICH - OLIGARCHS, BANKSTERS AND WINDSOR FAMILY DOLE SUCKERS - VISUALIZE REVOLUTION!

Revealed: How HALF of England is owned by less than ONE PER CENT of its population with oligarchs, City bankers and aristocracy among those with an 'astonishingly unequal' share 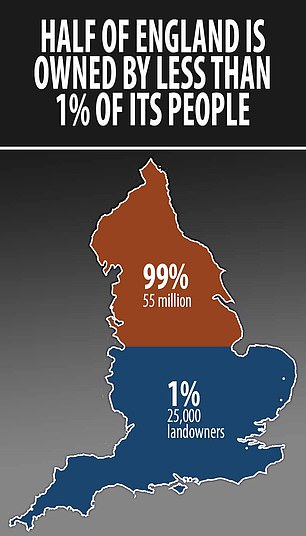 +6
This map shows how half of England is owned by less than one per cent of the population. Around 25,000 landowners, made up mostly of the aristocracy and corporations, control vast swathes of the country
Half of England is owned by less than one per cent of the population, new figures have revealed.
Analysis of Land Registry documents and maps for a new book shows just 25,000 landowners control huge swathes of the country despite the population being 55million.
The research found the 25,000 is mostly made up of members of the aristocracy and large corporations, with critics saying it shows how 'astonishingly unequal' the distribution of wealth is in England.
And the data was also used to create a full break down of land ownership across England, showing that the aristocracy alone holds 30 per cent of the country.
Another 18 per cent belongs to corporations while City bankers and oligarchs own 17 per cent of land.
Public sector bodies including councils and universities own another 8.5 per cent, with private homeowners, conservation charities and the Church of England owning around 7.5 per cent combined.
The research by activist and author Guy Shrubsole also shows that if the land was distributed equally across the entire population of 55million, each person would have around an acre of land.
It has been shared with The Guardian and shows major landowners include The Queen, businessman James Dyson and water firm United Utilities.
In his book, Mr Shrubsole wrote: 'A few thousand dukes, baronets and country squires own far more land than all of middle England put together.
'Land ownership in England is astonishingly unequal, heavily concentrated in the hands of a tiny elite.' 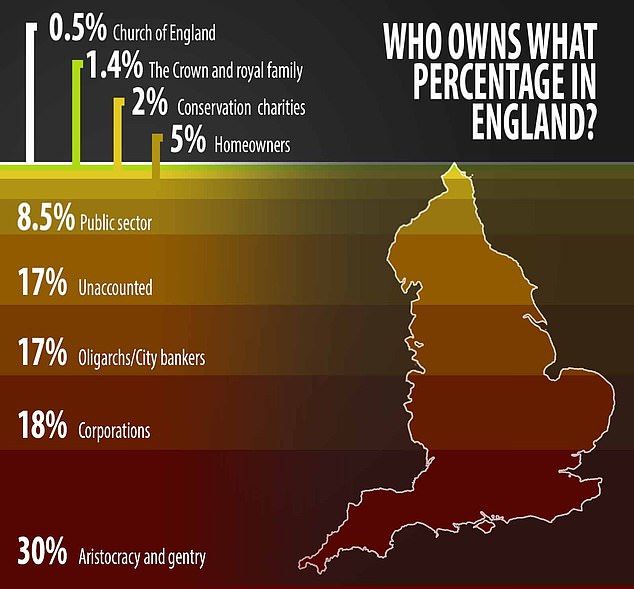 +6
This graph shows the full breakdown of land ownership in England and how much each sector owns. The aristocracy and gentry own 30 per cent, corporations 18 per cent and oligarch and City bankers 17 per cent. The 1 per cent of 25,000 landowners who own half of England are made up primarily of the aristocracy, corporations and the royal family 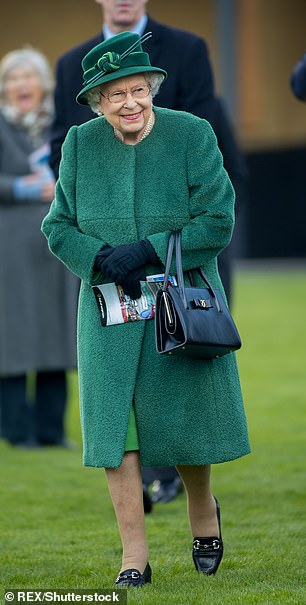 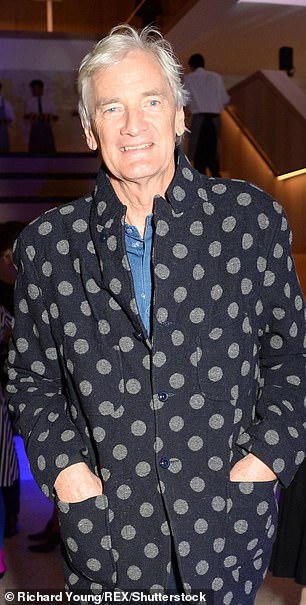 +6
Among the most prominent landowners in England are The Queen, left, and Royal Family, who own around 1.4 per cent, and businessman James Dyson, right, who owns thousands of acres of farmland in Lincolnshire. Business oligarchs and City bankers are believed to own around 17 per cent of land in England
Another 17 per cent of land in England is 'undeclared', which means it has not been sold on the open market and therefore does not have to be logged with the Land Registry.
It is likely this section also belongs to aristocrats who have kept it in their family for generations and never sold it.

Share
Among the prominent landowners in the aristocracy are the Duke of Buccleuch, who owns the Boughton estate in Northamptonshire, and the Duke and Duchess of Beaufort who own the Badminton estate in Gloucestershire.
The Royal Family is believed to hold around 1.4 per cent of English land through the Crown Estate and the Duchies of Cornwall and Lancaster. 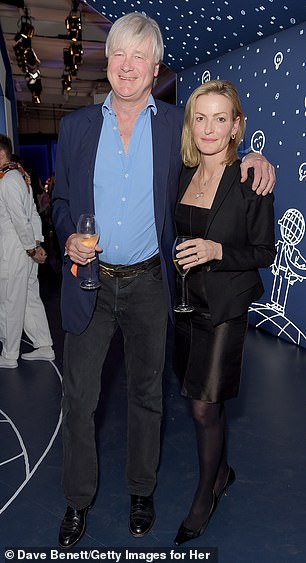 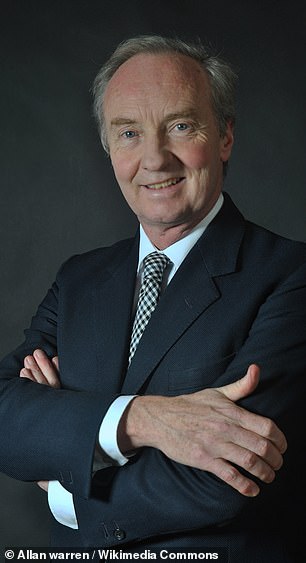 +6
The aristocracy owns about 30 per cent of land in England and critics say it shows they wield as much power and influence as they always have. Pictured left is the Duke and Duchess of Beaufort, who own the Badminton estate in Gloucestershire, and right is the Duke of Buccleuch, the largest private landowner in Scotland who also owns the Boughton estate in Northamptonshire
The findings led to calls for a debate in Parliament as critics claim it is 'unfair' that aristocrats and corporations have 'more influence over neighbourhoods than the people who live there'.
Labour shadow minister Jon Trickett told the Guardian: 'The dramatic concentration of land ownership is an inescapable reminder that ours is a country for the few and not the many.'
Carys Roberts, chief economist at thinktank The Institute for Public Policy Research, added the figures were 'shocking but not surprising' and that it revealed that the aristocracy is still as important in modern society 'in terms of wealth and power' as it was in past centuries.
The book reveals the public sector, ie councils and universities, owns around eight per cent of the country and is the most 'open' sector around land holdings because such institutions frequently sell off sections.
Meanwhile charities including the National Trust own around two per cent of the country, with the church holding around 0.5 per cent.
Posted by The Mexican Invasion & Occupation at 2:22 PM