THE (REALITY) OF THE GLOBALIST DEMOCRAT PARTY AS IT SERVES THE RICH, “CHEAP” LABOR ILLEGALS and MUSLIMS:

Anti-Semitic, open borders for cheaper labor and funded by criminal banksters… and these pols are making vast fortunes sucking the blood of America!

We must not let them cheat their way to power over the rest of us.  Their ongoing vote fraud must be stopped and the Democrats need to take a look at themselves and at what they have become. It's not a pretty picture.  What they have become threatens to destroy the greatest nation on the planet and they are doing it on purpose.  They have nothing but contempt for the US as founded and for those of us who love this country. PATRICIA McCARTHY – AMERICAN THINKER

“Then we suffered the rattling election of Barack Obama, whose active membership in a white-, Jewish-, and America-hating church was well known to the electorate.  His close personal relationship with the likes of his adored Rev. Jeremiah Wright and Louis Farrakhan was no secret.  Obama was open about his goals.  He told us he was out to "fundamentally transform America" and the world.”  ALAN BERGSTEIN

“There is a deep racist and anti-Semitic disease in the leadership of the Democrats. As Senator Cory Booker brings his hatred for the Jewish State to the Senate, he should be asked whether he agrees with his hero, “The only good Zionist is a dead Zionist we must take a lesson from Hitler”. DANIEL GREENFIELD

“Of course, one of the main reasons the nation is now “divided, resentful and angry” is because race-baiting, Islamist, class warrior Barack Hussein Obama was president for eight long years." MATTHEW VADUM

*
"But the Obamas are the center of the most delusional cult of personality that the media has yet spawned. And so we get bizarre pieces like these." MONICA SHOWALTER

*
"Along with Obama, Pelosi and Schumer are responsible for incalculable damage done to this country over the eight years of that administration." PATRICIA McCARTHY

Louis Farrakhan insults Christian beliefs (and Jews, of course), claims he is Jesus

Louis Farrakhan is a poisonous figure in our society, an open Jew-hater and religious extremist with crackpot beliefs. He ought to be shunned by all legitimate political leaders, yet national figures among the Democrats like Bill Clinton and Barack Obama cozy up to him. (Obama managed to successfully suppress publication of a picture of him being chummy with the hater, with the assistance of the corrupt media.)
Farrakhan doesn’t even bother to hide his bizarre beliefs. On Saturday, he issued a tweet with a video snippet that is truly appalling: 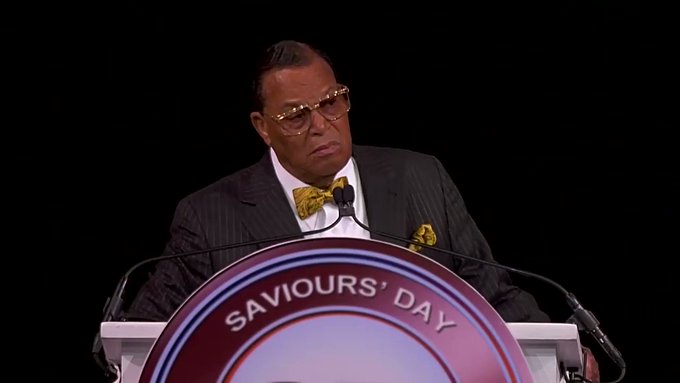 God does not love this world. God never sent Jesus to die for this world. Jesus died because he was 2,000 years too soon to bring about the end of the civilization of the Jews. He never was on no cross. There was no Calvary for that Jesus.

I don’t know which is more alarming: the fact that he has a substantial movement that he leads, or that Democrats are willing to align themselves with him. Democrats use the false allegation that Donald Trump justified neo-Nazis at Charlottesville (he was talking about people who wished to preserve statues of Confederates) as a smokescreen to mask their own tolerance of and coziness with a hateful lunatic.
God help us.
Graphic credit: Twitter
Posted by The Mexican Invasion & Occupation at 7:49 AM