The FBI released its official crime tally for 2016 today, and the data flies in the face of the rhetoric that professional athletes rehearsed in revived Black Lives Matter protests over the weekend.  Nearly 900 additional blacks were killed in 2016 compared with 2015, bringing the black homicide-victim total to 7,881. Those 7,881 “black bodies,” in the parlance of Ta-Nehisi Coates, are 1,305 more than the number of white victims (which in this case includes most Hispanics) for the same period, though blacks are only 13 percent of the nation’s population. The increase in black homicide deaths last year comes on top of a previous 900-victim increase between 2014 and 2015.
Who is killing these black victims? Not whites, and not the police, but other blacks. In 2016, the police fatally shot 233 blacks, the vast majority armed and dangerous, according to the Washington Post. The Post categorized only 16 black male victims of police shootings as “unarmed.” That classification masks assaults against officers and violent resistance to arrest. Contrary to the Black Lives Matter narrative, the police have much more to fear from black males than black males have to fear from the police. In 2015, a police officer was 18.5 times more likely to be killed by a black male than an unarmed black male was to be killed by a police officer. Black males have made up 42 percent of all cop-killers over the last decade, though they are only 6 percent of the population. That 18.5 ratio undoubtedly worsened in 2016, in light of the 53 percent increase in gun murders of officers—committed vastly and disproportionately by black males. Among all homicide suspects whose race was known, white killers of blacks numbered only 243.
Violent crime has now risen by a significant amount for two consecutive years. The total number of violent crimes rose 4.1 percent in 2016, and estimated homicides rose 8.6 percent. In 2015, violent crime rose by nearly 4 percent and estimated homicides by nearly 11 percent. The last time violence rose two years in a row was 2005–06.  The reason for the current increase is what I have called the Ferguson Effect. Cops are backing off of proactive policing in high-crime minority neighborhoods, and criminals are becoming emboldened. Having been told incessantly by politicians, the media, and Black Lives Matter activists that they are bigoted for getting out of their cars and questioning someone loitering on a known drug corner at 2 AM, many officers are instead just driving by. Such stops are discretionary; cops don’t have to make them. And when political elites demonize the police for just such proactive policing, we shouldn’t be surprised when cops get the message and do less of it. Seventy-two percent of the nation’s officers say that they and their colleagues are now less willing to stop and question suspicious persons, according to a Pew Research poll released in January 2016. The reason is the persistent anti-cop climate.
Four studies came out in 2016 alone rebutting the charge that police shootings are racially biased. If there is a bias in police shootings, it works in favor of blacks and against whites. That truth has not stopped the ongoing demonization of the police—including, now, by many of the country’s ignorant professional athletes. The toll will be felt, as always, in the inner city, by the thousands of law-abiding people there who desperately want more police protection.
Heather Mac Donald is the Thomas W. Smith Fellow at the Manhattan Institute and a contributing editor of City Journal.

By Matthew Wright For Dailymail.com

A Californian eight-year-old boy was beaten to death by his mother's ex-boyfriend while he was trying to protect his younger sister from molestation.
Dante Daniels was attacked by Deandre Chaney Jr., 23, with a hammer on September 1st in South Sacremento, California. He never made it to his second day of third grade.
According to a criminal report, Chaney Jr. was engaged in the crime of committing a lewd act on Danae, Dante's seven-year-old sister. 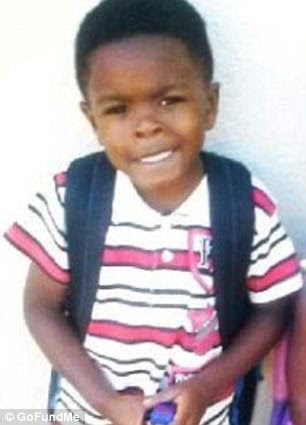 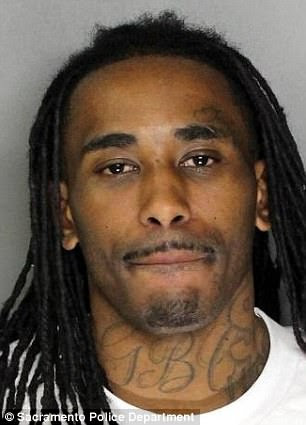 +7
Dante Daniels, eight,  was attacked by Deandre Chaney Jr., 23, with a hammer on September 1st in South Sacremento, California, while trying to protect his sister
Video playing bottom right...
Loaded: 0%
Progress: 0%
0:08
Pause
Unmute
Current Time0:08
/
Duration Time1:48
Fullscreen
ExpandClose
'Trying to save his sister from this child molester, and that's why he was beat the worst,' said Dante's grandmother, Monique Brown, to KFVS 12.

Share
The suspect also used a hammer and knife on Danae, as well as their mother, 28-year-old Elizabeth Salone.
He is also said to have used lighter fluid. 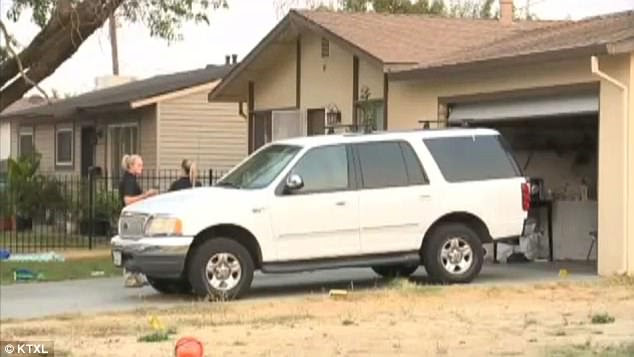 +7
According to a criminal report, Chaney Jr. was engaged in the crime of committing a lewd act on Danae, Dante's seven-year-old sister 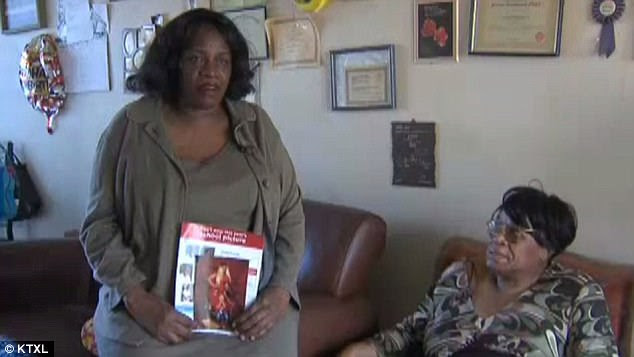 +7
'Trying to save his sister from this child molester, and that's why he was beat the worst,' said Dante's grandmother, Monique Brown, to KFVS 12 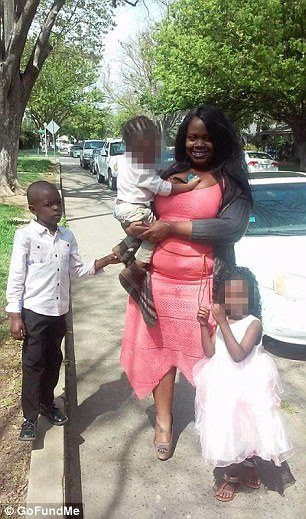 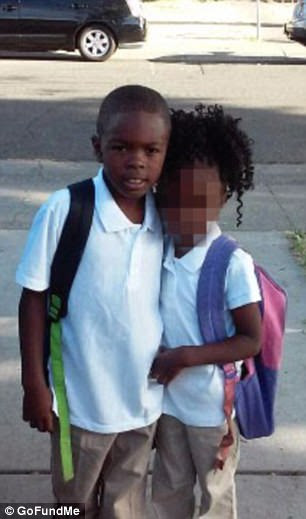 +7
The suspect also used a hammer and knife on Danae, as well as their mother, 28-year-old Elizabeth Salone
Dante was declared brain dead following the attack and died six days later.
Both his sister and mother survived, but Brown has said that Monique won't be able to see out her left eye and Danae will need a lot of help.
And the grandmother believes her little one is a hero, even after death. 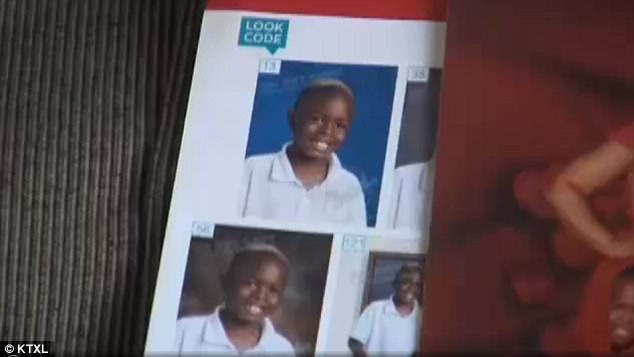 
Womb-raiding childhood friend 'cut mother-to-be's throat on her wedding day so she couldn't scream before cutting out her whole uterus, stealing her baby and dumping deflated organ on bathroom floor'


66
View comments
A Bronx woman is accused of methodically cutting her childhood friend's throat on her wedding day so she couldn't scream before cutting her entire uterus out to steal her baby girl before dumping the deflated organ on the bathroom floor.
Angelikque Sutton, 22, was nearly nine months pregnant and on her way to the courthouse to marry Patrick Bradley when she stopped by the Bronx home of her friend, Ashleigh Wade in 2015.
But Wade, who unsuspectingly lured Sutton to the apartment by promising her a gift, had other plans for Sutton, prosecutors said during the opening statements of her first-degree murder trial on Monday.
Wade allegedly cut Sutton's throat, preventing her to scream before cutting her baby girl from her womb.
'This was an attack that took place in stages,' Assistant Bronx DA Meredith Holtzman told the jury during Wade's trial. 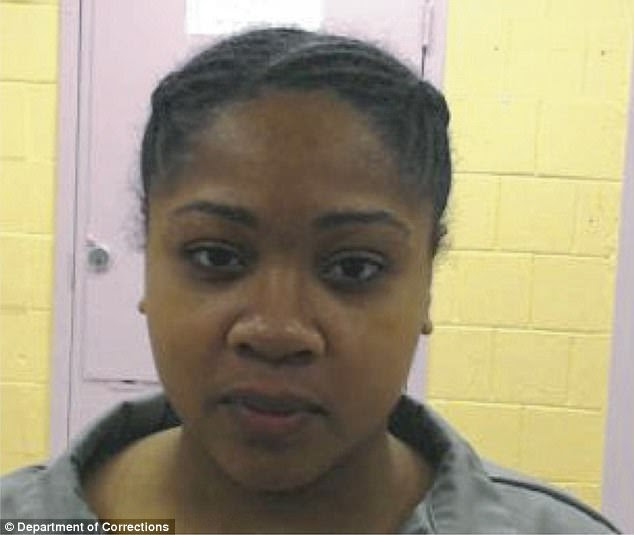 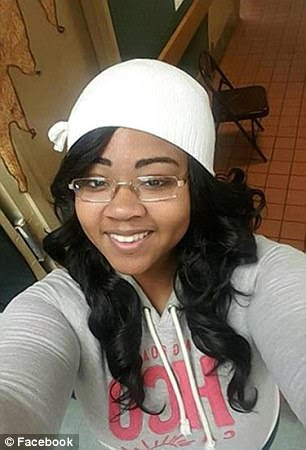 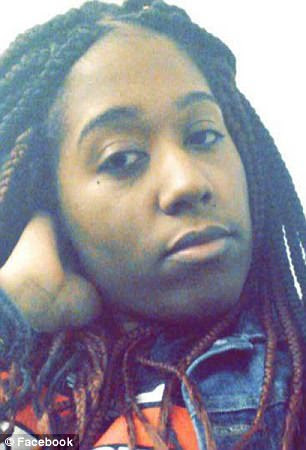 +5
Ashleigh Wade (left) has pleaded not guilty to killing Angelikque Sutton (right). Wade was found cradling Jenasis next to her mother's body in 2015. On the first day of Wade's trial Monday, jurors were shown grisly photos of the bloody crime scene
She said Wade had feigned pregnancy in the months prior to the horrific murder.
'The defendant attacked Ms. Sutton by stabbing and slashing her repeatedly in the face and neck,” Holtzman said.
'The defendant cut Ms. Sutton's larynx​ ​— her voice box. Ms. Sutton could not scream, could not say a word. She cut her major blood vessels.
'What the defendant did to her next is almost unspeakable.
'Because after she had rendered Ms. Sutton unable to scream, unable to move, the defendant took a kitchen paring knife and sliced Ms. Sutton's abdomen open at the bottom half.
'Once she had cut Ms. Sutton's abdomen open, the defendant cut Ms. Sutton's uterus entirely out. She cut that uterus open, took baby Jenasis out, and discarded that uterus on the bathroom floor.'
Jurors were shown grisly photos of the bloody crime scene along with Sutton's butchered remains and her deflated uterus that was left on the bathroom floor.
Amazingly, Sutton's daughter survived the vicious attack and is now a thriving 22-month-old. 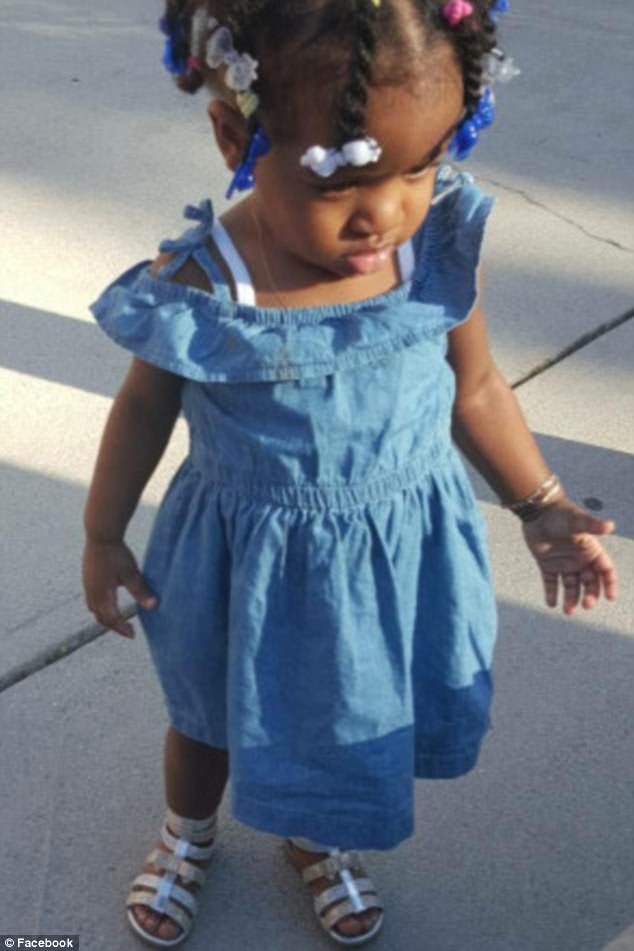 +5
Jenasis Bradley (above) turns two years old in November. The beautiful tot amazingly survived being cut out of her mother allegedly by Wade in 2015
Holtzman called the girl's survival'proof of the calculation and precision of the attack.'
'The defendant needed for Ms. Sutton to die, and she needed for Jenasis to live,' Holtzman said, as she later explained how Wade told friends and family members she was pregnant.
'She had baby clothes, baby shoes, diapers, formula, a crib, everything that an expectant mother would need, except a baby.
'She didn't have a baby. For that she needed Angelikque Sutton.'
Wade's defense attorney, Amy Attias, said that her client did not 'intentionally' kill Sutton and that 'something could have gone horribly and terribly and tragically wrong within Ms. Wade's own mind.'
Police arrived at the crime scene in Wakefield roughly 30 minutes after the November 2015 killing. 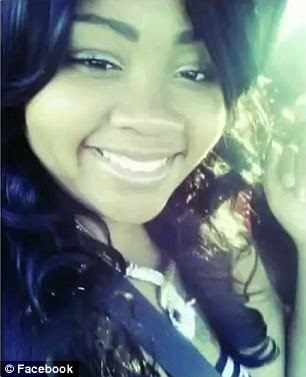 +5
Wade (above) allegedly told police at the crime scene she knifed Sutton 'as many times as she could'
Wade was found by her boyfriend cradling Jenasis next to her mother's body.
She also screamed at police 'It's my baby!' as they took her into custody.
NYPD office Jonathan Polanco Ortiz who had arrived to the crime scene in 2015 testified on Monday that it 'left a mark on his soul.'
Ortiz said that Wade confessed to the grisly murder when she saw police.
When asked how many times she knifed Sutton, Ortiz said Wade responded, 'As many times as I could.'
During the opening day of the trial, Sutton's father testified that he and his wife had first heard about the viscous attack on the news, but did not know it was their daughter.
'We saw on television that there had been a young lady who was attacked,and we were saying how terrible it was — not knowing that was our daughter,' Bishop William Sutton told the jury as his wife, Deborah, cried in the audience.
Sutton's husband-to-be and father of her child, sat and listened to the horrific details in court.
Bradley, who had been dating Sutton for eight years at the time she was killed, posts photos of his daughter on Facebook showing she is happy and even learning how to box.


LET US STOP THE POLITICALLY CORRECT CRAP ABOUT THE VIOLENCE OF GHETTO BLACKS IN THIS COUNTRY.

DID WHITEY CAUSE THESE APES TO MURDER A PIZZA MAN IN COLD BLOOD?

CHICAGO’S BLACK GANG LAND…. Is what happens when bankster Rahm Emanuel and his corrupt Obama party turned the city under!

American Blacks have run out of excuses!

LIFE DOES NOT MATTER TO GHETTO BLACKS ANYWHERE!

They’re the ones that murder each other when they’re not aborting!

Cousins allegedly shot and killed a pizza deliveryman in Wisconsin before eating the pie from his bag while it was still warm.
Mekael Kennedy, 17, and his cousin D'Andre Kennedy, 25, of Milwaukee, have been charged in connection to the murder of 60-year-old Clarence Taper, a grandfather.
Taper worked for Buddy's Pizza and Steak in Milwaukee, was killed September 11 while delivering a pie to the apartment where the cousins were, according to TMJ4.com. 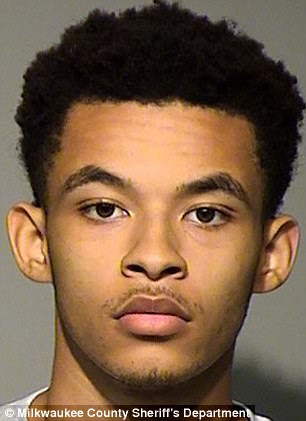 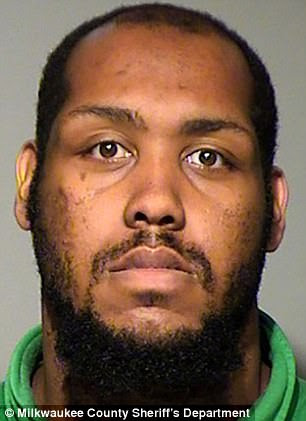 +5
Mekael Kennedy, 17,  left, allegedly shot and killed a pizza deliveryman along with his cousin and D'Andre Kennedy, 25, on September 11th 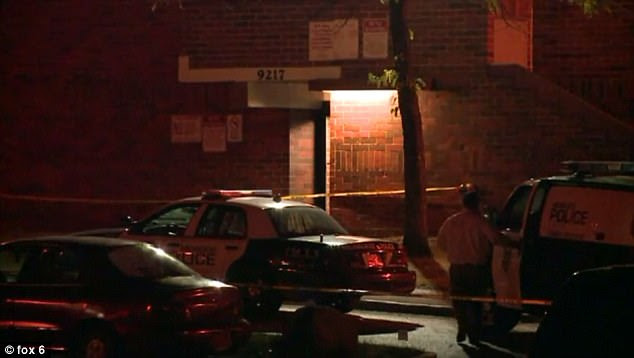 +5
Pizza deliveryman Clarence Taper, who worked for Buddy's Pizza and Steak in Milwaukee, was killed while delivering a pie to the apartment where the cousins were

Share
Mekael worse a hockey mask and allegedly took D'Andre's gun before demanding Taper's money when he came to the door with the pizza delivery. 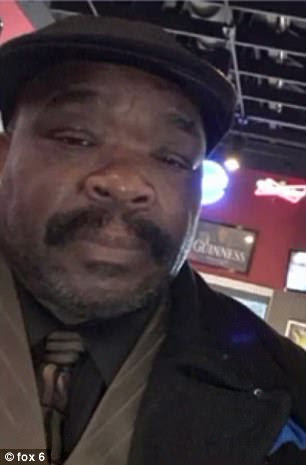 +5
Clarence Taper, 60, worked for Buddy's Pizza and Steak in Milwaukee and was shot to death
A police report states how a gun was fired hitting Taper, however Mekael protested to police that he thought he had the safety on and did not know why the weapon fired.
Despite allegedly shooting and killing the deliveryman, the cousins still ended up eating the pizza that was being delivered to their door.
Mekael claimed Taper had lunged at him before the shooting.
D'Andre also colluded with his cousin telling cops that Mekael shot Taper because he attempted to take Mekael's hockey mask off.
During interviews with police, Mekael admitted he had also robbed a Papa John's delivery driver earlier that week.
The teen has been charged as an adult with armed robbery and murder. He now faces up to 95 years in prison.
D'Andre was charged with harboring a felon and obstructing an officer and could face four years behind bars. 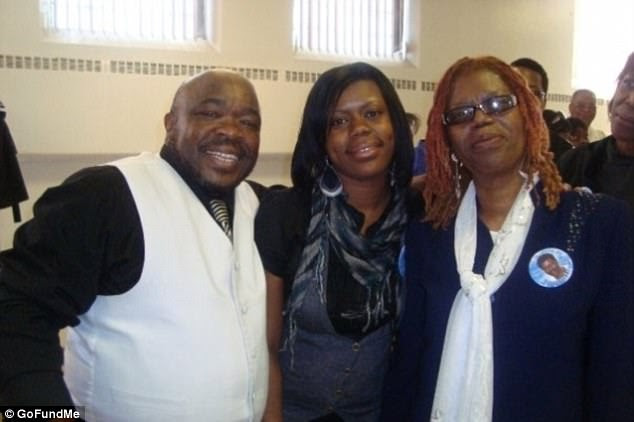 Posted by The Mexican Invasion & Occupation at 4:26 PM No comments: