REYNOSA, Tamaulipas — As cartel violence continues to terrorize this border city, a leaked video appears to show teams of cartel gunmen holding a prayer meeting before heading out to commit unspeakable acts of violence. Nine days of ongoing cartel violence have led to 25 deaths including at least one police officer and one innocent bystander. 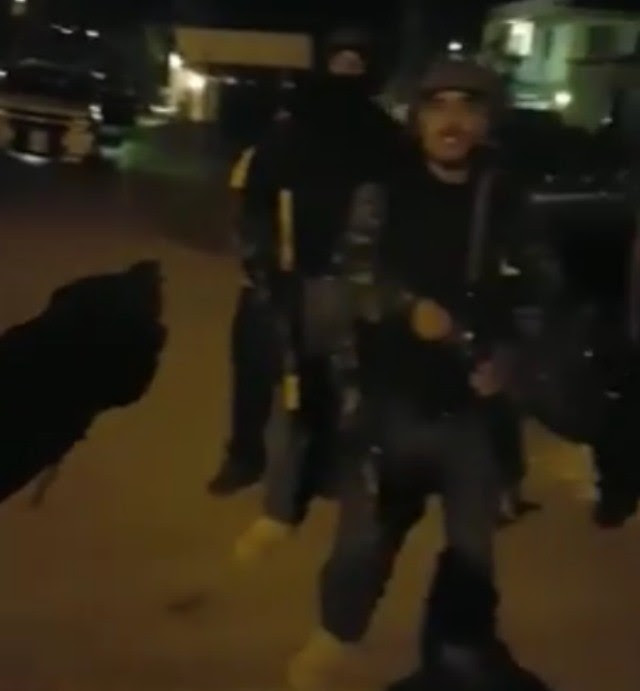 The gunmen line up in front of an authority figure within the cartel and they begin to loudly recite a prayer in Spanish. The short video ends with the group shouting praises for the Gulf Cartel.
The video appears to have been taken at night or during the early morning hours in the streets of Reynosa by one of the Gulf Cartel gunmen at the gathering. While the date of the video remains unclear, for more than one week, the border city of Reynosa has been ground zero for a fierce territorial war between rival cartel factions. 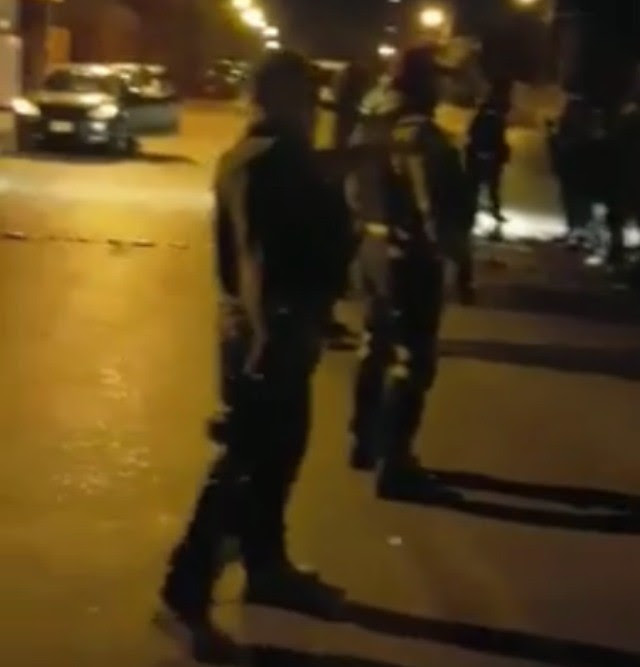 As Breitbart Texas previously reported, the raging violence has spread terror throughout the city as convoys of gunmen continue to roam the streets searching out rival forces. State officials have confirmed to Breitbart Texas 25 casualties including one police officer and one street food vendor who was caught in the crossfire.
Editor’s Note: Breitbart Texas traveled to the Mexican States of Tamaulipas, Coahuila, and Nuevo León to recruit citizen journalists willing to risk their lives and expose the cartels silencing their communities.  The writers would face certain death at the hands of the various cartels that operate in those areas including the Gulf Cartel and Los Zetas if a pseudonym were not used. Breitbart Texas’ Cartel Chronicles are published in both English and in their original Spanish. This article was written by “A.C. Del Angel” from Reynosa, Tamaulipas.

Texas Governor Greg Abbott said law enforcement and other officials implementing sanctuary policies that release criminal aliens with immigration detainers will now be subject to the “stiffest penalties in America.” He also rebutted the hype and fear mongering being spread by some legislators, liberal chiefs of police, sheriffs, and media outlets.

Abbott’s comments came during an exclusive interview with Breitbart Texas immediately following his signing of the historic bill that effectively outlaws sanctuary jurisdictions in the Lone Star State. The new law creates civil and criminal penalties for those who refuse to cooperate with immigration officials and provides for jail time for a sheriff or police chief who releases a criminal alien subject to an immigration detainer. He also took the opportunity to counter the claims that this is a “show me your papers” law and is somehow unconstitutional.
Democrat legislators and left-of-center Texas news outlets claims about the constitutionality of a provision in the law allowing police officers to inquire about the immigration status of someone they have detained drew pointed criticism from the governor. In an article published April 29 in the Dallas Morning News, State Representative Rafael Anchia (D-Dallas) said SB4 is unconstitutional because states are pre-empted by federal law in the area of immigration and are not permitted to conduct their own investigation. “The Supreme Court struck down most of the provisions of the Arizona immigration law on this basis.”
Abbott told Breitbart Texas this article “directly misstated what the legal status of this law was out of the U.S. Supreme Court – in the Arizona decision.”
“The so-called controversial part of this law is what some label as the “show your papers” component,” the Texas governor explained. “And what everyone seems to get wrong is they think that that provision was stricken down in the Arizona law. To the contrary, the provision in the Arizona law is stricter than the Texas law. The Arizona law required that law enforcement ASK for papers. The Texas law does not require it, it allows it so there is that one difference.”
“But despite that difference, the Arizona law was upheld by every U.S. Supreme Court justice, including the liberals,” he said emphatically. “The so-called controversial part of this law has been ruled on by the U.S. Supreme Court and upheld,” the governor emphasized.
Abbott reassured American citizens living in Texas this bill does nothing to change their daily lives. “For American citizens, this bill has no impact on them whatsoever, and they have absolutely nothing to be concerned about,” Abbott reassured. “There’s only one group of people that is targeted by this legislation and that is people who are in this country illegally, who have committed violent crimes, and are subject to an ICE detainer request.”
“No one has to do anything different from the way they’ve been operating their lives before this law was signed,” he said referring to a situation where someone is stopped for a traffic violation, ”because it poses no danger, no challenge, no difficulty, for any American citizen.”
The law’s author, Senator Charles Perry (R-Lubbock), said police can already inquire about the immigration status of a person they detain, during a Q&A on the Senate Floor during final passage of the bill. He said this bill doesn’t change anything in this regard and citizens and legal residents do not need “carry papers” to prove they are here legally.
The new law does pose a threat to law enforcement officials who choose to ignore detainer requests on illegal immigrants in their jails from immigration officials.
“All law enforcement officers are going to be required to follow this law,” the governor stated. “If they refuse to follow this law, or if they adopt sanctuary city policies, they are subject now to the stiffest penalties in America for adopting sanctuary city policies – which includes jail time where sheriffs could wind up in the same jail they may be releasing inmates from who are the subject of ICE detainer requests.”
“But these officials also are subject to a removal action,” he advised, “and the counties or cities in which they operate are subject to very stiff fines.” The governor said these fines can go up to $25,000 per day. The law makes ignoring an immigration detainer a Class A misdemeanor, Breitbart Texas reported.
Referring to Travis County Sheriff Sally Hernandez and Dallas County Sheriff Lupe Valdez, who have either ignored or threatened to ignore immigration detainers, Abbott said they must come into compliance with the law. “If they don’t change their policies, if they continue to handle detainers on a case-by-case basis that means they will be in violation of this law and subject to its penalties,” he said firmly.
Governor Abbott explained that he believes this law will make Texas a safer place and help avoid tragedies like what happened in the sanctuary city of San Francisco with the murder of Kate Steinle by a previously deported illegal alien released from the local jail.
“This law makes Texans safer because it prevents the types of policies that California has that lead to the tragic murder of Kate Steinle. It prevents the types of policies that were adopted by the Travis County sheriff who had policies that release back out on the street, people who are either accused of, or even convicted of, very dangerous crimes and so Texas is going to be a safer place by ensuring that law enforcement will work with federal officials to ensure that we keep behind bars, and remove from this country, those who pose a danger to our fellow Americans.”
The new sanctuary city law goes into effect September 1, 2017.
Bob Price serves as associate editor and senior political news contributor for Breitbart Texas. He is a founding member of the Breitbart Texas team. Follow him on Twitter @BobPriceBBTX and Facebook.

more at this link:

five percent of them (or 225,390) were convicted criminal

aliens, the largest number of criminal aliens removed in

MICHELLE MALKIN: another brutal murder by

another illegal criminal long on the loose in our

MEXICANS HAVE MURDERED NEARLY 3,000 AMERICANS IN TEXAS’ OPEN  BORDERS  SINCE 2008.

BUILDING THE MEXICAN CARTELS IN THE AMERICAN BURBS!

THE STAGGERING  COST OF AMNESTY: non-enforcement is another form of AMNESTY!
Legals to pay trillions for open borders and Mexico’s looting
http://mexicanoccupation.blogspot.com/2016/11/the-cost-of-amnesty-legals-will-pay.html
Between one-quarter and one-third of the 1.5 million new arrivals in 2014 were illegal aliens, meaning that a conservative estimate is that 1,000 illegal aliens a day are moving to the United States.

THE STAGGERING  COST OF AMNESTY: non-enforcement is another form of AMNESTY!
Legals to pay trillions for open borders and Mexico’s looting
http://mexicanoccupation.blogspot.com/2016/11/the-cost-of-amnesty-legals-will-pay.html
Between one-quarter and one-third of the 1.5 million new arrivals in 2014 were illegal aliens, meaning that a conservative estimate is that 1,000 illegal aliens a day are moving to the United States.

MEXICANS HAVE MURDERED NEARLY 3,000 AMERICANS IN TEXAS’ OPEN  BORDERS  SINCE 2008.

BUILDING THE MEXICAN CARTELS IN THE AMERICAN BURBS!

ANOTHER LA RAZA RAPE of a CHILD
NO ONE TOLD THE MEX RAPIST WE HAVE BORDERS!

*
Law enforcement officials in East Texas are reporting the alleged murderer of 10-year-old Kayla Gomez-Orozco is a previously deported illegal alien from Mexico.

"While the Obama Administration downplays violence along the U.S.-Mexico border, authorities in Texas reveal that Mexican  have transformed parts of the state into a war zone where shootings, beheadings, kidnappings and murders are common."


This is one of those stories that got lost in the U.S. election and the first 120 days of the Trump presidency. &nbsp; Sadly, and I say so because I have many great contacts south of the border, Mexico is a rather dangerous place,&nbsp;according t...

Those 'bad hombres' down in Mexico


This is one of those stories that got lost in the U.S. election and the first 120 days of the Trump presidency.
Sadly, and I say so because I have many great contacts south of the border, Mexico is a rather dangerous place, according to a new report:

It was the second deadliest conflict in the world last year, but it hardly registered in the international headlines.
As Syria, Iraq and Afghanistan dominated the news agenda, Mexico's drug wars claimed 23,000 lives during 2016 – second only to Syria, where 50,000 people died as a result of the civil war.
"This is all the more surprising, considering that the conflict deaths [in Mexico] are nearly all attributable to small arms," said John Chipman, chief executive and director-general of the International Institute for Strategic Studies (IISS), which issued its annual survey of armed conflict on Tuesday.
"The wars in Iraq and Afghanistan claimed 17,000 and 16,000 lives respectively in 2016, although in lethality they were surpassed by conflicts in Mexico and Central America, which have received much less attention from the media and the international community," said Anastasia Voronkova, the editor of the survey.

Of course, Mexico disputed the findings, as we see via Fausta.
My guess is that their concern is that U.S. tourists will stay away from the popular beach resorts if they read these headlines.  Worse than that, the U.S. Department of State could issue travel warnings, as it did before for Easter vacations.
Frankly, Mexico is right that the violence does not affect tourists in Cancún or other popular destinations.  Nevertheless, it is happening in Mexico.
Everything is further complicated by the reality that cartels are running wild and controlling portions of the U.S.-Mexico border.  Also, the fighting has been intense in places like Tamaulipas, a state south of Texas.
So what happens next?
It will be interesting to see what President Peña-Nieto and President Trump talk about on the phone or in person.
I wouldn't be surprised if Mr. Peña-Nieto whispers in Mr. Trump's ear: "Amigo, can you give us a hand fighting these bad hombres?"
P.S. You can listen to my show (Canto Talk), (YouTube) and follow me on Twitter.
Posted by The Mexican Invasion & Occupation at 8:32 AM No comments: