Mexico Finds 2 Border Tunnels Leading from Tijuana Into U.S.: MEXICO CITY (AP) — Mexican police and soldiers have discovered two tunnels in the border city of Tijuana that lead into California.

MEXICO CITY (AP) — Mexican police and soldiers have discovered two tunnels in the border city of Tijuana that lead into California.
The tunnels were found in an area of warehouses across from Otay Mesa.
Prosecutors said Monday that one of the tunnels reached to San Diego, California, and the other was unfinished.
The Attorney General's Office said the tunnels were apparently used by the Sinaloa drug cartel to move drugs into the United States.
It said it found the tunnels after the U.S. consulate in Tijuana determined the tunnels were being reactivated after apparently falling into disuse.

A 15-year-old Mexican boy driving a minivan near the Texas-Mexico border was arrested Thursday for attempting to transport $1.1 million worth of marijuana into the United States, according to a U.S. Customs and Border Protection press release issued Monday. Border Patrol agents working near the Harlingen Station in the Rio Grande Valley on Thursday morning witnessed large bundles being loaded into a red minivan. The agents followed the van until the driver pulled over, jumped out of the car and ran away. Agents successfully chased down the driver. An inspection of the van yielded 1,380 pounds of marijuana, which have an estimated U.S. street value of more than $1 million, according to the release. This is a prime example of how transnational criminal organizations are exploiting the youth. These young lives are deliberately put in danger for the profit of smuggling drugs and immigrants, chief patrol agent Manuel Padilla Jr. said in a statement. We continue to work with the community by presenting to local schools warning our children of the outcomes of working for these organizations, not only by potentially facing prison time, but also death.

GRANJENO, Texas — Breitbart Texas encountered a total of 43 illegal immigrants in various groups in less than two hours as they were walking two miles north of the Rio Grande. The migrants, primarily from El Salvador, were looking for U.S. Border Patrol agents to pick them up.

The discovery of the various groups of illegal immigrants easily crossing into Texas comes at a time when U.S. Customs and Border Protection has been forced to acknowledge the record setting uptick in human smuggling after months of claiming the trends were below 2014 figures. Breitbart Texas reported that members of the National Border Patrol Council had accused CBP of trying to keep the record-setting numbers out of the public eye until after the 2016 Election.
While visiting a privately owned tract of land two miles from the Rio Grande in an area long touted by politicians as being part of a “secure” border region, this reporter encountered 43 illegal immigrants who were walking north from the river. The area visited by Breitbart Texas is used by the Gulf Cartel to move illegal immigrants from Central America and countries other than Mexico, while Mexican nationals, convicted criminals and previously deported aliens are moved through a separate area further west. In Starr County, Texas, the Gulf Cartel also moves the bulk of their drugs–taking advantage of the lacking physical border  barriers and decreased presence of law enforcement. This reporter initially encountered a group of eight illegal immigrants including women and children, all from El Salvador.
Santos Aquino, an illegal immigrant from El Salvador, spoke with Breitbart Texas claiming they had fled from their home country out of fear of the raging gang violence there. During the short interview, Aquino said he hoped to get to New York to meet up with his wife and children and encouraged others to make the journey. The man said the U.S. was a blessed country and God would reward its kindness.
Moments after Aquino’s group left, Breitbart Texas encountered another group of 10 illegal immigrants from El Salvador. The children in the group were thirsty and asked if they could have some water. 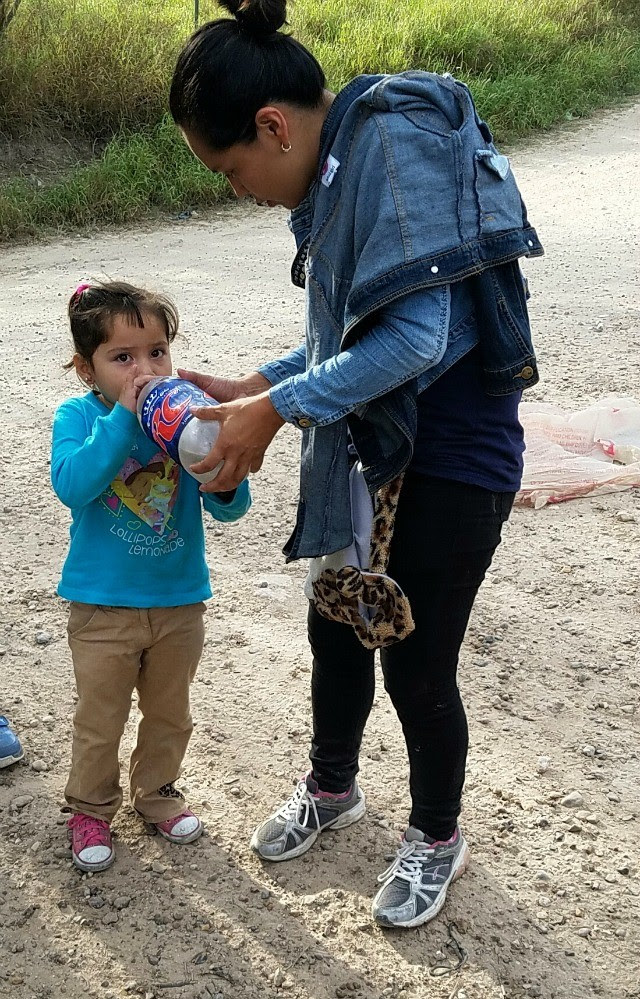 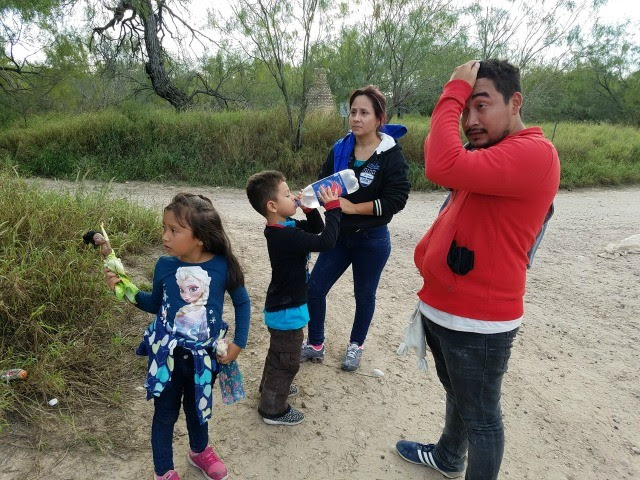 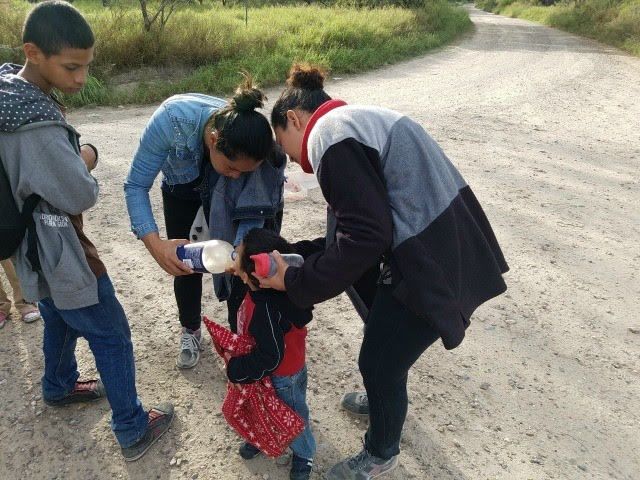 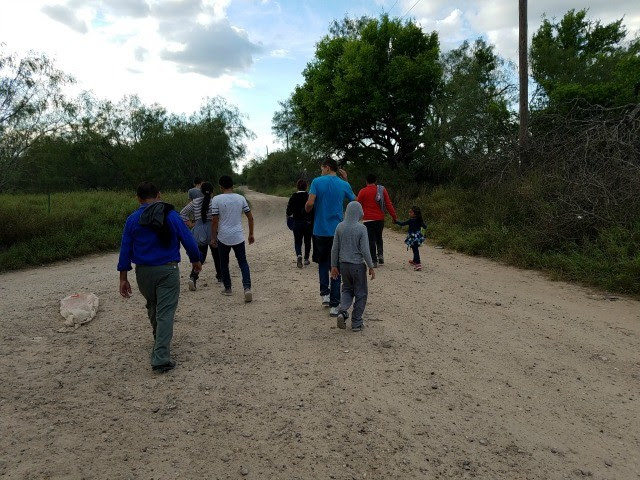 After the second group left, a convoy of U.S. Border patrol vehicles and private prison vans drove to the river. Shortly after, the convoy drove north again carrying an unknown number of illegal immigrants inside.
Breitbart Texas later encountered a group of five illegal immigrants made up of two women and three children. One of the women, who would not give her name, said they had left their home countries fearing the out-of-control violence there.
After that group left, more kept arriving and walking past as they sought Border Patrol agents to process and release them so they could reach their intended destinations. Breitbart Texas encountered various other groups who refused to be on camera and ran away when approached. 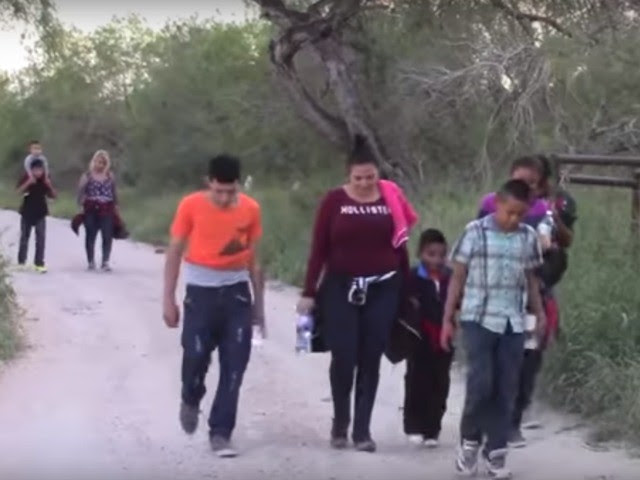 Ildefonso Ortiz is an award winning journalist with Breitbart Texas. He co-founded the Cartel Chronicles project and you can follow him on Twitter and on Facebook.

Posted by The Mexican Invasion & Occupation at 2:46 PM No comments:

Housing crisis and neglect at root of fatal Oakland fire, one of the deadliest in US history

Housing crisis and neglect at root of fatal Oakland fire, one of the deadliest in US history

As the death toll mounts, the horrific fire that broke out at a dance party in East Oakland, California Friday night is now one of the worst such disasters in the recent history of the United States.
The City of Oakland announced early Monday that the number of bodies recovered from the 86-year-old Fruitvale warehouse called the Ghost Ship had risen to 36. The warehouse was being rented out to artists, and the studios were also used as informal housing by about 20 people.
According to survivors and neighbors, the fire spread quickly through ad hoc wooden rooms, cutting off any escape from the dilapidated building that lacked basic fire safety measures. Many were almost immediately trapped on the second floor, where a concert was being held, without any means of escape.
Recovery efforts were delayed Monday when one of the building’s walls threatened to collapse on firefighters. About 75 percent of the structure has been searched, but the Alameda County Sheriff told the Associated Press that he did not expect to find any more bodies.
Thirty-three of the victims have so far been identified. Many were in their 20s and 30s, but the youngest so far was 17. Three foreign nationals were identified, from Finland, South Korea and Guatemala.
According to one tally by “NBC News,”  the Ghost Ship fire is the seventh-deadliest building fire in the past 50 years, a list that includes the attack on the World Trade Center on September 11, 2001 and the Oklahoma City bombing in 1995. It is the deadliest building fire in the US since a night club in Rhode Island burned down in 2003, killing 100 people.
While the precise causes remain to be

determined, indications are that the tragedy

was facilitated by city officials who ignored

unsafe conditions, a landlord who neglected

conditions.
There was no shortage of dangerous flash points in the structure. Shelley Mack, a former tenant who lived in the warehouse for five months, told reporters that the building had no sprinklers or fire alarms and that it regularly went without utilities. Tenants used gas generators or propane stoves to heat their water, and stayed warm in the winter with space heaters. Wires crisscrossed the uninspected wooden partitions that turned the first floor into a maze of studios.
A neighbor, Danielle Boudreaux, described to the Washington Post the precarious makeshift stairs to the second floor where shows were held to help pay rent: “It only took two people on it at a time. .. when you stepped on it, it wobbled, and there were ropes holding it up. If you had three people on that it was falling down.” Once the fire started, she said, “there was no way you were getting out of that building.”
Alameda County District Attorney Nancy O’Malley spoke to reporters Monday afternoon, announcing that the fire was a “potential crime scene” and that her office would investigate whether there was any criminal liability. She said that it was too early to specify who might be implicated, but that charges could range from involuntary manslaughter to murder. Any serious investigation, however, would immediately turn to the city itself.
The unsafe conditions, as well as the warehouse’s role as an unlicensed apartment and music venue, was an open secret to the landlord and city officials. The Tumblr page for the Ghost Ship contains numerous advertisements for musical performances. Over the past two years, the city has received numerous complaints, including three this year, regarding construction without a permit and unsafe conditions.
Twice in 2014 and twice in 2016, building

inspectors were sent to the warehouse in

response to complaints. However, no action

was taken to improve the safety of the

Party where they “canvassed the area and

building.”
In 2007, Alameda County placed a lien on the property, owned by Chor Ng since 1988, for “substandard, hazardous or injurious conditions.” According to public records, Ng has four other properties that have been cited for blight in Oakland.
The conditions found in the Ghost Ship warehouse are far from unique and are well known by the city. Noel Gallo, a city councilor from the Fruitvale district, told CBS, “The reality is, there are many facilities being occupied without permits.” He estimated that there are about 200 warehouses “that have no papers, no permit, no fire code, nothing.”
The negligence of landlords and city officials is complemented by the broader housing crisis that drives poor people to seek out informal housing for cheap rent.
“What this tragedy really brings home is displacement and other impacts of gentrification: the high cost of housing and the lack of affordable housing,” Anyka Barber, co-founder of the Oakland Creative Neighborhoods Coalition, told the Wall Street Journal.
Rents have skyrocketed across the Bay Area in

recent years. Oakland, which was once a haven for

fourth most expensive city for renting in the United

States.
The median cost of an available rental in Oakland in September 2016 was $3,000 a month, according to Zillow. This is up 71 percent from January 2013, when it was just $1,757. Median income for renters in Oakland remains just $3,000 a month, making most apartments wildly unaffordable to perspective tenants.
The Bay Area is riven with social inequality.

While workers in San Francisco and Oakland

apartments are under construction in the

Rockridge and SoMa districts. Across the Bay

from the Fruitvale district where the

warehouse burned down is the home of Larry

Ellison, who has a personal net worth

of $51.6 billion.
The current spike in property prices is part of

a broader economic bubble driven by

financial speculation after the 2008 crash. In

percent or more of their income on housing.

percent of renters spending more than 50

percent of their income on housing.
A UBS report in 2015 drew a direct connection between the amount of cheap credit central banks, led by the US Federal Reserve and the Obama administration, were pouring into the financial market and increasing. The authors wrote, “Loose monetary policy has prevented a normalization of housing markets and encouraged local bubble risks to grow.”
The Oakland Ghost Ship fire is a horrific tragedy, but one with definite roots in the reality of American capitalism.
Posted by The Mexican Invasion & Occupation at 2:15 PM No comments: