MEXICO CITY, Mexico — The raging cartel violence spreading throughout the country has marked 2017 as the bloodiest year since 1997 when the government began documenting such murders. The official figures, however, pale in comparison to reality since they do not account for the number of victims “disappeared” by cartel gunmen–including those who were incinerated or buried in clandestine graves.

The new statistics released by Mexico’s National Public Security System (SESNSP)revealed that for the year, the country suffered a total of 26,573 murders; 1,275 kidnappings; and 5,357 extortion cases. The 2017 murder total surpassed all previously recorded years since initial recording in 1997.
The record-breaking figures come at the end of Mexican President Enrique Peña Nieto’s Administration, who won his 2012 bid on the promise of reducing cartel violence. Soon after his election, Peña Nieto pushed for the creation of a new federal police force and modernizing Mexico’s judicial system. The administration was plagued by public corruption scandals and the discovery of Peña Nieto’s taking cartel funds during the election. The press freedom group Article 19 recently released a report about the billions in public funding that EPN used to control news outlets.
The escalating violence in 2017 will likely weigh heavily against EPN’s political allies in the Institutional Revolutionary Party (PRI) as tourist hotspots and areas once untouched by cartel violence are now seeing gory executions and gun battles.
While alarming, the statistics compiled by the SESNSP only take into account the crimes recorded by attorney general offices in Mexico’s 32 states. The figures do not include the victims found in cartel killing fields and mass incineration operations like found in Coahuila. As Breitbart Texas reported, activists discovered thousands of human bone fragments in one of the killing fields.
One of the issues in recording kidnapping and extortion cases is the general distrust among residents for state and local law enforcement. In Coahuila, Tamaulipas, Veracruz, Nuevo Leon, Chihuahua, Michoacan, and Guerrero, state officials have a history of being infiltrated by the same cartels they are expected to fight. Despite modest improvements against corruption, the public’s trust is still lacking.
Ildefonso Ortiz is an award-winning journalist with Breitbart Texas. He co-founded the Cartel Chronicles project with Brandon Darby and Stephen K. Bannon.  You can follow him on Twitter and on Facebook. He can be contacted at Iortiz@breitbart.com.
Brandon Darby is managing director and editor-in-chief of Breitbart Texas. He co-founded the Cartel Chronicles project with Ildefonso Ortiz and Stephen K. Bannon. Follow him on Twitter and Facebook. He can be contacted at bdarby@breitbart.com.

As President Trump continues to push for his pro-American immigration agenda, many Americans were victimized by illegal immigration this year.

Here are 11 headlines wherein 35 illegal aliens are accused of committing some of the most heinous crimes against Americans in 2017.
1.Illegal Alien Accused of Murdering Muslim Teen

Darwin Martinez Torres, a 22-year-old from El Salvador, is responsible for the beating death of 17-year-old Nabra Hassanen, according to police.
Hassanen and a group of fellow Muslim teenagers were eating at a nearby McDonald’s when they left and started walking back to the All Dulles Area Muslim Society (ADAMS) Center when Torres, according to police, started following the teenagers.
Soon after the teens noticed Torres, the illegal alien allegedly jumped a curb with his car and got out of his vehicle and started chasing the teens while wielding a baseball bat. Torres was able to grab Hassanen and began beating her to death with the bat, police said.

An illegal alien who was drunk driving has pleaded guilty to killing a Kansas deputy sheriff after causing a deadly car crash last year. Sanctuary city policies in two jurisdictions allowed the previously convicted drunk driver to remain in the U.S., leading to the death of the deputy.

A six-year-old boy in San Diego was severely injured when a drunk-driving illegal alien allegedly slammed into the family’s car on their way home from the Disneyland theme park, the San Diego Union-Tribune reported.

German Cruz Capetillo, a 30-year-old illegal alien, was arrested in Edgecombe County, North Carolina, for allegedly having sexual relations with the 13-year-old, who reportedly ran away from home.

Salvador Diaz-Garcia, 23, is facing second-degree assault and rape charges for an alleged brutal attack on a 19-year-old woman in Burien, Washington, Breitbart Texas reported.
According to court documents, the woman was on a treadmill at her local gym when Garcia allegedly stood behind her and asked her questions. The woman said she asked Garcia to move. Garcia allegedly attacked the woman, breaking her jaw, nose, and ripping half of her ear off.

6. Illegal Immigrant Accused of Running over Man in Drunk Hit-and-Run

An illegal immigrant is now facing felony charges after allegedly running over a Raleigh, North Carolina man in a hit-and-run car accident while intoxicated.
Carlos Edilberto Flores-Benitez, 27, allegedly ran over a man while he was drinking and driving, police and eyewitnesses say, according to WNCN. Police reports claim the illegal immigrant hit the man at an intersection and then immediately sped off from the scene.

Marco Vinicio Perez, also known as Marco Perez-Geronimo, allegedly murdered his girlfriend four years after he was ordered deported in 2012. Police arrested the illegal alien on first-degree murder charges after he was accused of beating her to death last January because “demons in his head told him” to kill her.
Had he been deported to his native Guatemala on schedule, Idelcira Perez might still be alive. Almost nothing else is known about Perez, the Tallahassee Democrat explains, but he never appealed his deportation order.

Luis Baez is alleged to have picked up a woman in Boston while driving under the fake name of Pedro Valentin in September, Middlesex District Attorney prosecutors told Boston25 News. Instead of dropping her at her requested destination, he drove her to another location where he allegedly sexually assaulted the young woman. He then dropped her off at Boston College and she reported the incident to campus police. Boston College would not confirm or deny if the woman is a student at the college.

Marco Freiire, a 42-year-old illegal alien from Ecuador, was arrested by ICE after being released in July, despite a pending immigration hold. Freiire was arrested on assault, criminal possession of a weapon, harassment, and menacing charges at the time. Months later, ICE located and arrested the criminal illegal alien at his residence in Brooklyn.

Gus Zamudio, 18, returned to Mexico City nearly a month before he was expected to graduate from art school, Breitbart Texas reported in May.
Zamudio allegedly embezzled approximately $3,000 from Harris Teeter, the grocery store he was working for in February, according to police. Zamudio’s attorney pleaded down the felony charges, but the illegal immigrant remained in law enforcement custody.

Immigration and Customs Enforcement (ICE) Removal Operations (ERO) officers arrested 25 illegal immigrants in Long Island, New York – 24 were convicted of driving under the influence of drugs or alcohol. One of those is an MS-13 member. 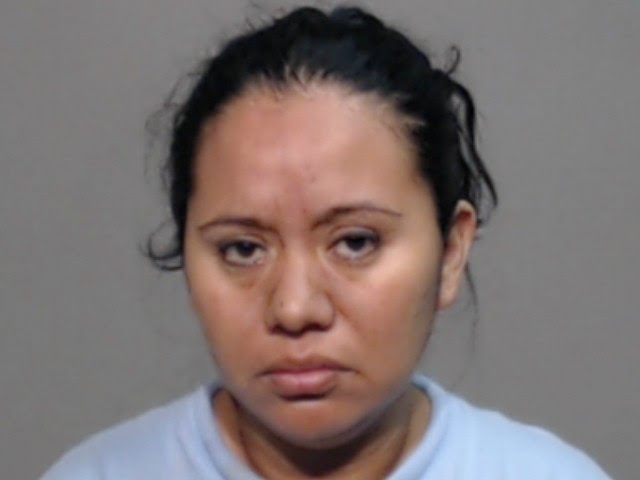 When deputies arrived, they encountered Cardenas. Authorities discovered the body of the one-month-old girl. A local justice of the peace pronounced the newborn dead and ordered an autopsy. Crime scene investigators and detectives searched the home, reportedly finding evidence of the murder.
On Christmas Eve, Cardenas went before Justice of the Peace Robert Contreras who formally charged her with one count of capital murder and set her bond at  $1 million before ordering her back to a cell. Breitbart Texas was able to confirm with local and federal authorities that Cardenas is not a U.S. citizen and is in the country illegally.
Ildefonso Ortiz is an award-winning journalist with Breitbart Texas. He co-founded the Cartel Chronicles project with Brandon Darby and Stephen K. Bannon.  You can follow him on Twitter and on Facebook. He can be contacted at Iortiz@breitbart.com.
Brandon Darby is managing director and editor-in-chief of Breitbart Texas. He co-founded the Cartel Chronicles project with Ildefonso Ortiz and Stephen K. Bannon. Follow him on Twitter and Facebook. He can be contacted at bdarby@breitbart.com.

THIS IS REALITY OF AMERICA UNDER MEXICAN OCCUPATION.... WE CAN'T END THE HOUSING, HOMELESSNESS, JOBS OR DRUG CRISIS UNTIL WE PUSH MEXICO OUT OF OUR BORDERS AND PRO-AMNESTY POLS OUT OF OFFICE!

The people of Poughkeepsie: Searing portraits of life in New York where one in five are below the poverty line and drugs and sex work run rampant


View comments
Striking new images show how some residents living in Poughkeepsie, north of New York City are living below the poverty line as drugs and sex work run rampant in the small city.
Photographer Caleb Stein captured the images as part of an ongoing project titled 'Down by the Hudson'. The captivating photos showcase how 19 per cent of the 30,267 residents struggle to make ends meet.
As a result, many of those who are impoverished live on the streets or turn to prostitution to earn cash, he claims.
'Recent years have brought a great deal of economic hardship to this lively, character-filled place,' Stein, a british-born photographer, told Petapixel. 'Some people attribute this to the downsizing of IBM’s local headquarters. Others say that fault lies with the Poughkeepsie Galleria Mall, or the additions to the highway system, both of which have de-emphasized the role of Main Street.'
The images are part of his interactions with residents along a three-mile strip of Main Street in the city and is a record of his walks. Stein, who is originally from London, currently lives in the Poughkeepsie area after graduating from Vassar College in 2017. 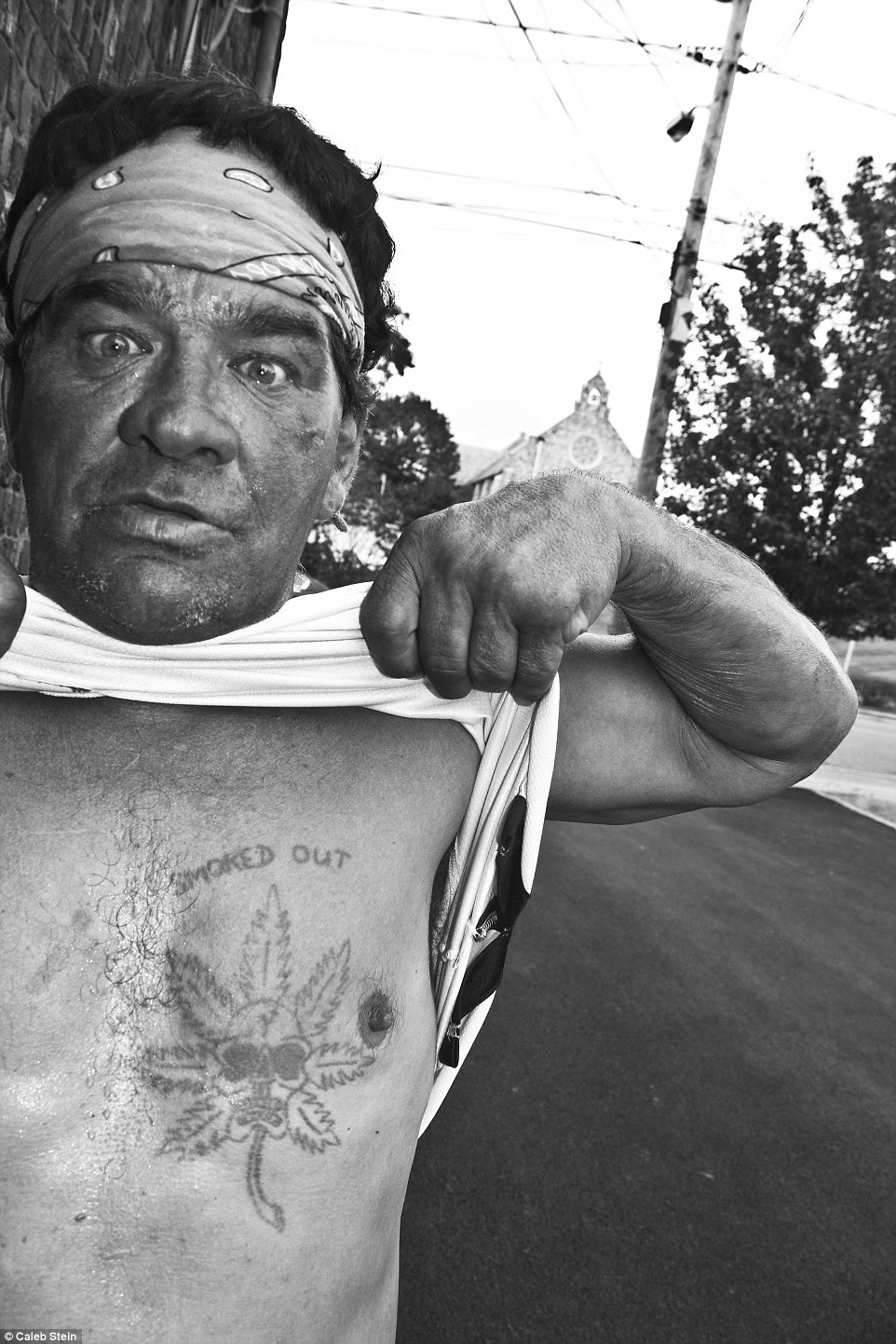 +14
Striking new images show how some residents living just outside of New York City in Poughkeepsie are living below the poverty line as drugs and sex work run rampant in the city. Pictured above is a man named Artie showing off his 'smoked out' chest tattoo 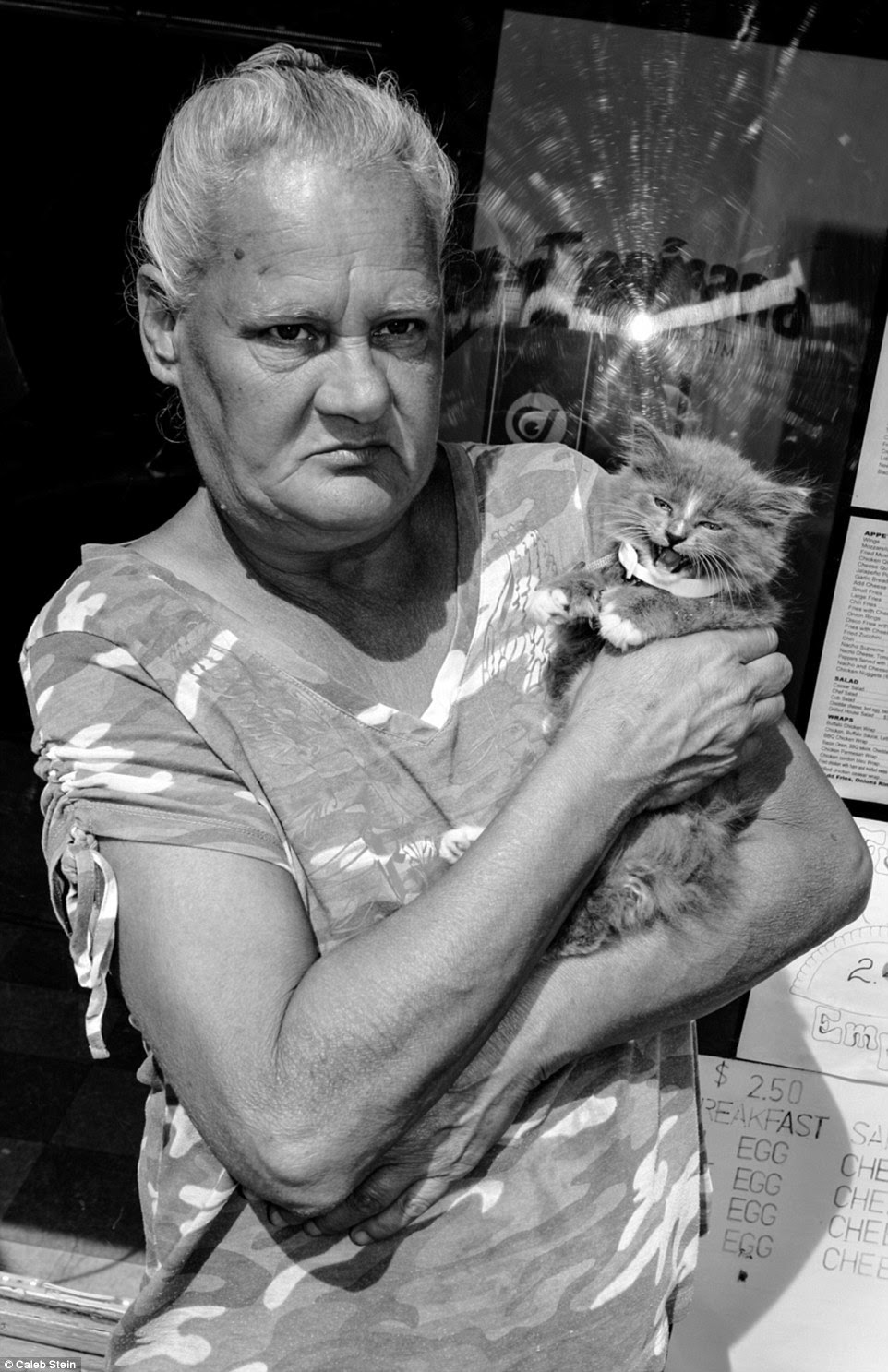 +14
Photographer Caleb Stein captured the images as part of an ongoing project titled 'Down by the Hudson'. Pictured above is a woman named Karen with a cat on Main Street 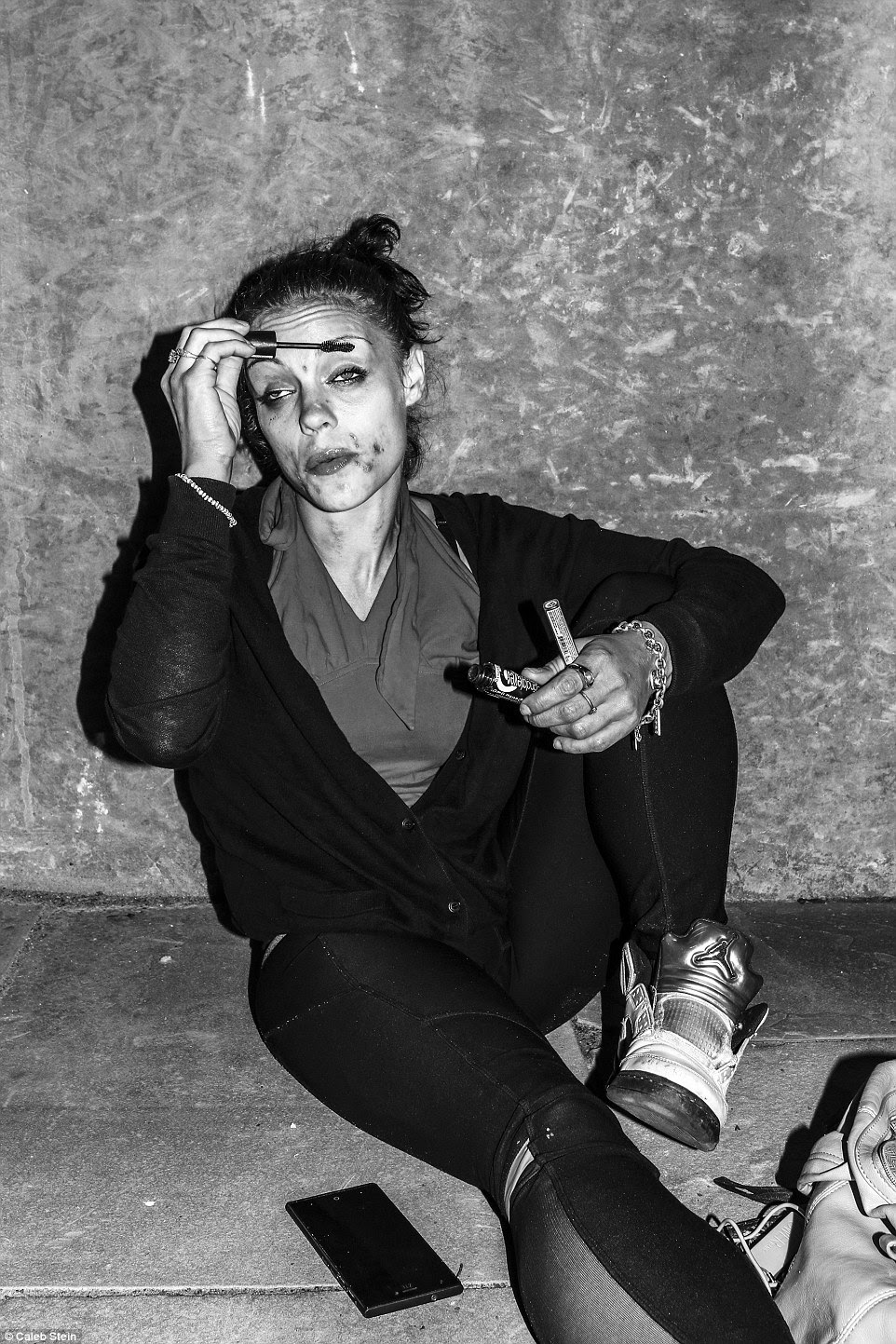 +14
The captivating photos showcase how 19 per cent of the 30,267 residents struggle to make ends meet. As a result, many of those who are impoverished live on the streets or turn to prostitution to earn cash, Stein said. Pictured above is Nikki on Cherry Street in the city 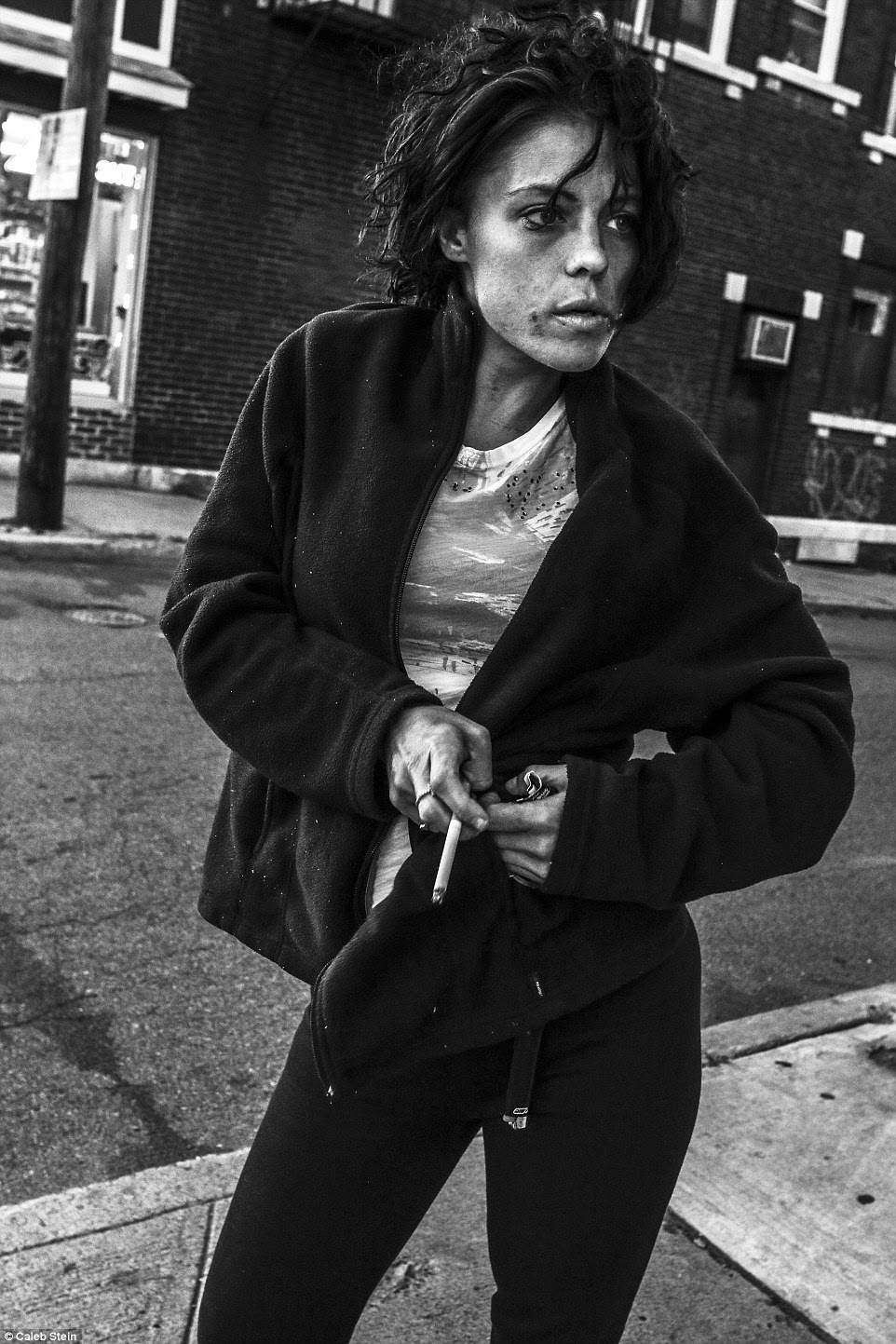 +14
Nikki came from a home where her mother was a drug addict and she hasn't seen her family in years, including her daughter. Prostitution and drug addiction have become a vicious cycle for her, Stein said 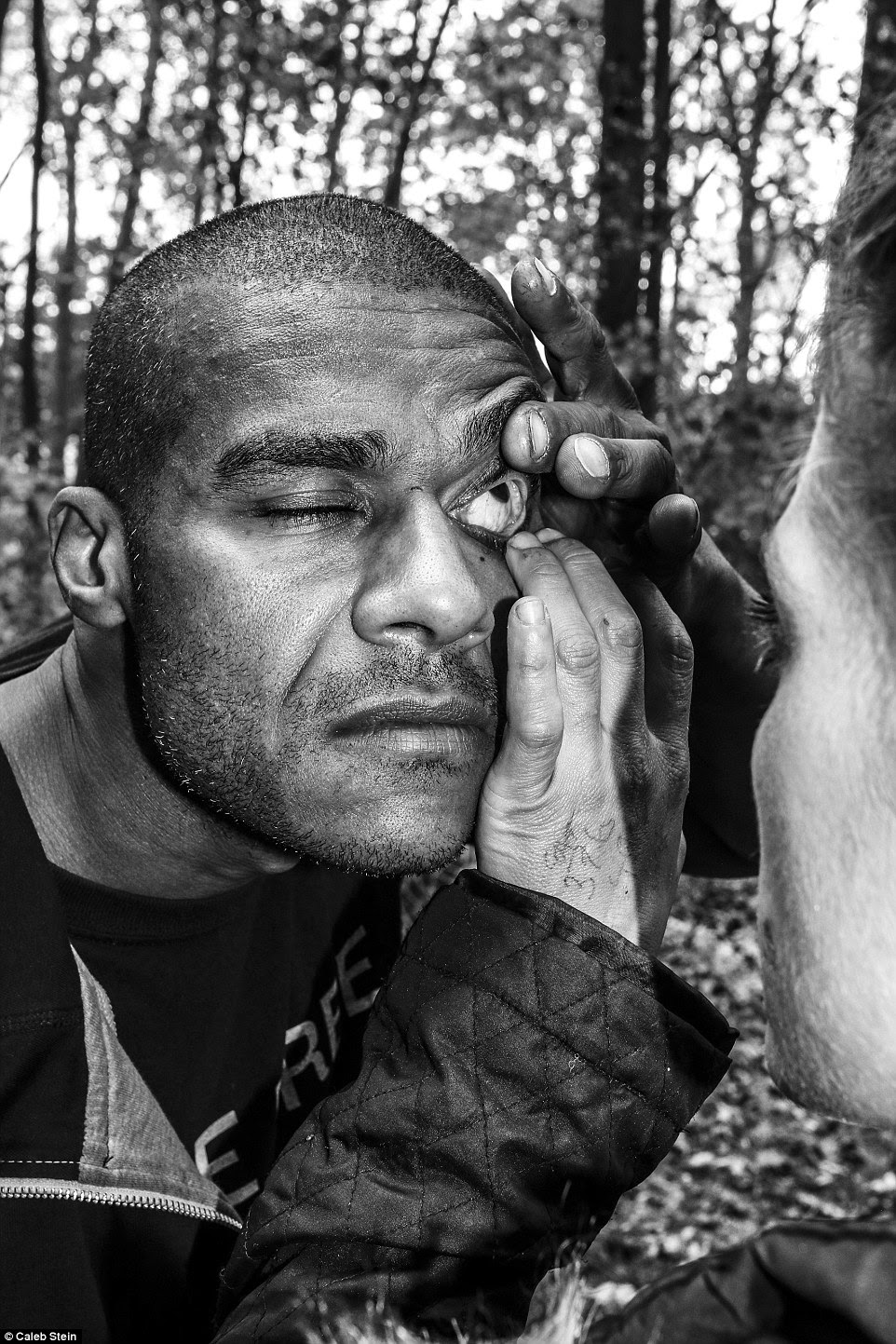 +14
The images in the series are part of his interactions with residents along a three-mile strip of Main Street in the city and is a record of his walks. Pictured above is Nikki looking into Jose's eye 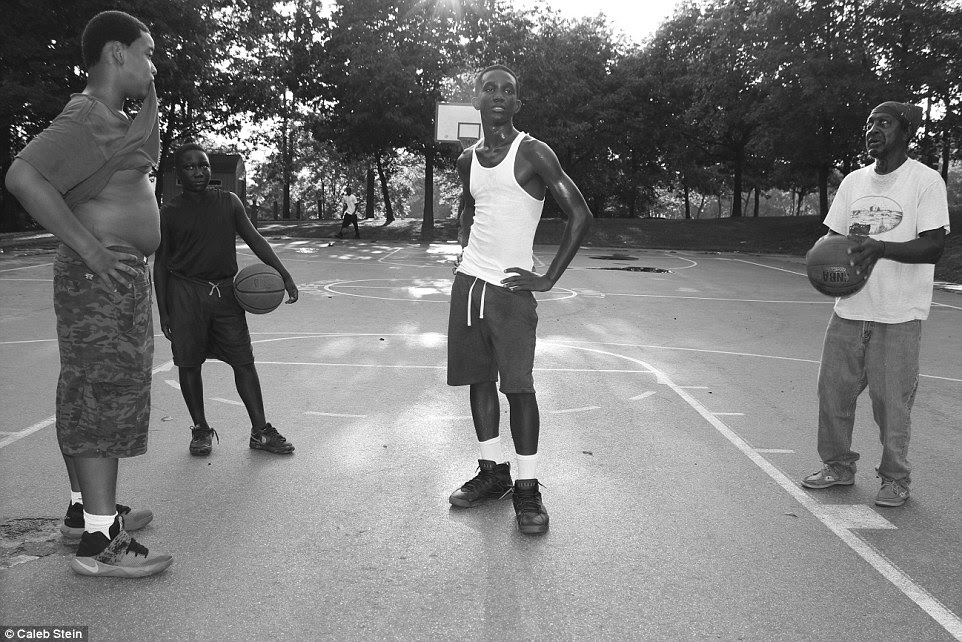 +14
Stein, who is originally from London, currently lives in the Poughkeepsie area after graduating from Vassar College in 2017. Pictured above are a group of residents playing basketball near Market Street 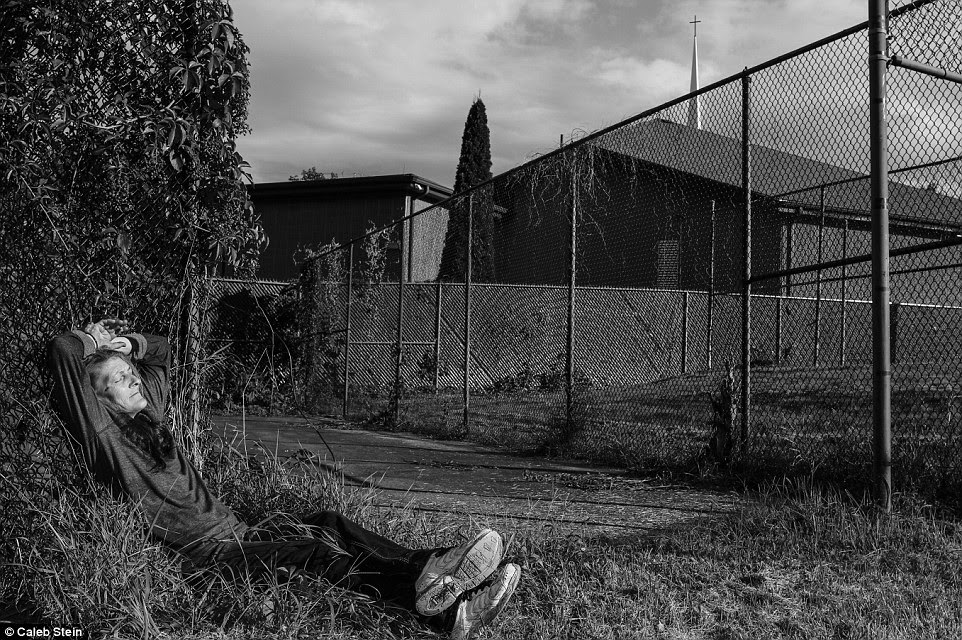 +14
Stein captured this image showing Virginia relaxing in Malcolm X Park in the city. He claims she has been addicted to heroin for decades and that her entire family has died of overdoses 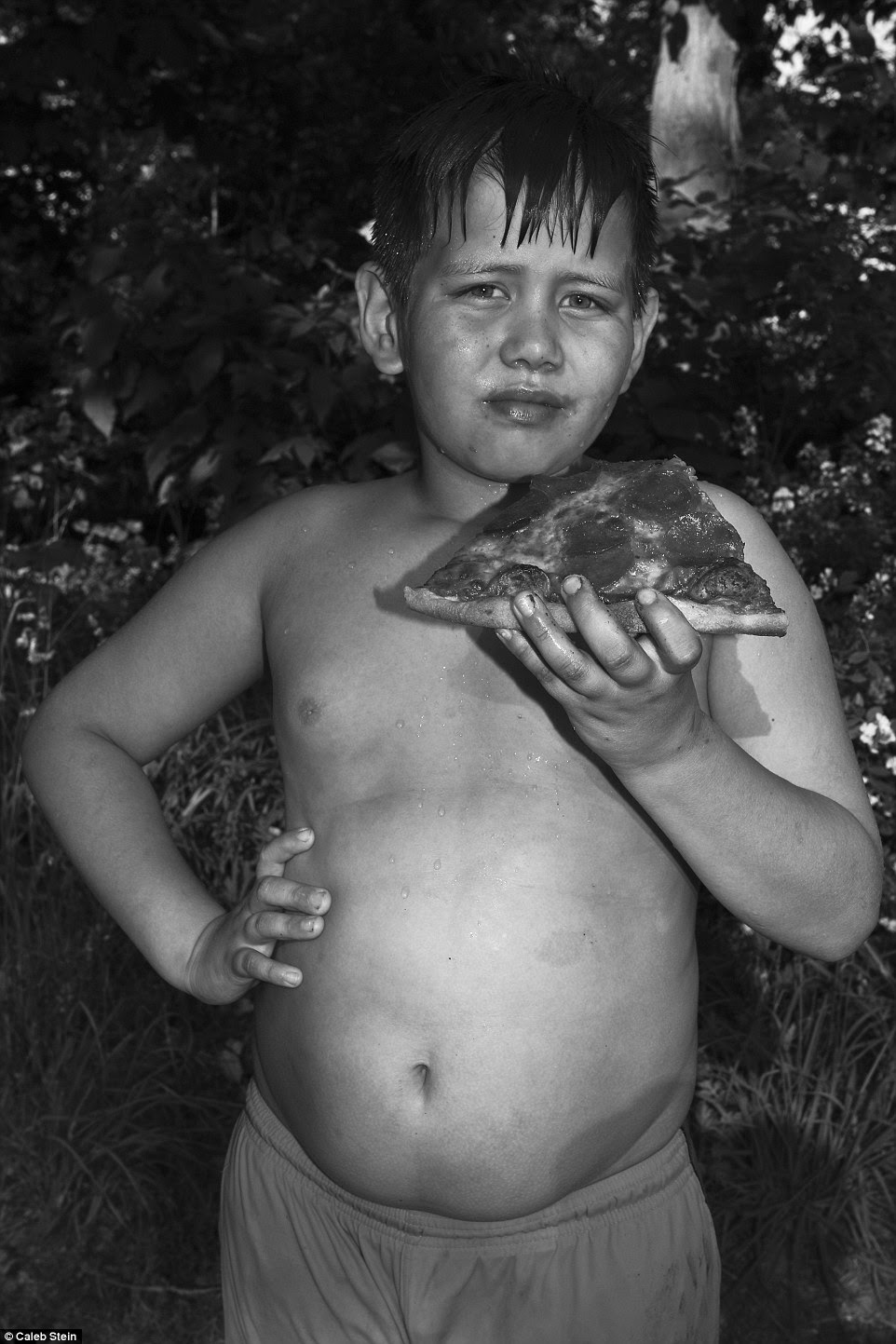 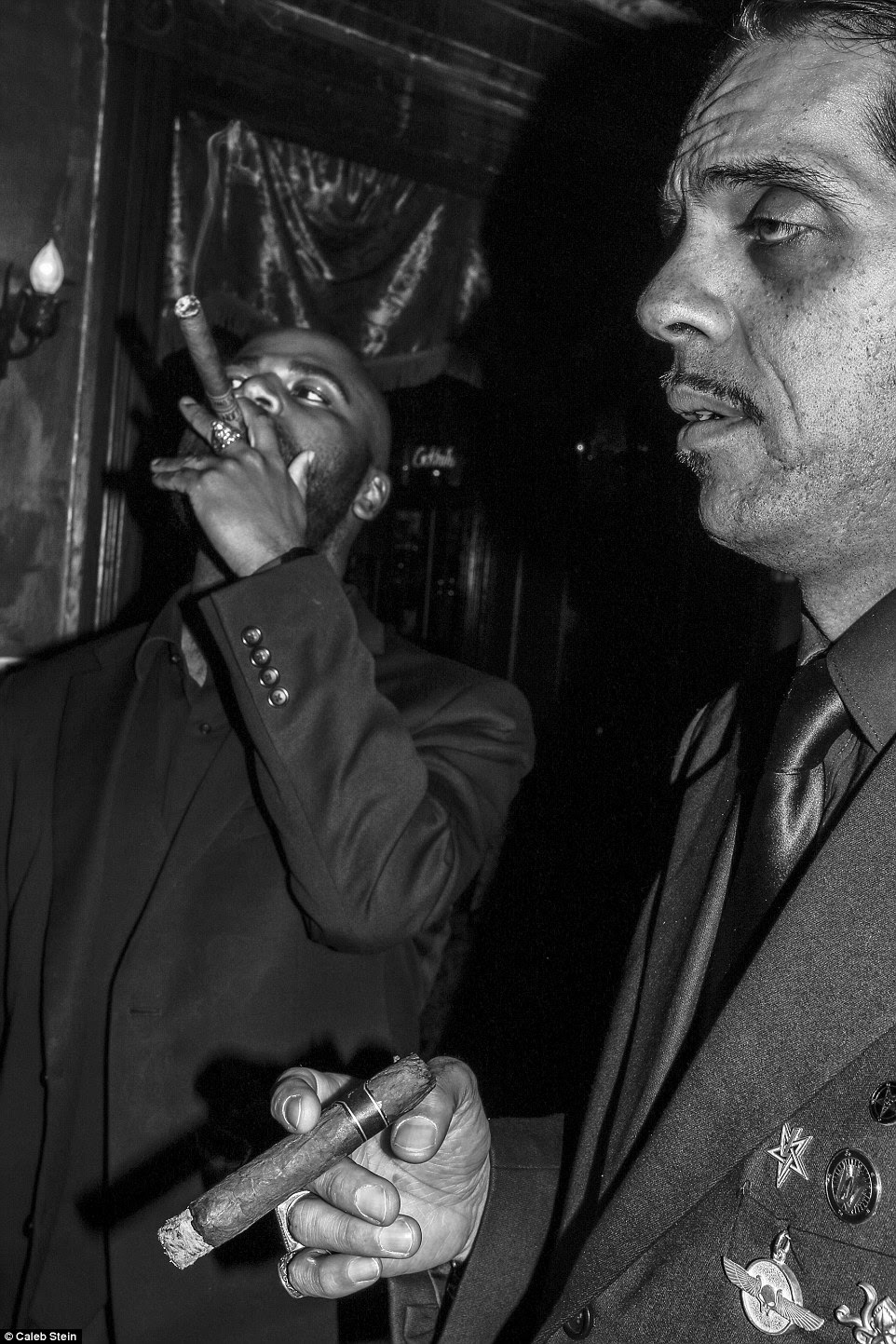 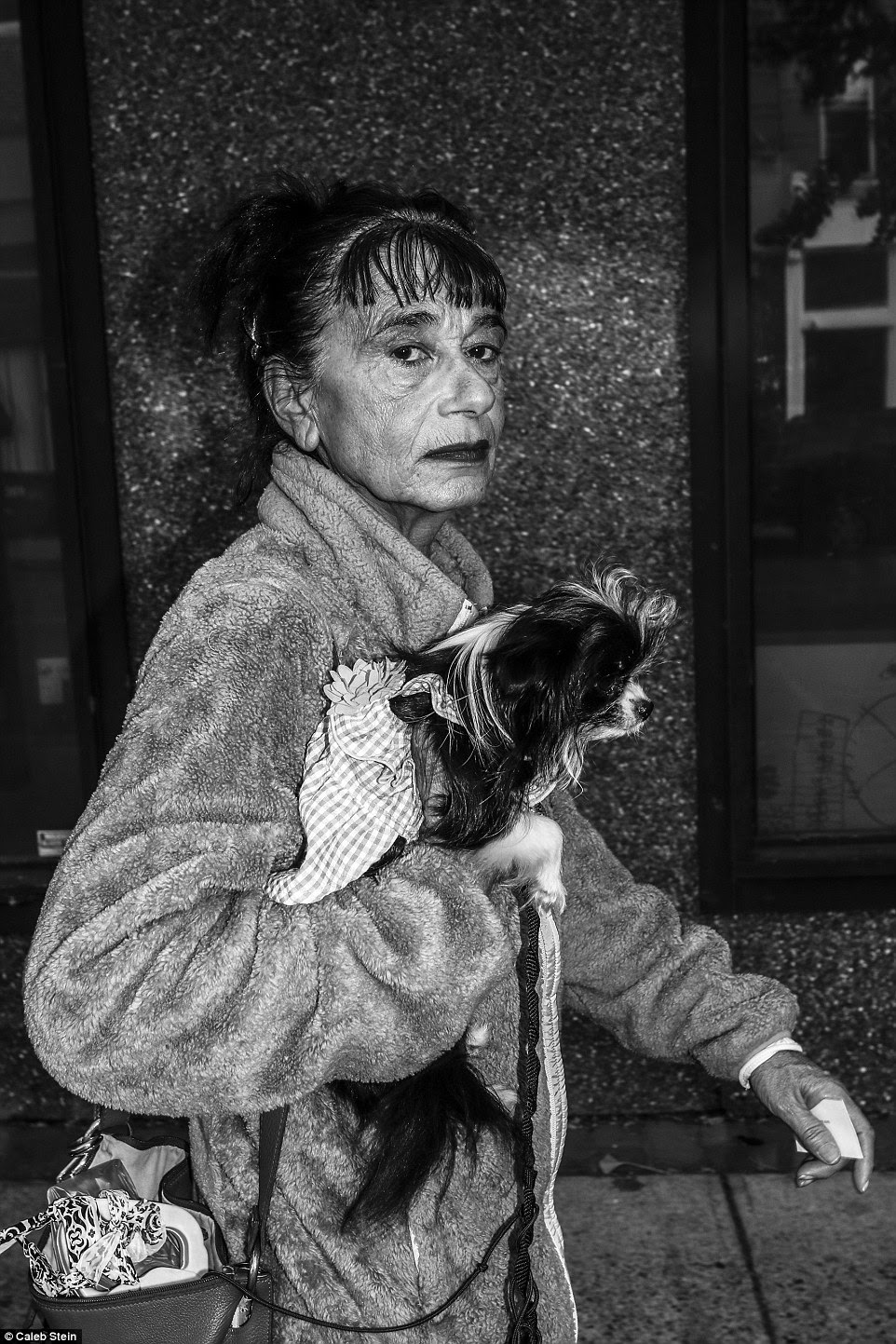 +14
Poughkeepsie resident Rebecca is pictured above walking down Main Street in the city with her dog, Ruby 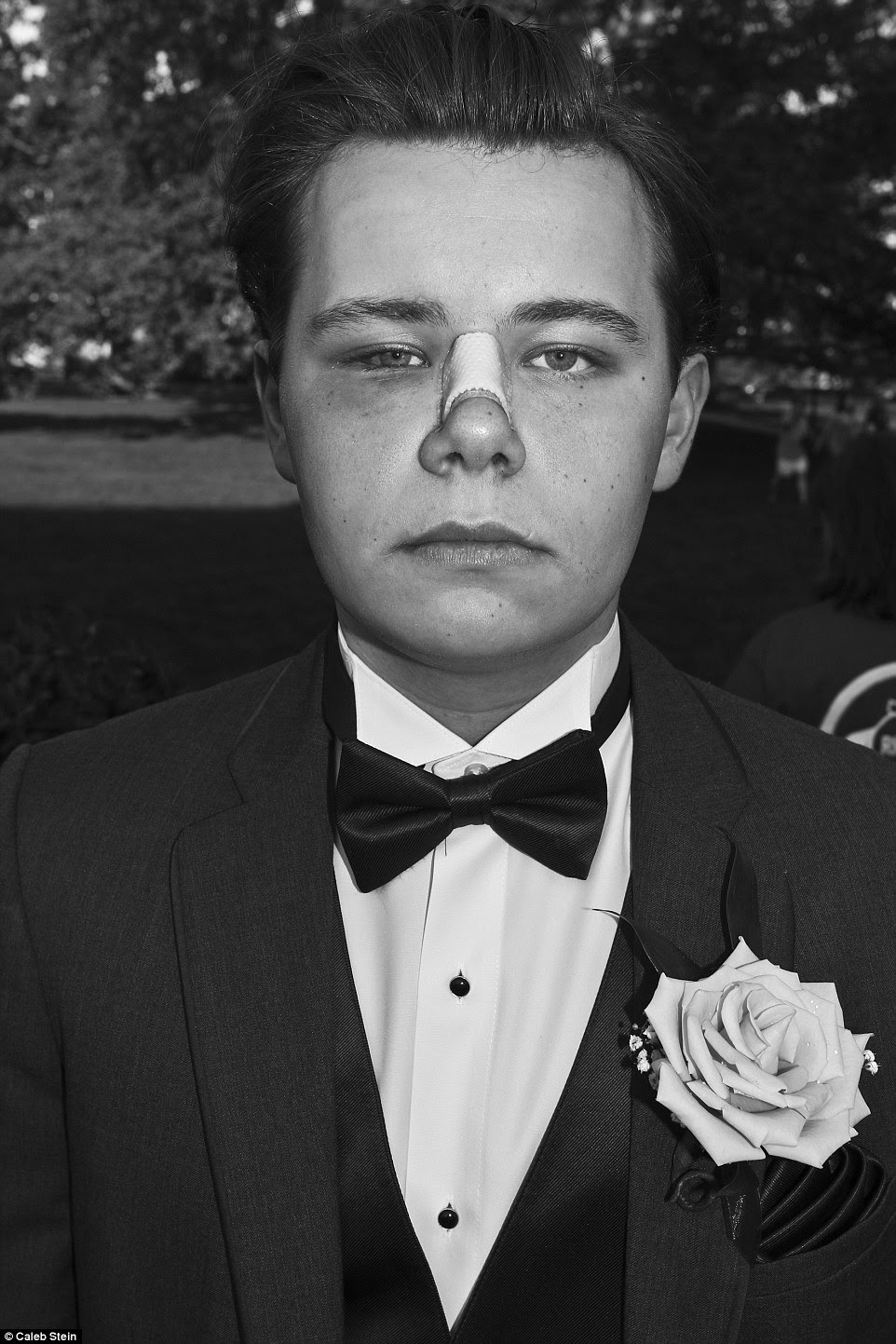 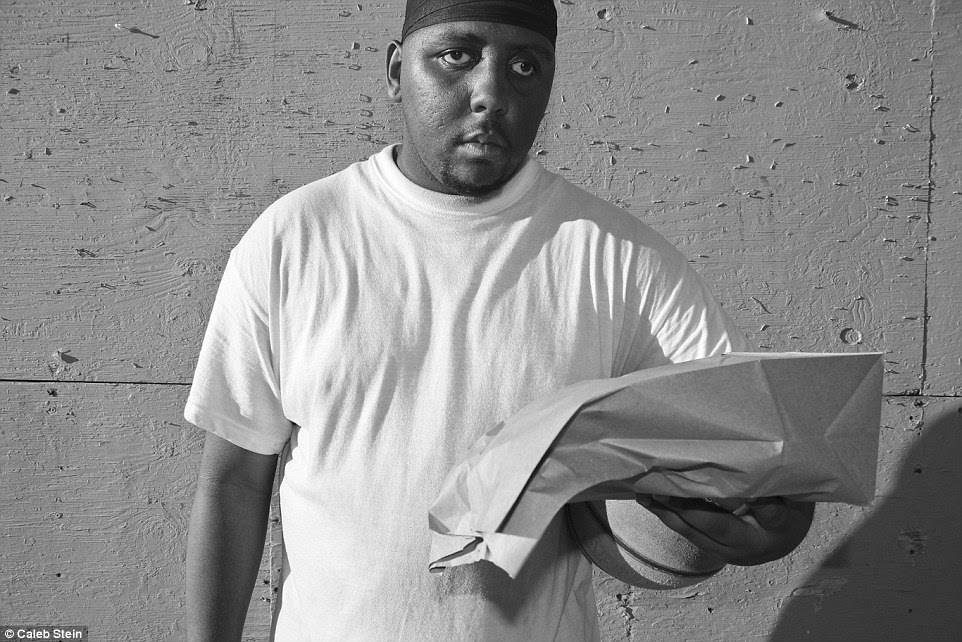 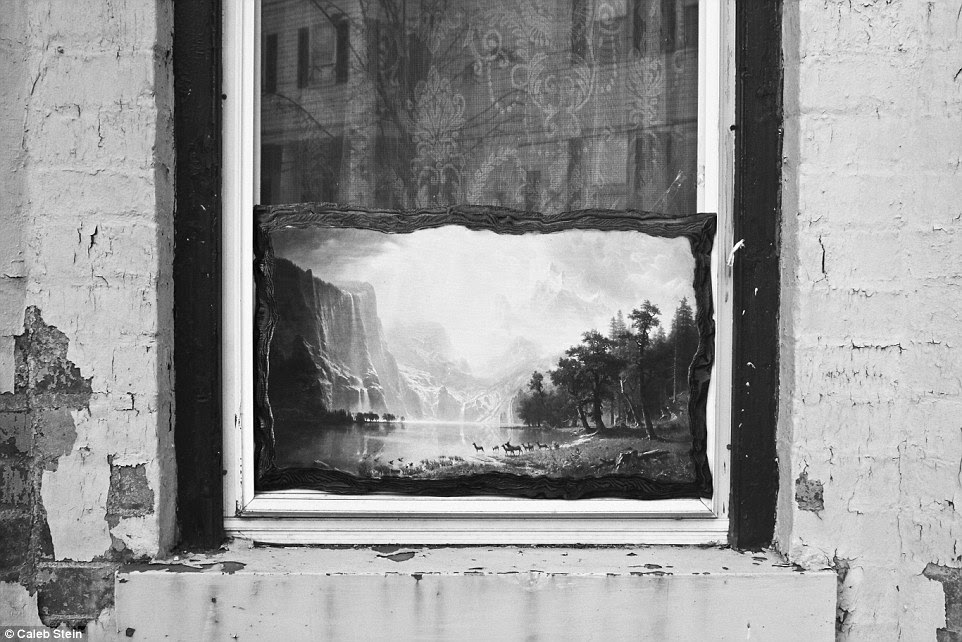 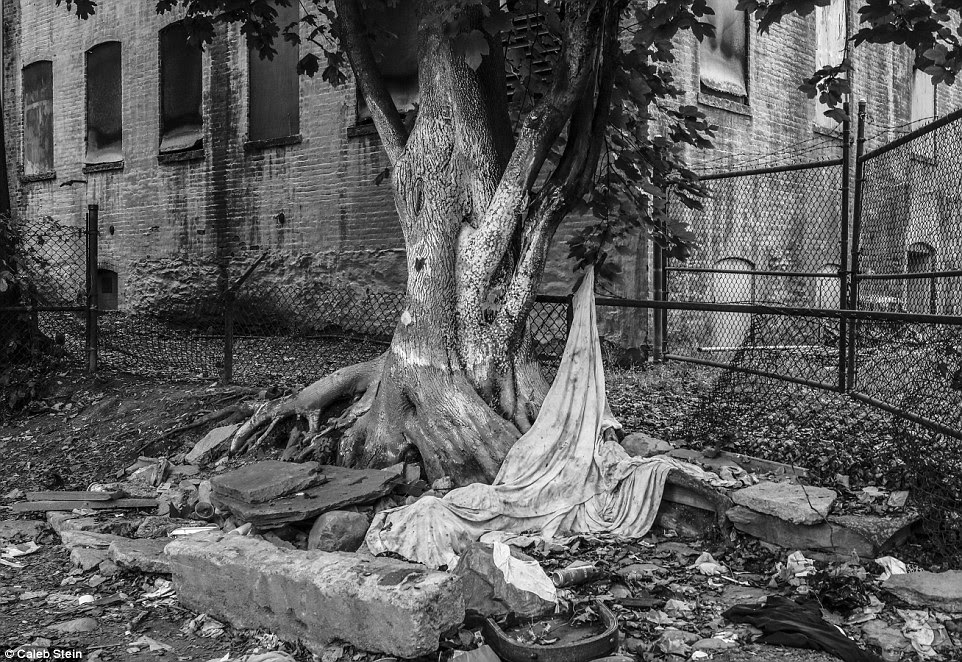 
Read more: http://www.dailymail.co.uk/news/article-5202815/Searing-images-poverty-upstate-New-York.html#ixzz52g4I2BBj
Posted by The Mexican Invasion & Occupation at 1:18 PM No comments: Links to this post