PELOSI'S MURDERING MEXICANS - ILLEGAL IN JAIL FOR MURDER WAS RELEASED DUE TO 'CLERICAL ERROR'.... He went out and voted Democrat for wider open borders! 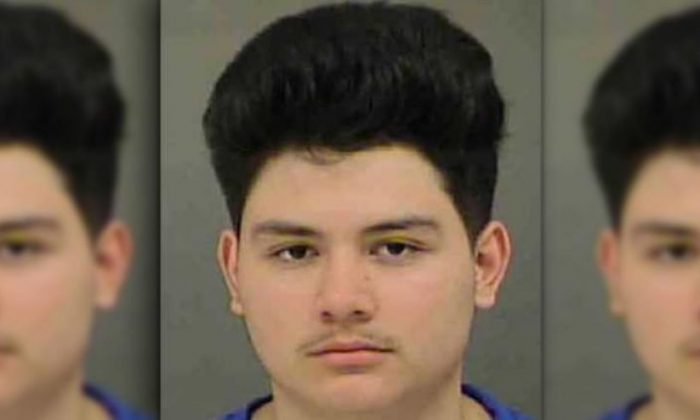 Sergio Coello-Perez, an illegal alien, was released from a North Carolina jail despite being charged with murder. (Mecklenburg County Sheriff's Office)

https://www.theepochtimes.com/illegal-alien-in-jail-on-murder-charge-released-due-to-clerical-error_2752829.html
BY ZACHARY STIEBER
Share
An illegal alien has been released from a North Carolina jail due to a clerical error, according to prosecutors.
Sergio Coello-Perez, a 17-year-old alien from Mexico, was released from the Mecklenburg County Jail on Dec. 27 after being held for seven months.
He was released after submitting a written promise to appear in court and to wear an electronic monitoring bracelet and did not have to post bail.
The Mecklenburg County Sheriff’s Office recently pulled out of an immigration screening program amid a trend of jails declining to work with the federal Immigration and Customs Enforcement (ICE) agency.
Through the program, ICE receives information about illegal alien defendants and is ready to deport them when they’re released from prison.
Just a day after the release, Coelle-Perez was booked back into the jail. Prosecutors obtained a court order for his arrest “to correct a clerical error,” reported WBTV.
The alien, who was charged with murder in May, was out for 31 hours before the error was corrected.
A spokesperson for the Mecklenburg County Sheriff’s Office confirmed that the “ICE hold was lifted” but, she claimed, “that’s not why Coello-Perez was released.”
Bail bondsman Chad Lewis said that in his 15-year career, he’s never seen anything like an accused murderer being released.
“I think it’s ridiculous that somebody took somebody’s life allegedly and then walks out of jail on their own recognizance,” Lewis told WCNC. “I don’t think it’s fair to the victim, I don’t think it’s fair to the victim’s family, I don’t think it’s fair to the justice system.”
Jason Cunningham, another bail bondsman, said he thinks the release was due to the sheriff’s office ending its partnership with ICE.


“When the new sheriff signed the new policy to release the [immigrant], his immigration hold got released,” Cunningham said. “I think it’s insane someone charged with first-degree murder walks out of jail with a written promise.”
The allegedly mistaken release comes as a sheriff in California blamed the murder of a police officer by an illegal alien on the state’s sanctuary law.
“We can’t ignore the fact that this could have been preventable,” Stanislaus County Sheriff Adam Christianson told reporters, asking why the state was “providing sanctuary for criminals (and) gang members.”
“It’s a conversation we need to have,” he said.
In that case, seven other illegal aliens were arrested for allegedly working together to lie to investigators to try to allow the accused murderer time to flee to Mexico.

Police officials said that Coello-Perez and another male went to a house in May and stole a number of items before returning at a later time to try to steal a car.
Nicholas Boger, the homeowner, went outside, and the suspects shot him to death.
Boger’s niece told WSOC that her uncle loved life and was a joy to be around.
“Since I first met him he’s just been a stand-up guy,” Chrissy Boger said.
She said that the death of a loved one was very hard.
“Each day, each hour, each minute is definitely hard,” Boger said. “Just trying to make sure that I am keeping my composure.”
From NTD News
Follow Zachary on Twitter: @zackstieber 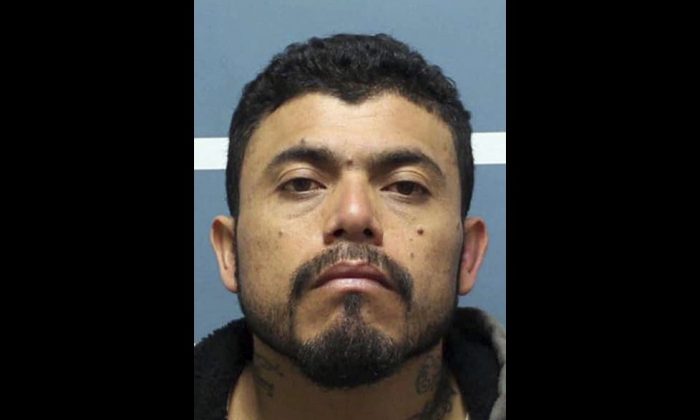 Gustavo Garcia, an illegal alien who had been deported, died in Tulare County, Calif., on Dec. 17, 2018, after a criminal rampage. (Tulare County Sheriff's Office)

BY ZACHARY STIEBER
Share
An illegal alien who re-entered the United States after being deported died following a criminal rampage that included shooting at his ex-girlfriend and injuring four people while recklessly driving a vehicle.
Gustavo Garcia, 36, spent 24 hours conducting a “reign of terror,” police officials said, showing a blatant disregard for human life.
He robbed a store, killed a stranger, shot at his ex-girlfriend, stole a truck, engaged in a gun battle with police, and drove the wrong way down streets and crashed into vehicles, leaving four people injured, one critically, before he was flung from a stolen truck in a collision and died on Dec. 17.
The spree started on Sunday when Garcia shot a farm worker in Exeter while the worker was on a ladder picking fruit.
Three minutes later, he committed an armed robbery, taking thousands in cash from a small business. Several hours later, he shot at a woman who was in her car in the parking lot of a Motel 6 in Tulare.
The spree also included homicide and an assault with a deadly weapon early Monday morning. The victim was identified as Rocky Paul Jones, 51, who police believe did not know Garcia before he was shot dead.
Shortly after, Garcia went to the house of his ex-girlfriend in Visalia and fired several gunshots while threatening her.
Around 5 a.m., police officers stopped Garcia after recognizing his vehicle but he fled into an orchard, held three farm workers at gunpoint, stole their truck, and drove quickly away, triggering a high-speed chase that at one point reached speeds around 100 mph.
Garcia was ejected from the truck and died. 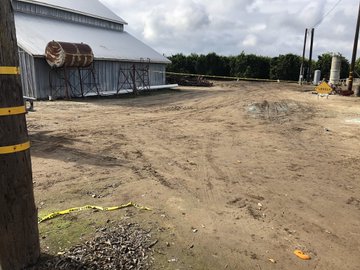 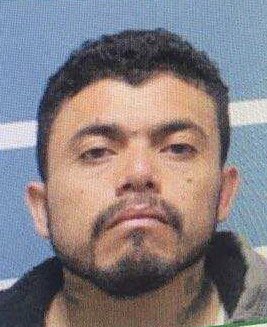 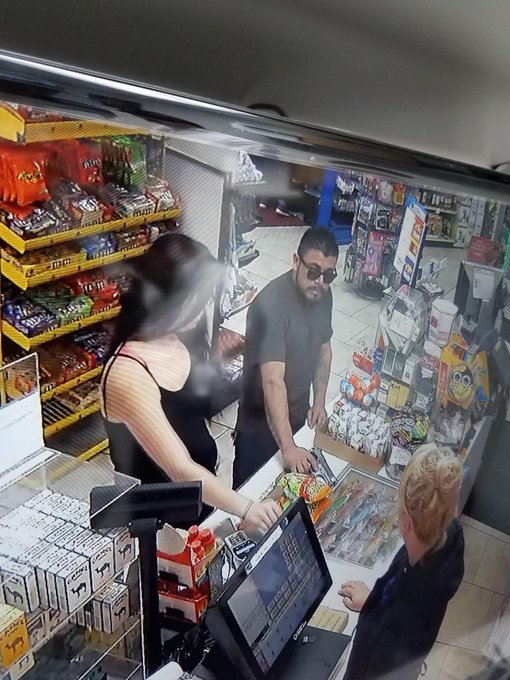 This is the area near Exeter where @TulareSheriff says Gustavo Garcia shot a farmworker in the chest before robbing a gas station on Sunday. Farmworker is expected to survive. @ABC30


“These were not chosen targets, which makes it more dangerous,” Tulare County Sheriff Mike Boudreaux said at a Monday afternoon press conference, reported the Fresno Bee. “This person was targeting anyone that got in the way. He equally was not deterred by the acts of law enforcement. He was a violent person.”
Up to 12 crimes involving Garcia are being investigated.
Garcia has a long criminal history, including multiple assaults with a deadly weapon, and was deported in 2014, officials said, according to the Visalia Times-Delta.
“(Garcia) lost his life in a traffic accident and can’t see the ability of bringing him to justice, but we can say his reign of terror in Tulare County is stopped,” said Boudreaux.

Family members of Jones, who was believed to be murdered by Garcia, reacted to the death.
“He loved everybody with his own being, and he always made sure everyone knew that,” Jones niece Kenedi Baxter-Jones told KFSN. She added on a GoFundMe page that “Rocky Jones was a very giving, loving, and unselfish man. He was a dad, son, grandpa, uncle, cousin, and friend to many.”
She said the family was upset that Garcia was deported but came back into the country, which is a felony crime.
“The fact that he came back and my uncle is dead now is what angers us the most,” said Kenedi.
She said the effort by law enforcement was not good enough.
“The day before he robs a store, he shoots a guy in Exeter,” said Kenedi. “It shouldn’t have taken my uncle to be murdered at 2:30 a.m. for them to do anything.”
From NTD News
Follow Zachary on Twitter: @zackstieber

When the Going Gets Tough ...

The very fabric of America is under attack—our freedoms, our democracy, and our constitutional rights have become contested terrain. The Epoch Times, a media committed to truthful, responsible journalism, is a rare bastion of hope and stability in these testing times.
While other media may twist the facts to serve political agendas, we deliver stories while upholding our responsibility to society.
We’ve reported truthfully on the current U.S. administration from the start. We reported on the real possibility of a Trump victory in 2016. We’ve led reporting on the Chinese communist threat since 2000; we have been exposing communist thought in our government, schools, universities, popular culture, and media; and we, like no other media, are rigorously investigating and exposing the unscrupulous agents working to subvert our society.
Stand with us in advancing a truly independent and truthful media—the way a free press was intended to be, as a cornerstone of the Republic. Your contribution allows us to continue piercing through the surface narratives of mainstream media, and provide you with a full picture.
Epoch Times editor-in-chief Jasper Fakkert urges you to support our independent media. We are asking you to help us raise $1 million going into the new year to support our unique and truthful content.
Every contribution counts, big or small. We sincerely thank you for your continued support and encouragement in these critical times.

He blamed immigrants and lawmakers, not the White House, for the tense situation at the border, where thousands of Central Americans are stranded in Mexico — and two Guatemalan children have died in Border Patrol custody in Texas and New Mexico this month.
“One of the reasons why it’s so difficult to keep people from coming — obviously it’d be preferable for them to stay in their own homeland but it’s difficult to do sometimes, where they live — is a crazy, oftentimes conflicting series of loopholes in the law in the United States that makes it extremely hard to turn people around and send them home,” Kelly said.
“If we don’t fix the laws, then they will keep coming,” he continued. “They have known, and they do know, that if they can get here, they can, generally speaking, stay.”

The L.A. Times report — like many other outlets — buried Kelly’s condemnation of the House and Senate leaders’ passive support for the many catch-and-release laws and rules which allow the cartels to profitably smuggle workers up to many eager employers in the United States.
The L.A. Times submerged Kelly’s judgment under 46 paragraphs and numerous slams on President Donald Trump, including the claim that Trump’s effort to enforce border law is a “harsh immigration” measure.
Kelly’s charge is being hidden even as Democrats and establishment media outlets praise him for using his power to muffle Trump’s pro-American policies, including his preference for a lower level of overseas military activity.
The newspaper also tried to smear Trump’s border defense push as a campaign scare while also admitting that migration is rising amid congressional passivity:

Asked if there is a security crisis at the Southern border, or whether Trump has drummed up fears of a migrant “invasion” for political reasons, Kelly did not answer directly, but said, “We do have an immigration problem.”
From the 1980s to the mid-2000s, apprehensions at the border — the most common measure of illegal immigration — routinely reached more than 1 millionmigrants a year.

Today, they are near historical lows. In the fiscal year that ended in September, border authorities apprehended 521,090 people.

Nationwide, the U.S. establishment’s economic policy of using legal migration to boost economic growth shifts wealth from young people towards older people by flooding the market with cheap white collar and blue collar foreign labor. That flood of outside labor spikes profits and Wall Street values by cutting salaries for manual and skilled labor of blue collar and white collar employees.
The cheap labor policy widens wealth gaps, reduces high tech investment, increases state and local tax burdens, hurts kids’ schools and college education, pushes Americans away from high tech careers, and sidelines at least five million marginalized Americans and their families, including many who are now struggling with fentanyl addictions.
Immigration also steers investment and wealth away from towns in heartland states because coastal investors can more easily hire and supervise the large immigrant populations who prefer to live in coastal cities. In turn, that investment flow drives up coastal real-estate prices, pricing poor U.S. Latinos and blacks out of prosperous cities, such as Berkeley and Oakland.
Posted by The Mexican Invasion & Occupation at 10:47 AM No comments: Links to this post