SHERIFF JOE ARPAIO - THE MAN WHO DID MORE FOR OUR BORDERS IN ONE DAY THAN SWAMPER TRUMP HAS EVER DONE, SEEKS ANOTHER TERM


Joe Arpaio announced Sunday that he is seeking a seventh term as sheriff of Maricopa County, Arizona, promising to re-open his “tent-city” jail and bring back tough-on-crime policies.

Arpaio—who was unseated in 2016 after spending 24 years on the job—is seeking to challenge the incumbent Paul Penzone, a Democrat, in the 2020 sheriff’s race.
“On this day, August 25, 2019, after consultation and approval from my wife of 61 years, Ava, I have decided to run to be re-elected Sheriff,” Arpaio said in a news release. “Watch out world! We are back!”
Arpaio, a big supporter of President Donald Trump, also added that he wants to “Make Maricopa County Safe Again.”
Arpaio served as Maricopa’s sheriff between 1993 and 2016. During that time he made a reputation for himself as being tough on crime for providing strict punishments to jail inmates and cracking down on illegal immigration.
His efforts drove civil liberties advocates crazy and made him popular among tough-on-crime conservatives.
Arpaio, who has called himself “America’s toughest sheriff,” made national headlines when he opened up his “Tent City” jail in the desert, where temperatures would reach over 100 degrees and inmates were made to wear pink jumpsuits.
In his run for office, he has promised to bring back the “Tent City” jail and crack down on “Arizona laws that deal with drug trafficking, sex trafficking, and other crimes associated with the border and illegal immigration.”
While Arpaio is well known for his strict jail policies, he is also well known for allegedly targeting illegal aliens.
Arpaio was found guilty of criminal contempt in 2017 for allegedly defying a judge appointed by former President Bill Clinton, who ordered him to stop patrolling and targeting illegal aliens.
Trump pardoned Arpaio within the year, citing his years of service to the country.
Arpaio ran for U.S. Senate in 2018, but lost his bid to then-Rep. Martha McSally (R-AZ) in the Republican Primary.


Posted by The Mexican Invasion & Occupation at 2:35 PM No comments:

IT IS TIME TO DISENGAGE THE AMERICAN ECONOMY FROM CHINA'S BLOOD SUCKING - SO WHAT WILL THE WALMART STORES SELL IF THEY DON'T HAVE BOATLOADS OF CHINESE CRAP MADE BY SLAVE LABOR???


Ethics and Public Policy Center Senior Fellow Henry Olsen, a Washington Post columnist and author of the book The Working Class Republican: Ronald Reagan and the Return of Blue-Collar Conservatism, joined SiriusXM host Alex Marlow on Tuesday’s Breitbart News Daily to discuss the trade war with China and the vital objective of separating American interests from the Chinese economy.

LISTEN:
Marlow proposed that President Donald Trump was “one of only one or two people, at the most, who seemed to understand how big of a threat China was,” but now “everyone kind of gets it.”
“I think that the Chinese are seeing now that they can’t simply fob the president off with some purchases of soybeans and a temporary reduction in the trade deficit. Consequently, I don’t think the negotiations are going well,” Olsen said of the current status of the trade war.
“I think that’s a good thing, because I think it’s time for the American economy to disengage from China,” he judged.
“We need to stop funding and building our geopolitical adversary with our minds, money, and market. Consequently, not having a quick deal, an end to the trade negotiations, is in the American interest, even if it’s not in the interest of every American business,” he said.
Olsen predicted that President Trump, conscious of the damage a slowing economy could do to his re-election prospects, will propose growth-oriented tax relief at the proper time to counter negative effects from the trade war.
“They don’t want to talk the economy down. If they are arguing in favor of stimulus now, then that’s kind of sending a signal to the markets that the president thinks the economy is going south,” he explained.
“I think what’s going to happen, this is my prediction, is that there will be a tax cut proposed in the State of the Union address in January of 2020,” he said.
“Whether the president goes with his instincts or whether the president goes with his advisers is the big question. I think he will go with his instincts,” Olsen anticipated.


Posted by The Mexican Invasion & Occupation at 10:22 AM No comments: 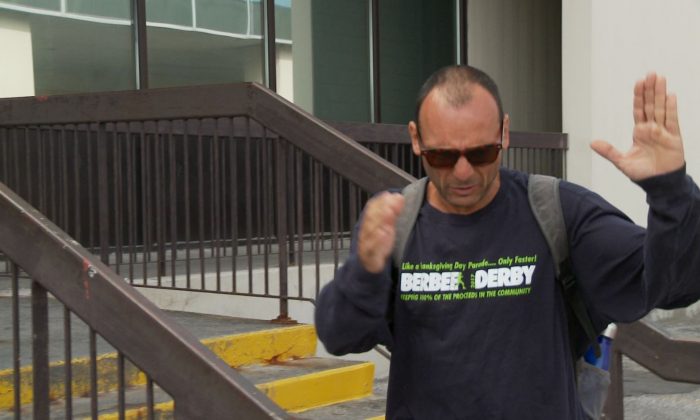 Fabio Guerrieri, who was arrested for allegedly sabotaging The Epoch Times newspaper boxes, outside the Ontario Court of Justice in North York, Ont., on Aug. 26, 2019. (NTD Television)
CANADA

https://www.theepochtimes.com/man-arrested-for-long-term-vandalism-of-epoch-times-newspaper-boxes-in-toronto_3056993.html
Publisher says there has been a systematic effort to damage paper’s operations
BY OMID GHOREISHI, EPOCH TIMES
Share
TORONTO—A man suspected of vandalizing newspaper boxes belonging to The Epoch Times over a period of several months was arrested by Toronto Police on Monday, Aug. 26 morning.
Fabio Guerrieri, 50, was observed stealing newspapers from an Epoch Times box near Yonge Street and Finch Avenue, and was arrested before he could vandalize the box, police said.
“This morning we concluded an investigation into ongoing damage being caused to newspaper boxes of the publication Epoch Times,” said Detective Corey Jones.
“This individual had attended this location on several previous occasions. With the assistance of observation and surveillance that had been done by the publication themselves in partnership with the police, we were able to identify an individual approaching the boxes,” Jones said.
Jones said after police identified themselves and attempted to arrest him, the suspect fled. The officers chased after him and a physical struggle took place before he could be arrested.
For months, over 70 newspaper boxes in Toronto belonging to the independent news organization have been the target of vandalism. This included the papers in the boxes being stolen, the boxes being damaged, and foul-smelling garbage and dog feces being smeared around inside the boxes, staff members report.

Initially, only the boxes for the English edition were targeted, but later the Chinese edition was hit by theft and vandalism as well.
In most cases, the inside plastic support that holds the papers was also damaged, so no paper could be shown in the window. The supports were repeatedly broken, often the day after staff had fixed them. In some cases, the front window of the boxes was broken as well. Also, boxes were occasionally flipped upside down, while the nearby boxes belonging to other publications were left untouched.
Cindy Gu, the publisher and president of The Epoch Times in Canada, says the vandalism caused major damage to the business as the paper couldn’t be distributed to readers, and the staff had to spend considerable amount of time investigating the issue as well as constantly fixing, cleaning, and re-loading the boxes.
“Our business has been seriously disrupted because of this theft, and our readers can’t get the information they rely on from our newspaper,” Gu said.  “It’s really heartbreaking for our staff to see their hard work not getting to our readers.”
Gu says the vandalism started in early April, when the newspaper was featuring special coverage of China and human rights abuses in the communist country.
“Since December 2018, we have had in-depth reports and special coverage on Huawei and its connection with the Chinese regime, and later we had five weeks of special coverage on the use of torture in China, as the detained Canadian Kovrig also underwent torture in the form of sleep deprivation in China,” Gu said.
She adds that acts of vandalism or interference to the paper’s operations have occurred in other cities and countries as well, and says there has been a systematic campaign to damage the publication since it was started.
After initial occurrences of vandalism in Toronto, Epoch Times staff set up surveillance teams to record the perpetrator in action.
In videos recorded at different locations in downtown and North York, the suspect can be seen approaching a box, opening the front window, breaking the support inside that holds the display paper, and taking all the papers. Then he would head off to the next targeted box and repeat the damage.
The staff report that the man didn’t walk in a direct path to his subsequent targets, but rather zigzagged or even backtracked before proceeding to the next box, suggesting he was trained to avoid surveillance.
The staff were asked not to confront the suspect for safety reasons.

Guerrieri has been charged with mischief over $5,000. He appeared before a judge on Aug. 26, and was released after taking an oath to not go near Epoch Times newspaper boxes. His next court appearance is on Sept. 19.
Gu says she is thankful to the police for catching the suspect, and adds she hopes “the justice system helps ensure such incidents, which really crippled our operations, don’t occur again.”

The Epoch Times was established in 2000 in the United States, with the Canadian edition being launched later the same year. The publication is now available in 23 languages in different countries around the world. In Canada, it is published in English and Chinese.
The paper is general interest but maintains a special focus on issues related to China, including suppression of human rights by the Chinese communist regime and the regime’s attempts to influence and infiltrate other countries.
Since the early days, there have been ongoing cases of vandalism against the paper in different parts of the world.
Recently in Queens, New York, Epoch Times newspaper boxes were vandalized, with the newspapers inside one of them even set ablaze on Aug. 19.  Earlier this year, also in New York, a man was arrested and charged with threatening a woman after she tried to stop him from throwing away papers that he took from an Epoch Times box.
In a previous interview, Huang Wanqing, deputy editor-in-chief of the Chinese-language edition of The Epoch Times, said that incidents of sabotage tend to escalate when there is major news relating to China, such as the pro-democracy protests in Hong Kong.
“The Chinese Communist Party is most scared of our reporting,” Huang said.
In Canada, besides Toronto, there have been several cases of vandalism in Vancouver, and this has intensified since The Epoch Times’ special coverage on China and Huawei. In Calgary, staff report that in recent months, papers are constantly stolen from about a dozen boxes around the city.
In 2006, four unidentified men broke into The Epoch Times office in Hong Kong, smashing a glass door at the entrance and causing other damage inside the office.
“China’s authoritarian leaders are maintaining a systematic policy of intimidation and censorship directed against dissident voices and independent media, both inside and outside of the country,” said Aidan White, general secretary of the International Federation of Journalists, at the time. “This latest vandalism is part of a brutal vendetta that cannot be tolerated.”
Earlier the same year, the publication’s head of IT was attacked in his home in Atlanta, Georgia, and severely beaten by a gang of men who looked Asian. The men only stole his work-related computers.
“These several cases of sabotage against our publication show the cowardice of those behind the campaign to damage our operation,” Gu says. “But none of these tactics will deter our team from continuing to report truthfully and bringing our award-winning, independent journalism to our readers.”
Additional reporting by April Zhu, Becky Zhou and Cathy He.
Follow Omid on Twitter: @OGhoreishi
Posted by The Mexican Invasion & Occupation at 10:04 AM No comments: