Companies will face greater pressure in 2020 to recruit and train blue-collar Americans and also to pay extra wages, say company officials and economists.
Under the headline, “Employers Turn to On-the-Job ‘Boot Camps’ to Fill Out Workforce,” the Wall Street Journal reported Dec. 22:

LOS ALAMOS, N.M.—Michael Colyer doubled his salary when he got into a program that trains workers to monitor toxic waste at Los Alamos National Laboratory.
Mr. Colyer, 40, has lived in the shadow of the sprawling nuclear facility most of his life, but thought a job there was out of reach because he lacked a college education. “Los Alamos is kind of like a mining town,” Mr. Colyer said. “The lab is the business here, and without a degree, it’s hard to get in.”
His break came through one of several short-term job training programs, or boot camps, launched this year in New Mexico aimed at lowering unemployment and training workers for hard-to-fill jobs, a task employers across the country have struggled with in a tight labor market.

“There are not a lot of people to choose from,” [Sam Wolkenhauer, an economist for the Idaho labor department,] said. “So you are competing for a small pool of workers.”
Dan McMackin, spokesperson for United Parcel Service, or UPS, said the company is looking to add 200 seasonal employees in the Boise area. “The pay range is from $14, up from $11 last year, up to about $30 an hour depending on the job,” he said.
…
Like UPS, Wolkenhauer said, “companies will have to offer higher wages, because they are bidding against each other or will have to come up with other ways to recruit people.”

The modest pay raises are good news — although not great news — for Americans during President Donald Trump’s third Christmas. The good news likely will help Trump’s reelection change, especially because the wage benefits are also flowing to Americans in sidelined states, such as Ohio.
“US firms keep hiring, easing worries of weakening economy,” the Associated Press reported December 6:

Some recruiters have overhauled their approach to hiring and retention as the competition for workers has tightened. Beth Thress, vice president of human resources at a Cincinnati-based company that owns two senior living centers, said it became harder to retain nursing aides and housekeepers once such retailers as Walmart and Target increased their pay.
So Thress went to the board of Maple Knoll Communities, a nonprofit that employs 675 people, and won approval to raise starting pay. She also offered more flexible schedules and set up an emergency fund for employees. “There’s just a lot more competition, you’ve got meet their needs in some form or fashion,” she said. “It’s been a real shift in mentality.”
…
Becky Frankiewicz, president of Manpower Group North America, says her organization often tells its corporate clients to consider loosening their job listing criteria. “We are counseling companies to look at the requirements they set for a job and ask if they are really mandatory or just nice to have,” she said.

The companies are trying to find, train, and recruit sidelined Americans because Trump’s “Hire  American” policy is preventing Congress from delivering more foreign workers to U.S. companies via the nation’s immigration routes. The resulting shortage of non-college workers is forcing companies to raise pay for blue-collar workers at a faster rate than the pay gains for college-trained workers.

James Pethokoukis
✔@JimPethokoukis
This is a tough chart for Democrats. 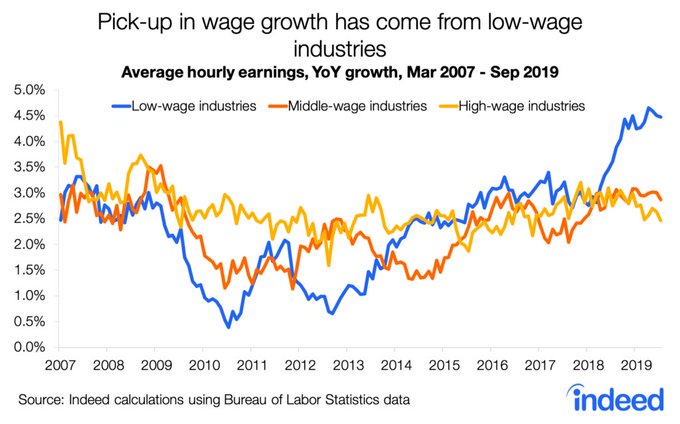 25 people are talking about this


The chart’s blue line shows stable pay raises for college graduates, so disproving the industry’s routine claims of a college graduate labor shortage.
Business groups have been using a variety of strategies to minimize pay raises since Trump was inaugurated. For example, they have pressured Congress to block border security measures — so allowing at least 500,000 migrant adults over the southern border since 2017. They failed to prevent a cut back in legal refugees, but they have blocked cutbacks on legal immigration and have largely blocked reform of the guest worker programs that import at least 600,000 laborers each year.
Investment firms on Wall Street also use their computer-assisted oversight over many companies’ payroll plans to pressure CEOs to keep pay raises to the minimum.
Business groups also claim that the wage raises are caused by Trump’s tax cuts, not by his curbs on migrant workers. But employers and investors generally oppose wage raises — until their workforces start leaving for better options at other firms.
The business strategies have paid off, partly. In 2018, 62 percent of employees did not get pay raises. But in 2019, Trump’s zig-zag immigration policies and the market pressure forced that no-raise number down 50 percent.
“Of the near 49 percent who did see higher pay over the past 12 months, about 28 percent received a raise, while 12 percent found a better paying job and 10 percent found both,” WHAS11.com reported, adding:

People who switch jobs are more likely to get pay raises, the report said, adding:

Households that bring in less than $30,000 a year were most likely to look for a new job over the next 12 months, with nearly two out of five (or 37 percent) reporting so. Those with no more than a high school diploma also looked more willing to start their job search, with 33 percent reporting, as opposed to a quarter of those who have some college and 20 percent who have a degree.

The pay raises in the blue, red, and orange chart, however, are being kept lower than otherwise because the federal government brings in roughly one million immigrants every year, just as four million young Americans try to find jobs.
Business advocates are complaining about the pay raises that tend to force down stock prices on Wall Street:

The labor market challenge has worsened even though economic growth has slowed a bit in 2019. Demographics drive the problem. The scariest chart about the future shows virtually no growth in the working age population in the decade from 2020 through 2030.
But it’s even worse than the scary chart shows, because businesses have been hiring the least-attractive job applicants: those without diplomas, without work experience, and with prison records. These are not the preferred applicants, but they are available. Most of these new hires will turn out to be good employees, but many will not hit the ground running with high productivity, reliability and customer service. This means that many of the people who will be available in 2020 are even less attractive than those who got jobs in 2019.

Florida’s unemployment rate dropped to a historic low of 3.1 percent in November, according to state figures released Friday. That’s a feat the state has only achieved two times in the past 40 years, the Florida Department of Economic Opportunity said.

“Oregon’s unemployment rate in November was the lowest its been in at least 43 years, according to the state employment department,” the Register-Guard reported December 23.
College graduates are gaining too, but not as much as blue-collar workers because the federal government allows companies to keep roughly 1.5 million foreign college graduates workers in U.S white-collar jobs.


A second report in the Wall Street Journal said on December 20 companies are trying to recruit college graduates early:

Estb. media and esp. WashPo journos cannot, or dare not, follow the $$$ in immigration politics.
For example, the WashPo article on @SenMikeLee's @S368 bill to expand the outsourcing of U.S. grads' jobs.
Maybe b/c the money ends up in Jeff Bezos' pocket. http://bit.ly/2tChhYt

The Washington Post has covered Sen. Mike Lee's S.386 giveaway to Indian visa-workers -- but it excluded the voices of American graduates.
breitbart.com

292 people are talking about this

Posted by The Mexican Invasion & Occupation at 2:24 PM No comments: