New Mexico State Police are investigating the discovery of a dead newborn baby found in a trash bag at a trailer in Alcalde after a father called “with concerns about his unborn child.”

Alcalde, NM – On August 17, 2019 a father called the New Mexico State Police with concerns about his unborn child. The father said that he returned to...
dps.nm.gov


The father notified police Saturday, state police reported, with his concerns when he returned from Colorado to his home in La Madera and found his girlfriend no longer appeared pregnant. When the father asked his girlfriend about the child, she would not tell him what happened to the baby.
The father also reported his girlfriend is a frequent heroin user and used the drug while pregnant, reported the Albuquerque Journal Wednesday. Police officers were informed the mother may have injected the baby with heroin.
According to the state police report:

The body of the baby was taken to the Office of the Medical Investigator in Albuquerque for autopsy to determine the cause of death, says the report.
According to the Journal, when police arrived at the woman’s camper trailer in Alcalde Friday night, they saw blood on the front porch. The woman said she gave birth to the baby in La Madera on an unknown date and “passed out due to the pain of giving birth.”
The woman said when she awoke she found the baby was unresponsive.
Officers observed the woman showed signs of heroin use, including frequent passing out and awakening.
“Her statements were inconsistent and not making logical sense,” a search warrant affidavit filed in Santa Fe District Court revealed.
Officers also “smelled the smell of death and began to look for the newborn baby,” the affidavit said, and continued that police found a black trash bag near a toilet with a black tote bag inside it that contained the body of the baby.
The father reportedly said he had been told his girlfriend had been injecting the baby with heroin to keep the child from going through withdrawal symptoms.
According to the report, state police have not identified the sex of the baby and no charges have been filed to date.


Mexico City announced a major seizure of more than 34 tons of precursor chemicals and methamphetamine during a weekend raid in Michoacán. 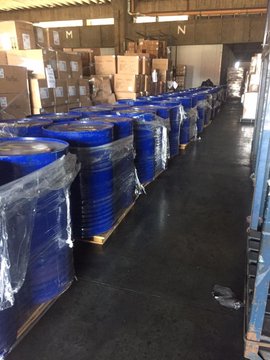 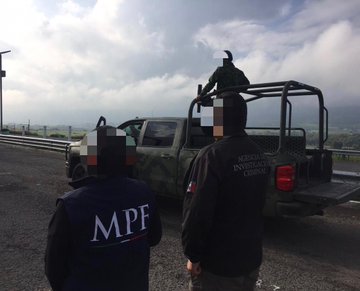 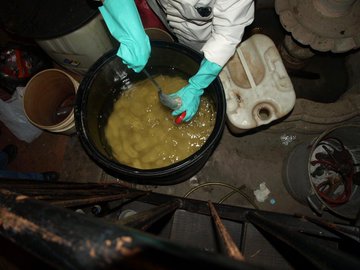 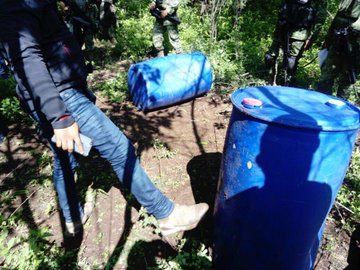 
The Federal Attorney General’s Office (FGR) announced the seizure, which consisted of 34 tons and approximately 12,403 gallons of precursor chemicals and methamphetamine in solid and liquid forms. The Federal Attorney General’s Office did not release a breakdown of specific substances discovered, nor the location in the state. Michoacán’s coastline provides valuable seaports for outbound product smuggling and incoming precursor loads. The chemicals were believed destined for major meth labs throughout the region.
The FGR announced that expert evidence personnel took responsibility for identifying, counting, weighing, sampling, documenting, and disabling the seized product—in addition to hazardous material cleanup tasks. The substances were transferred to a company in Mexico state that specializes in hazmat disposal under the guidance of law enforcement and military forces.
Michoacán is the center of highly disputed turf between the Cártel de Jalisco Nueva Generación (CJNG) and Los Viagras’ regionally aligned gangs. Breitbart Texas recently reported on the grisly discovery of 19 corpses in Uruapan, to include nine badly beaten and tortured bodies that were hung from an overpass. The CJNG claimed responsibility and placed numerous narco-banners to that effect.
Robert Arce is a retired Phoenix Police detective with extensive experience working Mexican organized crime and street gangs. Arce has worked in the Balkans, Iraq, Haiti, and recently completed a three-year assignment in Monterrey, Mexico, working out of the Consulate for the United States Department of State, International Narcotics and Law Enforcement Program, where he was the Regional Program Manager for Northeast Mexico (Coahuila, Tamaulipas, Nuevo Leon, Durango, San Luis Potosi, Zacatecas.) You can follow him on Twitter. He can be reached at robertrarce@gmail.com


Posted by The Mexican Invasion & Occupation at 4:29 PM No comments: Links to this post