ROMNEY PROMISES TO SPEAK OUT AGAINST THE SWAMP KEEPER

Incoming Senator Romney Publishes Blistering Op/Ed on Trump's Character. Why, and Why Now? 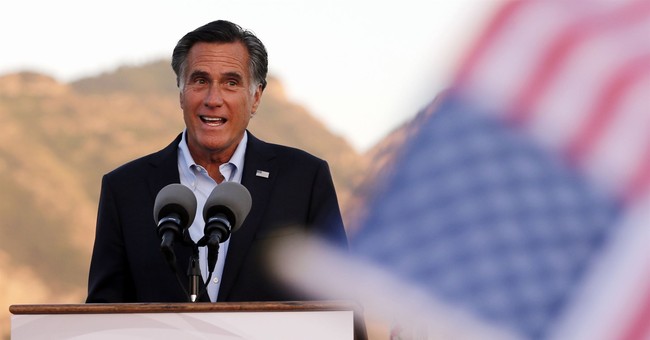 As you've no doubt heard, incoming Utah Senator Mitt Romney -- the former Massachusetts Governor and 2012 Republican presidential nominee -- has penned an op/ed for the Washington Post in which he sharply criticizes President Donald Trump.  Prior to being sworn in this Thursday, the highest-profile freshman in the upper chamber has ignited the political news cycle with an essay that bluntly asseses the president's deficiencies.  He mentions a few policy disagreements along the way, but fundamentally focuses on questions of comportment and character:

It is well known that Donald Trump was not my choice for the Republican presidential nomination. After he became the nominee, I hoped his campaign would refrain from resentment and name-calling. It did not. When he won the election, I hoped he would rise to the occasion. His early appointments of Rex Tillerson, Jeff Sessions, Nikki Haley, Gary Cohn, H.R. McMaster, Kelly and Mattis were encouraging. But, on balance, his conduct over the past two years, particularly his actions last month, is evidence that the president has not risen to the mantle of the office...To a great degree, a presidency shapes the public character of the nation. A president should unite us and inspire us to follow “our better angels.” A president should demonstrate the essential qualities of honesty and integrity, and elevate the national discourse with comity and mutual respect. As a nation, we have been blessed with presidents who have called on the greatness of the American spirit. With the nation so divided, resentful and angry, presidential leadership in qualities of character is indispensable. And it is in this province where the incumbent’s shortfall has been most glaring.

These stinging sentences have provoked high-decibel reactions, many of which have been quite predictable. A large contingent of liberals, who just a few years ago treated Romney as history's greatest monster, are suddenly cheering him as a truth-teller. Many others are preemptively complaining that he'll be "complicit" with Trump anyway, because he'll refuse to vote against the Trump agenda lock, stock, and barrel. This is one of the more cynical criticisms of Republicans writ large, in which some leftists insist that the only meaningful way to oppose Trump is to turn against core conservative beliefs, thus joining the reflexive resistance.  Romney explicitly states that he has no such intention, vowing to lend his vote to advance policies and nominees that promote ideals he sees as beneficial to the country.  Meanwhile, pro-Trump Republicans are seething at the recently-minted Utahan, calling him a disloyal and ungrateful preener.  Trump's 2020 campaign manager tweeted this incoherent salvo:

The "warm drink" line may have sounded better in his head.  Awkwardly, Romney's own niece, the RNC Chairwoman, also lobbed her own clapback -- piggybacking on the president's condemnation:
Before getting into Romney's possible motives here, I'll say this: As far as Trump tweets go, this one is relatively muted.  Senator Romney will, in fact, be a "team player" on numerous fronts.  I anticipate that he'll be a reliable vote in favor of conservative policies and judges, and that he'll be considerably less willing to play along with certain Democratic stunts than late-stage Jeff Flake.  As for McDaniel's message, it strikes me as little more than an appeal to tribalism, a phenomenon against which her uncle specifically warns in his piece.  If a duly-elected Republican has concerns about the leader of the party, he or she is absolutely free, if not duty-bound, to air them.  Voters can judge accordingly.  I should add that the validity of those concerns is not contingent upon the interests of the Democrats or the media.
Trump loyalists who call Romney an ingrate are mostly missing the point.  It's true that Romney welcomed the president's endorsement shortly after announcing his bid to replace Orrin Hatch, and that he entertained the president's consideration for Secretary of State after the 2016 election.  It's also true that Romney has sought or accepted Trump's backing at various moments in his political career, particularly when he perceived Trump's blessing to be useful to his own interests.  But it would be absurd to suggest that Romney somehow owes his Senate seat to Trump.  He was already going to be the odds-on favorite to win both the primary and general elections in Utah (whose citizens are not exactly Trumpist Republicans) in 2018; indeed, he prevailed by massive margins in both contests, having issued a handful of Trump denunciations along the way.  And the Secretary of State gambit appeared to be Romney exhibiting a willingness to serve the country, despite harboring suspicions that his very public courting may have been an elaborate and vindictive act of retaliatory humiliation.
In short, Trump and Romney owe each other virtually nothing at all at this point.  But both have been chosen by Republican voters, then general election voters, to represent them -- so they owe it to those constituents to work together as much as possible to achieve worthwhile ends.  As for the various theories behind Romney's "play" here, I do not believe he's laying the groundwork to challenge the incumbent in a 2020 primary.  Even if the Trump presidency were to tailspin dramatically ahead of that election cycle, and the need for a replacement nominee became widely obvious and acutely-felt (this is a major hypothetical, obviously), any remotely viable challenger would need to have the capacity to unite GOP partisans.  A tut-tutting "I-told-you-so" campaign would alienate vast swaths of the base, inspiring a nasty backlash.  I also very much doubt that Romney is under any illusions about achieving much "strange new respect" from the Left.  He's going to be a conservative Senator from a conservative state, so on substance, his values and interests will rarely align with the Democrats and media liberals he's supposedly courting.
My best assessment, based on the available evidence, is that as the former standard-bearer of the party, and having won an overwhelming victory in November, Mitt Romney is putting down a few markers, not all of which are directed at the president.  Read these passages carefully:

It is not that all of the president’s policies have been misguided. He was right to align U.S. corporate taxes with those of global competitors, to strip out excessive regulations, to crack down on China’s unfair trade practices, to reform criminal justice and to appoint conservative judges. These are policies mainstream Republicans have promoted for years. But policies and appointments are only a part of a presidency...I look forward to working on these priorities with Senate Majority Leader Mitch McConnell (R-Ky.) and other senators. Furthermore, I will act as I would with any president, in or out of my party: I will support policies that I believe are in the best interest of the country and my state, and oppose those that are not. I do not intend to comment on every tweet or fault. But I will speak out against significant statements or actions that are divisive, racist, sexist, anti-immigrant, dishonest or destructive to democratic institutions.

Romney is very plainly explaining how he will approach his job. To the disappointment of liberals, he will help the GOP majority pursue conservative outcomes, including the installation of dozens of additional Trump-appointed federal judges. To the disappointment of the media, he will decline to weigh in on every controversial utterance or social media outburst from the president. And to the disappointment of Trump acolytes, he will occasionally step forward to condemn certain presidential excesses that he sees as harmful the country or the institution of the presidency. This philosophy is, in my view, entirely defensible and sound. And it's been clearly articulated by a man who, in his 71 years, has accomplished a great deal in the private sector and in the political realm. He has the stature and success to tackle his new job without fear, in accordance with his ideological beliefs (some of which, have certainly shifted over time), his judgment, and his personal moral compass. The Senate will be better off because of it. And on important issues, he'll be more of a Trump ally than many people seem to realize, detractors and fleeting admirers alike.

Romney Promises To Speak Out Against Trump On Matters Of 'Significance' 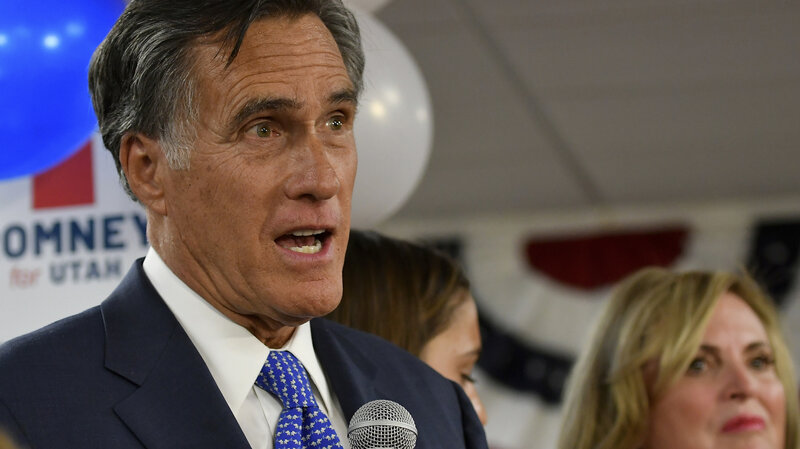 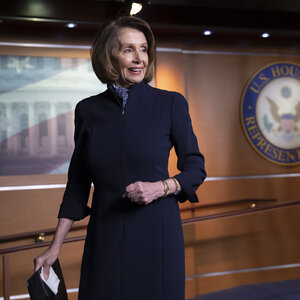 Romney cited three instances in Trump's first two years as president in which he disapproved of how the president conducted himself: his response to the racist violence in Charlottesville, Va.; his support of Roy Moore, the Alabama Senate candidate who was accused of sexual misconduct with teenage girls while he was an adult; and Trump's continued vitriolic attacks on the media.
At times, Romney's essay in The Washington Post sounded like a campaign manifesto for a potential 2020 primary challenge to Trump. "The world needs American leadership," Romney wrote, "and it is in America's interest to provide it."


Romney opposed Trump's candidacy in 2016, calling him "a phony, a fraud," but was willing to join his administration and met with the president-elect over dinner; he was widely considered to be a candidate for secretary of state. He was also endorsed by Trump in his Senate bid.But Romney also ruled out a 2020 bid. "No," he told CNN's Jake Tapper. "You may have heard, I ran before. I've had that experience. I acknowledge the president was successful."
Not surprisingly, Trump quickly responded on Twitter to Romney's op-ed, asking, "is he a Flake?" referring to outgoing Arizona Sen. Jeff Flake, a prominent GOP critic of Trump. The president said Romney "should be happy for all Republicans" and should be "a TEAM player."

Here we go with Mitt Romney, but so fast! Question will be, is he a Flake? I hope not. Would much prefer that Mitt focus on Border Security and so many other things where he can be helpful. I won big, and he didn’t. He should be happy for all Republicans. Be a TEAM player & WIN!

70.7K people are talking about this
Twitter Ads info and privacy
Other Republicans joined in Trump's criticism, including Republican National Committee Chairwoman Ronna McDaniel, who is Romney's niece. "For an incoming Republican freshman senator" to attack Trump, she tweeted, "is disappointing and unproductive."

POTUS is attacked and obstructed by the MSM media and Democrats 24/7. For an incoming Republican freshman senator to attack @realdonaldtrump as their first act feeds into what the Democrats and media want and is disappointing and unproductive.

Donald J. Trump
✔@realDonaldTrump
Here we go with Mitt Romney, but so fast! Question will be, is he a Flake? I hope not. Would much prefer that Mitt focus on Border Security and so many other things where he can be helpful. I won big, and he didn’t. He should be happy for all Republicans. Be a TEAM player & WIN!

25.6K people are talking about this
Twitter Ads info and privacy
Romney responded on CNN to his niece's critique, saying it was "more civil" than it might have been across the Thanksgiving dinner table. He called her a strong supporter of the president and noted that she was doing her job as chairman of the Republican Party.
Romney also wrote that "not all of the president's policies have been misguided," citing corporate tax cuts, reduced regulations and the appointment of conservative judges. Romney said he will support Trump policies that he believes are "in the best interests of the country and my state."

However, Romney added a caveat: "I do not intend to comment on every tweet or fault."But Romney said he will speak out against "significant statements or actions that are divisive, racist, sexist, anti-immigrant, dishonest or destructive to democratic institutions."
NPR's Domenico Montanaro contributed to this report.
Posted by The Mexican Invasion & Occupation at 6:10 PM No comments: