AMERICA'S STAGGERING DEBT - SHOULD U.S. STOP SQUANDERING TRILLIONS ON MUSLIM DICTATORSHIPS OVER THERE? 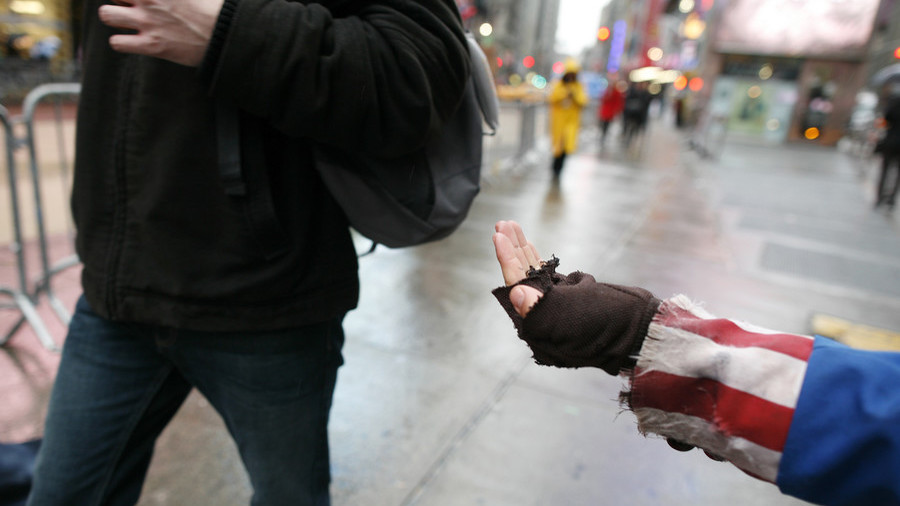 A protester dressed as a panhandling Uncle Sam stands in New York's Time Square © Brendan McDermid / Reuters
The latest data from the US Treasury Department shows America’s gross national debt ballooned by $1.2 trillion to a breathtaking $21.52 trillion on September 28, the last day of fiscal year 2018.
During that period, the US national debt increased by 6.3 percent and now amounts to 105.4 percent of the country’s current-dollar Gross Domestic Product (GDP).
According to the Treasury Department’s Bureau of the Fiscal Service, the national debt at the end of fiscal year 2017 was an estimated $20.25 trillion. The large deficit is a result of federal benefit payments pushed into August instead of September, the service said.
“Where the threshold is too high, we don’t know. But rising forever is definitely an unsustainable, big problem. And we’re the only advanced economy on an unsustainable course,” economist Jason Furman at Harvard’s Kennedy School of Government told the Public Radio International (PRI).
“We’re the only advanced economy where the debt is expected to rise as a share of GDP over the next five years. All the other advanced economies, it’s falling,” he added.
via GIPHY
The budget deficit hit $214 billion in August, which is double the amount compared with the same period a year ago.
The Congressional Budget Office (CBO) estimates that the “deficit” will be $895 billion in fiscal 2018. It said that in just a few years the US will be paying more in interest to pay down the national debt than on the military or Medicare.
“The fact that we are in the 10th year of an economic expansion now and debt keeps rising is really extraordinary and very irresponsible. Unless Congress fundamentally changes its path, we are headed for a Greek-type crisis,” said Chris Edwards, director of tax policy studies at the Cato Institute, a think tank in Washington.
He explained: “A rising debt could create this crisis situation where interest rates spike, the government has to take drastic actions, perhaps cutting benefits, social security and other benefits radically, or hiking taxes dramatically, which will damage the economy.”
For more stories on economy & finance visit RT's business section
Posted by The Mexican Invasion & Occupation at 2:26 PM No comments:

AMERICA: IT'S MUCH, MUCH, BETTER BEING MEXICAN - "CHEAP" LABOR MEXICANS ARE STILL GETTING THE JOBS FIRST - NO E-VERIFY

This is why you work From Jan - May paying taxes to the government ....with the rest of the calendar year is money for you and your family.

Take, for example, an illegal alien with a wife and five children. He takes a job for $5.00 or 6.00/hour. At that wage, with six dependents, he pays no income tax, yet at the end of the year, if he files an Income Tax Return, with his fake Social Security number, he gets an "earned income credit" of up to $3,200..... free.

He qualifies for Section 8 housing and subsidized rent.

He qualifies for food stamps.

He qualifies for free (no deductible, no co-pay) health care.

His children get free breakfasts and lunches at school.

He requires bilingual teachers and books.

He qualifies for relief from high energy bills.

If they are or become, aged, blind or disabled, they qualify for SSI.

Once qualified for SSI they can qualify for Medicare. All of this is at (our) taxpayer's expense.

Working Americans are lucky to have $5.00 or $6.00/hour left after Paying their bills and his.

“Part of the problem, Santorum said, has been the arrival of millions of unskilled immigrants — legal and illegal — in the United States. "American workers deserve a shot at [good] jobs," Santorum said. "Over the last 20 years, we have brought into this country, legally and illegally, 35 MILLION mostly unskilled workers. And the result, over that same period of time, workers' wages and family incomes have flatlined." SEN. RICK SANTORUM

Seasonally-Adjusted Hispanic-Latino Unemployment Rate (Source: U.S. Bureau of Labor Statistics)
The national seasonally-adjusted unemployment rate for Hispanics and Latinos in the U.S. labor force fell to the lowest level on record in September of 2018, U.S. Bureau of Labor Statistics (BLS) data released Friday show.
In September, the unemployment rate for Hispanics and Latinos, aged 16 and up, was 4.5%, tying July 2018 for the lowest level since the BLS began tracking Hispanic-Latino employment data in 1973.
Hispanic-Latino employment statistics for September 2018:
Posted by The Mexican Invasion & Occupation at 1:13 PM No comments:

The survey of 1,031 registered and likely Texas voters released Sunday showed Cruz with a six point lead over O’Rourke in the more recent CBS battleground tracker poll.
Democrat voters were motivated to vote out of opposition to President Donald Trump while Republican voters indicated their vote for U.S. Senate is motivated out of support for President Trump, according to CBS.
Respondents supporting Cruz indicated a greater draw to his issue stances than personal qualities while O’Rourke supporters relatively evenly supported him on issues and personal qualities.
On immigration and guns, Cruz held double-digit support over O’Rourke. When it came to, as CBS reported it “representing change,” challenger O’Rourke held an approximately 20 point lead over incumbent Cruz.
CBS noted that their “2018 Battleground Tracker is a series of panel studies in the United States.” The tracker followed also Arizona, Tennessee, and New Jersey U.S. Senate races in the report released Sunday. The Texas poll conducted by YouGov interviewed 1,031 registered Texas voters from October 2-5. The margin of error in the Texas poll was 3.9.
Michelle Moons is a White House Correspondent for Breitbart News — follow on Twitter @MichelleDiana and Facebook


The Democrats’ Latest Bill to Shield Illegal Aliens
By Jazz Shaw HotAir.comSince we’re on the subject, however, let’s take a moment to examine the premise being put forth with this legislation. The claim here is that we can prevent the pursuit of a person who is guilty of a particular crime simply because they are volunteering to perform a specific good deed to assist children. While individual police have no doubt chosen to look the other way on occasion if some minor scofflaw was in the process of doing a public service, that’s not the norm. It’s also no way to regulate the activities of law enforcement. This bill would basically issue a temporary amnesty to anyone showing up and offering to take in a migrant child. Could that happen from time to time on an unofficial basis? Clearly so, and I wouldn’t have any problem with an ICE agent who decided to do that. But as some sort of blanket, official policy enshrined in law it would be a terrible idea.
. . .

25% HAVE ANCHOR BABIES FOR WELFARE

Hardly Angels, DACA Beneficiaries Run Afoul of the Law
By Jennifer G. Hickey
ImmigrationReform.comA more detailed analysis released in June by U.S. Citizenship and Immigration Services (USCIS) found that almost 8 percent of the 59,786 individuals who have requested DACA status, had arrest records at the time their application was submitted. The crimes included those as serious as assault and battery, rape, murder, and drunk driving. One startling statistic: 199 individuals who requested DACA had 10 or more arrests – and 51 percent of them had their DACA status recently “approved.”

DACA THIEVES: WAVING THEIR MEX FLAGS IN OUR FACES AND THEN CASHING THEIR WELFARE CHECKS
JOBLESS AMERICA: Push 2 for English and go to the end of the line of illegals!

95 MILLION AMERICANS (Legals) HAVE NO WORK AS THE BORDERS ARE FLOODED WITH FOREIGNERS SUCKING UP JOBS, WELFARE AND VOTING DEMOCRAT FOR MORE!
http://mexicanoccupation.blogspot.com/2017/11/john-binder-in-era-of-terrorism-and.html


Border Patrol agents in the El Centro Sector arrested a DACA recipient for allegedly smuggling more than 17 pounds of methamphetamine on Tuesday morning.

Agents assigned to the Highway 86 immigration checkpoint observed a Kia Optima approaching for inspection. Agents referred the 22-year-old Mexican man to a secondary station. The agents identified the man as a recipient of President Barack Obama’s Deferred Action for Childhood Arrivals (DACA) amnesty program.
A K-9 agent alerted to the possible presence of drugs or humans in the trunk of the Optima. Agents reportedly discovered 14 vacuum-sealed packages in the trunk, according to U.S. Custom and Border Protection officials.
Agents examined the packages and determined they were packed with 17.14 pounds of methamphetamine. Officials estimated the street value of the drugs at $34,284.
The agents arrested the DACA recipient on drug smuggling charges and seized the vehicle and drugs. All were turned over to the Drug Enforcement Administration for investigation.
“Every drug seizure our agents make is an important step forward to secure our streets from dangerous narcotics and dangerous people,” El Centro Chief Patrol Agent Gloria I. Chavez said in a written statement. “I commend our agents for the hard work and dedication in keeping our communities safe.”
Officials did not disclose when the Mexican national illegally entered the U.S. or when he received DACA protections.
During Fiscal Year 2018, El Centro Sector Border Patrol agents seized nearly 1,650 pounds of the dangerous drug. The seizure of these drugs deprived drug cartels and dealers of approximately $4.3 million worth of drug sales at street value.
Bob Price serves as associate editor and senior political news contributor for Breitbart Texas. He is a founding member of the Breitbart Texas team. Follow him on Twitter @BobPriceBBTX and Facebook.


‘Unbridled Immigration, Legal and Illegal, Is Taking the Country Down’


“Through love of having children we're going to take over."  Augustin Cebada, Information Minister of Brown Berets, militant para-military soldiers of Aztlan shouting at U.S. citizens at an Independence Day rally in Los Angeles, 7/4/96


This annual income for an impoverished American family is $10,000 less than the more than $34,500 in federal funds which are spent on each unaccompanied minor border crosser.


Members of Congress broadly oppose a legislative nationwide E-Verify mandate for employers because “they know it will work,” said NumbersUSA’s Rosemary Jenks, explaining why E-Verify is not being pushed in congressional negotiations for an amnesty deal for recipients of the Obama administration’s Deferred Action for Childhood Arrivals (DACA). Jenks further noted that both parties are beholden to special interests supportive of “mass migration.”

"Congress must prioritize four repairs for the

1. Ending chain migration and the visa lottery;
2. Mandating employer use of E-Verify;
3. Construction of a southern border wall; and
4. Interior enforcement of immigration law."

The Chicago Model: Population Replacement and the Transformation of the USA

Posted by The Mexican Invasion & Occupation at 12:52 PM No comments: