PETE BUTTIGIEG SAYS DON'T MAKE ME TALK ABOUT THE AMERICAN WORKER, AMERICA'S HOUSING AND HOMELESS CRISIS OR THE MEX CRIME TIDAL WAVE..... JUST GIVE MY ILLEGALS AMNESTY SO THEY CAN BRING UP THE REST OF THEIR FAMILIES AND VOTE DEM FOR MORE!!!

Source: AP Photo/Paul Sancya
Black radio host, Charlemagne tha God isn’t one to give easy interviews with the 2020 Democratic field. The co-host of the popular New York radio show, "The Breakfast Club," Charlemagne has already scalped Sen. Elizabeth Warren (D-MA). He called her out for culturally appropriating the Cherokee Nation. He wasn’t going to let it go either. He kept on her and did the job that the wider media should have been doing since 2012. The most damning portion is when he said that Warren was the original Rachel Dolezal.
With South Bend Mayor Pete Buttigieg, Charlemange was no different, pressing the 2020 candidate on if he thinks the reason he’s dropping in the polls is due to him sucking at the recent string of Democratic debates (via Mediaite):

The radio host grilled the South Bend mayor — though notably in an amiable manner — over whether his campaign is “losing momentum” based on static or flagging polls. The consistently optimistic and unflappable 37 year-old candidate refused to agree with that assessment instead focusing on the progress he is making that may not yet be showing up in the polls.
Charlemagne persisted, asking Mayor Pete if he thought he “sucked” in the first debates.
Mayor Pete responded with a laugh, saying no, he did not think that before explaining the odd nature of the debate formats and how he found that particularly challenging.

I mean, with Marianne Williamson shooting ICBMs of love everywhere, I guess I could see that, or it could be that the 2020 field is a total clown show with not a single person who can beat Trump. They all say the same thing. Mayor Pete hasn’t distinguished himself from the rest of the field. And if the Democrats’ top quality for their candidate should be someone who can beat Trump, Mayor Pete of South Bend isn’t it.

Posted by The Mexican Invasion & Occupation at 4:11 PM No comments:

SENATOR DIANNE FEINSTEIN'S BIGGEST BRIBESTER PACIFIC GAS & ELECTRIC WHICH HAS SCREWED CALIFORNIA OUT BILLIONS WANTS TO SCREW CALIFORNIA OUT OF BILLIONS MORE.... Senator Feinstein will be right there as always helping them!

By GEORGE AVALOS | gavalos@bayareanewsgroup.com | Bay Area News Group
PUBLISHED: September 9, 2019 at 3:36 pm | UPDATED: September 9, 2019 at 4:02 pm
PG&E filed a proposal on Monday with a federal court that plots a roadmap for the disgraced and utility to navigate out of bankruptcy and pay off its creditors, including numerous victims of wildfires linked to the company — although the plan caps wildfire-related claims at $16.9 billion.
The reorganization plan proposed by PG&E would cap payments to wildfire victims who filed claims directly against PG&E at $8.4 billion, papers filed in U.S. Bankruptcy Court on Monday show.
The proposal also would cap at $8.5 billion payments to insurance carriers that are seeking reimbursement from PG&E for wildfire claims they paid their customers at $8.5 billion, according to the plan of reorganization filed Monday in connection with PG&E’s Chapter 11 bankruptcy.
PG&E also agreed to pay $1 billion to compensate public entities.
Some estimates have placed PG&E’s wildfire-linked liabilities in the vicinity of $30 billion.
“Under the plan we filed today, we will meet our commitment to fairly compensate wildfire victims and we will emerge from Chapter 11 financially sound and able to continue meeting California’s clean energy goals,” PG&E Chief Executive Officer Bill Johnson said in a prepared release.
PG&E said it would employ a combination of debt and stock to raise the cash to help finance its exit from bankruptcy.
On Jan. 29, PG&E filed for a Chapter 11 filing to reorganize its finances, listing $51.69 billion in debts and $71.39 billion in assets after its finances buckled beneath a forbidding mountain of wildfire-related claims and other liabilities.
PG&E cautioned that the actual amount of payments for wildfire-linked claims can’t be determined until other court proceeds are complete, included a state court case to determine whether PG&E is liable for the lethal Tubbs Fire in the North Bay Wine Country in 2017.
“The plan is a framework for compensating wildfire victims and other stakeholders,” PG&E said in comments emailed to this news organization. “And it’s a critical step in a multi-step process which will be updated as developments require.”
The utility is already a convicted felon for crimes it committed before and after a fatal explosion of natural gas in San Bruno that killed eight. The lethal blast was caused by a combination of PG&E’s flawed record keeping and shoddy maintenance, along with lazy and ineffective oversight by the state Public Utilities Commission, federal investigators determined in 2011.
PG&E’s bankruptcy case could eventually trigger higher monthly power bills for the utility’s customers, depending on the final plan for financial reorganization that is approved by the bankruptcy judge and eventually reviewed by the state Public Utilities Commission.
The company, though, indicated that the proposal, which eventually would have to be approved by the state Public Utilities Commission, wouldn’t necessarily raise rates.
“It’s rate neutral for customers,” PG&E said in comments emailed to this news organization.
State fire investigators have determined that PG&E’s equipment was the cause of 17 destructive fires in 2017. However, PG&E was found not to be the cause of the lethal Tubbs Fire, which was one of the October 2017 infernos, state fire investigators ruled earlier this month. Even so, a county court will determine whether PG&E should be held liable for the Tubbs Fire that roared through sections of Sonoma County and Napa County.
In May, California fire experts determined that PG&E’s equipment caused the deadliest and most destructive fire in California history, a lethal blaze that roared through Butte County in November 2018 and killed 85 people.
The utility also has been found to be responsible for causing a fatal fire that scorched parts of Amador County and Calaveras County in 2015 that’s known as the Butte Fire.
“PG&E clearly understands it has liability for nearly these fires,” said Gerald Singleton, an attorney for numerous fire victims.
It isn’t a major surprise that PG&E is seeking to cap the amount it pays out for wildfire-linked liabilities.
“The company is contending they don’t have to pay full value for a lot of reasons,” Singleton said. “But they admitted their equipment caused every fire except for the Tubbs Fire.”
Posted by The Mexican Invasion & Occupation at 4:08 PM No comments:

Sen. Bernie Sanders (I-VT) predicted on Monday that President Trump will be a “one-term President.”

Sanders, a top tier candidate in the crowded Democrat field, issued his bold prediction in a tweet to his 9.6 million Twitter followers Monday:

Donald Trump is going to be a one-term president.

14.5K people are talking about this


Similar predictions were made in 2016, with Trump’s defeat of Hillary Clinton coming as a shock to political pundits and media personalities across the board. Sanders told supporters during a rally in Syracuse, New York, in 2016 that “Donald Trump will not become president”:
Sanders made a similar prediction at a rally in Salem, Oregon, in 2016, telling the crowd, “Donald Trump is not going to become president”:
Sanders has been slow to criticize his Democrat opponents but has upped his critiques of Trump in recent months, accusing him of suppressing votes, inspiring “violent extremists,” and “picking on minorities”:

Donald Trump can’t win an election based on his ideas so he has to suppress the vote to win.

Donald J. Trump
✔@realDonaldTrump
No debate on Election Security should go forward without first agreeing that Voter ID (Identification) must play a very strong part in any final agreement. Without Voter ID, it is all so meaningless!

28.3K people are talking about this

Donald Trump has fueled a climate which emboldens violent extremists and where immigrants live in constant fear. We are going to defeat him and his bigotry. 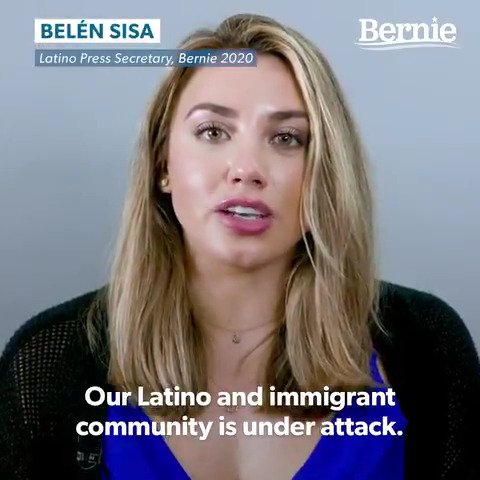 1,680 people are talking about this

Donald Trump is a racist and a liar, but he is not stupid. He thinks he can win re-election by picking on minorities.

This is not a moment to throw our hands up in despair. This is a moment to take on racism, sexism and homophobia and fight for the nation we know we must become. 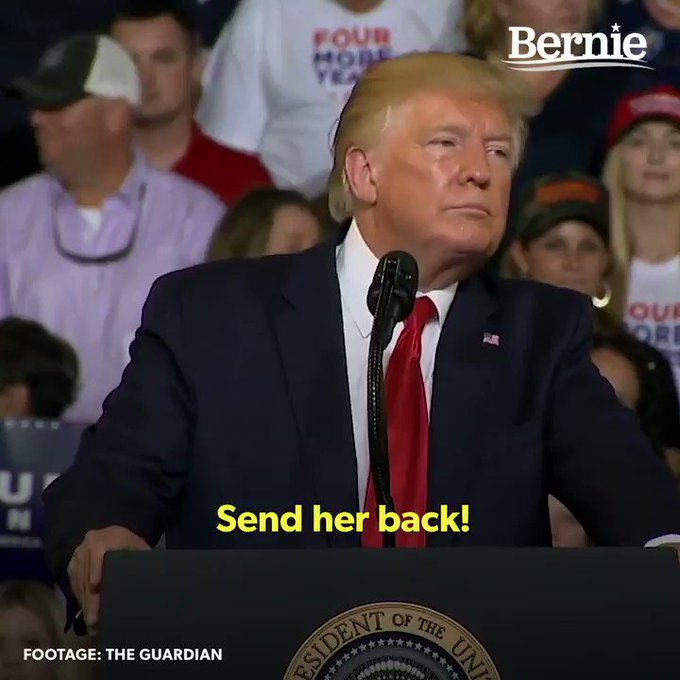 12K people are talking about this


He called the president an “idiot” last month for failing to embrace the progressive wing’s narrative on climate change:

271K people are talking about this

Posted by The Mexican Invasion & Occupation at 3:56 PM No comments: