HAS SABOTAGED OUR BORDERS TO EASE TENS OF MILLIONS OF ILLEGALS

INTO OUR JOBS, WELFARE OFFICES AND VOTING BOOTHS.

What is left for Legals is only the tax bills for La Raza's looting!

eating cheap food, these teens and pre-teens are increasingly forced into shoplifting, stealing,

selling drugs, joining a gang, or selling their bodies for money in a struggle to eat properly.


"More than 728,000 illegal immigrants have been shielded from being deported and granted work permits through President Barack Obama’s 2012 executive amnesty program, according to the Migration Policy Institute."

WASHINGTON, DC (September 12, 2016) — A new series of maps by the Center for Immigration Studies based on Census Bureau data shows detailed information on the nation's immigrant population (legal and illegal) at the county level in 1990, 2000, and 2014. The analysis focuses on adults because they have the most immediate impact. Adults directly affect the job market as workers, they impact politics as constituents and potential voters, and they begin to reshape the culture in receiving communities as soon as they arrive. 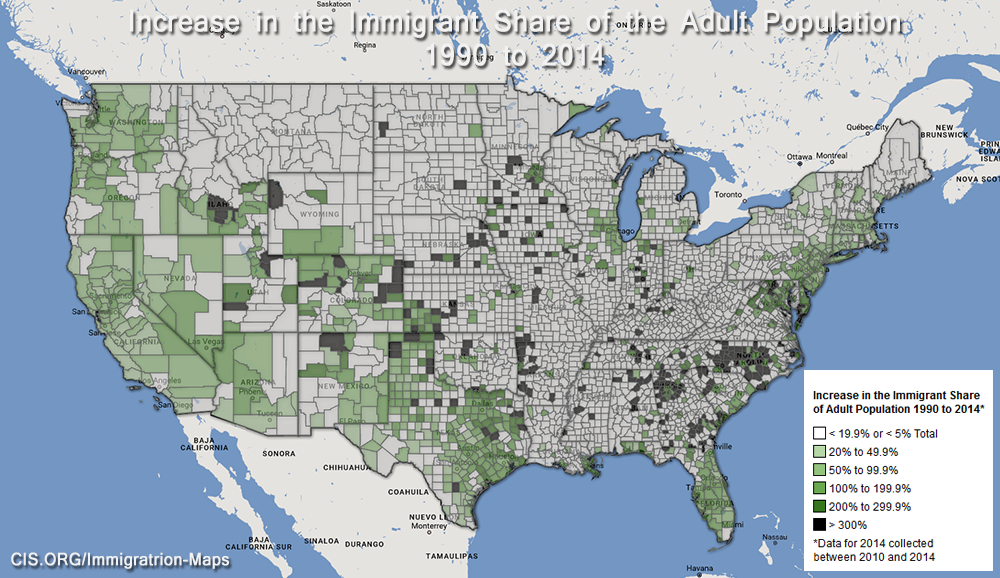 The data shows that growth in the adult immigrant population in some counties has been nothing short of astonishing, while in other areas it has grown little. The findings make clear that Washington may set immigration policy, but it is local communities that feel the impact.


Among the findings:
Methodological note: The data for this analysis comes from the 1990 and 2000 Census and 2010 to 2014 five-year file of the American Community Survey.  We refer to the five-year data as 2014 data, though it was collected by the Census Bureau from 2010 to 2014.  Also, our quadrupling figures exclude counties in which immigrants were less than 5 percent of the adult population in 2014.  So for example an increase from 1 percent to 4 percent is a quadrupling, but because the population is still under 5 percent in 2014 it is not including in our count of counties that increased 4 fold.


THE LA RAZA SUPREMACY DEMOCRAT PARTY HELL BENT ON OPEN BORDERS AND EXPANDING THE MEX WELFARE STATE ON OUR BACKS!


CLINTON’S PROMISE OF AMNESTY IN A 100 DAYS!

HILLARY CLINTON AND THE CONSPIRACY WITH THE MEXICAN FASCIST PARTY of LA RAZA “THE RACE” TO SURRENDER AMERICA’S BORDERS, DESTROY THE GOP WITH MILLIONS OF MEX VOTERS AND EXPAND THE MEX WELFARE STATE ON AMERICA’S BACKS
http://mexicanoccupation.blogspot.com/2016/08/la-raza-supremacist-hillary-clinton.html

AMERICA’S FINAL DAYS: The Global Looting of Bill & Hillary Clinton – unconvicted.
When asked to compare Hillary Clinton to Donald Trump, D'Souza said no contest.  "She is basically Obama plus gangsterism.  The Clintons are like Bonnie and Clyde.  Their goal is to steal America.
http://hillaryclinton-whitecollarcriminal.blogspot.com/2016/09/the-secret-life-of-hillary-clinton.html

In Hillary's America, D'Souza documents how Democrats transitioned from pro-slavery to pro-enslavement; the longstanding Democratic political war against women; how Hillary Clinton's political mentor was, literally, a cold-blooded gangster, Saul Alinsky; how the Clintons and other Democrats see foreign policy not in terms of national interest, but in terms of personal profit; and how Democratic-controlled cities have turned into hotbeds of crime and corruption.  American Thinker interviewed him about his latest projects

"The same period has seen a massive growth of social inequality, with income and wealth concentrated at the very top of American society to an extent not seen since the 1920s."

"He (Trump) is able to get a hearing because millions of people are being driven into economic insecurity and poverty while the rich and the super-rich continue to amass obscene levels of wealth. He is able with some success to divert mass discontent along reactionary nationalist and racialist channels precisely because what passes for the “left” in American politics, anchor  by the Democratic Party, has moved ever further to the right, culminating in the Obama administration which has presided over endless war and an unprecedented redistribution of wealth from the bottom to the top of the economic ladder."

OBAMA’S GIFT TO HILLARIA:
OPEN BORDERS AND A MILLION MEXICAN CRIMINAL LINING UP TO VOTE FOR MORE LA RAZA SUPREMACY!

Most Americans (legals) would be appalled to know that from day one the Obomb has funded the MEXICAN FASCIST PARTY of LA RAZA “The Race” with U.S. tax dollars and this racist party has operated out of the white house under LA RAZA V.P. Cecilia Munoz.

IMAGES OF AMERICA UNDER NARCOMEX OCCUPATION….

…. After the Clinton-Kaine and Speaker Paul Ryan’s AMNESTY and expanded open borders

FOR THE DEMOCRAT PARTY, MEXICO'S INVASION, OCCUPATION AND EVER EXPANDING WELFARE STATE KEEPS WAGES DEPRESSED, BUILD THE DEMS' LA RAZA PARTY BASE, AND DESTROYS THE GOP.

WE ARE SOON TO BE A ONE PARTY NATION WITH OPEN BORDERS FOR THE MEXICAN HORDES AS THEY JUMP OUR JOBS, WELFARE OFFICES AND VOTING BOOTHS WAVING THEIR MEXICAN FLAGS!

BARACK OBAMA AND THE LA RAZA

HSBC laundered hundreds of millions and perhaps billions of dollars for drug cartels responsible for the deaths of tens of thousands of people over the past two decades. The bank transferred at least $881 million of known drug trafficking proceeds, including money from the Sinaloa Cartel in

Mexico, which is known for dismembering its victims and publicly displaying their body parts.

OPEN BORDERS KEEPS WAGES FOR LEGALS DEPRESSED AND BUILDS THE LA RAZA SUPREMACY PARTY BASE FOR THE DEMOCRAT PARTY HELL BENT ON DESTROYING THE GOP WITH AN ENDLESS INVASION BY MEXICO!

CARLOS ESPARAZA IS AN ILLEGAL. HE JUMPED OUR BORDERS TO RAPE A 7 YEAR OLD AND TO VOTE FOR MEXICAN ENDORSED LA RAZA HILLARIA CLINTON.

DEPRESSED HUNDREDS OF BILLIONS PER YEAR, AND

BASE OF MEXICAN LOOTERS

…. We also get the tax bills for Mexico’s welfare state on our backs and the LA RAZA crime tidal wave that comes with them!

OBAMA-CLINTONOMICS: You were wondering how many jobs went to illegals and how well Obama’s crony banksters have done???

The sputtering economic recovering under President Obama, the last to follow a major recession, has fallen way short of the average recovery and ranks as the worst since the 1930s Great Depression, according to a new report.

Had the recovery under Obama been the average of the 11 since the Depression, according to the report, family incomes would be $17,000 higher, six million fewer Americans would be in poverty, and there would be six million more jobs.

http://hillaryclinton-whitecollarcriminal.blogspot.com/2016/08/obama-clintonomics-serving-super-rich.html
Posted by The Mexican Invasion & Occupation at 7:30 AM