JOE BIDEN UNDER DEMENTIA SAYS TRUMP IS A 'COLOSSAL' FAILURE - BUT WHO IN AMERICAN REMEMBERS ANYTHING BIDEN DID BUT SUCK OFF BRIBES?


Former Vice President Joe Biden on Thursday said the Trump administration’s coronavirus response has been a “colossal” failure.
“The administration’s failure on testing is colossal. And it’s a failure of planning, leadership and execution,” Biden said at a press conference addressing the deadly outbreak. “By next week, the number of tests should be in the millions, not the thousands.”
Biden said that the deadly illness revealed “severe shortcomings” of the Trump administration and accused the president of stoking fears nationwide. He also suggested that the president was racist in calling the illness a “foreign virus,” despite the fact that it originated from Wuhan, China.

Joe Biden: “We have to get to work immediately to dig ourselves out of this hole. And that’s why today, I am releasing a plan to combat and overcome the coronavirus” https://cbsn.ws/38QOQ8p 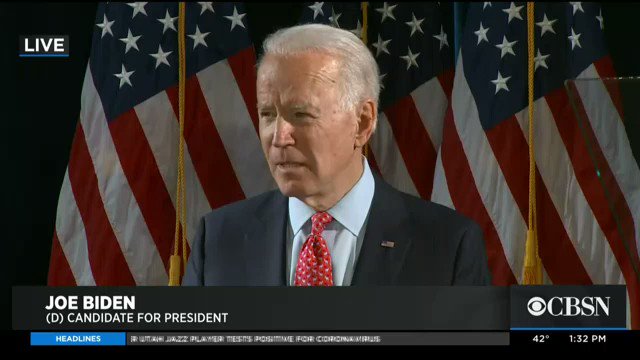 405 people are talking about this


“Neither should we panic or fallback on xenophobia,” he stated. “Labeling COVID-19 a ‘foreign virus’ does not displace accountability for the misjudgments that have been taken thus far by the Trump administration. Let me be crystal clear: the coronavirus does not have a political affiliation.”
Biden’s speech came one day after his campaign unveiled that it plans to create a “Public Health Advisory Committee” to provide guidance on how to combat the virus. The Democrat frontrunner is also shifting to  “virtual” campaign rally events in Florida and Illinois over fears stemming from the outbreak. Biden and Sen. Bernie Sanders (I-VT) both canceled their Tuesday evening rallies in Cleveland, Ohio, due to the outbreak.
President Trump delivered an Oval Office address to the nation about his administration’s efforts to combat the spread of the coronavirus. The president announced that the United States would bar travel from European countries for 30 days beginning at midnight on Friday.
“After consulting with our top government health professionals, I have decided to take several strong but necessary actions to protect the health and wellbeing of all Americans,” he stated. “These prohibitions will not only apply to the tremendous amount of trade and cargo but various other things as we get approval. Anything coming from Europe to the United States is what we are discussing.”
Trump said he is also instructing the Small Business Administration to provide low-interest loans to small businesses affected by the coronavirus and asking Congress to increase funding for this program by $50 million and provide Americans with immediate payroll tax relief.
The briefing came after the U.S. Centers for Disease Control and Prevention announced 31 Americans have died from the COVID-19 outbreak and more than 1,000 have been sickened.
Trump warned that the highest risk remains among the elderly population with underlying health conditions and strongly advised nursing homes for the elderly to suspend all medically unnecessary visits and encouraged older people to avoid unnecessary travel.
“Smart action today will prevent the spread of the virus tomorrow,” Trump said.
The UPI contributed to this report.

Posted by The Mexican Invasion & Occupation at 2:00 PM No comments: