Twenty-two members of the violent El Salvadorian MS-13 Gang in Los Angeles, California have been charged with a string of gruesome murders, often involving members allegedly hacking their victims to death with machetes.

On Tuesday, 22 MS-13 Gang members in the Los Angeles area were charged with murdering seven individuals over the last two years, the U.S. Attorney’s Office announced. The murders, prosecutors say, usually involved MS-13 Gang members brutally murdering their victims using machetes and other “medieval-style” tactics.
For example, the indictment states that in one murder, six of the MS-13 Gang members charged kidnapped, choked, and attacked a rival gang member with a machete. The victim had his body parts dismembered and thrown into a canyon. One MS-13 Gang member used his machete to cut the victims’ heart out of his chest. 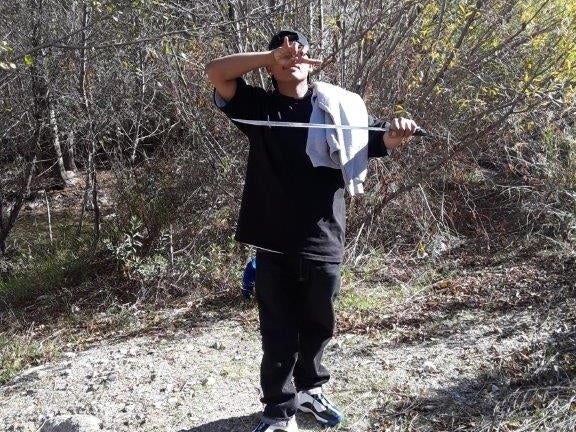 MS-13 Gang member Fernando Garcia Parada poses for a photo wielding a machete and throwing a gang sign in January 2018. (Department of Justice)
The investigation primarily focused on the Fulton clique, operating in the San Fernando Valley, of the Los Angeles-based MS-13 Gang. Thanks to growing levels of illegal immigration at the U.S.-Mexico border, prosecutors say the clique was gifted with a steady stream of vulnerable, young Central American boys who were eager to become members of the gang. Their initiation to join MS-13 is to murder an individual who is “perceived to be adverse” to the gang.
In other alleged murders detailed in the 78-page indictment, a group of MS-13 Gang members hacked a victim to death with knives and a machete on June 4, 2017. A few months prior, another group of MS-13 Gang members allegedly hacked a victim to death with a machete in the Angeles National Forest.
“Taking violent offenders off the street should send a message to MS-13 members and their associates that medieval-style violence and senseless murder will not be tolerated in Los Angeles,” Paul Delacourt of the FBI Los Angeles office said in a statement. “Working with our local partners, we expect to impact MS-13’s influence in gang-occupied communities.”
The MS-13 Gang, originally from El Salvador, is primarily made up of illegal aliens, Unaccompanied Alien Children (UACs), and newly arrived immigrants living in the U.S. Today, the gang operates largely in Los Angeles, New York, Virginia, and Washington, D.C., but conducts gang activities and drug distribution across at least 40 states, and has at least 10,000 members in the country.
Investigations by the Justice Department have revealed that MS-13 Gang leaders in El Salvador have sent recruits and members to the U.S. illegally, often posing as UACs, to help strengthen ranks within the gang.
John Binder is a reporter for Breitbart News. Follow him on Twitter at @JxhnBinder. 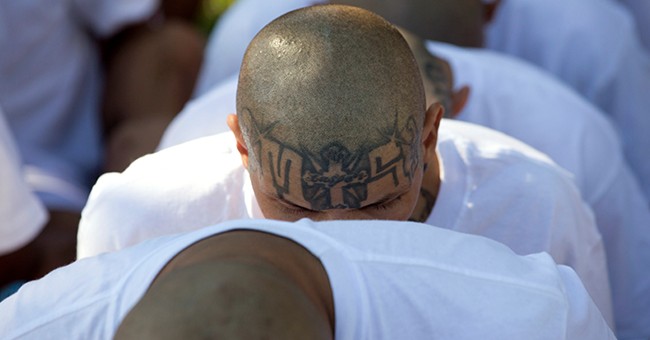 The Department of Homeland Security has released its report on quarterly numbers of ICE detainers that were issued and ignored by California sanctuary cities between January 1 and March 31 of last year. Detainers are requests made by ICE and ask local law enforcement to hold violent criminal aliens until they can be properly transferred to federal custody. Hundreds were ignored, releasing dangerous individuals onto American streets.
"The report will highlight cases where ICE issued a detainer, the detainer was declined, and the alien subsequently committed a crime after being released from state or local custody. Because ICE is often not alerted by uncooperative jurisdictions when a detainer has been declined, and because ICE may only learn of the detainer having been declined after an alien is arrested for a subsequent offense, the cases contained in this report are examples of a broader public safety issue and are not exhaustive," the report summary states.
"Cooperation between ICE and state and local law enforcement agencies is critical to the effort to identify and arrest removable aliens and defend the nation’s security," it continues. "Every day, ICE places detainers on individuals who the agency has probable cause to believe are aliens who are removable from the United States and are currently in federal, state, and local law enforcement agency custody."
Many of the criminal aliens who were released went on to commit additional felony crimes like driving under the influence, domestic violence, armed robbery, assault with a deadly weapon and more.
Here are a few examples:

Meanwhile, Democrats in Congress continue to call for the elimination of ICE.
Katie Pavlich's Latest Books, Assault and Flattery: The Truth About the Left and Their War on Womenand Fast and Furious: Barack Obama's Bloodiest Scandal and the Shameless Cover-Up are available on Amazon
Posted by The Mexican Invasion & Occupation at 4:41 PM No comments: Links to this post

NANCY PELOSI VOWS TO DESTROY TRUMP, THE TWO PARTY SYSTEM, SERVE BANKSTERS AND BILLIONAIRES WITH WIDER OPEN BORDERS... and get richer doing it!

President Donald Trump took to Twitter Sunday evening to slam the far-left Democrats who have come to the defense of those who “speak so badly of our country.”

In one of his shared tweets, Trump claimed far-left Democrats defend those who “hate Israel with a true and unbridled passion.”
“So sad to see the Democrats sticking up for people who speak so badly of our Country and who, in addition, hate Israel with a true and unbridled passion,” Trump wrote. “Whenever confronted, they call their adversaries, including Nancy Pelosi, ‘RACIST.'”
“Their disgusting language and the many terrible things they say about the United States must not be allowed to go unchallenged,” Trump continued.
Trump then insisted that he and his campaign “look even more forward” to facing off against Democrats at the ballot box in 2020 should the Democrat Party continue to “condone such disgraceful behavior.”
“If the Democrat Party wants to continue to condone such disgraceful behavior, then we look even more forward to seeing you at the ballot box in 2020,” Trump added.
Trump drew immense criticism from the Democrat Party, including nearly every 2020 Democrat presidential hopeful, Sunday after he suggested left-wing members of Congress “go back and help fix the totally broken and crime infested places from which they came.”
After his tweets, Rep. Ilhan Omar (D-MN) claimed Trump is “stoking white nationalism.”
“You are stoking white nationalism because you are angry that people like us are serving in Congress and fighting against your hate-filled agenda,” Omar, who came to America as a refugee, wrote in a tweet.
Follow Kyle on Twitter @RealKyleMorris and Facebook.

Speaker of the House Nancy Pelosi (D-CA) was found to have broken the rules of the U.S. House of Representatives by calling President Donald Trump “racist” on the floor Tuesday, but Democrats voted to keep her remarks in the record and restore her speaking privileges.

Pelosi had delivered a statement calling the president racist as a prelude to voting on a House resolution to that effect. Rep. Chris Collins (R-GA) raised a point of order, objecting that Pelosi’s statement was a violation of House rules.
It transpired that Collins was correct: 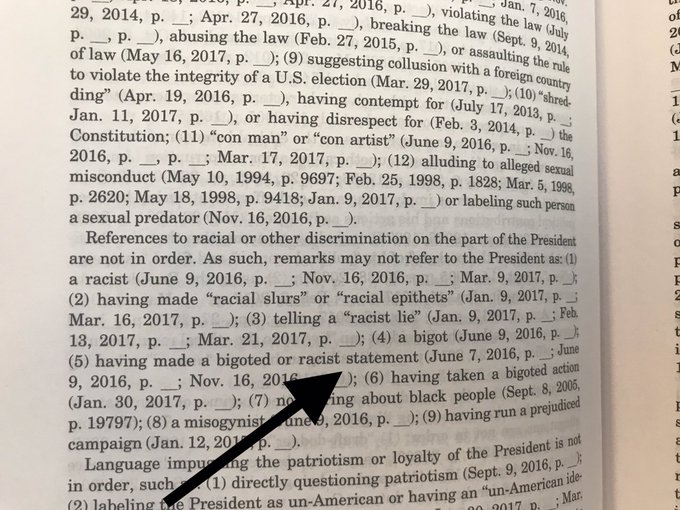 Regardless of the content of Trump’s racist statement, Democrats are going to have a hard time not taking down Pelosi’s words.

Jefferson’s Manual literally says you can’t refer to a statement by the President as racist on the House floor.

On the kerfuffle on the flr involving Pelosi...When words are taken down, the member accused of using inappropriate language must be seated in the House chamber and wait for the ruling

101 people are talking about this

Well this is unprecedented. Rep. Emanuel cleaver abandoned the chair as he was presiding over the chamber.

162 people are talking about this

Replying to @JakeSherman
Now Hoyer is in the chair, noting that @SpeakerPelosi’s words were out of order.

The house is voting to take down pelosis words. This vote is likely to be party line, and likely to fail.

97 people are talking about this

BREAKING NEWS —> Speaker Pelosi just broke the rules of the House, and is no longer permitted to speak on the floor of the House for the rest of the day.

15.7K people are talking about this


Democrats, in a party-line vote, ensured that Pelosi’s words would not be taken down, and that she would not, as required, lose her speaking privileges for the day because she left the chamber during the debate on her violation.
The vote on the resolution will proceed anyway.
Earlier this year, Pelosi and the Democrats passed a resolution on antisemitism that failed to condemn anti-Jewish hatred specifically, or Rep. Ilhan Omar (D-MN) directly.
Joel B. Pollak is Senior Editor-at-Large at Breitbart News. He earned an A.B. in Social Studies and Environmental Science and Public Policy from Harvard. He is a winner of the 2018 Robert Novak Journalism Alumni Fellowship. He is also the co-author of How Trump Won: The Inside Story of a Revolution, which is available from Regnery. Follow him on Twitter at @joelpollak.


Posted by The Mexican Invasion & Occupation at 4:35 PM No comments: Links to this post