THE CASE AGAINST GLOBALISM - WHY ARE ARE BILLIONAIRES GLOBALIST DEMOCRATS FOR WIDER OPEN BORDERS AND ENDLESS HORDES OF INVADING "CHEAP" LABOR ILLEGALS???

Faith Goldy
A+
|
a-
With mandatory quarantine blanketing the majority of the globe, people everywhere are wondering: Are things ever going to go back to normal? The consensus seems to be: Probably not, at least not any time soon.
Top scientists say normal life won’t resume until 2021, most politicians keep extending their lockdown timelines, tens of millions find themselves without work, and commentators predict the WuFlu will usher in an entirely new post-coronavirus world order. So, what will the new New World Order look like?  There seem to be two competing desires in that department as COVID-19 has brought about an international, inter-sector, showdown between Globalism and Nationalism.
Were Reason alone our predictor, Team Nationalist would have this in the bag.
Coronavirus is a story all about borders. At the root of this pandemic is a tale about the evils of open borders, diversity, globalism, immigration, and the fragility of economic interconnectivity.
To be sure: Immigration patriots have been vindicated at every turn of this crisis:
Sure, Joe Sixpack is getting redpilled about the fact Team Nationalist was right all along while he’s in his sequestered state— it was common sense to suspend flights, close the borders, and to make and keep supplies at home as soon as the KungFlu started making headlines—but do more ‘woke’ citizens mean a ‘w’ for Team Nationalism or are we simply being corralled into the next phase of globalism, despite rising consciousness about that system’s flaws? Many dissidents on the right are optimistic; however, I share John Derbyshire’s doubts.
Even under pressure of the current crisis and the realization that open borders and free markets have failed us, “[The American] government is still cheerfully bringing in tens of thousands of guest workers from abroad, even as the numbers of unemployed Americans rises through the stratosphere.” When pressed about the move, President Trump during a press conference literally said that without foreign guest workers coming in to do agricultural work, “We’re not going to have farms.”  Someone should remind the President that H-2A foreign visa workers make up only about 10% of the US crop farm workforce.  And with exponential American joblessness, how are demands to suspend programs like H1-B visas not being implemented if Nationalists are on the winning side of this thing.
Simply put: It’s because we’re not winning. The Globalists are.
Yes, we had a glimmer of hope for a few hours when President Trump announced an Immigration Moratorium Executive Order via Twitter—all of which was completely undone once Trump became a puppet to enemies to the America First crowd, planted within his White House.
Immigration moratorium EO? More like symbolic gesture BS. Rather than focusing on temporary foreign workers visas, which take good paying jobs away from Americans—you know, some 26 million of whom are unemployed at the moment—all Trump did was put a 60 day pause on new green cards… Something that was already de facto being done since the State Department has stopped processing visa applications due to virus hysteria weeks ago!
As Michelle Malkin put it: “It's all moratorium hat and no cattle”

Whatever the media and Dems tell you over the next week, remember this:

An Ipsos poll released this month found that 8 in 10 Americans want a full halt on immigration to the U.S. https://www.breitbart.com/politics/2020/04/13/ipsos-poll-nearly-8-in-10-americans-want-immigration-moratorium-for-u-s/ …

Almost 8-in-10 Americans want immigration to the United States paused during the Chinese coronavirus crisis, a poll reveals.
breitbart.com

573 people are talking about this


All this, despite the fact a whopping 79% of Americans are now in favor of a full halt to immigration!
That’s because Team Globalist is in control: They’re using the pandemic to bend the law and usher in an era of Anarcho-Tyranny in America, and across the globe. “Thanks to the Chinese Virus, you can be arrested for leaving your home or travelling for “non-essential purposes. Failure to “social distance” can mean jail-time as well. Yet the same politicians and judges who propose and enforce such measures have freed thousands of criminals from jails.”
Meantime, there are reports that Deep State saboteurs in ICE SVU are executing a mass jailbreak for illegal aliens in custody, as “more than 160 have already been released by ICE in an effort to curb the spread of coronavirus in detention facilities.”
And as convicted criminals are released with nowhere to go, law abiding Americans wonder if and when they’ll ever be freed from house arrest. Not until there are “no new cases,” “no new deaths,” or a Gates-approved vaccine emerges, according to public health autocrat Anthony Fauci.
And the tyranny isn’t just medical but technological as well, with Google releasing location data—to the government and public—so to monitor whether or not we’re following social distancing rules.
Meantime, with the US only months away from the Presidential election, Americans are completely unsure of how procedurally they will cast their ballots, as primaries have already suspended in-person voting over the Chinese virus.
How will Americans—now 1 in 10 of whom are unemployed—view their President come November? The Globalists have had his back against a wall this whole time: When he refused to shut down the economy, they blamed him for every death; now that he has responded aggressively, the economy is being thrust into a recession as his Presidency hangs on the decision of when to reopen America.
So, what should Trump do? What he was elected to do in the first place: Wave the flags of economic nationalism and immigration patriotism for the sake of America’s founding stock!  Stop throwing trillions at the pandemic (which will invariably end up in the pockets of Wall Street) and let Main St get back to work before unemployment kills more of America the disease itself. 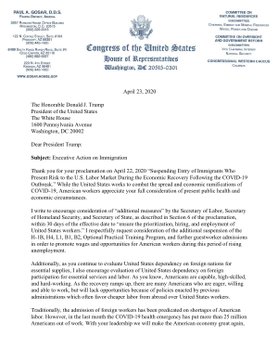 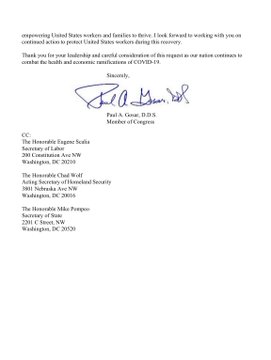 550 people are talking about this


And for heaven’s sake: Use the 30-day window afforded in section 6 of his own EO, to expand the immigration moratorium to something meaningful. Include a suspension of additional guest worker visas and programs that undercut the American workforce, visas like the H-1B, H4, B1, and B2 to name a few. Ensure American Workers are first in line to return to work by bringing on a Second Phase EO concerning Guest Worker Visas!
The America First movement has been right throughout this pandemic, and 8 in 10 Americans now share their goal of an immigration moratorium. There could never be a more perfect time for implementing an immigration restrictionist agenda. Meantime, thinking more immigration will help America’s stratospheric unemployment levels is dumber than thinking people won’t riot when they haven’t any food, even as their immigrant over-class feeds on the carcass of what was once America the Beautiful.
Faith Goldy [Email her | Tweet her] is a Christian Canadian Nationalist independent commentator and investigative journalist. Goldy hosts ‘The National Question’ on VDARE TV.   Goldy's media career has included work with: Toronto Sun, Sun News Network, National Post, Rebel News, The Blaze, Laura Ingraham Radio Show, Chorus Radio’s AM 640, Bell Media’s Newstalk 1010, Vision TV, Zoomer Radio, and The Catholic Register. Goldy's videos are featured regularly on her YouTube channel and right here at vdare.com.
Posted by The Mexican Invasion & Occupation at 4:42 PM No comments:

HILLARY CLINTON ENABLING A SEXUAL PREDATOR BY ENDORSE JOE THE GROPER BIDEN - WHO KNOWS MORE ABOUT PREDATOR THAN ONE MARRIED TO SERIAL RAPIST BILLARY CLINTON? - "Everyone knows she stood by her man, blamed his women, and perhaps was a psychological co-rapist for the sake of her political ambitions." DEBORAH C TYLER

Author Tara Reade condemned former Secretary of State Hillary Clinton’s endorsement of Joe Biden for president, even as the former Vice President has remained silent about her accusation of sexual assault in 1993.
“I voted for Hillary Clinton in 2016. I voted for her in the primary. I’m a lifelong Democrat. But yet, what I see now is someone enabling a sexual predator and it was my former boss, Joe Biden, who raped me,” Reade said in a statement to Fox News. “Hillary Clinton has a history of enabling powerful men to cover up their sexual predatory behaviors and their inappropriate sexual misconduct. We don’t need that for this country. We don’t need that for our new generation coming up that wants institutional rape culture to change.”
“I will not be smeared, dismissed, or ignored. I stand in truth and I will keep speaking out,” she added.
Reade alleges that Biden assaulted her while the two were in the basement of a Capitol Hill building in 1993.
“He was whispering to me and trying to kiss me at the same time, and he was saying, ‘Do you want to go somewhere else?’” Reade recalled in a recent interview with the Associated Press. “I remember wanting to say stop, but I don’t know if I said it out loud or if I just thought it. I was kind of frozen up.”
Reade said she moved away from Biden, who responded surprisingly: “come on, man, I heard you liked me.”
The Biden campaign has denied the allegation, though the former vice president himself has yet to address the matter.
Earlier Tuesday, Clinton endorsed Biden’s White House run in a virtual town hall event together.
“I am thrilled to be part of your campaign to not only endorse you but to help highlight a lot of the issues that are at stake in this presidential election,” Clinton said. “I want to add my voice to the many who have endorsed you to be our president. Just think of the difference it would make right now if we had a president who not only listened to the science, put facts over fiction, but brought us together.”
Clinton also did not address Reade’s allegations during the live stream. Her husband, former President Bill Clinton, has faced multiple allegations of sexual assault and infamously engaged in an affair with then-White House intern, Monica Lewinsky.
In a Monday interview with Business Insider, Lynda LaCasse, a former neighbor to Reade, said the two discussed her alleged allegation against Biden between 1995 and 1996.
“I remember her saying, here was this person that she was working for and she idolized him,” LaCasse told the news outlet. “And he kind of put her up against a wall. And he put his hand up her skirt and he put his fingers inside her. She felt like she was assaulted, and she really didn’t feel there was anything she could do.”
“She was crying,” LaCasse continued. “She was upset. And the more she talked about it, the more she started crying. I remember saying that she needed to file a police report.”
“I don’t remember all the details,” she added. “I remember the skirt. I remember the fingers. I remember she was devastated.”

Posted by The Mexican Invasion & Occupation at 3:39 PM No comments: