The episode was capped by a confrontation on Wednesday in which the suspect fled from officers to the roof of his apartment complex, police said.
On Sunday, Redwood City police received reports that a man had been seen throwing a small dog repeatedly to the ground near Avocet Drive in Redwood Shores, a waterfront community near Bair Island.
Nearby surveillance videos captured the incident, and authorities released photos to social media to help identify the suspect. The dog appeared to be small and reddish-brown.
Thousands of tips poured in, allowing police to put out an arrest warrant for East Palo Alto resident Michael Fore, 30, on felony animal cruelty charges.
When East Palo Alto and Redwood City police attempted to arrest Fore at his home on Wednesday, he ran out to the balcony of his third-floor apartment, police said, and fled to the roof of the building.
Officers met Fore on the roof and arrested him; he was booked into San Mateo County Jail on felony animal cruelty charges.
The dog shows no signs of lasting injuries, police said, and was safely returned to its owner, who was not aware of the incident. It is not immediately clear whether Fore and the owner knew each other.
Anyone with additional information is asked to contact Detective Sergeant Russ Felker at 650-780-7627.


The House of Representatives unanimously passed a bill Tuesday that would make certain types of animal cruelty a federal felony.

The Preventing Animal Cruelty and Torture (PACT) Act bans extremely abusive acts of animal abuse, such as crushing, and continues the criminalization of making and distributing animal crush videos.
“This bill sends a clear message that our society does not accept cruelty against animals,” said Democrat Rep. Ted Deutch of Florida, who introduced the legislation with Republican Rep. Vern Buchanan, also of Florida.
“We’ve received support from so many Americans from across the country and across the political spectrum,” Deutch said, reported ABC News. “I’m deeply thankful for all of the advocates who helped us pass this bill, and I look forward to the Senate’s swift passage and the President’s signature.”

The U.S. House just passed the #PACT Act, legislation that I introduced with my colleague @RepTedDeutch to criminalize animal abuse. This important piece of legislation would make animal cruelty a federal offense. Great news for my fellow animal lovers! 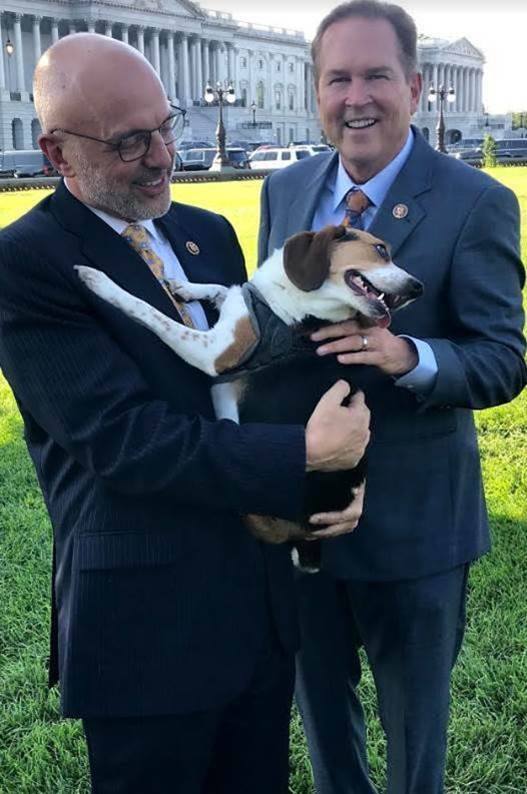 
“The torture of innocent animals is abhorrent and should be punished to the fullest extent of the law,” Buchanan said as well. “Passing the PACT Act sends a strong message that this behavior will not be tolerated.
The bill expands upon the 2010 Animal Crush Video Prohibition Act, which initially criminalized the creation and distribution of animal crush videos.
The PACT Act would make it a federal crime for “any person to purposely engage in animal crushing in or affecting interstate or foreign commerce or within the special maritime and territorial jurisdiction of the United States.”
The legislation continues:

Violators would be subject to criminal penalties, including a fine, a prison term of up to seven years, or both.
The measure provides exceptions for unintentional killing of an animal as well as conduct or videos of “customary and normal veterinary, agricultural husbandry, or other animal management practice,” “the slaughter of animals for food,” and other practices such as hunting, trapping, fishing, predator or pest control, scientific research, protecting a person’s life or property, and euthanizing an animal.
In response to the legislation, pro-life organization March for Life Action tweeted the bill is “good news for animal lovers” and asked House Speaker Nancy Pelosi (D-CA) to “show the same respect and offer protections for unborn humans and those born alive after an abortion.”

This is good news for animal lovers @SpeakerPelosi

Can you show the same respect and offer protections for unborn humans and those born alive after an abortion? #LetThemVote #Endinfanticidehttps://www.informnny.com/news/u-s-house-passes-bill-making-animal-cruelty-a-federal-felony/ …


House Republicans held a hearing in September on the Born-Alive Abortion Survivors Protection Act, legislation that seeks to protect babies born alive after abortion from infanticide.
House Democrats have refused to take up the measure, H.R. 962, which states infants who survive abortion deserve the same treatment and care as any other newborn.
Pelosi and other Democrat leaders have blocked a vote on the bill more than 80 times.

70% of Dems agree: if a baby is born alive during an abortion attempt, they should be given medical care. @RepHaleyStevens, as a #ProLife Michigander, I call on you to sign the discharge petition to allow a vote on the Born Alive bill to #EndInfanticide!


House Republican Whip Steve Scalise (LA) and Rep. Ann Wagner (R-MO) filed a discharge petition on the legislation in April that requires more Democrat signatures in order to bypass Pelosi and force a vote on the Born-Alive Act.
Posted by The Mexican Invasion & Occupation at 12:30 PM No comments:

MORE DIRTY DEALS FROM THE DIRTIEST: BIDEN, THE OBOMB AND PAY-TO-PLAY HILLARY CLINTON - "A “Saudi tycoon,” Sheikh Mohammed Al Rahbani, routed hundreds of thousands of dollars for the Obama inaugural through an “intermediary,” Imaad Zuberi."

Since his election to the presidency in 2016, the Democrat-Deep State-Media axis has targeted Donald Trump for foreign entanglements they claim should remove him from office. Now comes news of foreign entanglements and foreign cash for the previous president.
“Middleman helped Saudi give to Obama inaugural,” proclaims the headline on the October 29 report by Alan Suderman and Jim Mustian, billed as an Associated Press exclusive. As the authors explain, U.S. election law prohibits foreign nationals from making contributions to the inaugural celebrations of American presidents. As it turns out, the law was violated.
A “Saudi tycoon,” Sheikh Mohammed Al Rahbani, routed hundreds of thousands of dollars for the Obama inaugural through an “intermediary,”  Imaad Zuberi. He, in turn, is a “jet-setting fundraiser and venture capitalist,” who has “raised millions of dollars for Democrats and Republicans alike over the years.” Despite the appearance of bipartisanship, Zuberi is more narrowly tailored.
Imaad Zuberi “served as a top fundraiser for both Obama and Hillary Clinton during their presidential runs, including stints on both of their campaign finance committees.” One campaign, not identified, took donations “in the name of one of Zuberi’s dead relatives” and a political committee, also unidentified, “took donations from a person Zuberi invented.” As the DOJ charged, Zuberi pleaded guilty to “falsifying records to conceal his work as a foreign agent while lobbying high-level U.S. government officials,” and it was hardly his first brush with the law.
“Elite Fundraiser for Obama and Clinton Linked to Justice Department Probe,” read the headline on Bill Allison’s August 28, 2015 exclusive in Foreign Policy. The calling card of the elite political fundraiser are photographs, “bumping fists with President Barack Obama in front of a Christmas tree at a White House reception. Sharing a belly laugh with Vice President Joe Biden at a formal luncheon,” and posing “cheek to cheek with Democratic presidential candidate Hillary Clinton.”
Not only is Zuberi a major fundraiser for her campaign, notes Allison, “he also donated between $250,000 and $500,000 to the Clinton Foundation, which has already come under fire for accepting money from donors — many of them foreign — with interests before the U.S. government while she was secretary of state.” And as Allison learned, Hillary’s 2008 campaign benefitted from “straw donors” set up by Sant Singh Chatwal and Norman Hsu, both convicted of election law violations.
Zuberi also used straw donors in more recent illegal activity. As to the affiliation of those mysterious campaigns and committees, the AP writers provide a hint.
Sheikh Mohammed Al Rahbani has “talked about his support of Obama. He posted pictures on his website of himself and his wife standing with Obama, former Vice President Joe Biden and their spouses at a 2013 inaugural event.” Alas, “the website was taken down shortly after Zuberi’s plea was made public.”
As Paul Delacourt of the FBI’s Los Angeles office explains, “American influence is not for sale.” Mr. Zuberi “lured individuals who were seeking political influence in violation of U.S. law, and in the process, enriched himself by defrauding those with whom he interacted.” According to the DOJ, that “could send him to prison for a lengthy period of time.”
According to Suderman and Mustian, “Zuberi’s case raises questions about the degree to which political committees vet donors.” And as FEC boss Ellen Weintraub told the writers,  “I’m deeply concerned about foreigners trying to intervene in our elections, and I don’t think we’re doing enough to try to stop it.” They might start by looking in the right place.
Unconventional candidate Donald Trump, a man of considerable means, financed his own campaign. Trump had no need to consort with the likes of Zuberi or his dead relatives and those he invents. And because Trump financed his own campaign, he owes nothing to anybody, foreign or domestic.
Adam “sack of” Schiff, as Judge Jeanine Pirro respectfully calls him, claimed he had evidence in plain sight that Trump colluded with Russia to steal the election from Hillary Clinton. Two years and a Mueller investigation later, such evidence is nowhere in sight. Schiff’s current inquisition, perhaps more bogus than the Mueller probe, is best seen a diversion from John Durham’s criminal investigation of those who launched the Russia hoax. That is where DOJ and election officials should be looking.
Did Clinton Foundation donor Imaad Zerubi turn up on any of those 30,000 subpoenaed emails Hillary Clinton deleted? Did Zerubi see any classified material? Were there any texts from Zerubi and his foreign clients on the cell phones Hillary’s squad smashed up with hammers? Was Clinton grossly negligent, or just extremely careless? And so on. Meanwhile, Hillary Clinton also enjoyed other foreign intervention, right out in the open.
Mexican foreign minister Marcelo Ebrard, a former mayor of Mexico City, had worked with voter-registration and participation groups in California, Arizona, Florida, Chicago, and elsewhere. As Ebrard told Francisco Goldman of the New Yorker, in 2016 he “decided to get more involved” by working on get-out-the-vote campaigns on behalf of Hillary Clinton.
A powerful foreign national openly interferes in an American election, and nobody calls him on it. Now that Clinton Foundation lackey Imaad Zuberi has copped a plea, the FEC and DOJ should look into it.


Congress overrides Obama veto of bill allowing 9/11 lawsuits
By Tom Carter
On Wednesday, the US Congress overturned President Obama’s veto of legislation that would permit victims of the September 11, 2001 attacks and their families to sue Saudi Arabia. Declassified documents released this year confirm the involvement of Saudi intelligence agents in the funding, organization, and planning of the attacks—facts which were covered up for years by the Bush and Obama administrations.

Posted by The Mexican Invasion & Occupation at 11:59 AM No comments: