now watch the globalist billionaires and their criminal banksters come out just fine after the next "recession". 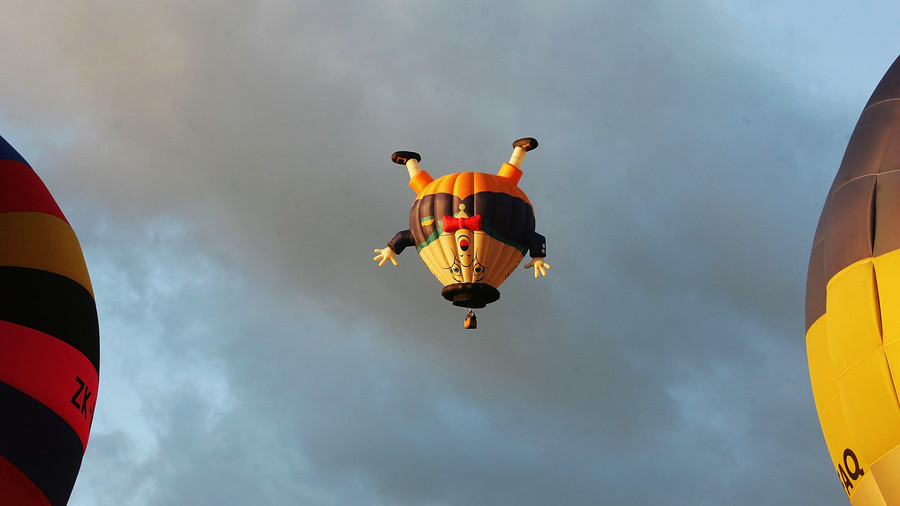 Getty Images/Marty Melville
Wall Street and the US economy are on the verge of recession, according to the CEO of Euro Pacific Capital, Peter Schiff, who has raised alarms after this week’s market selloff.
“This is a bubble not just in the stock market, but the entire economy,” he told Fox News. Schiff predicts a recession, accompanied by rising consumer prices, that will be “far more painful” than the 2007-2009 Great Recession.
Read more 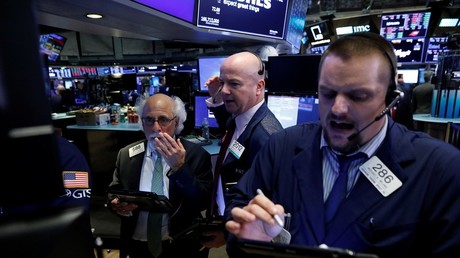 US stocks suffer worst loss in 8 months amid rising interest rates, tech hit hardest
“I think as Americans lose their jobs, they are going to see the cost of living going up rather dramatically, and so this is going to make it particularly painful,” he said.
Stock markets sank on Wednesday and Thursday, led by a steep decline in tech shares and worries of rapidly rising rates which made investors flee the risky stocks.
Both the Dow Jones Industrial Average and S&P 500 posted their biggest one-day drops since February. The Nasdaq notched its largest single day sell-off since June 2016.
US President Donald Trump has blamed the central bank for the selloff, saying the Federal Reserve “has gone crazy.”
According to Schiff, the Fed has been acting irrationally for a long time: “What is crazy is for the Fed to believe that they can raise interest rates without pricking their own bubble.”
READ MORE: Decade after financial crisis JPMorgan predicts next one’s coming soon
Schiff added: “All bear markets start off as corrections. I think this one is probably a bear market. It’s long overdue. This is a bigger bubble than the one that blew up in 2008, and the crisis that is going to ensue is going to be far larger.”
THE OBAMA – CLINTON – GLOBALIST CONSPIRACY: Finish off the middle-class and build a “cheap” labor Mex servant class.
https://mexicanoccupation.blogspot.com/2018/10/barack-obama-and-hillary-clintons.html
“Our entire crony capitalist system, Democrat and Republican alike, has become a kleptocracy approaching par with third-world hell-holes.  This is the way a great country is raided by its elite.” ---- Karen McQuillan  THEAMERICAN THINKER.com

Obama Is Making You Poorer—But Who’s Getting Rich?

NEW YORK — In the midst of a public relations nightmare, former White House Deputy National Security Adviser Dina Habib Powell took charge of Goldman Sachs’s global charitable foundation, helping to resurrect the big bank’s shattered image after it was implicated in practices that contributed to the financial crisis of 2007-2008.

1.     Globalism: Google VP Kent Walker insists that despite its repeated rejection by electorates around the world, “globalization” is an “incredible force for good.”
2.     Hillary Clinton’s Democratic party: An executive nearly broke down cryingbecause of the candidate’s loss. Not a single executive expressed anything but dismay at her defeat.
3.     Immigration: Maintaining liberal immigration in the U.S is the policy that Google’s executives discussed the most.

GLOBALIST FOR BANKSTERS AND THE SUPER RICH and OPEN BORDERS TO FINISH OFF THE AMERICAN MIDDLE-CLASS.

GLOBALISTS’ BILLIONAIRES’ DICTATORSHIP FOR THE RICH

THE INVITED INVADING HORDES: IT’S ALL ABOUT KEEPING WAGES DEPRESSED!
"In the decade following the financial crisis of 2007-2008, the capitalist class has delivered powerful blows to the social position of the working class. As a result, the working class in the US, the world’s “richest country,” faces levels of economic hardship not seen since the 1930s."
http://mexicanoccupation.blogspot.com/2018/07/the-class-war-over-paying-living-wages.html
"Inequality has reached unprecedented levels: the wealth of America’s three richest people now equals the net worth of the poorest half of the US population."

Another financial earthquake in the making


U.S. homebuilding dropped more than expected in September and mortgage application volume for last week came 15 percent lower than a year ago, adding credence to President Donald Trump’s complaints that the Federal Reserve is raising interest rates too rapidly.

“My biggest threat is the Fed. Because the Fed is raising rates too fast. And it’s independent, so I don’t speak to them. But I’m not happy with what he’s [Powell’s] doing. Because it’s going too fast,” Trump said in an interview Tuesday with Trish Regan of the Fox Business Network.
Housing market data released Wednesday appear to support the president’s view that the Fed’s rate hikes are slamming the breaks in some areas of the economy. Refinancing applications, the most interest-rate-sensitive type of mortgage, fell 9 percent for the week. These are now 33.5 percent lower than a year ago. The average rate for 30-year fixed-rate mortgages climbed to 5.10 percent, up from 5.05 percent a week earlier. That is the highest rate since 2011.
“The numbers are tepid enough that you need to wait,” CNBC’s Jim Cramer said Wednesday morning. “If you are on the Fed and you are a rigorous thinker and you’re not anecdotal, you’d say, ‘Okay. Maybe we can do December. Maybe we shouldn’t [do more].”
The Fed is widely expected to hike its interest rate target by a quarter of a percentage point in December.
Cramer said he thought the president was “bashing the Fed unfairly” but addded that the Fed was “putting its head in the sand” by continuing to move rates upward despite signs of weakness in housing.
Higher rates make home-buying less affordable and mean fewer borrowers can benefit from refinancing.
Housing starts, which measure groundbreaking on new homes, declined 5.3 percent to a seasonally adjusted annual rate of 1.201 million units in September, the Commerce Department said on Wednesday. Data for August was revised down, showing the housing market had slowed by even more than previously reported.
Trump country has been especially hard hit by the higher rates. Starts in the South, the biggest market for homebuilding, crashed 13.7 percent last month. It’s likely that Hurricane Florence played a role in that steep decline.
But housing starts in the Midwest fell 14 percent, suggesting a broader weakness.
Housing starts in the Northeast and the West rose, with the Northeast posting a 29 percent gain.
Applications for permits were lower as well. In the Midwest, these fell nearly 19 percent. Nationwide, building permits fell 0.6 percent to a rate of 1.241 million units in September.  Since permits are an indication of future building, this is a signal that homebuilding is likely to remain slow.
Home building pulls above its weight in the economy because construction is labor intensive and new home purchases often result in the subsidiary shopping, as homebuyers pick up new appliances, furniture, and even cars when they move in.
The housing market has been a weak spot in an otherwise strong economy, principally because of rising mortgage rates and already elevated home prices. Homebuilder sentiment, however, rebounded in October, suggesting that some of the worst fears for the housing market have eased.

AFP•October 25, 2018
Hyundai Motor reported a 67 percent plunge in third-quarter net profit from the previous year after overseas sales slowed and currency swings hurt its bottom line in emerging markets.
Net profit for July to September was 306 billion won ($268.8 million), while operating profit plummeted 76 percent year-on-year to 288.9 billion won, the firm said in a statement.
"The third quarter was a difficult time due to slowing demand in major markets including the US and concerns over a global trade dispute," said Hyundai, which together with its subsidiary Kia is the world's fifth-largest automaker.
Weakening of the Brazilian and Russian currencies and slowing sales in China also took a toll on Hyundai's bottom line, it said, noting that the Brazilian real lost more than 20 percent against the won in the last 12 months.
The company sold 1.12 million cars worldwide in the third quarter, down 0.5 percent from the same period last year.
It has struggled to stay afloat in China -- the world's largest car market -- as it is increasingly sandwiched between high-end cars from Japan and Germany and cheaper vehicles from homegrown carmakers.
Sales were further hurt by the company's late foray into the Chinese market for sports utility vehicles (SUVs), which have risen in popularity among Chinese consumers.
Hyundai's share price plunged six percent on Thursday to close at 110,000 won on the Seoul stock market.
Posted by The Mexican Invasion & Occupation at 5:05 PM No comments: Links to this post