A real Daniel Plainview thing going on. Photo: Chip Somodevilla/Getty Images
Since he made the abrupt decision allowing Turkey to invade northern Syria earlier this month, President Trump has not appeared to lose any sleep over the catastrophe he helped cause. Hundreds of Kurds have been killed and hundreds of thousands displaced, but the president has dismissed any humanitarian concerns in his usual surreally glib style, comparing the Turks and Kurds to brawling children. He has waved off concerns about ISIS prisoners escaping with the unnerving assurance that most of them were recaptured.
But there is one thing about the chaotic situation that does seem to preoccupy the president: oil. Precious, precious oil. Over the past weeks, through tweets and public statements, he has made it clear that he considers the protection of it a very high priority.

TRUMP on Syria's oil: "We've secured the oil and, therefore, a small number of US Troops will remain in the area. Where they have the oil. And we're going to be protecting it, and we'll be deciding what we're going to do with it in the future." pic.twitter.com/nKgmXS4yRx
— Aaron Rupar (@atrupar) October 23, 2019

CNN reported on Thursday that the U.S. would send tanks and troops to an area of eastern Syria to reinforce Kurdish defenses guarding oil fields there. As The Guardian notes, “It is quite likely it would take more troops to deploy, maintain, supply and protect armoured units in the middle of the eastern Syrian desert than the roughly 1,000 that were in the country before the Turkish invasion.”
The question of why the U.S. has the right to another country’s oil — especially as it is supposedly completely withdrawing from that country — has received surprisingly little attention amid the ongoing disaster in Syria. But the notion that American’s central goal in the Middle East is plunder of natural resources recalls conspiracy theories around the U.S. invasion of Iraq. And Trump’s current obsession with this point recalls his own sentiments about that war (which he falsely claims not to have supported). In 2013, Trump tweeted, “I still can’t believe we left Iraq without the oil.” Axios reported last year that Trump repeatedly floated the ludicrous idea to Iraq’s prime minister that the country should repay the U.S. — in oil — for the favor of having invaded it.
As the Washington Post explains, oil production in Syria has plummeted during the course of its devastating civil war, which began in 2011. But the country is still rich in the resource — that ISIS managed to turn into a moneymaking enterprise when it swept across parts of the country in 2014. The Kurdish force that was until recently backed by the United States still controls oil fields in the northern and eastern parts of the country; in 2018, hundreds of Russian mercenaries and pro-government Syria forces were killed when they clashed with U.S. soldiers and Kurds in an attempt to wrest some of the oil fields away. But it’s not clear whether the Kurdish-controlled fields are currently functional.
On Thursday, Trump tweeted, “Perhaps it is time for the Kurds to start heading to the Oil Region!” — seeming to suggest that the staunch U.S. allies should wholly relocate from the region they’ve fought and died to secure and instead focus their energies on helping the Trump administration out with its narrow interests a little more. This suggestion was reportedly not greeted warmly.

Nevertheless, Trump was at it again on Friday, attempting to justify his unjustifiable foreign-policy blunder by citing the securing of oil fields (and, oh yeah, bringing U.S. troops back home).

....COMING HOME! We were supposed to be there for 30 days - That was 10 years ago. When these pundit fools who have called the Middle East wrong for 20 years ask what we are getting out of the deal, I simply say, THE OIL, AND WE ARE BRINGING OUR SOLDIERS BACK HOME, ISIS SECURED!
— Donald J. Trump (@realDonaldTrump) October 25, 2019

As the Kurds try to regroup amid the death and destruction around them, they can comfort themselves by knowing that the commander-in-chief of their erstwhile ally has his heart in the right place.
Posted by The Mexican Invasion & Occupation at 1:41 PM No comments: Links to this post

MEXICO'S SECOND LARGEST CITY OF LOS ANGELES RELEASES 100 CRIMINAL ILLEGALS EVERY DAY! - 93% OF THE MURDERS IN L.A. ARE BY MEXICANS! - "The state of California is home to more illegal aliens than any other state in the country. Approximately one in five illegal aliens lives in California, Pew reported."

more at this link:


The sanctuary city of Los Angeles, California releases up to 100 criminal illegal aliens back into neighborhoods and communities every day, according to federal immigration officials.

Today, because of the sanctuary policies that are in place, we recieve less than five which means — with all things being equal — there are 70 to 100 criminal aliens hitting the streets of Los Angeles, alone, that is one city within the United States. This is a significant problem that has been overlooked for too long.

California has one of the most expansive sanctuary state laws in the nation. As Breitbart News has reported, California law enforcement officials have refused to turn at least 5,600 criminal illegal aliens over to ICE agents for arrest and deportation. Instead, these illegal aliens were released back into communities.
In one case last year, a 47-year-old illegal alien from El Salvador sought sanctuary in California after being deported from the U.S. six times. In September 2018, the illegal alien was charged with murdering three men — including 39-year-old Steven Cruze Jr. — by beating them to death with a baseball bat.
John Binder is a reporter for Breitbart News. Follow him on Twitter at @JxhnBinder.

Posted by The Mexican Invasion & Occupation at 11:06 AM No comments: Links to this post

NO COUNTING OF THE 40 MILLION ILLEGALS - THEY'RE THE ONES TAKING THE CENSUS!

Census Bureau Confirms Noncitizens To Be Hired For 2020 After Uncertainty 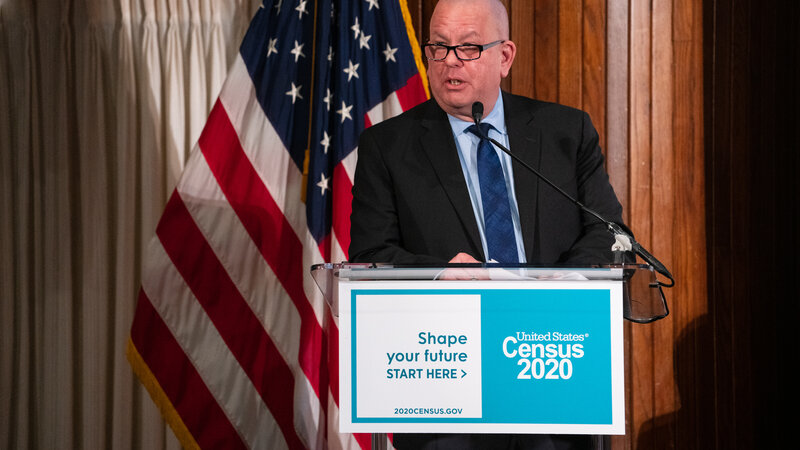 Tim Olson, the Census Bureau's associate director for field operations, says the bureau is trying to recruit job applicants who speak the languages of the neighborhoods where 2020 census workers will be collecting information.
Amr Alfiky/NPR
Updated Oct. 25 at 10:19 a.m. ET
The federal government is widening its recruiting efforts for 2020 census jobs to include certain noncitizens for their non-English language skills, a Census Bureau official announced this week.
In general, Congress does not allow government agencies to hire noncitizens using federal tax dollars, and the Commerce Department, which oversees the bureau, prioritizes U.S. citizens when filling positions. But if a citizen with needed language skills cannot be hired, there are some exceptions that allow for the temporary employment of green card holders applying to become U.S. citizens, refugees or people granted asylum who have declared plans to become green card holders and later citizens, and people born in American Samoa.
"We will employ that flexibility," Tim Olson, the bureau's associate director for field operations, said Tuesday, "and be able to hire noncitizens that are legally entitled to work in the U.S. for language purposes if in fact we do not have a citizen available in our pool."
For the last U.S. census in 2010, the bureau hired close to 3,500 noncitizens with appropriate work visas, who made up less than a half-percent of more than 857,000 temporary workers, according to the agency's internal review of its recruiting and hiring efforts. 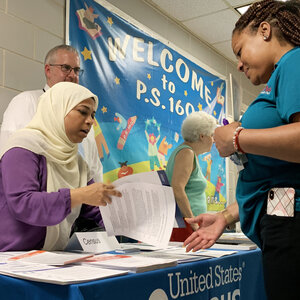 A Half Million 2020 Census Jobs: Will They Be Filled In Time?

Olson made the announcement in response to a question from NPR during a news conference in Phoenix, where the bureau launched a national campaign to recruit 2.7 million job applicants to fill a half million jobs by next spring.
The announcement comes close to two years after The Washington Post reported that Census Bureau staff were informed during an internal meeting that noncitizens would not be hired for the 2020 census. The report generated concerns among census advocates who highlighted the challenge of finding workers during low unemployment.
Ron Jarmin, the bureau's deputy director who was then serving as its acting director, later told NPR, that staffers may have "misinterpreted something that was said in a meeting about the laws on the books." The bureau's public information office has been emphasizing that "there is not a ban" on hiring noncitizens.
Still, the bureau's outreach materials — including a "Frequently Asked Questions" page on the official 2020 census website — currently say only U.S. citizens can work for the national head count. 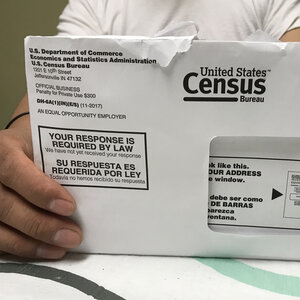 What You Need To Know About The 2020 Census

But in a written statement to NPR, the bureau confirmed that eligible noncitizens could be hired as translators or as enumerators, who will go door-to-door to interview people in households who don't fill out a census form themselves by late spring.
These census workers are expected to play important roles in the federal government's strategy for making sure all U.S. households are included in the once-a-decade, constitutionally mandated count of every person living in the country.
The results are used to determine each state's share of congressional seats and Electoral College votes and to redraw voting districts. They also guide how an estimated $880 billion in federal spending is divvied up every year for schools, roads and other public services.
People who do not speak English fluently are among the groups the bureau is devoting extra attention to in order to ensure a complete count. Federal law prohibits the bureau from releasing information identifying individuals until 72 years after it's collected, but the bureau's research shows that people who are not proficient in English are more likely than those who are to be concerned that their census responses could be used against them. 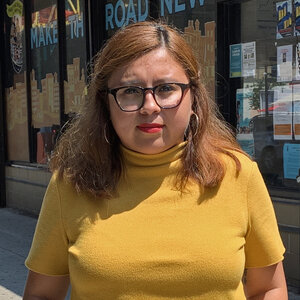 "We need people that speak the languages of the neighborhoods that they're going to work in," Olson said during Tuesday's news conference.
Terry Ao Minnis, senior director of the census program at Asian Americans Advancing Justice - AAJC, said that she was "pleased" to see the bureau acknowledging that hiring census workers of different language abilities is "essential" to a successful count.
"With the high-level of distrust in the government, it is crucial that census takers in communities of color are both culturally and linguistically competent to communicate within our communities," Minnis said in an email.
The heated legal battle over the citizenship question the Trump administration failed to add to 2020 census forms has heightened concerns that many noncitizens have been scared away from participating in the count, let alone considering applying to be a census worker.
So far, the bureau has not hired any noncitizens for the 2020 census.
Some census advocates are anxious for the bureau to take more action in making sure its workers are competent in reaching all kinds of households, regardless of language abilities.
"The Bureau needs to do more than repeat talking points and demonstrate to its partners and stakeholders that it is employing and training that workforce in 2020," Arturo Vargas, CEO of the National Association of Latino Elected and Appointed Officials Educational Fund, said in a written statement.
The bureau says about a fifth of the approximately 900,000 job applicants who have applied for 2020 census jobs are bilingual. In total, they speak more than 400 languages and dialects.
"It's a good start. But we've got a ways to go," Olson, the bureau's head of field operations, said. "If people are bilingual, please, please, please consider applying for these jobs."
Posted by The Mexican Invasion & Occupation at 10:21 AM No comments: Links to this post