Florida’s E-Verify bill will likely push 140,000 illegals out of Florida jobs and make it difficult for employers to hire replacement workers at current wages, says a university study funded by the investors who are trying to block the E-Verify bill.
If “existing undocumented workers were to exit the Florida economy in the number anticipated were E-Verify were [sic] to be adopted, the adequate numbers of native workers would not be available at current wage rates,” says the draft report funded by FWD.us, an advocacy group for billionaire investors, including Mark Zuckerberg.
“This is basically making the case for us that employers are employing illegal workers to keep wages low and to increase their own profits,” said Rosemary Jenks, director of government relations at NumbersUSA. “If they can’t replace those workers at the same [pay] level, then, oh my gosh, then they are going to have to increase wages [for Americans]. … It is exactly what should happen.”
Florida Gov. Ron DeSantis’s (R) proposed E-Verify bill would penalize companies that hire illegals. A narrow version has passed one committee vote, but business groups will try to kill the bill before it can get to DeSantis’s desk.
The biggest winners from the E-Verify bill would be the least paid, least educated workers in the economy, said the study by Rick Harper, an economist formerly at the University of West Florida. “Those are the most likely to be substituted by employers hiring new workers when there is some competition” from illegal workers, wrote Harper, who now works with Triumph Gulf Coast Inc. to invest public funds in Florida.
The law would also help narrow the income gap between the least educated and better educated workers, said the FWD.us report. The current shortage of workers already “has reduced the size of the difference in wages paid to less-educated workers versus well-educated workers … by 6 to 9 percent,” Harper wrote.
Already, President Donald Trump’s zig-zag opposition to corporate migration is forcing companies to raise wages and boost the training of sidelined and unskilled American workers. For example, Fox News described February 13 how Florida’s construction industry is reacting to a claimed shortage of cheap workers by training unskilled Americans:

Dan Kodsi is the C.E.O. and developer of Paramount Miami Worldcenter, the world’s most heavily amenitized luxury residential tower.  It’s currently the biggest private construction project in America. He told us the immigration crackdown “has actually created a void, we have more construction jobs available than we actually have workers.”
…
Paramount Miami Worldcenter is taking full advantage of [federal training] programs, and Kodsi has partnered with the City of Miami to recruit and train hundreds of unemployed workers. The hope is to provide enough construction crews for the Miami area for years to come. “At Miami Worldcenter, we actually have a jobs program,” says Kodsi. “This is a public-private partnership where we created vocational schools where we can take unskilled workers, these workers can come in and gain skills.”

The expanded hiring and training of sidelined Americans has saved construction firms from a real shortage of workers, according to federal pay data. Real shortages are revealed by bidding wars among employers and by rising wages for Americans, but the federal data shows little improvement in wages for construction workers:

The bill makes sense for incumbent politicians because they gain more from rising wages than from happy donors, said Jenks. “They can’t win an election without votes, regardless of how much money they have, and if you can get more voters with fewer campaign dollars, you will win because you have the votes.”
Some business lobbyists admit that rising wages are a boon for politicians. “Are rising wages good for national politics?” Breitbart News asked January 9 during the U.S. Chamber of Commerce’s annual State of American Business event.
“You’re damn right they are,” responded Tom Donohue, CEO of the U.S. Chamber of Commerce, adding:

DeSantis’s support for American employees is helping to push up his polling support before his 2022 reelection, Jenks noted. “I know Democrats in Florida who voted for Dasantis because of his position,” she said.
The same trend is boosting Trump in the 2020 election campaign, she said. “I think we can look at Trump and see the answer to that … he is extremely popular, and this is what he is talking about.”
Business groups often argue that laws against illegal migration will shrink the economy — and government tax revenues — by reducing hiring, consumption, and real estate prices.
But the exclusion of illegals also tends to push up tax receipts, wages, and training for voters, according to studies and statements by independent academics, the National Academies of Science, the Congressional Budget Office, executives, more academics, New York Times reporters, state officials, unions, more business executives, lobbyists, employees, the Wall Street Journal, federal economists, Goldman Sachs, oil drillers, Wall Street analysts, fired professionals, legislators, construction workers, New York Times subscribers, plus Robert Rubin, and even the Bank of Ireland and Sen. Bernie Sanders (I-VT) before 2019:

Bernie Sanders in 2007: I believe we have very serious immigration problems in this country. I think, as you've heard today, sanctions against employers who employ illegal immigrants is virtually nonexistent. Our border is very porous.#Bernie2020 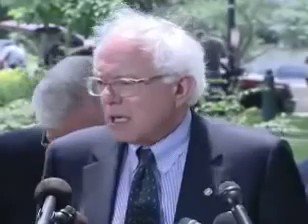 1,979 people are talking about this


The Harper report predicts that the departure of illegals will reduce spending on retailers, food, rents, and housing.
But that loss will be offset by greater spending from Americans, Jenks said. “If you are putting money in illegals’ pockets, they’re likely to spend that money outside of the country — which illegals do. [But Americans] are more likely to spend in the local economy and to rent [an apartment] or buy a place to live, so I don’t see how it would not be a win for Florida.”
Harper’s report for FWD.us includes many references to the rule of supply and demand. The Economics 101 rule predicts that any reduction in the supply of foreign workers will force employers to raise wages for local and legal employees:
“Business that currently employ significant number sof undocumented workers may face increased labor costs,” says the draft report, which is being prepared by FWD.us for publication.
“At a time of tight labor markets and record low unemployment, diminishing the size of the available labor pool will predictably result in negative and costly repercussions for business,” says the 27-page report.
“In today’s tight labor market, it is unlikely that the workforce lost due to the implementation of mandatory E-verify would be replaced without driving up production costs,” according to the report, which was commissioned by FWD.us in November 2019 in response to DeSantis’s push for legislation that would reduce the hiring of illegal migrants.
“It is unlikely that many of the jobs made vacant by undocumented workers departing Florida would be filled at current wages,” said the report by the investor group, which includes many investors with interest in myriad companies, including real estate and transport firms.

Investors are asking judges to block Trump's "Public Charge" immigration reform because it will reduce their revenues from poor migrants.
breitbart.com

61 people are talking about this


Posted by The Mexican Invasion & Occupation at 3:52 PM No comments: