Mexican women have a legal right to U.S. healthcare, and also to birth their children in the United States if they ask for asylum, Democratic Sen. Ron Wyden claimed Saturday.

Wyden’s unilateral extension of Americans’ rights, national healthcare and democratic representation to the nationals of Mexico came when he staged a visit to a shelter for migrants waiting for scheduled asylum hearings in the United States. The shelter is in Juarez, Mexico, and it hosts migrants who were sent back to Mexico under the “Remain in Mexico” program until U.S. judges have time to hear their pleas for asylum.
Wyden made the trip with pro-migration advocates from his home state of Oregon where he is facing a reelection campaign in 2020. The visit is likely intended to boost his election support from white progressives who increasingly favor migrants over many Americans.
The shelter in Mexico included a pregnant couple with a young child. Wyden chose to escort the couple to the border, past the other traffic, past a U.S. border guard, and into the United States. He said via a tweet:

I met a women who is eight and half months pregnant. Because I had a wonderful physician from Oregon, Dr. Herbert, with me, she said that … the woman was looking at some very serious healthcare problems … [that] she needed medical care.  So they immediately packed all their belongings up, headed to the border to make sure she could get to the United States and get the medical care she needed. We were essentially told early on by the customs official [at the border] that ‘No way that she could get in,’ then when they found out I was a U.S. Senator and we had a pediatrician with us, they changed their tune. Now that individual is going to be able to ge the medical care that she so desperately needs.

I went across the border into Juarez, Mexico to tour a shelter housing asylum seekers being forced to stay in Mexico instead of the U.S. while they wait to hear if they've been granted asylum. They are fleeing persecution and violence, seeking a better life for their families. 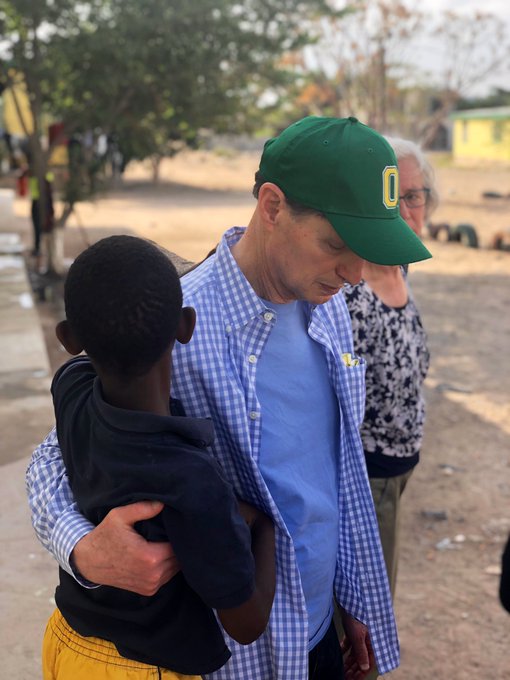 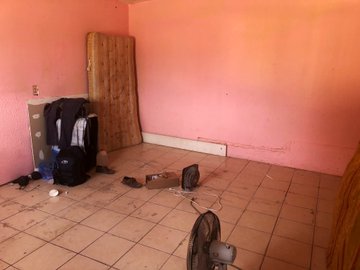 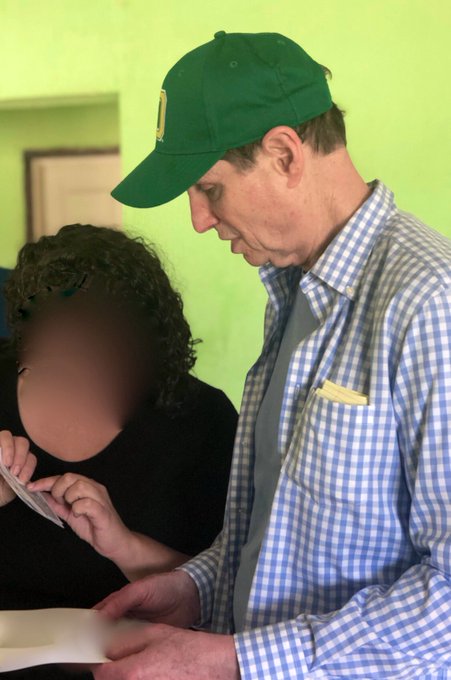 Ron Wyden
✔@RonWyden
While across the border, I met a young woman who was seeking refuge in the U.S., who was more than 8 months pregnant. 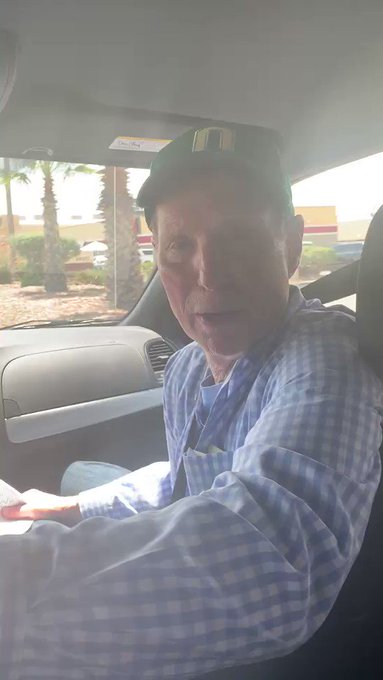 
582 people are talking about this


Wyden was accompanied by a freelance journalist whose account of of the border traffic was posted in the Washington Post:

“These policies that I’ve seen are not what America is about. And in fact what we saw with respect to the woman who is here today is just a blatant violation of U.S. law,” Wyden said, referring to the pregnant woman. He said he believed the CBP agents would have turned away the family if he had not intervened, a sentiment echoed by Taylor Levy, an El Paso immigration attorney who took Wyden and his staff to Juárez.

Wyden says the migrants are fleeing crime and persecution, even though crimes rates have recently dropped in Central America and in Mexico.
But Wyden also justified their migration by saying they are “seeking a better life for their families.” Billions of people in South America, Africa and much of Asia likely would better their lives by moving to the United States.
Many migrants rationally hope to birth their children in the United States. According to a July 24 report by NBC:

TIJUANA, Mexico — A growing number of expectant mothers are among the migrants coming in daily from Honduras, Guatemala, El Salvador — even Haiti — to more than 30 already overflowing shelters in Tijuana, Mexico.
“More women are arriving pregnant or with babies,” said pastor Gustavo Banda of the Embajadores de Jesús (Ambassadors of Jesus) church, which operates a shelter in Cañón del Alacrán (Scorpion’s Canyon) on the outskirts of Tijuana. “We have a lot of Haitian women and some Central American.”
…
These pregnant women are here because the Trump administration’s “Remain in Mexico” program requires some U.S.-bound asylum applicants to register at ports of entry and then return to Mexican border cities to wait as their claims are processed.
It’s a period of great anxiety, if only because many want their children born in the United States.

Wyden’s unnamed Mexican woman is one of roughly 15-million women of child-bearing age in Mexico, while another 50 million such women live in South America.
Wyden’s visit provides political support for the migration advocates who are trying to persuade federal judges to knock down President Donald Trump’s “Remain in Mexico” program. The program is proving effective because it reduces the catch and release of job-seeking migrants, and so it prevents migrants from using U.S. jobs to pay debts to their cartel-linked smugglers.
The cartel’s labor-trafficking business may have earned more than $2.3 billion in 2017, according to a report by the Rand center in California.
Widen’s advocacy for the foreigners reflects the growing emotional fervor among some Democrats for the concerns of foreigners — despite and amid the fears of American voters about wages and salaries, housing prices, medical care, debts, and wealth.
A rising number of Democrats politicians are showing emotional concern for foreign migrants, even as their own constituents try to help their American children and try to rebuild their income and wealth lost during the government-aided economic crash of 2008:

Democrat Sen. Schumer gives thumbs-up to detained illegals, urges all migrants be sent to Catholic Charities, then urges more border loopholes. Yet in NY, employers still are not raising wages to compete for US workers amid the flood of migrant labor. http://bit.ly/30NbwCE

Americans have no moral right to detain migrants, says Sen. Chuck Schumer, who was caught offering a thumbs-up to male illegal migrants.
breitbart.com


23 people are talking about this


Polls reveal that an increasing number of Democratic progressives show emotional solidarity with foreign migrants instead of with Americans and Americans’ laws. This trend has been dubbed “The Great Awokening,” and Breitbart News reported July 6:

Only 70 percent of Democrats say the TV-displayed migration of almost 800,000 men, women, and children into the United States counts as a crisis — and 54 percent of all Democrats say the crisis is caused by the “way migrants are treated” by the federal government.
Only eight percent say the crisis is solely caused by the number of migrants, while a further 7 percent blame both the government and the migrant numbers, even as the migrants flood into Americans’ blue-collar neighborhoods, pushing down wages, boosting rents and adding ore chaotic diversity to schools, communities, and politics.

In a press event at a border detention center, Democratic legislators offer love and aid for foreign migrants, but nothing for Americans -- except a not-subtle threat of government power. I'm not sure that is the best way to win Americans' votes in 2020. http://bit.ly/2Yolfi8

Democrats: Love and Aid for Illegal Migrants, Nothing for Americans

Democrats promised love and aid for illegal migrants -- but offered nothing to ordinary Americans -- during a raucous Monday press conference.
breitbart.com


78 people are talking about this

Despite protestations that they’re “not for open borders,” a 2018 Harris-Harvard poll found that more than 1 in 3 Democrats, 36%, and just under half, 46%, of liberals say they prefer having “open” to “secure borders.” A more recent Rasmussen survey further shows that 65% of Democrats believe that opening “our borders to anyone who wants to come here as long as they are not a terrorist or a criminal” is better for the U.S. than tightly controlling who comes into the country (26%). All told, when you couple the above with opposition among majorities of Democrats to standard immigration-restriction policies and connect the dots, at the very least, it’s hard to make the case that the party is “anti-open borders.” In fact, 49% of the public believes—versus 36% who do not believe—that it is for open borders. And who can really blame them? If public perceptions are mistaken, Democrats have and have had ample opportunity to set the record straight.
…
For Democrats this is becoming the case even when the practical questions relate to matters, like income inequality, that are also important to them. Between a moralized political question and a matter of practical politics, it seems, the moral side will always win. There is ample evidence, for instance, that sustained low-skill immigration harms the livelihoods of low-skilled natives, at least in the short run, and the stability of the economy and welfarestate in the long run. But these sorts of arguments have little power against a moral case increasingly prevalent in elite quarters that advocates an open-borders immigration policy as a form of “reparations” for America’s historical sins.

Here is how a recent New York Times essay put it:

What is good immigration policy for the United States is separate from what is just and moral for the peoples whose destiny America, past and present, has affected. It might make economic sense for the United States to let in more skilled Indians and fewer unskilled Latinos, but America owes them more, and it should open its doors more to its southern neighbors.

Wyden also visited a U.S. detention center where migrants are identified and registered prior to being transferred to facilities run by the Immigration and Customs Enforcement agency. Wyden argued that the migrants should be released into the United States: “What I saw is  a textbook case for why you ought to end the cruel detention of individuals who simply represent no threat to the United States and have fled persecution.”

I’m on my way to tour the Otero ICE facility in New Mexico. I was told by advocates just this morning about flagrant abuses happening at this facility.

I’ll be back in touch soon to tell you what I saw. 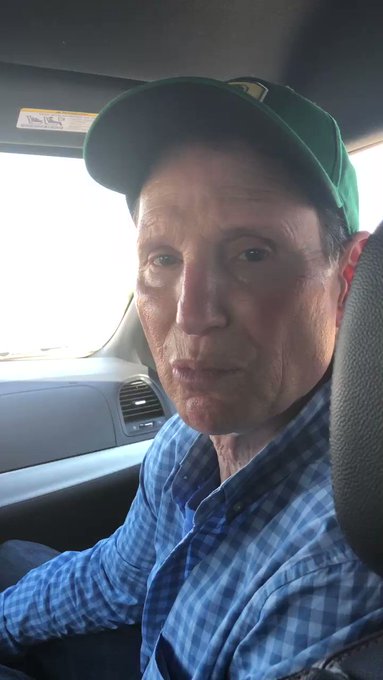 Ron Wyden
✔@RonWyden
What I saw in the Otero ICE facility was heartbreaking. There are 4 detainees on a hunger strike. They have lost all hope that America will help them.

Otero is a textbook case for why the Trump administration must end their cruel detention policies. 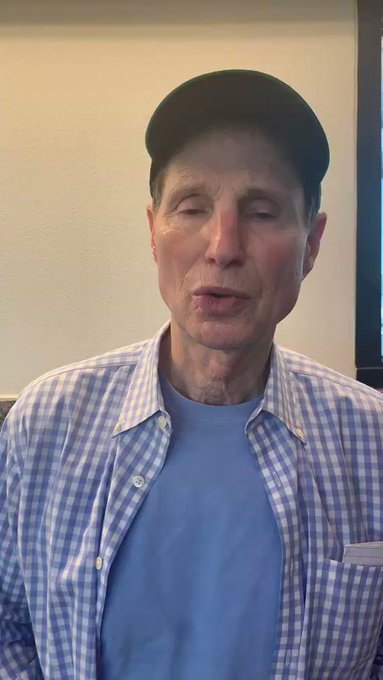 
647 people are talking about this


Immigration Numbers
Each year, roughly four million young Americans join the workforce after graduating from high school or university. This total includes roughly 800,000 Americans who graduate with skilled degrees in business or healthcare, engineering or science, software or statistics.
But the federal government then imports about 1.1 million legal immigrants and refreshes a resident population of roughly 1.5 million white-collar visa workers — including approximately 1 million H-1B workers and spouses —plus roughly 500,000 blue-collar visa workers.
The government also prints out more than one million work permits for foreigners, tolerates about eight million illegal workers, and does not punish companies for employing the hundreds of thousands of illegal migrants who sneak across the border or overstay their legal visas each year.
This policy of inflating the labor supply boosts economic growth for investors because it transfers wages to investors and ensures that employers do not have to compete for American workers by offering higher wages and better working conditions.
This policy of flooding the market with cheap, foreign, white-collar graduates and blue-collar labor also shifts enormous wealth from young employees towards older investors, even as it also widens wealth gaps, reduces high-tech investment, increases state and local tax burdens, and hurts children’s schools and college educations.
The cheap-labor economic strategy also pushes Americans away from high-tech careers and sidelines millions of marginalized Americans, including many who are now struggling with fentanyl addictions. The labor policy also moves business investment and wealth from the heartland to the coastal cities, explodes rents and housing costs, shrivels real estate values in the Midwest, and rewards investors for creating low-tech, labor-intensive workplaces.
“If there is a growing flood of foreign labor, the American middle class is no longer going to exist, and Republicans will not have a constituency,” said Hillarie Gamm, a co-cofounder of the American Workers Coalition.

The government of India is pushing a "country caps" bill that would reward 100,000 Indians per year with green cards if they take U.S. jobs.
breitbart.com


41 people are talking about this

Posted by The Mexican Invasion & Occupation at 4:09 PM No comments: Links to this post