Police in southern California announced on Friday the arrests of two men linked to the Mexican-based Sinaloa Cartel. The men allegedly operated a drug-trafficking cell in Apple Valley, California. The multi-agency investigation also led to the seizure of 500 pounds of methamphetamine worth $1.25 million dollars.

Police from the Alhambra and West Covina Police Departments arrested Manuel Gallardo, 55, of Apple Valley and Daniel Gonzalez, 21, of Ontario, California. The arrests came during a raid on an Apple Valley auto body repair shop on May 15. The rais also resulted in the discovery of 500 pounds of methamphetamine, the seizure of 11 firearms, $38,000 dollars, and 40 grams of fentanyl. The raid grew out of a two-month multi-agency drug investigation. 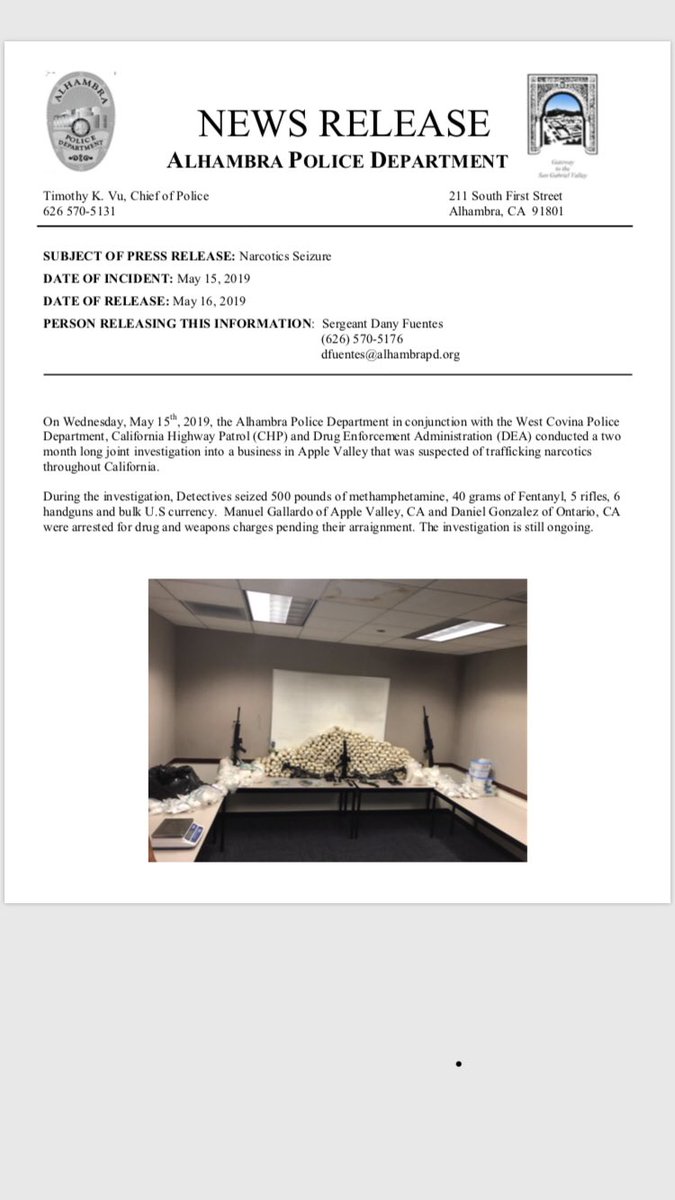 See West Covina Police's other Tweets
Twitter Ads info and privacy
Officials said both suspects are believed to be members of a Sinaloa Cartel-connected U.S.-based drug ring. The two men are charged with possession of methamphetamine with the intent to sell, transport for sale purposes, and possession of methamphetamine while in possession of a firearm. Apple Valley is located in the Victor Valley of San Bernardino County — approximately 90 miles northeast of Los Angeles, California.
The Apple Valley drug-ring is suspected of trafficking drugs across the U.S., according to West Covina police spokesman Travis Tibbetts. It is also believed that drugs being distributed in the San Gabriel Valley were being supplied by the Apple Valley auto repair shop. The business allegedly stored product for eventual distribution, according to Alhambra police spokesman Sergeant Steven Carr as reported by the Pasadena Star-News.
An investigation by the Alhambra and West Covina Police Departments lasting several months led to the current investigation and eventual discovery of the alleged illegal drug activity that landed the two suspects in jail. The California Highway Patrol and the Drug Enforcement Administration (DEA) also participated in the ongoing multi-agency joint investigation.

Robert Arce is a retired Phoenix Police detective with extensive experience working Mexican organized crime and street gangs. Arce has worked in the Balkans, Iraq, Haiti, and recently completed a three-year assignment in Monterrey, Mexico, working out of the Consulate for the United States Department of State, International Narcotics and Law Enforcement Program, where he was the Regional Program Manager for Northeast Mexico (Coahuila, Tamaulipas, Nuevo Leon, Durango, San Luis Potosi, Zacatecas.) You can follow him on Twitter. He can be reached at robertrarce@gmail.com


Posted by The Mexican Invasion & Occupation at 3:54 PM No comments: