THERE ARE MORE THAN 40 MILLION LOOTING MEXICANS IN OUR OPEN BORDERS.... IT IS NOT BY ACCIDENT! CONGRESS HAS HANDED THEM MILLIONS OF OUR JOBS AND BILLIONS IN WELFARE TO KEEP THEM COMING.... IT'S CALLED non-enforcement!

Whom Does Congress Work For?
By John Miano
CIS Immigration Blog, December 12, 2017

“The cost of the Dream Act is far bigger than the Democrats or their media allies admit. Instead of covering 690,000 younger illegals now enrolled in former President Barack Obama’s 2012 “DACA” amnesty, the Dream Act would legalize at least 3.3 million illegals, according to a pro-immigration group, the Migration Policy Institute.”

DACA WITH STOLEN SOCIAL SECURITY NUMBERS…. How many other laws did these Mex flag wavers break?


Giving amnesty to millions of illegal aliens who are covered and eligible for the President Obama-created Deferred Action for Childhood Arrivals (DACA) program would cost American taxpayers a total of $26 billion, according to the Congressional Budget Office (CBO).

The DREAM Act, which is the most expansive amnesty being considered in Congress, would give potentially 3.5 million illegal aliens who are shielded from deportation by DACA and those eligible for DACA a pathway to U.S. citizenship.
Such a plan, the CBO reports, would come with a costly price tag to American taxpayers: 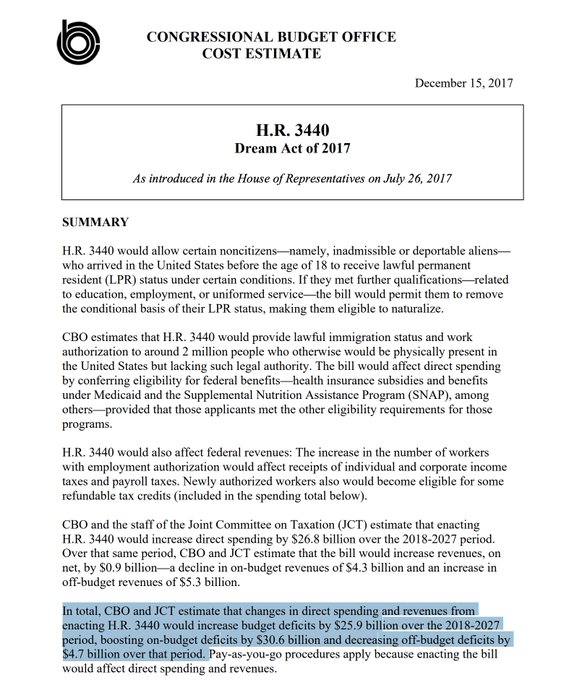 Under the DREAM Act, Americans would have to pay for at least two million illegal aliens who would become eligible for federal entitlement programs such as Medicaid and the Supplemental Nutrition Assistance Program (SNAP), commonly known as “food stamps.”
Newly amnestied illegal aliens under the DREAM Act would also be allowed to receive federal benefits to go to college, costing Americans a billion dollars just between 2018 through 2022, the CBO estimates.

CBO also estimates that providing higher education assistance for newly eligible people under S. 1615 would cost $1.0 billion over the 2018-2022 period; such spending would be subject to the availability of appropriated funds.

Breitbart News analysis conducted by John Carney previously found that the DREAM Act would cost American taxpayers an expensive $115 billion due the newly amnestied illegal aliens being able to receive immediate subsidies from the Affordable Care Act (ACA), also known as “Obamacare.”
The cost of DACA amnesty would be placed on top of the costs that Americans pay every year due to illegal immigration.
As Breitbart News reported, the most recent Federation for American Immigration Reform (FAIR) report reveals that an illegal alien costs the American taxpayer approximately $8,075 each, totaling a burden of roughly $116 billion annually.
Researchers with FAIR said the finding was both a “disturbing and unsustainable trend,” as the cost of illegal immigration to taxpayers has risen nearly $3 billion since 2013, when illegal immigration cost $113 billion.
The study directly challenged research by libertarian think tanks and open borders organizations, which claim that illegal immigrants are net-gains for American taxpayers.
John Binder is a reporter for Breitbart Texas. Follow him on Twitter at @JxhnBinder.

IF YOU THINK THERE IS A JOBS AND HOUSING CRISIS

NEW YORK CITY, New York — The Democrats’ draft Dream Act amnesty would likely add as many chain-migration foreigners to the United States population as are added by the total number of Americans who are born in four years’ time.

As House and Senate Republicans,

have teamed up to push an amnesty for

potentially millions of illegal aliens who are

enrolled and eligible for the President

impact the move would have on Americans

would be likely unprecedented.
Under the current legal immigration system, immigrants who are given a pathway to U.S. citizenship are eventually allowed to bring extended family members, children, their parents, siblings, and extended family members to the country. This process, which makes up more than 70 percent of the current legal immigration, is what’s known as “chain migration.”
Research by the Migration Policy Institute (MPI) reveals that under a DACA amnesty deal, between about 800,000 and 3.5 million illegal aliens could be eligible for legalization to permanently remain in the U.S. Of those, MPI notes that 1.5 million of the estimated 3.5 million would be allowed to obtain U.S. citizenship.
According to Princeton University researchers Stacie Carr and Marta Tienda, newly naturalized Mexican immigrants in the U.S. bring an average of six foreign relatives with them. Therefore, should all 1.5 million amnestied illegal aliens bring six relatives each to the U.S., that would constitute a total chain migration of nine million new foreign nationals entering the U.S.

@JxhnBinder
Imagine if 3.3 million illegal aliens got amnesty
They could bring 6 relatives each to US
That's 19M new people http://www.breitbart.com/big-government/2017/10/03/chain-migration-of-potentially-19m-foreign-nationals-would-follow-amnesty-for-illegal-aliens/ …

Amnesty for illegal aliens would lead to unprecedented chain migration of upwards of 10 million foreign nationals, under current law.
breitbart.com

million this year with no end in sight as legal

immigration reductions to give relief to

America’s working and middle-classes are

stalled in Congress.
Trump has previously stated that an amnesty deal for DACA illegal aliens would have to include an end on chain migration in order to stop surges of legal immigration to the U.S., though it remains unclear how many Republicans would be willing to break from their big business donors to help pass a law to end chain migration.
Most recently, a group of Senators released legislation known as the SECURE Act that would end chain migration — thus reducing legal immigration to 500,000 admissions a year to give relief to Americans — but couples the pro-American immigration reform with an amnesty for DACA illegal aliens.
Nearly 120,000 foreign nationals have been allowed to enter the U.S. since 2005, despite coming from countries designated as state-sponsors of terrorism, including Iran, Syria and Sudan, Breitbart News reported.

Nearly 120,000 foreign nationals have been allowed to enter the US since 2005 despite coming from state-sponsors of terrorism.
breitbart.com

Twitter Ads info and privacy
In total, about 9.3 million foreign nationals have entered the U.S. since 2005 because of chain migration, making it the largest driver of legal immigration to the country.
As Breitbart News reported, chain migration makes up more than 70 percent of all legal immigration — with every two new immigrants bringing seven foreign relatives with them.
John Binder is a reporter for Breitbart News. Follow him on Twitter at @JxhnBinder.

The Democratic Party used to be the party of blue collar

America- supporting laws and policies that benefited that

segment of the U.S. population.  Their leaders may still claim

to be advocates for American working families, however their

duplicitous actions that betray American workers and their

safety, provide clear and incontrovertible evidence of their

Study Shows E-Verify's Effectiveness
By Preston Huennekens
CIS Immigration Blog, December 8, 2017
Their study indicates that E-Verify is one of the most important enforcement tools available to states that wish to reduce their illegal alien populations. Research shows that most illegal migration is for economic reasons, and that the adoption of E-Verify and other worksite enforcement measures effectively blocks illegal aliens from procuring employment, thereby preventing many from settling down in the United States. Faced with mandatory E-Verify, the study shows that many aliens either returned to their home countries or traveled to other states that did not have employment verification regulations.
. . .
https://cis.org/Huennekens/Study-Shows-EVerifys-Effectiveness

AMERICA: AN OPEN BORDERS NATION WHERE ILLEGALS HAVE MORE RIGHTS THAN LEGALS

“I have seen and heard a lot over the past two weeks,” he writes. “I met with many people barely surviving on Skid Row in Los Angeles, I witnessed a San Francisco police officer telling a group of homeless people to move on but having no answer when asked where they could move to, I heard how thousands of poor people get minor infraction notices which seem to be intentionally designed to quickly explode into unpayable debt, incarceration, and the replenishment of municipal coffers, I saw sewage-filled yards in states where governments don’t consider sanitation facilities to be their responsibility, I saw people who had lost all of their teeth because adult dental care is not covered by the vast majority of programs available to the very poor, I heard about soaring death rates and family and community destruction wrought by prescription and other drug addiction, and I met with people in the South of Puerto Rico living next to a mountain of completely unprotected coal ash which rains down upon them, bringing illness, disability and death.”

The United States of Inequality

Last week, as Congress rushed to pass a tax bill that will transfer trillions of dollars to the financial oligarchy, two separate teams of experts published damning reports documenting the growth of social inequality in the United States.
On Thursday, a group of leading inequality researchers, including Thomas Piketty, Emmanuel Saez and Gabriel Zucman, published its 2018 World Inequality Report, which shows that the United States is far more unequal than the advanced economies of Western Europe, as well as much of the rest of the world. Posted by The Mexican Invasion & Occupation at 2:10 PM