Criticism surrounding Chicago Mayor Rahm Emanuel’s role in the violence that has gripped the city that just last weekend saw 72 people shot–12 fatally–includes a black pastor who said Emanuel is responsible because he has “neglected” and “oppressed” people who live in crime-ridden neighborhoods.

Rev. Ira Acree, pastor of the Greater St. John Bible Church on Chicago’s West Side, was interviewed on National Public Radio’s (NPR) Morning Edition on Thursday. Host Rachel Martin played a clip of Emanuel at a press conference saying there are too many guns on the street and a lack of values.
“I am taken aback by the arrogance of this mayor,” Acree said. “In the midst of a crazy, horrifying week of violence, he blames the victim.”
“He’s talking about values,” Acree said. “He needs to consider the fact when he closed 50 schools in black and brown neighborhoods, that was a statement of his values.”
“When he closed mental health institutes, that was a statement of his values,” Acree said. “When he sits on a half a billion dollars of HUD money, and we have homeless people in Chicago, that’s a statement of his values.”
“He needs to take ownership and begin to stop his neglect of an entire side of town,” Acree said.
Martin tried to defend Emanuel, who was also treated kindly by the left wing, taxpayer-funded NPR when he was former President Barack Obama’s chief of staff.
“Well, as you know, he would paint it differently,” Martin said, adding:

He would say that this is a priority for him, and what he is suggesting is that he needs help from people like you, from people who live in these neighborhoods, to call out the crimes, not just call when the crime happens and report the crime but to report the criminal, the perpetrator, if they know who it is.

“Is that a problem?” Martin asked.
Acree answered that Chicago is a “tale of two cities.”
“Just this same weekend, one Chicago’s enjoying outdoor meals and watching shows and attending Lollapalooza while another one is being shot down, filling up trauma centers and preparing funeral arrangements,” Acree said. “Of course we have these conditions that he has helped expand the disparity on.”
Martin again came to Emanuel’s defense, stating the violence pre-dates the mayor’s tenure.
“It does,” Acree said. “But while the violence has gone down all across the country in the last couple of years, unfortunately, it has not been duplicated here in Chicago at the same percentage – still has not.”
Acree finally confronted Martin and had his say about Emanuel.
“I cannot take him serious because for 7 1/2 years he has neglected us,” Acree said. “He has oppressed us. He has disinvested in us.”
“So what guidance do you give your parishioners? I mean, when people come to you and are clearly suffering an emotional toll because of all this violence who have – which has taken so many loved ones from people, do you just say…”
“We walk by faith. We walk by faith. You know, we trust in God,” Acree said. He continued:

And we also know what the Scripture says – without a vision, people perish. And even though this mayor does not have a vision that has inclusivity for us, we must have a vision for ourselves. We must pull ourselves up from our own bootstraps and keep persevering forward.

Martin then asked if, beyond faith, Acree had any practical advice for his parishioners.
“Yeah, we can vote out these politicians that don’t have any interest for us, who just want our support on Election Day and then support other communities afterwards,” Acree said.
President Donald Trump also criticized Emanuel on Thursday while at a meeting in New Jersey about prison reform.
“I guess you have to take it from the leadership,” Trump said. “It’s called bad leadership.”
At a press conference and on Twitter, Emanuel said everyone in Chicago has a responsibility to end the violence in the city.
“Today we have a heavy heart, and our souls are burdened,” Emanuel said. “We are a better city than what we saw this weekend. We as a city, in every corner of Chicago, have a responsibility”: 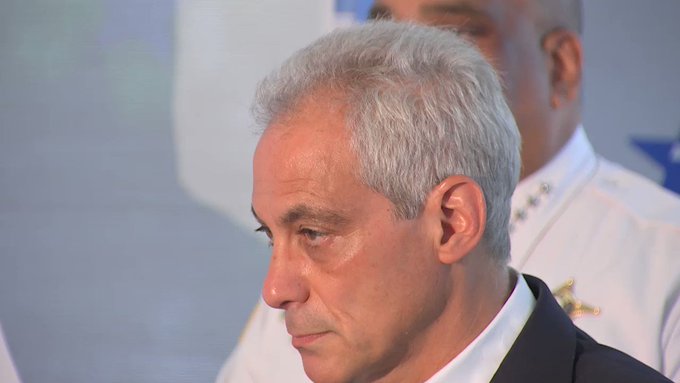 Today we have a heavy heart and our souls are burdened. We are a better city than what we saw this weekend. We as a city, in every corner of Chicago, have a responsibility.

You can help. If you have info, submit a tip anonymously here or text to 274637: https://home.chicagopolice.org/community/crime-prevention/tipsubmit/ …

"Obama’s presidential papers will not be housed there, and no scholars will be afforded the opportunity to explore the history of his presidency."

By Thomas Lifson
The Obama Presidential Center planned for Chicago is nothing more than a personal monument to Barack Obama and a center for political indoctrination in his radical views. It serves no public purpose the way that a presidential library would.  Obama’s presidential papers will not be housed there, and no scholars will be afforded the opportunity to explore the history of his presidency.
And, this is receiving vast public subsidies, despite assurances that it would be privately funded.  Barack and Michelle Obama have been playing a major role in its design, in a fashion reminiscent of a dictator putting up monuments to himself in some third world country. As the revised design stands, it will look like a cenotaph bizarrely erected before the death and burial of its principal.

I have written several pieces about the folly of the OPC. But I am delighted to be joined in this by the Wall Street Journal.  In an article there, Mark Glennon challenges the vast subsidies that all American taxpayers will be affording this personal and political endeavor:

Illinois taxpayers will put up at least $174 million for roadway and transit reconfigurations needed to accommodate the Obama Center. If you don’t live in Illinois, you may be smirking—but you’ll be footing the bill, too. Eighty percent of such spending is generally reimbursed by the federal government, and Illinois officials confirmed to me that they expect to receive $139 million from Washington if they request it.

In a 2014 request for proposal, the Obama Foundation said that the planned presidential library “will include an Institute that will enhance the pursuit of the President’s initiatives beyond 2017.” This institute now seems to have taken over the project. As the Chicago Tribune reported in February: “Obama said he envisions his center as a place where young people from around the world can meet each other, get training and prepare to become the next generation of leaders.” No doubt, his definition of “leaders” will be political.
Which raises the question of why the state and city are giving the Obama Center official support. Back when it was still being sold as an official presidential library, the city of Chicago took steps to allow the project to be built in Jackson Park. Under a deal approved by the City Council in May, the Obama Foundation will lease 19.3 acres in perpetuity for $1.

One dollar for perpetual use of a huge amount of priceless lakefront land.
Fortunately, this is not going to happen without a legal challenge:

A nonprofit group called Protect our Parks has filed a federal lawsuit alleging that this violates state law. The suit calls the Obama Center a “bait and switch,” since the “public purpose” of a presidential library no longer exists.

I am proud to report that my work was cited in that lawsuit.
Promises made, promises broken

Last fall WTTW, a Chicago public television station, was reporting skeptically on “preliminary plans” for Illinois to cough up $100 million to “assist” the Obama Center: “How could a public financing proposal fly in a state that is bleeding red ink, especially when the Obamas have promised 100 percent private funding?”

The Obama Foundation responds that no public money will flow into its coffers (the tax deductibility of donations is another matter). But a hundred and seenty-four million taxpayer dollars spent on construction specifically designed for the facility is a subsidy, period.
Hat tip: Michael Nadler


Police data obtained by the Chicago Tribune after an open records request shows that almost 33,000 Chicago juveniles have been arrested over the past two decades and identified as gang members.
The data is controversial. Activists say that too many young people are misidentified as gang members and are forced to carry that designation all through their lives. But police defend the data, saying it assists them in fighting the war against gangs, who have unleashed an unprecedented level of violence in the city.

The records released to the Tribune through a Freedom of Information Act request included 20 years of arrest data in all for adults as well as juveniles, giving a glimpse at how the department gathers and stores information on the tens of thousands it says have been gang-affiliated.
It’s a controversial practice that has led to an ongoing audit by the city’s Office of Inspector General, a federal lawsuit against the city and a proposed city ordinance to limit its impact.
Critics and experts say that the gang labels are often too easily attached, racially skewed and out of date, yet the harm can be lasting when the Police Department shares flawed gang intelligence with other law enforcement agencies such as immigration officials. It can also be a damaging label during criminal investigations or at sentencings.
While the department released adult gang records to the newspaper in April, it had refused to provide similar data on juveniles, citing privacy laws. After the Tribune appealed to the Illinois attorney general’s office for the juvenile records, though, the department’s Bureau of Technical Services released a new set of data.
The department said its most recent search took a more thorough look at arrest data, but it still didn’t capture everyone labeled a gang member by Chicago police because it excluded street stops that didn’t result in arrests. That means the department could have far more than 33,000 juveniles listed as gang members in its databases.

Gang members are usually members for life - or death - so the value of this database should be immediately clear to anyone concerned about gang violence. Tracking the rise of juvenile offenders to gang kingpins makes it easier to track offenders, gather intelligence, and arrest perpetrators.
There are almost certainly mistakes in the database. But anyone who has been misidentified is not likely to lose employment or be denied entrance to a school because the data isn't publicly available. Only if someone is suspected of committing a crime will the database be employed.
The point being, there are very few "innocent" people in that database. If you avoid getting arrested, the records won't come into play.
The idea that the data is "racially skewed" is absurd. Nothing is skewed when the arrests or police stops occur in neighborhoods where there a few to no white faces. Bringing up race is a typical distraction used by activists that makes it appear as if they want to obstruct the police in their efforts to crack down on gangs.
It's frightening to contemplate that despite the database, gang violence is way out of control, making the city a shooting
Posted by The Mexican Invasion & Occupation at 11:32 AM