Unable to revive her faltering presidential campaign and desperate to find some sort of gimmick more effective than claiming to have been saved from segregated schools by bussing (in Berkeley, California! - yeah, right), Kamala Harris is now seeking to have President Trump kicked off Twitter, so that he cannot speak so directly to the American people on a widely available public forum.
Appearing on CNN, that’s what she said:

"There's plenty of…evidence to suggest that he is irresponsible with his words in a way that could result in harm…so the privilege of using those words in that way should probably be taken from him." 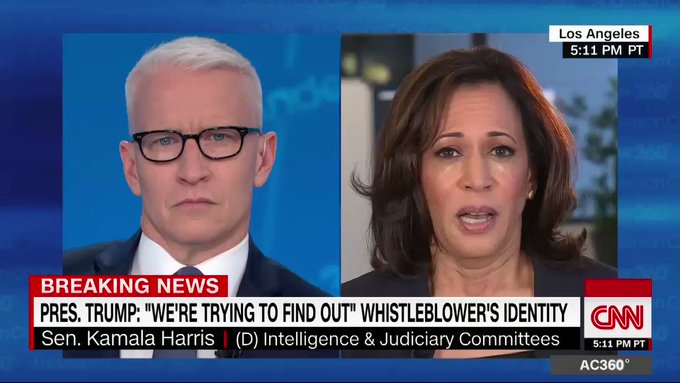 2,412 people are talking about this

Later, she cajoled her constituent, Twitter head Jack Dorsey, to shit down the President of the United States:


Donald J. Trump
✔@realDonaldTrump
As I learn more and more each day, I am coming to the conclusion that what is taking place is not an impeachment, it is a COUP, intended to take away the Power of the....

14.4K people are talking about this

This amounts to a confession that her side of the political divide can’t win arguments unless the other side is silenced. This is shameful, and should be repudiated by the other candidates, but it won’t. They probably share her panic and her response. Moreover, there is no big advantage to be had by attacking her, since her campaign is going nowhere, despite a kickoff rally that featured an impressive turnout and a third quarter fundraising total of $11.8 million, down onlu slightly from her second quarter total.
Senator Harris’s political career is unraveling under the scrutiny a presidential campaign brings. People see her for the ruthless, unprincipled, pathologically ambitious pol that she is. Sleeping with Willie Brown can only take one so far in politics, especially after dumping him.
Photo credit: Twitter video screen grab


David Daleiden: ‘Kamala Harris Is the Greatest Threat to Civil Rights’ in Generations

“Kamala Harris is the greatest threat to civil rights [and] our constitutional natural rights … that we’ve seen in our country in generations,” said David Daleiden, founder of the Center for Medical Progress (CMP), in a Tuesday interview on SiriusXM’s Breitbart News Tonight with hosts Rebecca Mansour and Joel Pollak.

Posted by The Mexican Invasion & Occupation at 7:50 AM