OPRAH TO CAMPAIGN FOR OPEN BORDERS ADVOCATE LA RAZA DEM STACEY ABRAMS..... She also campaigned for a psychopath named Barack Obama who did nada for Black Americans during the 8 years he ran his bankster regime

This comes on the heels of Oprah Winfrey’s visit to the state on Abrams behalf where she said the Democrat refuses to allow the sacrifices of those who were “lynched” and “oppressed” to be “in vain.”

The photos show the men, dressed all in black, with the Black Panther logo on their clothing and holding weapons.
Abrams opponent, Republican Georgia Secretary of State Brian Kemp, will be the focus of a rally today in Georgia where President Donald Trump will be stumping on his behalf.
Ryan Mahoney, Kemp for Governor spokesman, has no doubt about the origin of the images. He said:

It’s no surprise that militant Black Panthers are armed and patrolling the streets of Georgia for Stacey Abrams. The Black Panthers are a radical hate group with a racist and anti-semitic agenda. They are dangerous and encourage violence against our men and women in uniform. Stacey Abrams should immediately denounce the Black Panthers and their hateful record of racism. She should stand against and condemn their attempts to intimidate hardworking Georgia voters just days before the election. 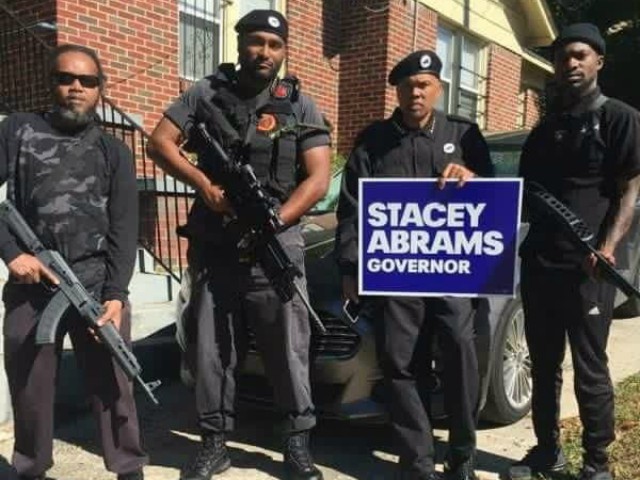 The Georgia governor’s race is one of the most closely watched campaigns in the nation and is attracting top surrogates from both parties in the final days before the election. Vice President Mike Pence stumped for Kemp earlier Thursday, while President Donald Trump will be in the state this weekend. “I heard Oprah is in town today,” Pence said at today’s rally. “I heard Will Ferrell was going door-to-door the other day. I’d like to remind Stacey and Oprah and Will Ferrell, I’m kind of a big deal, too.”

Real Clear Politics poll tracking shows Kemp up by one point and labels the contest a “toss-up.”
Follow Penny Starr on Twitter

Entertainment mogul Oprah Winfrey will travel to Georgia this week to campaign on behalf of the state’s Democratic gubernatorial candidate Stacey Abrams, according to reports.

BuzzFeed News says Winfrey will hold two town hall events with Abrams in DeKalb County and Cobb County on November 1, and then go door to door to pushing residents to vote early in the Peach State.
“I am honored to have Oprah join me for uplifting and honest conversations with voters about the clear choice before us in this election and the boundless potential of Georgians,” Abrams told BuzzFeed News.
Winfrey has increased her public political stances since delivering a politically charged speech in January at the 75th annual Golden Globes. In February, she joined Steven Spielberg, Jeffrey Katzenberg, and George and Amal Clooney in pledging $500,000 to the student gun control “March for Our Lives.”
Oprah Winfey isn’t the only major figure to boost Abrams, who is locked in a tight race against her Republican rival George Secretary of State Brian Kemp. One day after Winfrey’s appearances, former President Barack Obama will lead a get-out-the-vote event for Abrams at Forbes Arena at Morehouse College. Last week, Actor and former Saturday Night Live cast member Will Ferrell canvased for Abrams at Kennesaw State University to recruit volunteers for the Democrat’s campaign.
A Fox 5-Atlanta poll published Tuesday shows the Democratic gubernatorial candidate in a statistical tie with Kemp, while the Cook Political Report is characterizing the race as a “toss-up.”
President Trump is slated to visit Macon on Sunday to campaign for Kemp, while Vice President Pence will rally alongside the Republican gubernatorial candidate at three events this Thursday.

Who ultimately really pays for all the true cost of all that "cheap" labor?
THE DEVASTATING COST OF MEXICO’S WELFARE STATE IN AMERICA’S OPEN BORDERS

“The Democrats had abandoned their working-class base to chase what they pretended was a racial group when what they were actually chasing was the momentum of unlimited migration”.  DANIEL GREENFIELD / FRONT PAGE MAGAZINE

We must keep the hordes jumping our borders to keep wages depressed!

THE DEMOCRAT PARTY’S WAR ON AMERICA’S LEGAL WORKERS, BORDERS AND LAWS as they build the LA RAZA welfare state on our backs.

One in every eleven persons born in Mexico has gone to the U.S. The National Review reported that in 2014 $1.87 billion was spent on incarcerating illegal immigrant criminals….Now add hundreds of billions for welfare and remittances!  MICHAEL BARGO, Jr…… for the AMERICAN THINKER.COM

"Chairman of the DNC Keith Ellison was even spotted wearing a shirt stating, "I don't believe in borders" written in Spanish.

According to a new CBS news poll, 63 percent of Americans in competitive congressional districts think those crossing illegally should be immediately deported or arrested.  This is undoubtedly contrary to the views expressed by the Democratic Party.

Their endgame is open borders, which has become evident over the last eight years.  Don't for one second let them convince you otherwise." Evan Berryhill Twitter @EvBerryhill.

Posted by The Mexican Invasion & Occupation at 8:01 AM